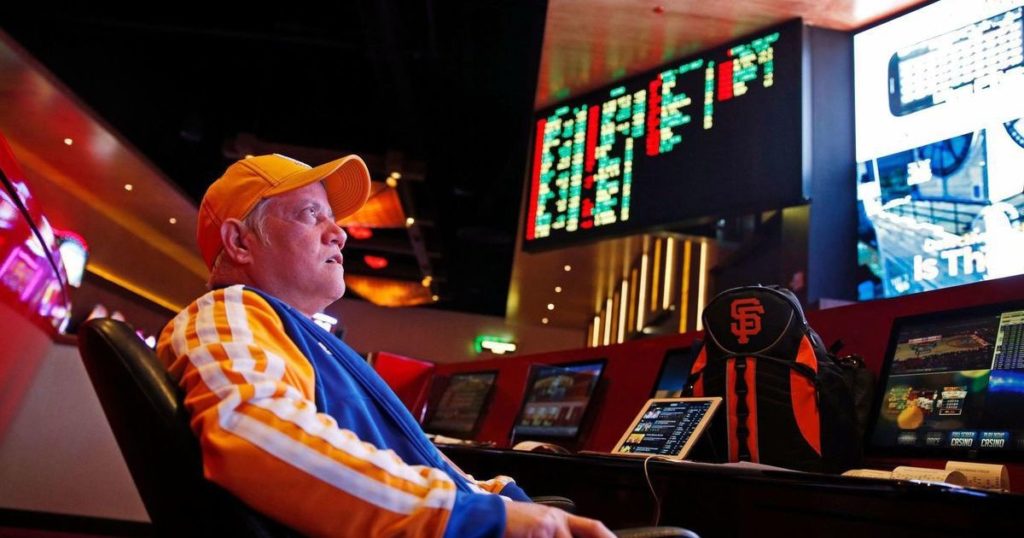 Californians would be able to legally bet on Lakers, Dodgers and Rams games at tribal casinos and horse-racing tracks under an initiative that qualified Thursday for the November 2022 ballot, touching off what is expected to be an expensive battle with excluded card clubs over who should benefit from the potential billion-dollar market.

The constitutional amendment to allow sports betting was written by Native American tribes that showed their political might in 2008 when they spent $115 million to win approval of four ballot measures that preserved an expansion of gambling they had been granted a year earlier.

“This is an important step toward giving Californians the opportunity to participate in sports wagering while also establishing safeguards and protections against underage gambling,” said Mark Macarro, tribal chairman of the Pechanga Band of Luiseño Indians, one of the 18 tribes that are part of the Coalition to Authorize Regulated Sports Wagering behind the ballot measure.

On the other side, card clubs left out from a share of the sports wagering are expected to spend a significant amount of money to oppose the new ballot measure, which they have referred to as an attempt to monopolize the gaming industry. The campaign committee called “No on the Gambling Power Grab” reported raising more than $1 million in cash contributions last year.

“This initiative does nothing to advance sports wagering, and instead expands the tribal casinos’ tax-free monopoly on gaming and rewards those operators for prioritizing their own wealth over public health and safety,” said Kyle Kirkland, president of the California Gaming Assn.

California is late to the game. Three years after the U.S. Supreme Court removed legal barriers to states allowing sports betting, wagering on football, baseball, basketball and other sports has been legalized in 26 states, including New York, New Jersey, Michigan and Oregon. In November, it was approved in Louisiana, Maryland and South Dakota.

The stakes are especially high in California as voters decide whether to allow sports wagering, said Chris Grove, a managing director for Eilers and Krejcik Gaming, a research firm that has advised state lawmakers on the issue.

Legalization could bring California some $1 billion in gross annual revenue without online betting — as the tribal initiative proposes — and $3 billion if the state expanded it to include online wagering, Grove estimated.

The state Legislative Analyst’s Office said the initiative would create new expenses to regulate sports betting but also a flood of cash for state coffers.

“The magnitude of the increase in state revenues is uncertain, but could reach the tens of millions of dollars annually,” the LAO concluded in a financial analysis of the proposal.

The market could generate up to $500 million in tax revenue annually for the state, officials have estimated.

Legalization is already paying off in other states. The states that have legal sports betting operations reported $54 billion wagered from June 2018 to May 2021, generating $3.2 billion in revenue and $534 million in taxes and revenue sharing with government agencies, according to Legal Sports Report, a news site on the sports betting industry.

Pennsylvania has seen the largest taxes and fees generated — $134 million — followed by New Jersey with $132 million and Nevada with $61 million, the news site reported.

In California, the coalition of 18 tribes submitted 1.4 million signatures in October, and on Thursday the secretary of state reported that counties have verified more than 1 million needed to qualify the ballot measure that would amend the state Constitution.

The petition drive succeeded despite state restrictions on social distancing aimed at reducing the spread of COVID-19 since March 2020, but it received an assist from a judge who extended the deadline for collecting signatures to account for the disruption.

The drive was launched after the tribes successfully opposed state legislation last year that would have more broadly allowed sports betting, including in non-tribal card clubs and state-sanctioned sites on the internet.

Grove said the odds remain long on the Legislature reaching agreement with the various interested groups on a plan to allow sports wagering online.

“Online betting is a contentious issue, and finding stakeholder consensus will continue to be a difficult task,” he said.

Under the constitutional amendment, sports betting would only be allowed in person at tribal gaming casinos and state-licensed racetracks and only by people 21 and older.

Bets would be allowed on professional, out-of-state college or amateur sport events, but wagering would be prohibited on high school athletic contests as well as any sporting event in which any California college team participates.

The measure would impose a 10% tax on gross gaming revenues derived from sports wagering at racetracks, with the money going to public safety, mental health programs, education and regulatory costs. Tribal casinos would provide the state with a share of revenue to at least cover regulatory costs subject to negotiations with the governor.

The measure would also allow craps and roulette at Native American casinos.

The sports betting initiative is supported by the California Thoroughbred Breeders Assn., according to spokeswoman Robyn Black, who said it will help racetracks be more financially successful.

“I think it will help keep jobs in California for brick-and-mortar businesses as opposed to just massively opening up the internet” to sports betting, she said.

A 1933 constitutional amendment authorized wagering on the live sport of horse racing, the only sports betting allowed so far, noted Justin Fanslau, a representative for the tracks.

California voters have approved legalized gambling three other times: through the creation of a statewide lottery in 1984, then by authorizing tribal casino operations with ballot measures approved in 1998 and 2000.

In 2008, gambling interests and others spent $154 million battling over the expansion of wagering at Native American casinos, the third-highest amount spent on California initiative campaigns in the state’s history.

Four Native American tribes in Southern California spent $115 million to support the state ballot measures that preserved the expansion of gambling they had been granted a year before.

In that contest, the Pechanga Band of Luiseño Indians spent $46 million, the Morongo Band of Mission Indians put up $42 million, the Agua Caliente Band of Cahuilla Indians spent more than $20 million and the Sycuan Band of the Kumeyaay Nation put in $6 million. Those four tribes and 14 others are behind the proposed new constitutional amendment.

So far, the tribal coalition has spent more than $11 million to collect signatures to qualify the ballot measure.

In addition to the more than 50 non-tribal card clubs represented by the California Gaming Assn., the ballot measure is also likely to be opposed by the California Coalition Against Gambling Expansion, although the group’s board has not yet taken a position.

“It’s an expansion of gambling and we just believe that gambling is a predatory industry that does not improve communities,” said Fred Jones, the group’s attorney.