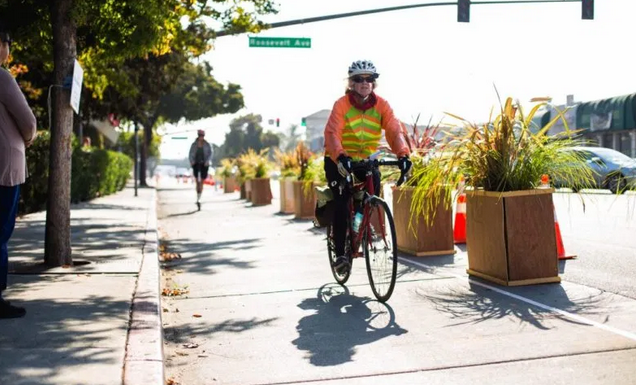 The California Transportation Commission released its annual report to the legislature, describing $22 billion in transportation investments approved this year, for more than 1,200 projects.

About forty percent of those funds came from the Road Repair and Accountability Act of 2017, known as S.B. 1, which increased the gas tax. According to CTC Deputy Director of Finance and Legislation Paul Golaszewski, who presented the report at a webinar this morning, less driving because of COVID stay-home orders has led to a decrease in gas tax revenues to the tune of about $1.9 billion for the last fiscal year and this one, combined. This will have no impact on projects that are already underway, he said, but will mean less revenue in the future.

The annual report includes recommendations for the legislature to consider taking on during its upcoming session. Among them is a call to increase the amount of funding for the Active Transportation Program, which has consistently seen requests for funding that far exceed the amount of money available. For the upcoming cycle, for example, requests for project funding come to five times the amount available.

Golaszewski said that staff had been hearing concerns from ATP applicants who are feeling discouraged, since they have applied multiple times without success.

The report recommends that the legislature find a way to increase funding for the ATP, which funds “projects to increase and make safer active modes of transportation, such as biking and walking, while also advancing regional greenhouse gas reduction goals; enhancing public health; and benefitting disadvantaged communities and many types of users.”

Total annual funding for the ATP is about $220 million, with most from the State Highway Account and about $100 million from S.B. 1.

The legislature could increase the amount going to the ATP from these sources, or consider using cap-and-trade funds. This wouldn’t be the first time: in 2017, the state made a one-time augmentation from cap-and-trade of about $10 million to the ATP. Golaszewski pointed out that “there is a clear nexus between active transportation and reducing greenhouse gas emissions,” which any program funded by cap-and-trade must do.

Other CTC staff recommendations for the legislature include some leftovers from last year’s shortened session, including A.B. 1992 from Laura Friedman (D-Glendale), which called for the California Transportation Plan to address climate change; A.B 2310 from Tom Daly (D-Anaheim), which would have allocated interest that isaccumulating in various state highway accounts to the State Highway Operations and Protection Program (SHOPP); and S.B. 1283 from now-retired Senator Jim Beall (D-Campbell), which would have expanded an existing pilot program allowing buses to drive on the shoulders of certain highways.

For the upcoming session, staff also recommends the legislature consider:

The CTC annual report also summarizes discussions the commission has had on equity, telework, transit, and other topics, and highlights some of the projects it funded during 2020.

Consider donating to Streetsblog California’s end of year campaign. Thank you for your support!