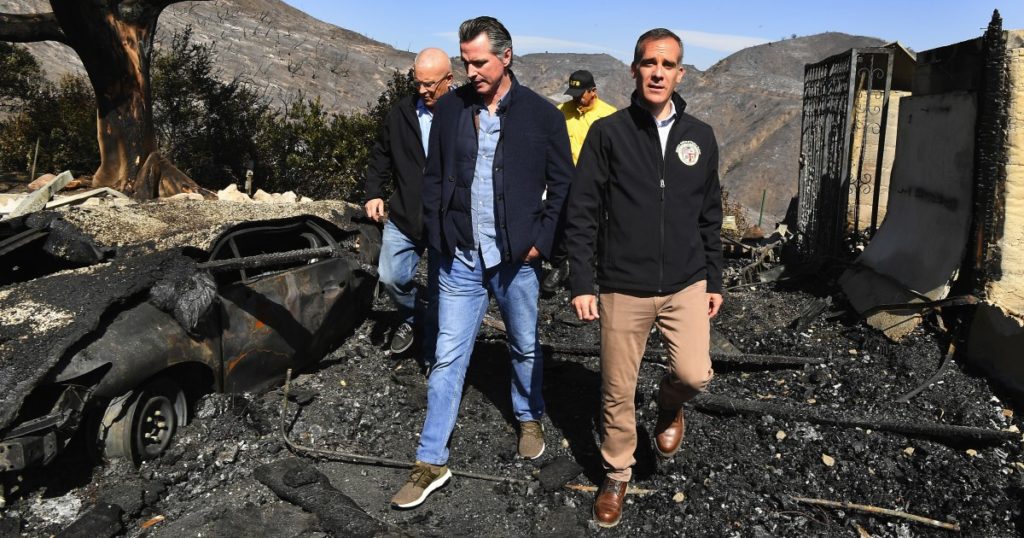 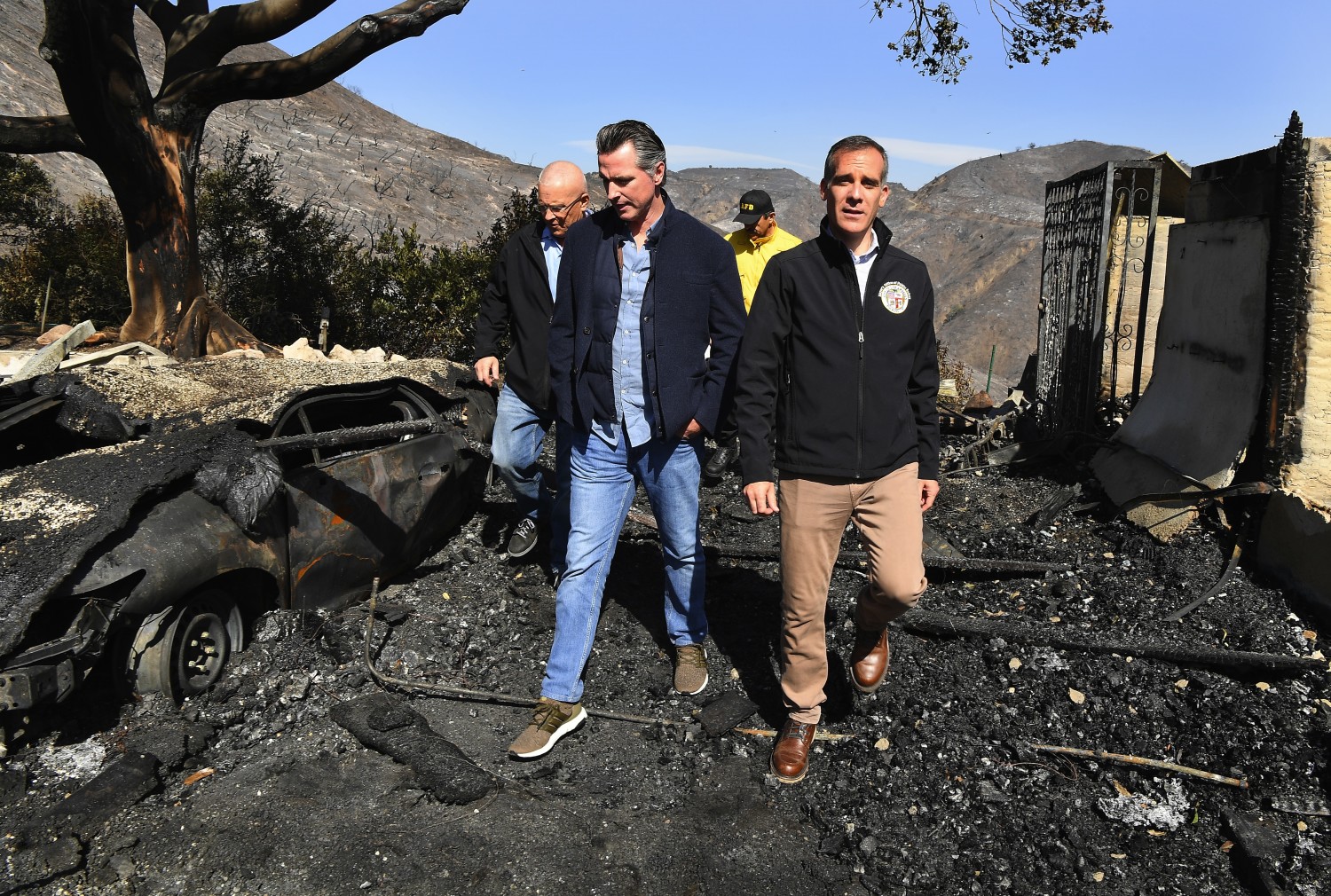 Each time the power goes out, frustrated Californians look for someone to blame.

That could spell trouble for Gov. Gavin Newsom, who will appear on a recall ballot during another hot and dry season and as California voters brace for electricity outages around the state.

“It could be a major issue,” said Dave Gilliard, one of the Republican strategists leading the effort to recall Newsom. “People will ultimately hold him responsible for the state of California, and if they can’t turn their lights on right around the time they’re voting, they’re going to be thinking about that.”

The state’s three largest investor-owned utilities expect to de-energize hundreds of thousands of homes and businesses this year to prevent power lines from sparking wildfires during high-risk weather conditions, and state officials have also warned that heat waves could stretch electricity resources across the West.

The problems aren’t new for California or Newsom, who has pushed his administration to offset the potential effects on the public and pointed to climate change and mismanagement of Pacific Gas & Electric Co. as the driving causes of the state’s electricity problems.

Yet as the COVID-19 pandemic wanes, the potential for summer and fall outages mark another test for a governor whose first term in office has been defined by emergencies beyond his control and whose political survival is likely to hinge on how voters view his leadership in times of crisis.

“This current governor has been dealt a hand of disaster cards that no governor has ever been dealt,” said Daniel Zingale, a former advisor to Newsom and former Govs. Arnold Schwarzenegger and Gray Davis. “People know that.”

Zingale said Newsom was energized by big challenges and — after COVID-19, an economic downturn, wildfires and other disasters that have hit California over the last two years — the governor wouldn’t be singularly judged on power outages.

“People don’t like power shut-offs,” Zingale said. “Having said that, most people understand that, when it’s necessary, a power shut-off is preferable to a wildfire. In this case, we know we’re going into a very rough summer of drought and bad conditions.”

Electrical utilities turn off power circuits when weather forecasts predict that strong winds and dry conditions could pose an extreme fire threat. The companies consider fire potential, wind models, the condition of their lines and other factors to assess the need to de-energize their equipment in specific areas.

The use of intentional outages has been a thorny political issue for Newsom since he took office in 2019.

Shut-offs are a key tool to protect Californians and their homes from the threat of utility-caused blazes. But the practice creates other risks to public safety and problems for people who rely on electricity for medical needs. Prolonged outages also aggravate residents as basic services and simple luxuries, such as a cold refrigerator and an air-conditioned home in the sweltering summer heat, are taken away.

Newsom referred to shut-offs in October 2019 as the “new normal” and a necessary alternative to catastrophic wildfires when PG&E began cutting power to more than 1 million Californians nearly a year after the company’s equipment sparked the deadliest blaze in state history.

But as the outages dragged on and public anger swelled over poor notification and planning by the utility, the governor quickly changed his tone and lashed out at PG&E. He called the company’s actions “unacceptable” and pledged to “hold PG&E’s feet to the fire” and ensure the utility was meeting safety requirements and obligations to cut back trees around power lines.

The governor’s administration has pushed the state’s public utilities to reduce the scope, duration and frequency of power shut-offs to prevent wildfires, resulting in shorter shut-offs last year and hopes for fewer such events this year.

The utilities have added more weather stations and cameras to improve surveillance of conditions on the ground, more sectionalizing devices that divide lines to limit outages to fewer customers, and improved access to backup sources of power, said Caroline Thomas Jacobs, director of the Wildfire Safety Division of the California Public Utilities Commission.

“They’re continuing to build upon everything that they did last year to continue that reduction effort” in public safety power shut-offs, Thomas Jacobs said.

Southern California Edison reported a 13% increase in the number of customers who lost power but a 33% reduction in the average duration of shut-offs in 2020 compared with 2019, according to a report the company filed with the state. Edison predicts additional reductions in the duration of outages this year.

Pacific Gas & Electric, which provides service to the northern two-thirds of California, has told state regulators that it’s similarly working to lessen the effects of shut-offs on customers in 2021.

State Sen. Mike McGuire (D-Healdsburg) said PG&E had made progress in deploying diesel generators to substations in some communities most affected by the shut-offs but still had a long way to go with its vegetation management program.

The Public Utilities Commission reprimanded and increased oversight of the troubled utility this year after an audit discovered that PG&E prioritized vegetation clearing around its equipment in low-priority areas, largely leaving trees and shrubs around lines in its high-fire-threat districts untouched in 2020.

“Gavin Newsom has held PG&E accountable more than any other governor that I’ve seen in my lifetime,” McGuire said. “He’s taken it personally. We just have an incompetent dance partner with PG&E.”

Southern California Edison shut off electricity to more than 110,000 customers in its service territory in January when high Santa Ana winds and low humidity levels posed a significant wildfire threat. Nearly 5,000 Edison customers lost power without prior warning during the shut-offs, according to a report filed with the state.

In Thousand Oaks, Bill-de la Peña said the outages disabled one-third of the traffic signals and backup power failed. She said tens of thousands of homes in her city lost power, and local leaders — who bore the brunt of public anger — couldn’t get answers from Edison on when the company would turn the power back on.

“People were understandably frustrated, and I felt helpless as the mayor of Thousand Oaks,” Bill-de la Peña said. “They were frustrated that the city couldn’t do anything. We tried to explain to them that this is completely out of our hands.”

Although weather can be unpredictable, officials expect shut-offs to continue through the fall as drought conditions worsen in the state — potentially overlapping with the recall election, which most political observers predict will take place in late summer or autumn.

The governor declared regional states of emergency affecting 41 counties, accounting for 30% of the state’s population, over the last month due to drought.

“If the fuels are dry, an ignition from a wind event is more likely to be catastrophic,” said Michael Wara, director of the Climate and Energy Policy Program at the Woods Institute for the Environment at Stanford University. “The most dangerous time from a wildfire perspective is late summer into the fall.”

Regulators have also warned of the potential for an electricity shortage.

The California Independent System Operator, which runs the electric grid for most of the state, applied rolling blackouts affecting more than 800,000 California homes and businesses over two days in the middle of a heat wave last August. Temperatures soared 10 to 20 degrees above normal in the West, increasing demand for electricity.

CAISO is required to carry energy reserves under federal law, and when those reserves were insufficient, blackouts were ordered to conserve electricity and prevent larger uncontrolled outages, officials said. Subsequent investigations determined that a series of factors, including the unexpected weather, insufficient reliability planning and market practices, caused the problem.

At the time, Newsom pleaded with Californians to conserve electricity, and his administration worked quickly to reduce the demand on the grid to limit the outages.

The leaders of the state Public Utilities Commission, CAISO and the California Energy Commission detailed their efforts to procure more energy and reduce demand to avoid a repeat of last year’s rolling blackouts at a state Capitol hearing last week. But Elliot Mainzer, president and chief executive officer of the CAISO, said that didn’t mean California was in the clear.

“The most significant risk factor for grid liability remains extreme heat, particularly heat that spreads across the wider Western United States and continues to get hotter every year,” Mainzer said, noting he has “guarded optimism” that the state is in a better position than it was last summer. “We are noticing extreme heat-wave events are becoming more frequent and intense. As a result, the grid will continue to remain vulnerable to high loads and decreased imports during a broader West-wide heat wave event like the one we saw last year.”

Zingale believes Californians understand that climate change and the decisions of investor-owned utilities are responsible for the state’s outages, which their governor has little control over. But history shows people look for someone to blame.

Then-Gov. Davis’ slow response to the 2000-2001 energy crisis in California, which triggered rolling blackouts across the state, helped pave the way to low approval ratings and ultimately to his recall in 2003.

To many voters, Davis appeared incapable of managing and delivering an essential service for millions of residents. Evidence surfaced later of illegal market manipulation by Houston-based Enron Corp. and other energy companies that took advantage of California’s decision — made before Davis took office in 1999 — to deregulate the utility industry.

Although the blackouts that led to Davis’ recall nearly two decades ago are very different from the outages Newsom is dealing with this year, the governor’s political fortunes could be similarly tied to decisions that are all but out of his control.

California regulators told state legislators this week that they would ask consumers to conserve energy this summer to prevent blackouts.

“It’s great if people do what we want them to do,” said Assemblywoman Rebecca Bauer-Kahan (D-Orinda). “But it’s a big ‘if’ and one of the most unreliable aspects of this to me.”

The situation could mean Newsom will have to rely on Californians to limit their electricity usage and, if outages occur, not to point the finger at him

“He’s been governor now for 2½ years,” Gilliard said. “The fact is, the governor is the top guy.”