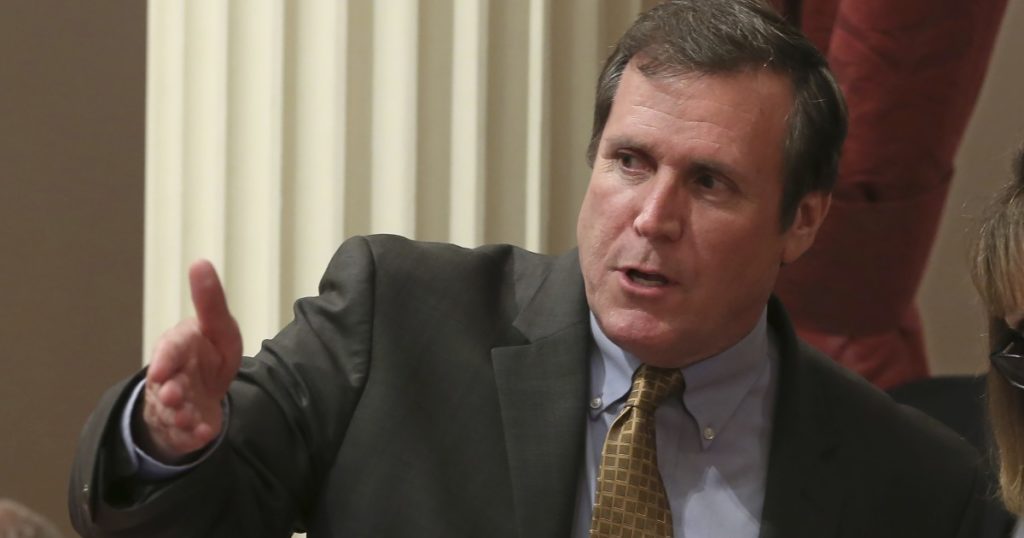 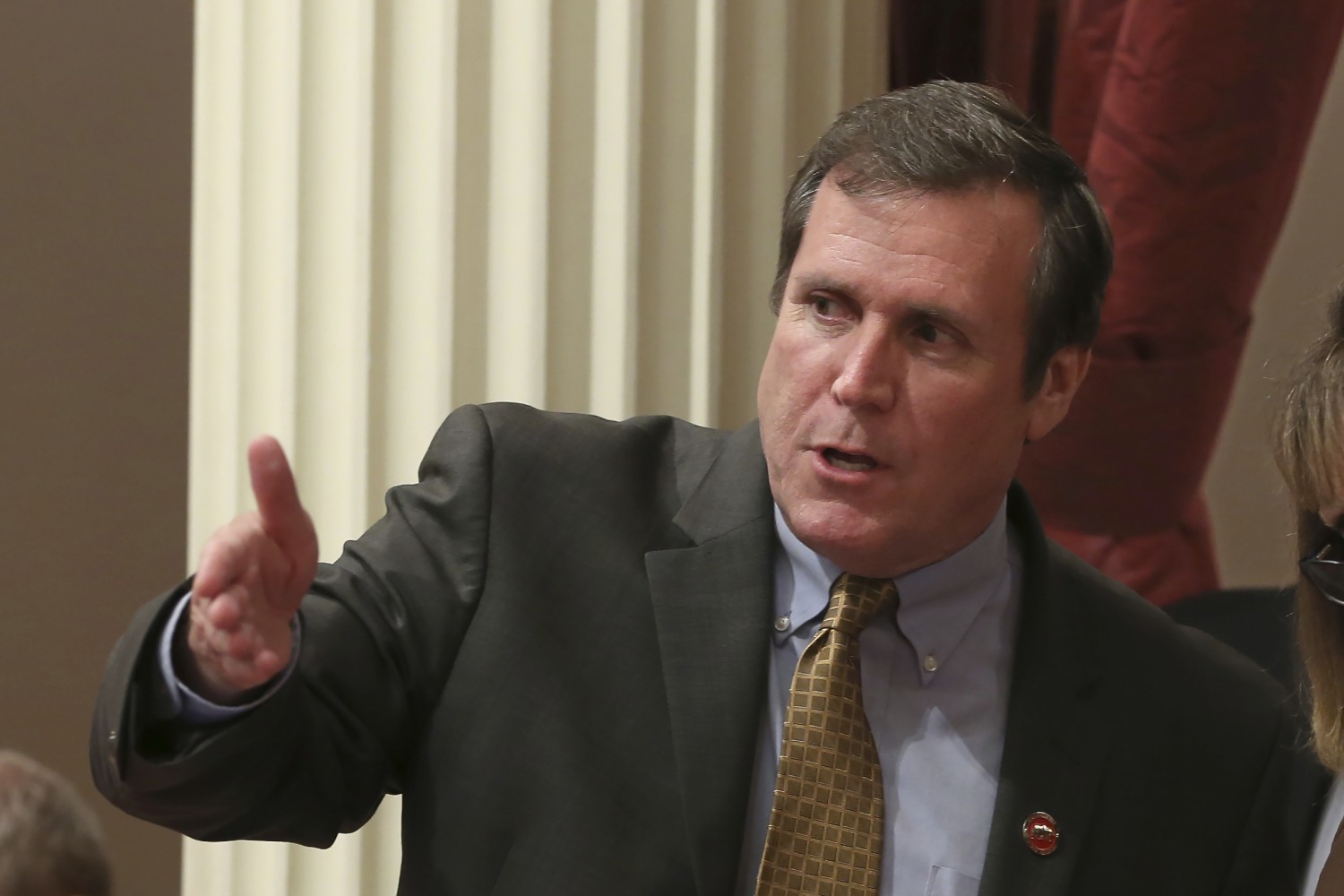 A Republican moderate takes over as state Senate minority leader this week — a small, post-Trump step that could help rejuvenate the California GOP.

Sen. Scott Wilk, 61, of Santa Clarita is a throwback Republican lawmaker, the type needed by the GOP if it’s ever going to move forward and regain legislative relevancy.

He’s a self-described “practical conservative” who strives toward bipartisanship and often coauthors bills with Democrats.

“I don’t poke them in the eye,” he said. “I try to be very civil. That’s very much lacking in today’s world.”

Wilk’s brand of conservatism makes him a moderate by contemporary standards, in which politics are polarized into gridlock. What keeps Sacramento churning is one-party rule. Democrats are so dominant that they can enact anything they unite behind. Unfortunately, without ballast on the right, the majority party often veers too far left.

What remains of the weakened Senate Republican Caucus realized the need for change. And that’s a good sign for the GOP and for two-party democracy.

But there’s a sad history for moderate Republican leaders in the state Capitol. Here’s the pattern: When they’ve moved too far to the center — voted for tax increases, fought climate change or not shown enough partisanship — they’ve been dumped.

By contrast, Wilk’s predecessor was dumped partly because she’s too far on the right fringe.

Sen. Shannon Grove, 55, of Bakersfield probably would have been axed anyway, because she committed an unpardonable sin: Two Republican seats were lost in the November election, on her watch. When that happens, the leader is usually ousted.

Meanwhile, Republicans scored elsewhere in California. They picked up one Assembly seat and four in the U.S. House.

Republicans are down to nine state Senate seats. Democrats hold a supermajority of 30. In addition, there’s one vacancy that’s sure to be filled by a Democrat — the seat held by Holly Mitchell before she was elected to the Los Angeles County Board of Supervisors.

The last time Senate Republicans were close to this weak was in 1961, when there were only 10 of them. Long before that, in 1883, there were eight.

Assembly Republicans aren’t much better off. There are only 19 of them, against 59 Democrats. There’s a vacancy and one independent — former GOP leader Chad Mayes of Yucca Valley, who was considered too moderate and dumped. Then he dumped the party.

The current Assembly GOP leader is Marie Waldron of Escondido, who keeps a low profile.

By contrast, Grove’s profile was too high and too cringey for most Senate Republicans. She once described herself as a “gun-carrying, tongue-talking, spirit-filled believer.”

She was a vigorous follower of former President Trump, calling him “the greatest of all time.” Grove bought Trump’s lie that Democrats stole the election with voter fraud.

After being declared the winner by everyone except the booted president and his faithful, Joe Biden tweeted that Americans should “put away the harsh rhetoric.” Grove retweeted with a retort: “Oh, I don’t think so.”

The clincher for Senate Republicans came Jan. 6, when a deadly, Trump-crazed mob stormed the U.S. Capitol. Grove posted a tweet falsely claiming that the rioters were led by the leftist movement known as antifa, not by Trump supporters. She quickly deleted it, but not before it popped eyes throughout the California political world.

“This is an example of a Trumpian legislator who peddled conspiracy theories about the election paying the price and losing a leadership post,” veteran Republican consultant Rob Stutzman said. “Members of the caucus were hearing from the business community that if they expected business to fund Republican election efforts, they needed to make a change.”

In truth, major business donors have practically given up on the GOP in California and have been focusing on electing moderate Democrats to the Legislature.

“Wilk is a good example of the type of big-tent Republican that the California GOP needs to win,” said Marty Wilson, executive vice president of the state Chamber of Commerce and a longtime political player. “He’s a guy who knows how to win by talking about something other than Donald Trump.”

Wilk, the former owner of a public affairs firm who began his career as a legislative staffer, represents a purple district that covers the Santa Clarita, Antelope and Victor valleys. It’s a competitive district that slightly favors Democrats in voter registration, by about eight percentage points. Statewide, Democrats hold a whopping advantage over Republicans of nearly 22 points.

Biden beat Trump in the district by six percentage points, making it tough for down-ticket Republicans. Wilk won reelection by a mere 1.6 points. He’ll be termed out in 2024.

If asked, Wilk will tell you he voted for Trump because the alternative was Biden. What else can a Republican leader say? Six million Californians voted for Trump, even if 11.1 million supported Biden.

Wilk doesn’t think the election was stolen. He sounds like he wishes toxic Trump would get lost and leave the party alone.

Trump was “too much,” Wilk said. “He sucked all the oxygen out of the room.

“With Trump no longer there, hopefully people will start turning their attention to what’s going on in Sacramento,” he added. “Education, roads, water — all determined in Sacramento.”

Wilk turned down a request to co-chair the recall campaign against Gov. Gavin Newsom. If it qualifies for the ballot, “I’ll be supportive,” he said. But because the Democrat will face reelection next year anyway, that’s the proper time to oust him, the GOP leader contends.

Wilk is a turn in the right direction for the GOP — leadership rerouting toward the center.