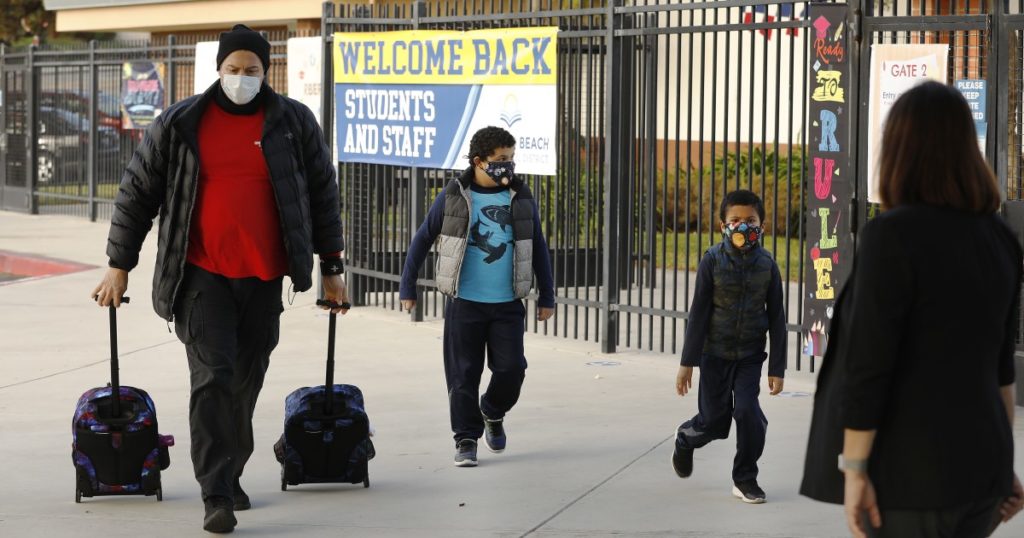 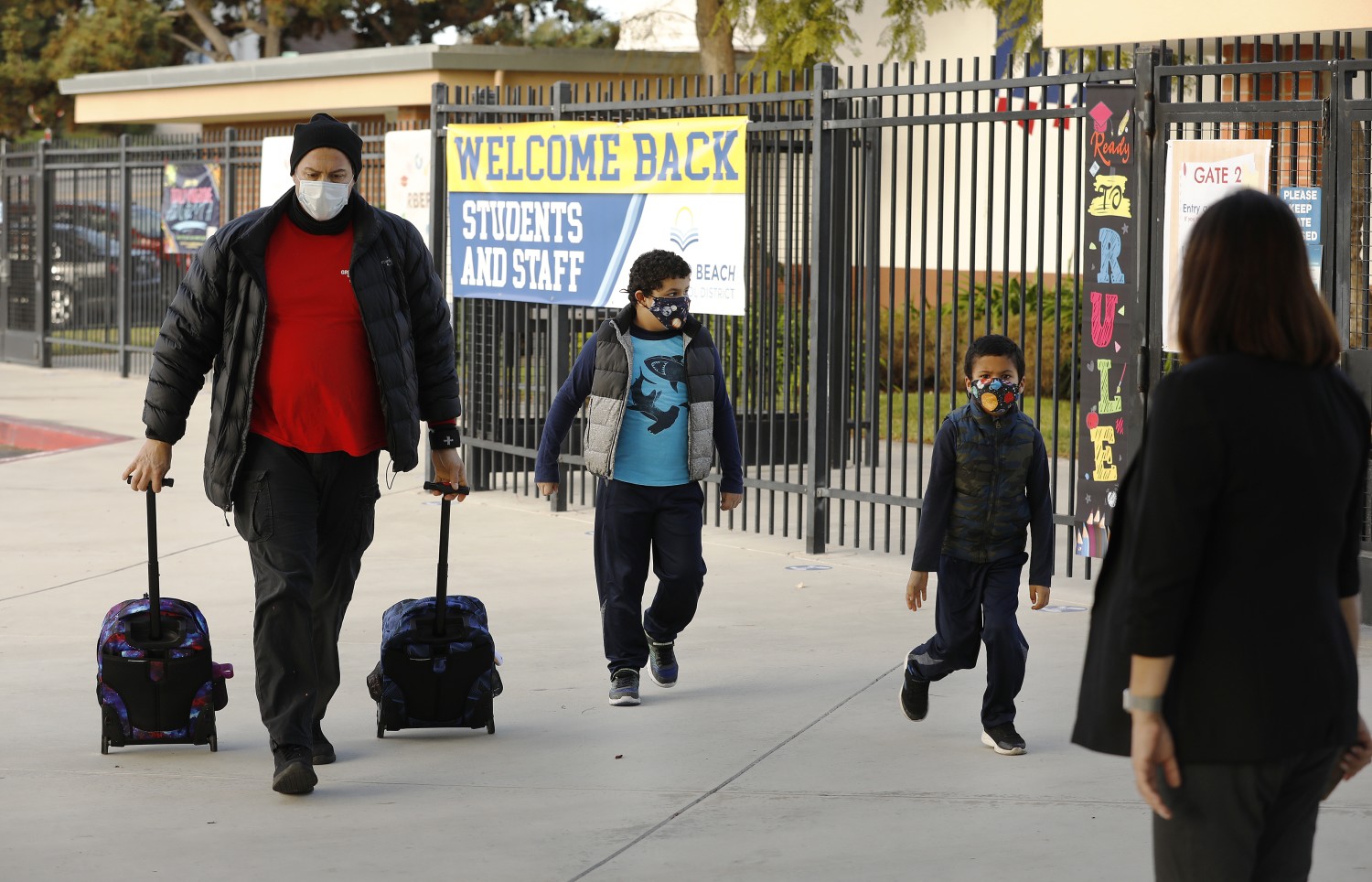 California lawmakers gave final approval Thursday to a $6.6-billion plan to urge more school districts across the state to reopen classrooms for their youngest students, though a bipartisan chorus of voices expressed frustration and fear the effort won’t fully meet the unique needs of their communities.

The legislation, which Gov. Gavin Newsom plans to sign on Friday, is the most far-reaching effort by legislators in more than six months to address the educational challenges brought on by the COVID-19 pandemic. It earmarks $2 billion in education funds for elementary schools that offer in-person learning next month, focusing first on students in transitional kindergarten through second grade and ramping up to include older students based on the number of infections in counties. Schools that open later than April 1 would receive smaller cash grants and those that don’t open by May 15 would lose their entire share of the incentive funding.

“The goal of this is to spur districts on the sidelines to act and also help that those that are already acting,” said Assemblyman Kevin McCarty (D-Sacramento).

Almost $4.6 billion in the proposal would be allocated to school districts over the next 18 months for programs designed to mitigate the learning opportunities lost to students since the beginning of the public health crisis. The funds could be used to pay for summer school activities and in-person services such as tutoring.

California’s public and private schools have adopted a patchwork of approaches to teaching students since the academic year began in August. Though state officials provided a few basic guidelines for campus safety precautions and procedures to use in the event educators or students tested positive for the virus, they did not require schools to move from remote to in-person instruction as conditions improved in some communities in the fall. Nor were those schools that opened their classrooms required to close as COVID-19 cases increased during the winter.

Newsom and lawmakers have been sharply criticized for not providing a more comprehensive statewide plan until now and spent most of the past two months seeking a compromise to assuage parents who are eager for on-campus instruction as well as educators who have been leery of returning to classrooms before they are vaccinated.

The compromise plan, Assembly Bill 86, won votes Thursday from both Republicans and Democrats in the Legislature. But the lengthy debates in the state Assembly and Senate seemed to reflect the vast differences felt in communities hardest hit by the virus and those where closed schools have come to symbolize frustration with public health restrictions.

“Enough with these kids languishing at home,” state Sen. Andreas Borgeas (R-Fresno) said. “It’s not fair and it is destructive to the long-term health of our state.”

Two Senate Republicans attempted late changes to the bill to force schools to offer as many as five days a week of in-person instruction, an effort quashed by the house’s majority Democrats. State Sen. John Laird (D-Santa Cruz), one of the lawmakers who negotiated the details of the bill, said such a mandate would have the effect of keeping more students in remote learning if schools couldn’t gradually reopen classrooms by offering partial days and weeks.

“What we had to do is craft a bill that matched all those different conditions that matched the differences that exist throughout our state of 40 million,” Laird said.

Meanwhile, one prominent Assembly Democrat lashed out at the announcement made by the Newsom administration on Wednesday night to loosen the conditions under which counties can soon move out of the purple, most restrictive tier of COVID-19 rules — a change that could result in less-stringent virus testing requirements for schools and more in-person classes.

“There were negotiations made based on tier systems that are being changed now,” Assemblywoman Lorena Gonzalez (D-San Diego) said. “It’s kind of not fair.”

AB 86 will require schools in districts in the state’s second-most-restrictive red tier to offer in-person instruction to all elementary grades and one grade of either middle or high school. Testing will be more frequent — and include students and staff who do not have COVID-19 symptoms — for schools in purple-tier counties that fail to craft safety plans by March 31.

The Newsom administration said Wednesday night it will dedicate 40% of available COVID-19 vaccines to residents in the most disadvantaged areas of the state. Once the new program reaches 2 million vaccinations, which will require about 400,000 additional doses to be administered, counties can more quickly move into the red tier. Administration officials said that would accelerate the reopening of local businesses and schools.

Dr. Mark Ghaly, the state’s secretary of Health and Human Services, acknowledged Thursday that the change alters the reopening plans for some districts. Gonzalez, a San Diego Democrat whose career began in organized labor, said the change would force more local educators into going back to the workplace sooner than they expected.

“So, if you get calls from your teachers union a little upset, they have the right to be upset,” she said. “You don’t negotiate a deal and then change the parameters of that deal on the day that we’re voting on it. And I think that’s just, we have to be honest about that. It’s a little dishonest what’s happening.”

Hours after the legislative vote, California Federation of Teachers President Jeff Freitas echoed that criticism, saying that Newsom’s new vaccination plan “pushes more districts into returning to in-person instruction at levels that have been considered dangerous for a year.” He warned that some school districts will have to “start from scratch” on reopening plans if the tier system is adjusted, and risk “further eroding Californians’ trust, especially among communities of color who have expressed higher levels of skepticism about the safety in returning to schools.”

Several Republicans criticized Newsom for his reluctance last year to impose a more uniform statewide standard for opening K-12 campuses and for his administration‘s decision not to take the advice of some national officials to allow additional school classrooms to open more quickly.

“It is because of the [state’s color-coded] blueprint framework and the audacity of this man to then blame us, to then blame the Legislature and say we’re dragging our feet when he’s the one who has kept them closed this whole time,” Assemblyman James Gallagher (R-Yuba City) said. “And if he used that arbitrary power, he could open schools tomorrow.”

Democrats who represent counties where infection rates have remained high rejected assertions that Newsom or state officials should have required elementary, middle and high schools to open during bleak periods of time in the fall and winter.

“The fact of the matter is, is that if you represent a community that’s poor and one that’s of color, families are not feeling comfortable sending their children back to school,” Assemblyman Eduardo Garcia (D-Coachella) said. “In December and in January, we had no vaccines to send people back to schools in a safe environment. So let’s be real.”

Garcia and a number of lawmakers who spoke during the debate and are parents to young children described the humbling experience of trying to help teach their kids using concepts in math and science that have changed in recent years. In voices full of frustration and exhaustion, they called the vote on AB 86 the most important one they’ve taken all year.

“I got to see my children light back up, I get to see them start sleeping again,” Assemblywoman Rebecca Bauer-Kahan (D-Orinda) said in describing the changes once her young children began hybrid learning. “I got to see the joy that it brought them to be back with their friends. And every California child deserves that.”