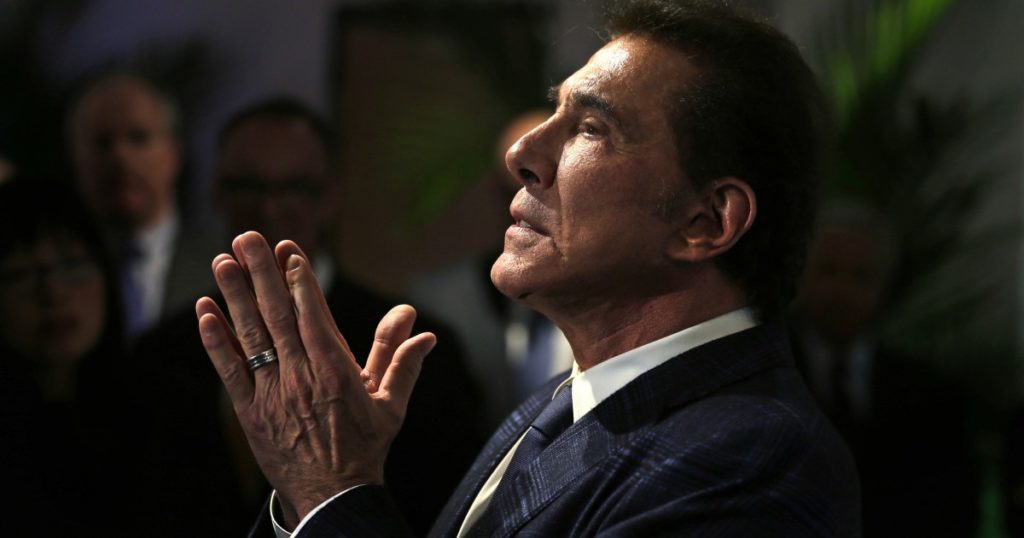 When billionaire casino mogul and top GOP donor Steve Wynn was accused of a decades-long pattern of sexual misconduct in the midst of the #MeToo movement, elected officials across the country quickly distanced themselves from him.

The news broke in January 2018, and some Republicans immediately called on their colleagues to return donations from Wynn, who was accused of pressuring employees to perform sex acts.

Sen. Lindsey Graham also chimed in: “We should do of ourselves what we ask of the Democratic Party. So I don’t think we should have a double standard for ourselves.”

Within months, Wynn started to donate again, and by 2020, he was once again a major GOP donor, giving millions of dollars to conservative super PACs, President Trump’s reelection campaign, candidates and state Republican parties across the nation.

This year, Winn gave more than three-quarters of a million dollars to a joint fundraising committee aimed at helping Republicans retake control of the U.S. House of Representatives, and that group gave donations to dozens of incumbents across the country, including nearly every member of California’s Republican delegation to Congress.

The recipients includeReps. Mike Garcia of Santa Clarita and David Valadao of Hanford, whose seats will be hotly contested in next year’s midterm elections because they are key to GOP hopes to retake control of the House.

Elections experts said Wynn’s reemergence in the political area and the candidates’ willingness to take his money were unsurprising, and unlikely to move voters.

“In politics in general, I think the hope of people who have been accused of wrongdoing is that we’re all amnesiacs. And eight times out of 10 we are,” said Jessica Levinson, an election law professor at Loyola Law School. “Republicans in tight races — very few people are going to vote against them because they got money from a PAC that got money from Steve Wynn.

“At this point, because we’re not in that cycle of breaking news about Steve Wynn, I think it’s probably a pretty reasonable calculation, one, because time has faded and two, because it’s not a direct contribution.”

Wynn donated $771,900 — the maximum allowed — to the Take Back the House 2022 joint fundraising committee on March 26, according to the Federal Election Commission. From that day through the end of the month, the committee, which is controlled by House Minority Leader Kevin McCarthy of Bakersfield, sent $5,800 max-out donations to more than 40 members of Congress, with FEC documentation citing Wynn as the source of the money.

The California Republicans who received these donations are Reps. Devin Nunes of Tulare, Darrell Issa of Bonsall, Doug LaMalfa of Richvale, Tom McClintock of Elk Grove, Michelle Steel of Seal Beach, Valadao, Garcia and McCarthy. Rep. Young Kim of La Habra also received a donation from Take Back the House 2022 on March 31, but her FEC filing does not identify the donor.

McCarthy was the only one to respond to requests for comment.

Asked about the new donations, McCarthy said in a statement, “Steve Wynn is one of the great innovators in the history of modern capitalism. I thank him for his continued support, and I look forward to working with him to retake the House Majority.”

In 2018, McCarthy reportedly gave a Wynn contribution to charity in the aftermath of the sexual misconduct allegations.

Three years ago, a Wall Street Journal investigation found that Wynn had engaged in sexual misconduct for decades. Among the cases cited was one by a casino hotel manicurist who claimed Wynn forced her to have sex with him and who received a $7.5-million settlement, the Journal reported.

Wynn, now 79, responded to the investigation by denying that he had ever assaulted any woman and by blaming his ex-wife for airing the allegations as she sought to revise their divorce settlement.

Though Wynn was never charged criminally, the fallout was severe. He resigned as the head of his namesake company. Gambling regulators in Nevada and Massachusetts fined Wynn Resorts tens of millions of dollars for its executives covering up or ignoring Wynn’s alleged behavior. Wynn agreed to pay Wynn Resorts $20 million to partly settle shareholder lawsuits against the company.

Wynn, who previously had supported Democrats including President Obama, stepped down as finance chair of the Republican National Committee. His name was stripped off a commons at the University of Pennsylvania, his alma mater where he once served as a trustee.

Among the politicians who returned or donated Wynn contributions were Sens. Jeff Flake of Arizona, Rob Portman of Ohio, Dean Heller of Nevada, Tim Scott of South Carolina, and then-House Speaker Paul Ryan of Wisconsin.

McCarthy is in line to take the speaker’s gavel if Republicans win control of the House next year. His Take Back the House 2022 is a joint fundraising committee of 59 members of Congress and 20 other political committees that raised nearly $22 million in the first quarter of this year, according to the Federal Election Commission. Wynn was one of 11 people who maxed out to the committee.

Wynn’s attorney did not respond to a request for comment, but he told the Associated Press that Wynn “has the same rights and entitlements as any other private citizen in the United States of America.”

Four of the Californians who received donations from the PAC — Garcia, Valadao, Steel and Kim — are among the 22 incumbent Republicans targeted by Democrats in the 2022 election. The four seats are in traditional Republican strongholds but their demographics are changing. Mirroring a national trend, these suburban districts have grown increasingly competitive as their residents have grown more diverse. Democrats won the four seats during the blue wave in 2018; Republicans flipped them back last year.

An added uncertainty is redistricting because California lost a congressional seat based on the latest census report. Garcia’s northern Los Angeles County seat, which he won by 333 votes in November, may shift closer to Los Angeles when the redistricting commission redraws the maps, a move that would make it more Democratic.