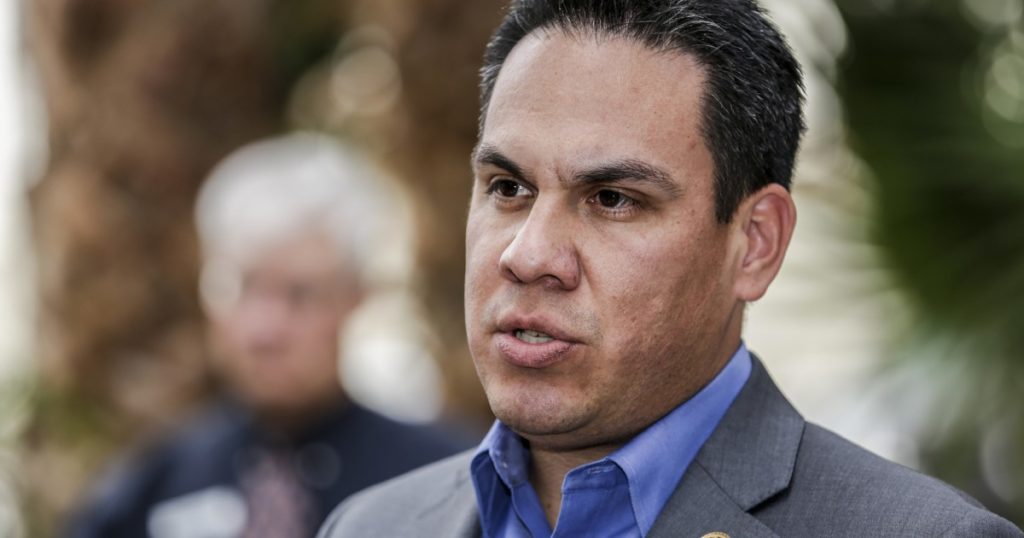 Redlands Rep. Pete Aguilar was elected vice chair of the House Democratic Caucus on Thursday, guaranteeing at least one Latino member of House leadership in 2021 and 2022.

Aguilar faced Rep. Robin Kelly of Illinois for the No. 6 slot in leadership, winning 148 to 82. Once called the “potted plant” position, the role has developed increased prominence in the past few terms and is often a launching point for higher leadership positions. Aguilar replaces Rep. Katherine Clark (D-Mass.) who was elected assistant speaker Wednesday.

“I don’t want to just take up space, I want to be useful to the caucus,” he said.

Aguilar lost a bid for the position in 2018, and said before Thursday’s election that he used that failure to prepare him for this bid.

He began speaking with colleagues months ago to get a better sense of their needs and concerns before asking for their support. Aguilar recruited an 18-person “whip team” of supporters to lobby colleagues on his behalf, speaking with every Democrat in the House and many of the candidates who ran in 2020 and would get to vote if they won their own elections.

“People need to be heard, and giving them the space to be heard is an important component of what someone at the leadership table should bring,” Aguilar said.

Colleagues said it made a difference. Rep. Scott Peters (D-San Diego) said Aguilar got involved in House races across the country, and developed an “encyclopedic” knowledge of other congressional districts that helped him understand representatives’ goals and needs.

“Running for leadership you really have to spend a lot of time with members, getting to know not only their internal aspirations, but their external challenges,” Gomez said.

Aguilar was first elected to Congress in 2014 after serving on the Redlands City Council and as mayor. A moderate, Aguilar drew attention in 2018 when he convinced several Republicans to buck their party and help Democrats force votes on immigration legislation, including creating a path to citizenship for people brought to the country illegally as children.

Rep. Ben Ray Lujan (D-N.M.), who as assistant speaker is currently the only Latino in leadership, is leaving the House after being elected earlier this month to the Senate. With immigration reform among the topics President-elect Joe Biden hopes to address, Latino House members said they wanted to ensure they were represented in leadership.

“Obviously having that voice at the table is important,” Aguilar said.