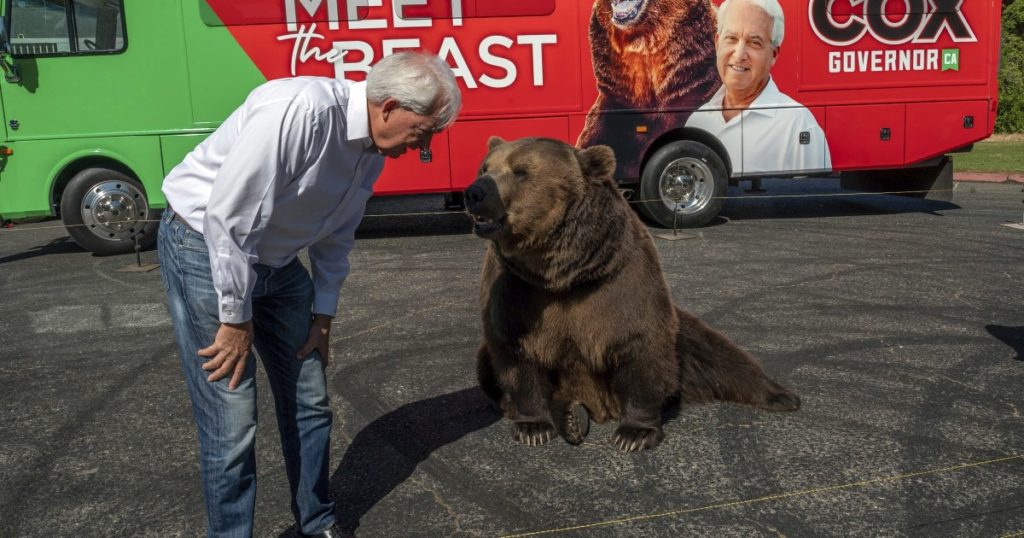 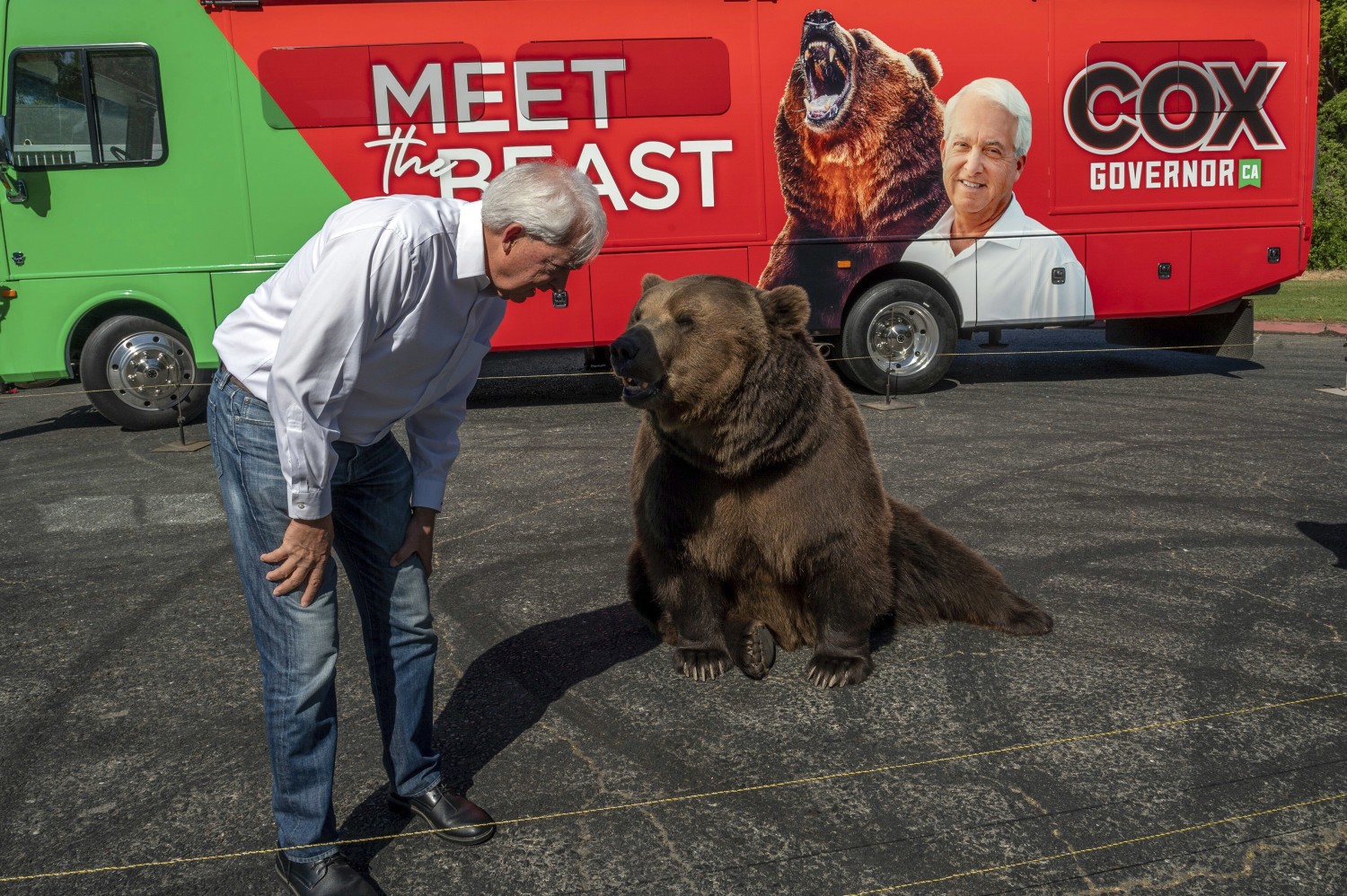 The campaign to oust Gov. Gavin Newsom from office in a recall election saw a pair of competing spectacles Tuesday, as one Republican opponent posed for photos with a burly Kodiak bear and another sought to leverage her celebrity status on national television.

The events woke up what has so far been a quiet march toward a historic recall election. Last week, elections officials reported that backers of the effort had collected enough voter signatures to trigger a special election, giving voters the chance to remove the governor and select someone to fill the remaining year on his current term.

GOP hopeful John Cox, whom Newsom handily beat in the 2018 governor’s race, kicked off his “Meet the Beast” campaign tour in Sacramento on Tuesday with a trained, 1,000-pound Kodiak bear named Tag. The bear, Cox said, was emblematic of California’s need for a leader who is more aggressive on pressing issues than “pretty boy” Newsom, as he called the governor.

For his part, Newsom conspicuously avoided responding to either challenger during an event at which the union representing California firefighters promised to join the fight to keep him in his job in an election later this year.

He returned to a familiar theme in his remarks after receiving the endorsement of the California Professional Firefighters — namely, that the backers of the recall election launched their effort because of his stance on issues such as immigration and taxes, and not his handling of the COVID-19 pandemic.

“Read the petition. It doesn’t even reference the pandemic,” Newsom said. “It’s about the values of this state. And that’s what’s really on the ballot.”

Even so, the governor acknowledged that not all of the roughly 1.6 million voters who signed the recall petition were far-right activists. Supporters of the recall have said that Democrats, too, joined their effort.

“I understand why people would sign something and the stress and fear, the anxiety we all faced in the last year,” Newsom said. “So, my job is to earn that trust back.”

The political chest-thumping comes just over a week after Secretary of State Shirley Weber announced that recall proponents had gathered enough signatures to force a special election by year’s end and offers the first indication yet of the possible theatrics ahead.

It’s too soon to tell whether this recall attempt will rival the spectacle Californians saw in 2003, when Democratic Gov. Gray Davis was ousted from office. That year, more than 130 candidates hoping to replace Davis crammed the ballot, including Hustler magazine founder Larry Flynt, “Diff’rent Strokes” star Gary Coleman and Hollywood action star Arnold Schwarzenegger, who was ultimately elected governor.

But if the events on Tuesday are any indication, this recall campaign could be headed that way.

With the massive Kodiak bear wandering around behind him, munching on chicken and cookies thrown by a trainer, Cox criticized Newsom as an elitist, accused him of being coddled by members of the wealthy Getty family and claimed he was beholden to Sacramento’s special interests.

“Gavin Newsom, our pretty boy, has so angered and divided the people of this state that over 2 million literally put their name on the line to recall him,” Cox told reporters, then looked at the bear.

“That’s why our friend is here today,” he said. “We’re gonna need big, beastly changes to be made in this state. We’re going to have to be tough as a beast to go against the special interest groups that have really run California for so long.”

Cox, a Rancho Santa Fe businessman who made his fortune in Midwest real estate investments, said he’s donated $10 million of his own money to his campaign.

He carried his campaign theme to a new level in his new, multimillion-dollar “Beauty or the Beast” ad campaign that he launched this week, in which he casts himself as the “nicest, smartest beast in California” and Newsom as the “beauty” — and it stars his favorite Kodiak, Tag.

The ad is reminiscent of the infamous Republican Carly Fiorina’s “demon sheep” ad produced for her campaign against then Sen. Barbara Boxer in 2010. The video featured a field of grazing sheep, which were supposed to represent fiscal conservatives, and a man in a sheep suit with blazing red eyes who was supposed to represent her GOP rival, Tom Campbell.

Political ad man Fred Davis, who was behind the demon sheep ad, now works for Cox.

Tag, the 9-year-old bear who was born at a private zoo in Ohio, lives on a 60-acre ranch near Frazier Park and is not a stranger to the bright lights and cameras. He starred in the Paramount Network television series “Yellowstone” starring Kevin Costner, a Rocket Mortgage Super Bowl ad and the Apple TV series “See” with actor Jason Momoa, according to his trainer Keith Bauer.

Tag can eat up to 60 pounds a day, loves Walmart rotisserie chickens and “has the personality of a golden retriever,” Bauer said before Cox’s news conference Tuesday.

The People for the Ethical Treatment of Animals on Tuesday criticized the Cox campaign for using the bear, saying it was exploitative and dangerous. Cox, however, said his campaign made sure the bear was well-cared for before hiring the animal.

The campaign videos by Cox and Jenner blamed Newsom‘s policies for hurting California during his nearly two-and-a-half years in office, with homelessness and housing prices on the rise and towns leveled by wildfires.

Both seized on Newsom’s misstep in November when he dined at the upscale French Laundry restaurant in Napa Valley to celebrate the birthday of friend and lobbyist Jason Kinney at a time when he urged Californians to avoid gatherings outside of immediate family.

“We’ve got businesses closed, we’ve got kids who are still staring at a screen including my own 16-year-old. We’re looking at another year of fires, shortages of energy, electricity and water. Homelessness is worse, taxes are skyrocketing, along with the cost of living,” Cox said. “And then our beautiful governor decides to go to the French Laundry restaurant and have dinner with lobbyists.”

Newsom has repeatedly said that attending the dinner was a mistake.

The governor has also urged Californians to look at his overall record. California now has the lowest COVID-19 transmission rate in the nation and has provided more vaccinations to residents than any other state. Newsom expects to totally open up the state’s economy by mid-June and to have children back in school by the start of the next academic year.

It’s unclear which candidates Newsom will face when the recall election is held later this year. Candidates cannot formally file to run until the results of the petition signature gathering effort are certified by the secretary of state.

Voters who signed the recall petitions now have the option of asking elections officials to remove their names through early June, a process some Democrats are trying to promote. Newsom stopped short Tuesday of endorsing that effort, though he said he wouldn’t discourage voters from taking a second look at their support.

“But we’re operating as if this is on the ballot,” the governor said. “And I anticipate it will be on the ballot.”