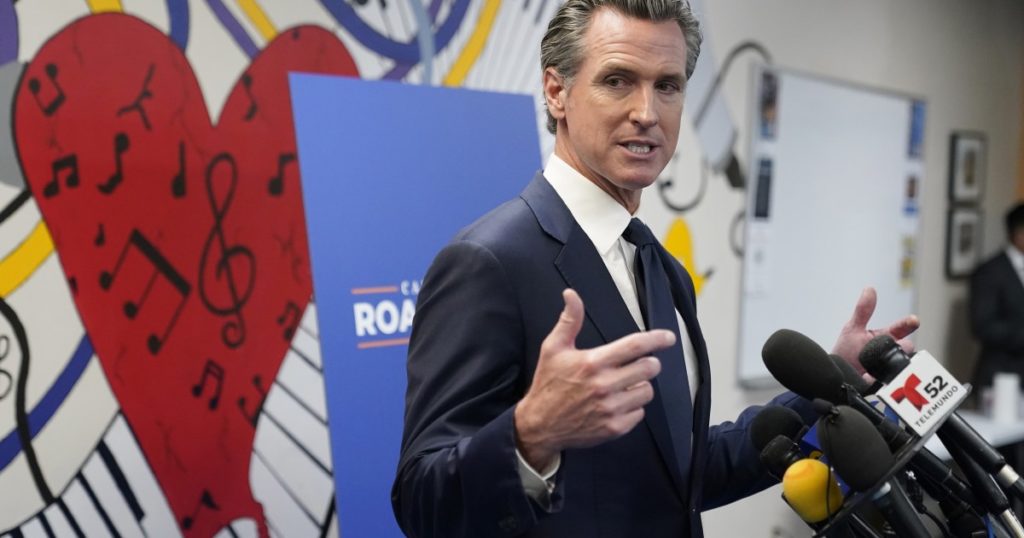 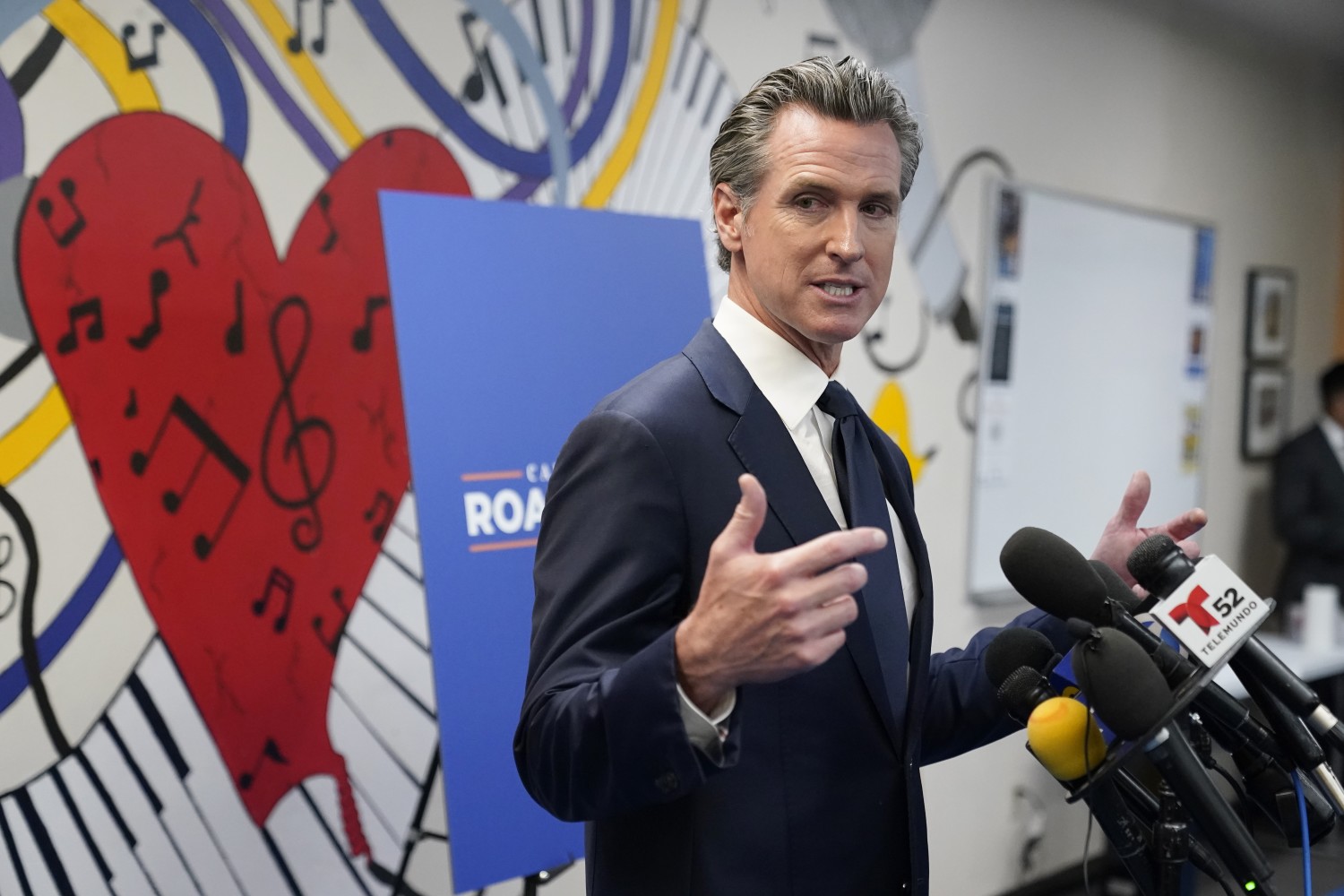 The recall campaign against California Gov. Gavin Newsom came into clear focus Saturday, but with little of the frenzy and national spotlight that nearly two decades ago caused the political earthquake that ushered Arnold Schwarzenegger into office.

The tentative candidate lineup revealed by state election officials appeared to do little to change the dynamics of the race, where a group of mostly Republicans face an uphill battle to unseat Newsom in a solidly Democratic state, at least for now.

“Except for the ‘Godfather’ movies, the sequel is never as good as the original,” said Dan Schnur, who teaches political communication at USC and UC Berkeley. “We’ve done this before. In 2003, this was an unprecedented political event.”

State elections officials announced late Saturday that 41 candidates had filed valid paperwork and met other requisites to appear on the recall ballot to replace Newsom, kicking off the final phase of campaigning before the Sept. 14 election. Secretary of State Shirley Weber will release a certified list of names that will appear on the ballot on Wednesday.

It’s a far cry from the 2003 recall election of then-Gov. Gray Davis, a media spectacle where 135 candidates appeared on the ballot in a campaign that drew global attention.

The current recall has not captured the public imagination the way the prior one did. Political experts say that’s because this effort appears less likely to succeed and lacks the novelty of California’s first gubernatorial recall. While there are two reality stars running, there’s no candidate with the stature of Schwarzenegger. The most famous candidate in the race, Olympian Caitlyn Jenner, decamped to Australia to film a reality television show shortly before the filing deadline.

Recall backers argue that the race is closer than it appears in public polling, and point with pride to the GOP field of 21 candidates, which includes 2018 gubernatorial nominee John Cox, former San Diego Mayor Kevin Faulconer, former Rep. Doug Ose, Assemblyman Kevin Kiley and Jenner. Conservative radio host Larry Elder, who said he filed papers to run, did not appear on the state list.

The candidates will bring different constituencies to the polls that will be united in their support of recalling Newsom, said Anne Hyde Dunsmore, campaign manager for Rescue California, one of the main recall proponents.

“I like the fact that people have choices, and I think that’s what they’ve needed all along. Republicans come in shapes, colors and sizes, and by the way, so do Democrats,” she said. “They don’t overlap at all. Caitlyn Jenner is not taking anyone away from John Cox.”

Based on numbers alone, Newsom has little to fear at the moment. In addition to polls showing voters oppose the recall, Democrats have a 22-point advantage over Republicans in voter registration, and the anti-recall campaign has raised over $28 million, more than all of the GOP candidates combined.

Prior recall efforts failed to gather enough signatures to qualify for the ballot, but this effort qualified after recall proponents received four extra months to gather signatures because of the pandemic, and they were able to tap voter frustration over school and economic closures because of COVID-19. Newsom also made mistakes, such as attending a lobbyist’s birthday dinner unmasked with a group of people at an exclusive Napa Valley restaurant as he told Californians to avoid such gatherings.

Recall backers are counting on the enthusiasm gap to buoy their efforts in the election. Polling shows that Republicans are more energetic and motivated to vote on the recall than Democrats, and they believe disaffected Democrats and no-party preference voters will also turn out in favor of the recall.

Democrats are cognizant of the need to make sure Newsom’s supporters actually cast the mail ballots that are sent to their homes or turn out to the polls and vote.

“Let me make something absolutely clear: If Dems don’t vote, CA WILL end up with a Trumpian Governor,” tweeted Steve Smith, the spokesman for the California Labor Foundation. “Forget about advancing ANY progressive policy. I’m seeing a lot of apathy from Dems who think the recall is going to fail. That needs to end. Like, NOW. Take nothing for granted.”

The anti-recall committee, the state party and labor unions plan to use their money and members to spend the next eight weeks reaching out to voters.

Nathan Click, a spokesman for the anti-recall effort, said they already have 1,000 volunteers using a texting platform to reach more 2 million Democratic voters every week.

“Our campaign is wholly focused on motivating those Democrats, telling them what’s at stake, who is behind the recall, the Republican forces behind it,” Click said, adding that the people behind the recall want to eliminate gun control and environmental laws and are anti-immigrant. “That’s what is at stake, and that’s what we’re going to spend a lot of time explaining and talking about with voters over these next two months.”

Republicans are debating whether to allow the state GOP to endorse a candidate, a proposal that is causing friction between party leaders, who say the party needs to weigh in on the race, and grass-roots activists, who believe the process is being rigged to favor Faulconer, a favorite of the party establishment including House Minority Leader Kevin McCarthy.

On Friday, the party’s rules committee will consider a bylaw proposal that would require a recall candidate seeking an endorsement to gather 200 delegate signatures to be considered. The party’s executive committee will consider it the following day, and if the effort is successful, delegates will meet virtually on Aug. 7 to vote on an endorsement.

“We’re a political party, and it’s too important of a race of a special election to sit it out and not at least give the option to our delegates to endorse,” said party spokesperson Ellie Hockenbury.

Ose said that while he would be able to meet the delegate threshold, the proposal is insulting to the party’s base because the signature requirement could lock out some lesser-known candidates

“We should never forget we’re Republicans running for office in California. When we tell the grass roots they don’t matter, that’s a fundamentally flawed approach,” he said. “But that is what is going on here.”

Newsom’s campaign erred in failing to file paperwork that would have allowed his Democratic party designation to appear on the ballot. But they won a major victory in persuading prominent Democrats to stay out of the race.

However, eight Democrats did file papers to qualify for the ballot. The most well-known is personal finance influencer Kevin Paffrath — or “Meet Kevin,” as he’s known on YouTube, where he has more than 1.6 million followers.

The Ventura-based real estate broker said he had no qualms about challenging a fellow Democrat.

“I don’t believe that makes me anti-Democrat,” Paffrath said, adding that he believed all Californians, regardless of political party, should be voting for the recall because “there is no way Gov. Newsom is the answer.”

“I’m coming in without any kind of political baggage, he said. “I’m not beholden to any political agent or anything.”

The lack of a major Democratic candidate on the ballot is a precarious strategy for Democrats — if the recall is successful, the next governor will almost certainly be a Republican.

“The odds are overwhelmingly in Newsom’s favor in this election. But not allowing another Democrat on the ballot is an extraordinary risk,” Schnur said. “All it takes is an unexpected twist in a low-turnout election and Democrats are left with no fallback plan at all.”

Newsom has been able to use the benefits of incumbency to prop up his campaign. A windfall of tax revenue has allowed Newsom and legislative Democrats to send $600 stimulus checks to millions of Californians, which his rivals have dubbed a “recall rebate.”

At times, the imagery has been surreal: at Universal Studios Hollywood, the governor was joined by Optimus Prime and the Minions as he chose $1.5-million grand-prize winners in a lottery for Californians who had been vaccinated. At another vaccine lottery event, he selected winners to receive $50,000 while standing in a game show-like setting complete with lotto ball dispenser, a prize wheel and a confetti drop.

But much could happen in the next eight weeks, particularly with the pandemic. The infectiousness of the new Delta variant and rising hospitalization rates have prompted Los Angeles County and others to reverse course and require everyone to wear face masks indoors while in public, including people who are vaccinated.

There is also confusion over whether school children will need to wear masks at school next year, and the prospect of a brutal wildfire season and potential power outages.

“Newsom’s under this huge microscope, with a lot of plates being spun on the end of sticks right now that could fall off before this election,” said Rob Stutzman, a veteran GOP strategist who worked on Schwarzenegger’s successful campaign during the 2003 recall. “He’s got all the power in the world, but he also has all the liabilities in the world too.”