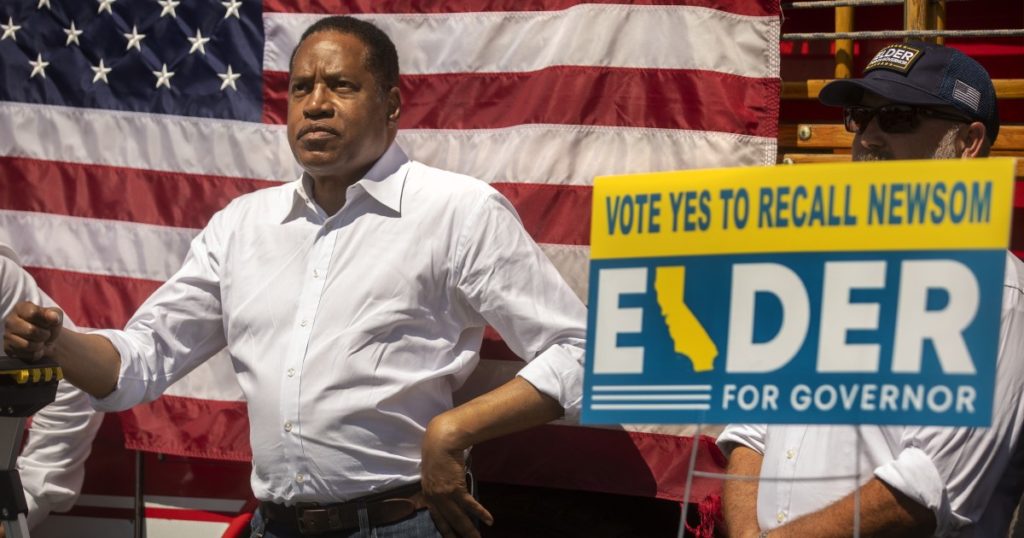 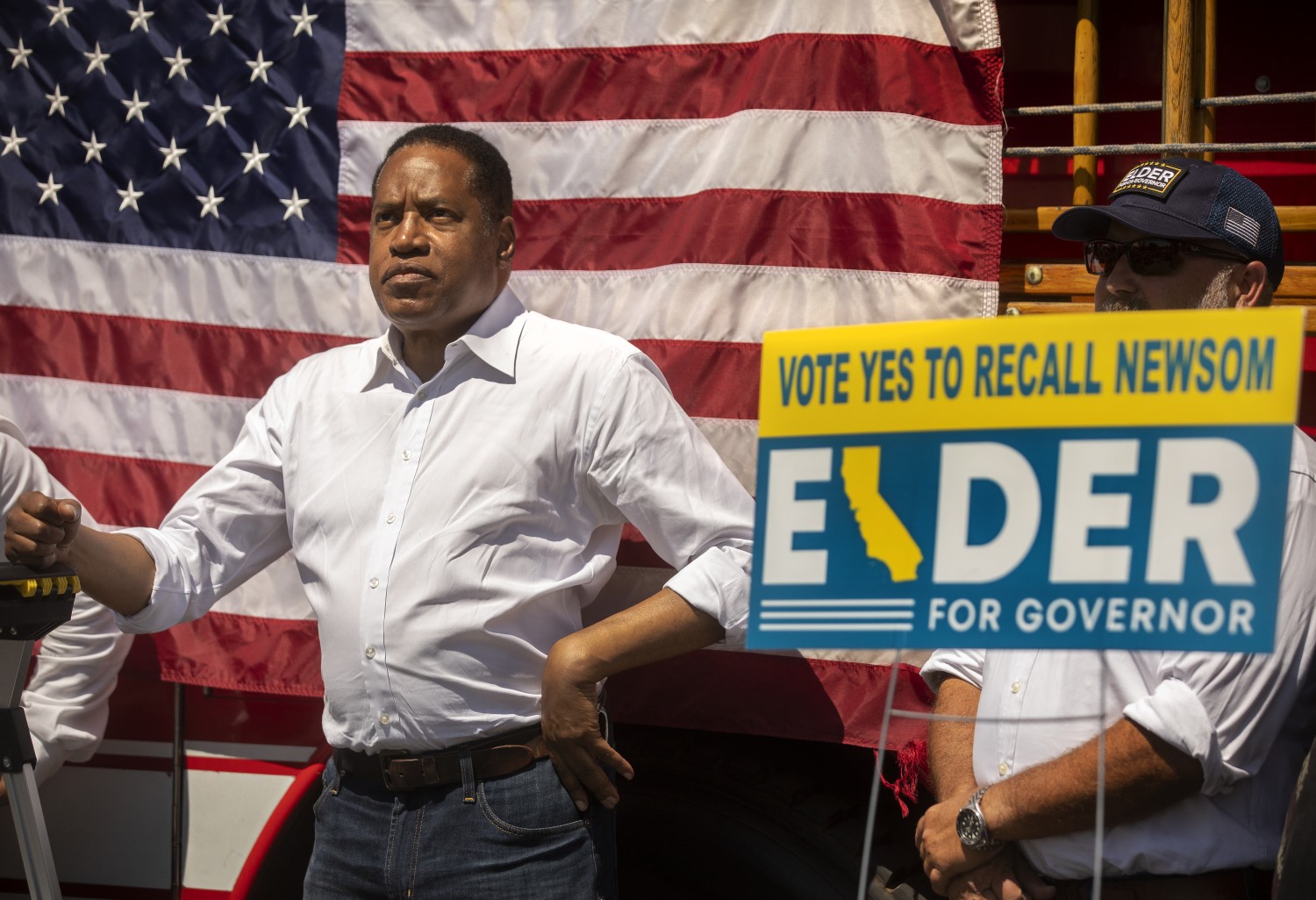 As the recall charges into its final days, Democrats’ midsummer panic has given way to cautious confidence that Gov. Gavin Newsom’s outlook has brightened, aided by healthy turnout so far, a towering advantage in money and the emergence of an ideal foil: Larry Elder.

A spate of polls showing a tightening race in July worked to Democrats’ advantage, as they marshaled their considerable institutional might in this deep-blue state to nudge their voters to the ballot box. But with seven days of voting to go, Newsom’s allies are working to ensure that promising signs for the governor do not lead to last-minute voter complacency.

“Even though the polling looks better, we’re still very clear that you can’t take anything for granted,” said Steve Smith, spokesman for the California Labor Federation, among Newsom’s allies opposing the recall. “This last … push is where the campaign is won or lost. Absolutely we can’t take our foot off the pedal.”

Recall proponents, meanwhile, are projecting an air of underdog scrappiness, noting their effort, underestimated from the start, managed to give Newsom some serious heartburn. The fact that Newsom continues to seek help from national Democrats, they said, is a sign that the governor’s worries have not abated.

“Take the Bernie Sanders’ ad, and the Kamala Harris and supposed Biden appearances, you’ve got to wonder if they have some serious cracks in their very basic numbers because they are shoring that up at risk of alienating people in the center,” said Anne Hyde Dunsmore, campaign manager for Rescue California, one of the main recall groups.

Supporters of the recall face daunting political math: Democrats outnumber Republicans by 5 million registered voters, and independents tend to lean liberal in California. To pull off a win, recall backers must hope a significant number of Democrats defect from Newsom and vote in favor of the recall. But no polling demonstrated that; rather the surveys showed that a majority of Democrats do not support the recall but they were less motivated to vote than Republicans.

Mail ballot returns so far appear to indicate that the $36 million Newsom’s allies spent in August — on ads, social media and other get out the vote efforts — helped overcome any enthusiasm gap. That’s more than three times as much as the pro-recall forces and the GOP candidates combined.

Democrats account for more than half of the 6.4 million ballots turned in as of Tuesday, while Republicans account for just under a quarter, according to Political Data Inc., a firm that uses state, county and commercial data to analyze the electorate.

Paul Mitchell, vice president of PDI, said the higher the turnout, the greater Newsom’s chances are given the state’s voter registration. He predicted that Democrats needed a 1.3-million ballot cushion going into election day; they currently have 1.84 million more ballots returned than Republicans. In-person voting, which favors the GOP, also began in parts of the state on Saturday but the numbers are too small so far to draw any conclusions.

“The idea of this being an election with a Republican surprise attack with a highly motivated base and Democrats not taking it seriously and not voting — that scenario is gone. That ship has sailed,” Mitchell said. “Now it’s more of a straight-up Democrat vs. Republican in a state with a 2-1 Democratic advantage and turnout at the level of a gubernatorial election, and Larry Elder is the face of the recall now versus Gavin Newsom. I don’t think it’s going to be a big question on election night.”

Newsom’s opponents qualified the recall for the Sept. 14 ballot because of a confluence of factors — Californians’ frustration over school and business closures, inconsistent COVID-19 guidelines, a judge’s ruling to grant recall backers four extra months to gather signatures because of the pandemic and Newson’s decision to attend a posh maskless birthday dinner at the same time he was urging Californians to skip multifamily Thanksgiving dinners.

From the start, Newsom decided to avoid making the race a referendum on his tenure. As Elder became the Republican front-runner, Democrats homed in on controversial statements Elder has made about women, minorities, climate change and his opposition to vaccine mandates, arguing that such a stance would cause more deaths and needlessly extend the pandemic.

In recent polls, voters give strong marks to Newsom’s handling of COVID-19, exceeding his overall approval rating — an irony given that the pandemic fueled the recall effort in the first place.

“The very thing they tried to take him out on may very well end up being his salvation,” noted Paul Maslin, a Democratic strategist.

Newsom’s allies have booked millions of dollars of television ads between now and Sept. 14, and rolled out a new one Tuesday with Newsom making a direct appeal to voters.

“Republicans want to take us backwards with this Sept. 14 recall. They’ll eliminate vaccine mandates for health and school workers on Day One, threatening school closures and our recovery,” he says. “So I’m asking you to vote ‘no’ on the recall.”

Elder’s pronouncements past and present are causing some Republicans to say he is harming their effort to recall Newsom.

In recent days, the conservative radio host has said there should not be sex education in schools and that he would replace Sen. Dianne Feinstein with a Republican if given the opportunity. Comments also resurfaced of Elder previously saying slave owners should have been given reparations for the loss of their property, and that a woman who accused him of sexual harassment was too ugly for the allegation to be true.

“The concept of Larry Elder being a candidate for governor looks good on paper. When it comes down to executing a campaign with him being the focal point, it certainly has been challenging,” said Randy Economy, one of the early recall proponents who said he remains hopeful that it will pass. “There are still millions of people out there in the process of voting and making up their minds.”

Former state GOP Chairman Ron Nehring, who is backing another candidate in the race, was more blunt, arguing that Elder’s remarks, particularly about reparations, are damaging.

“That is the kind of thing a radio talk show host says to provoke an argument and draw people to his show. That’s not the kind of thing a serious candidate attempting to win office in a heavily Democratic state says,” Nehring said. “It’s political malpractice of the highest order and it is hurting the recall effort and it is helping feed Gavin Newsom’s strategy, which is to make the recall about anybody but him.”

Democrats were gleeful about Elder’s remarks.

The Elder campaign did not respond to a request for comment.

Republicans contend that the focus ought to be on Newsom and his efforts on issues such as COVID, homelessness, crime and wildfire prevention during his tenure.

“People need to look back about how one man has ruled this state for the past three years — especially during the past 18 months during the pandemic,” Economy said. “You need to ask yourself at the end of the day, was Gavin Newsom the right person to lead us through this?”

Los Angeles Mayor Eric Garcetti said that while he is “no political strategist,” the pro-Newsom effort had been “very defensive.”

“My message is very optimistic and positive,” said Garcetti, who expects Newsom to prevail. “This is an amazing governor. This is someone who is smart, who is courageous, who is willing to learn from yesterday and to make today better.”

Still, because of the uniqueness of the recall election, nothing is certain.

“Everybody is flying blind on both sides,” said Gale Kaufman, a veteran Democratic strategist and advisor to labor groups. She noted that the pandemic, wildfires and a tumultuous stretch for Democrats nationally all combine to make a volatile political dynamic. “How you calculate for it is just more complicated, and honestly there’s as much guesswork as skill. And we don’t like guesswork.”