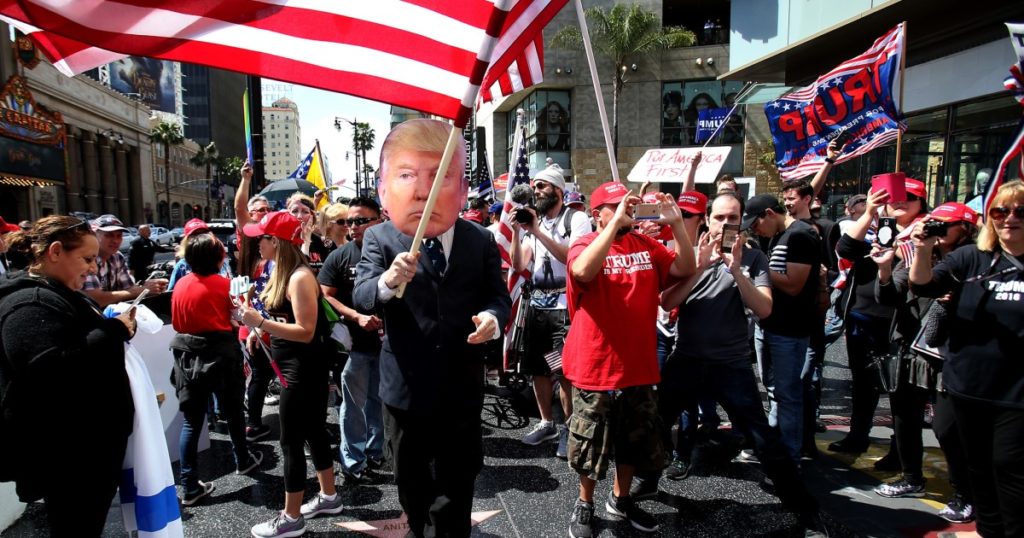 Despite its reputation as a leader of resistance, California saw more pro-Trump crowds than any other state during the president’s term in office.

That’s according to the Crowd Counting Consortium, a project from the University of Connecticut and Harvard University that documents political gatherings of all kinds. By combing news reports and social media, the group has cataloged some 4,500 pro-Trump gatherings nationwide since he took office in 2017. Of those, 417 events were in California. Florida was a distant second, with 253 events.

California is one of bluest states, but it’s also the most populous — 17.5 million people voted in the 2020 election. Though Joe Biden won the election here by a 2-1 margin, Trump claimed around 6 million votes, a higher raw total than in any other state.

After adjusting for size, California doesn’t look so exceptional in terms of Trump gatherings: It ranks 20th out of the 50 states and Washington, D.C., in protests per Trump voter. Washington was at the top, with 108 pro-Trump events in the past four years, despite having fewer than 19,000 people voting for the president.

The protests in California haven’t been limited to the red parts of the state. The top three counties are in Southern California: Los Angeles, San Diego and Orange counties combined had 174 events, about 40% of the pro-Trump protests in the state. Of the top 10 counties, the only one that went to Trump in the election was Kern, home of Bakersfield and a center of the oil and gas industry.

The researchers study the crowds and classify the political causes that motivate people to show up for each gathering. Many events provided only general support for the president, protesting officials who spoke against him or rallying in support of his campaign promises. Some protests were more specific, such as events opposing public health regulations related to the pandemic, supporting policing efforts or opposing the Black Lives Matter movement.

The data show a spike in pro-Trump protests after the 2020 election. After Biden was named the winner, there were a wave of protests supporting Trump’s disproved claims that the election had been stolen. On Jan. 6, the day the U.S. Capitol was raided, there were 15 protests of the election results in California, more than in any other state.

The number of gatherings in support of the president have been dwarfed by those opposing him. Over the last four years, there were nearly 38,000 anti-Trump events tracked by the consortium, eight times more than the number of pro-Trump gatherings. Again, California led the nation, hosting more anti-Trump rallies than any other state.