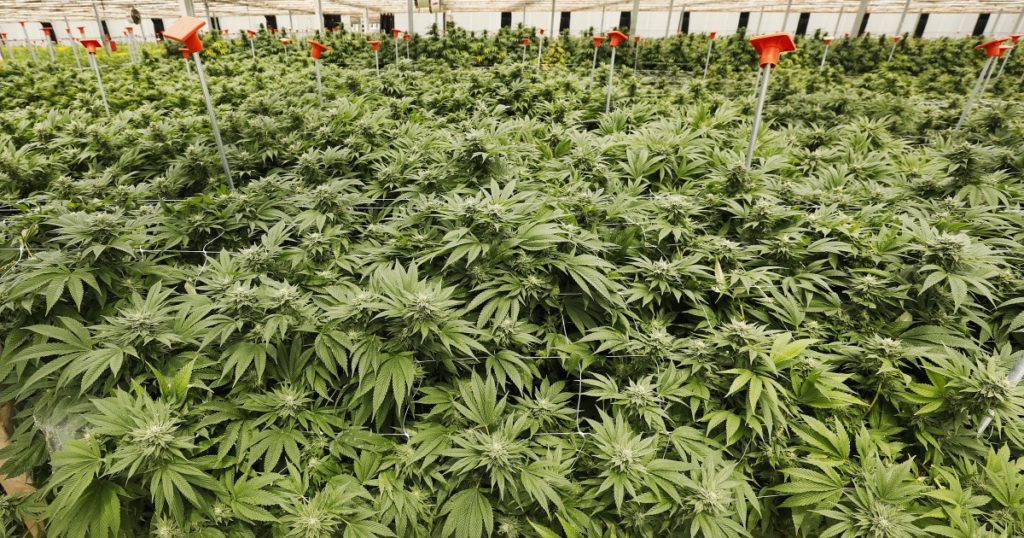 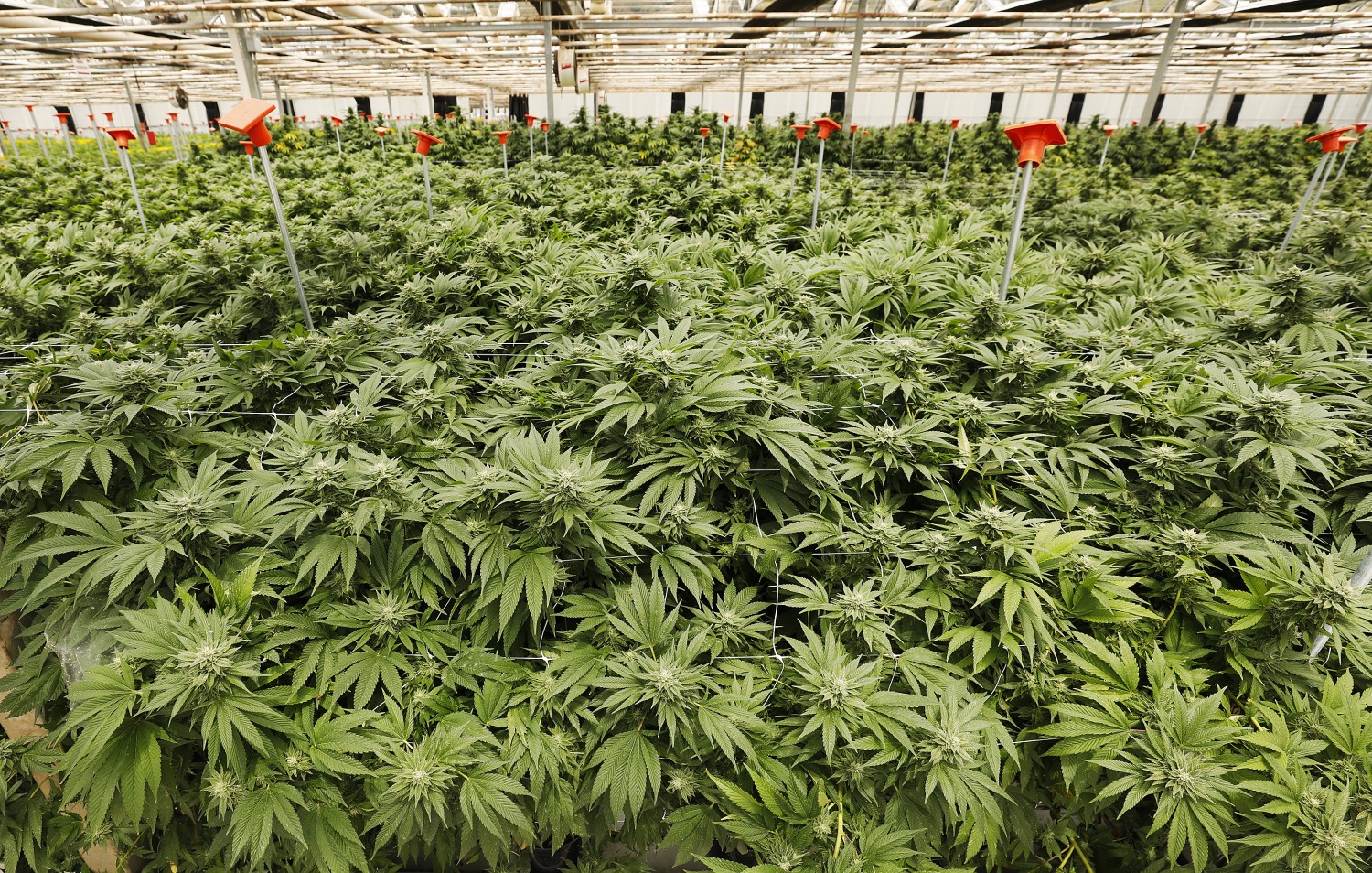 The California Legislature on Monday approved a $100-million plan to bolster California’s legal marijuana industry, which continues to struggle to compete with the large illicit pot market nearly five years after voters approved sales for recreational use.

Los Angeles will be the biggest beneficiary of the money, which was proposed by Gov. Gavin Newsom to be provided as grants to cities and counties to help cannabis businesses transition from provisional to regular licenses.

“California voters approved Proposition 64 five years ago and entrusted the Legislature with creating a legal, well-regulated cannabis market,” said Assemblyman Phil Ting (D-San Francisco), the chairman of the Assembly Budget Committee. “We have yet to reach that goal.”

Many cannabis growers, retailers and manufacturers have struggled to make the transition from a provisional, temporary license to a permanent one renewed on an annual basis — a process that requires a costly, complicated and time-consuming review of the negative environmental effects involved in a business and a plan for reducing those harms.

As a result, about 82% of the state’s cannabis licensees still held provisional licenses as of April, according to the governor’s office.

The funds, including $22 million earmarked for L.A., would help cities hire experts and staff to assist businesses in completing the environmental studies and transitioning the licenses to “help legitimate businesses succeed,” Ting said.

The grant program is endorsed by Los Angeles Mayor Eric Garcetti, who said in a letter to legislators that the money is “essential in supporting a well-regulated, equitable, and sustainable cannabis market.”

Separately, the governor wants to give cannabis businesses a six-month extension beyond a Jan. 1 deadline to transition from provisional licenses by complying with mandates of the California Environmental Quality Act, or CEQA. That extension, which faces opposition for delaying promised environmental safeguards, was not included in the state budget bill approved Monday and is still being negotiated with lawmakers.

The governor’s proposal to extend provisional licenses has drawn objections from a coalition of seven environmental groups including Sierra Club California, Defenders of Wildlife and the Nature Conservancy.

They said in a letter to Newsom that the proposal allowing the extension of provisional licenses and interim alternatives to CEQA rules goes against what voters were promised and is “wholly inadequate to protect local communities and the environment.”

At the same time, industry officials say the governor’s proposals do not go far enough in helping businesses struggling to stay open with provisional licenses while meeting what they see as burdensome rules under the state’s environmental regulations.

“It is a significant amount of money, but I don’t know that it actually answers the problem of provisional licenses making it through CEQA analysis in a timely manner to get an annual license,” said Jerred Kiloh, president of the United Cannabis Business Assn.

He said delays in cities adopting rules, their limited staffing and lack of resources by cannabis firms mean some face two to four years to get through the licensing process. Many would face the prospect of shutting down, at least temporarily, if they don’t get a regular license by current state deadlines, Kiloh said.

California voters paved the way for state licensing of cannabis stores, farms, distributors and testing when they approved Proposition 64 in 2016. State officials initially expected to license as many as 6,000 cannabis shops in the first few years, but permits have so far only been issued for 1,086 retail and delivery firms.

In 2019, industry officials estimated there were nearly three times as many unlicensed businesses as ones with state permits. Although some industry leaders believe enforcement has reduced the number of illegal pot shops, a study in September by USC researchers estimated unlicensed retailers still outnumbered those that were licensed.

Supporters of legalization blame the discrepancy on problems that they say include high taxes on licensed businesses, burdensome regulations and the decision of about three-quarters of cities in California not to allow cannabis retailers in their jurisdictions.

The bill approved by the Legislature on Monday includes $100 million and identifies 17 cities and counties earmarked to receive grants, including Los Angeles, which would get the largest grant. Other cities that will get grants include Long Beach, San Francisco, Oakland, Commerce, Adelanto and Desert Hot Springs.

A key requirement to convert from a provisional license is to conduct a CEQA review to indicate how pot farms and other cannabis businesses will affect the surrounding water, air, plants and wildlife, and to propose ways to mitigate any harms.

However, Kiloh said some cities are just setting up ordinances and staffing to process licenses, meaning many businesses cannot meet the looming deadline.

Each cannabis grower must provide evidence that they met the requirements for environmental review. If their city and county do not provide the required document, the applicants must prepare one, which often means hiring environmental consultants.

A bill by state Sen. Anna Caballero (D-Salinas) would have allowed the state to extend provisional licenses six years until 2028, but she shelved it after it drew opposition from the coalition of environmental groups.

The groups sent a letter to lawmakers saying that the bill “does not provide adequate environmental protection.”

The governor’s proposal, which is being considered by lawmakers, would allow the extension of existing provisional licenses by six months.

Environmentalists still hope the budget trailer bill can be changed to address their concerns, according to Pamela Flick, California program director of Defenders of Wildlife.

The group “opposes the proposed trailer bill language because it needs stronger environmental protections consistent with the original commitments made in Proposition 64, in which the voters intended meaningful and timely compliance” with environmental laws, Flick said.

The Newsom administration is warning of dire consequences if pot businesses are not given more time to get a regular license.

“Absent this extension, it is possible that a significant number of these licensees could fall out of the legal cannabis system, significantly curtailing the state’s efforts to facilitate the transition to a legal and well-regulated market,” the administration warned in its budget proposal.

The $100 million would go to local agencies with the most provisional licenses for growing, manufacturing, distribution, testing and retail operations. Some of the money can be used by cities offering equity funding to cannabis businesses owned by people of color.

Lawmakers welcomed the budget proposal from Newsom, who has an interest in seeing the legal market succeed because he was a leading proponent of Proposition 64.

“Governor Newsom is dedicated to the success of the legal cannabis industry in California,” said Nicole Elliott, the governor’s senior advisor on cannabis. “The purpose of this one-time $100 million in grant funding is to aid locals and provisional licensees, many of which are small businesses, legacy operators and equity applicants, in more expeditiously migrating to annual licensure.”

Mayor Garcetti said in his letter that it will help Los Angeles “in creating a robust CEQA compliance program and comprehensive assistance programs to aid licensees in meeting annual licensure requirements.”

However, industry officials note the money will go to a small fraction of California cities, and only those that have already decided to allow cannabis businesses.

“It’s not incentivizing localities who have cannabis bans to get their ordinances up and running,” said Kiloh, owner of the Higher Path cannabis store in Sherman Oaks.

“The real problem is CEQA analysis is a very arduous process,” he added. “I think it would be good to have more reform of the licensing system instead of just putting money to it.”