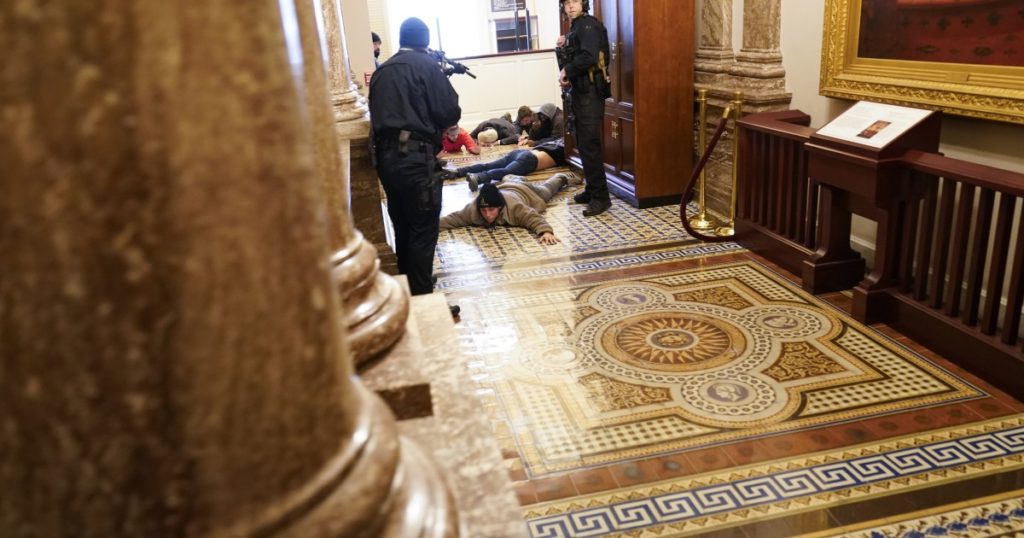 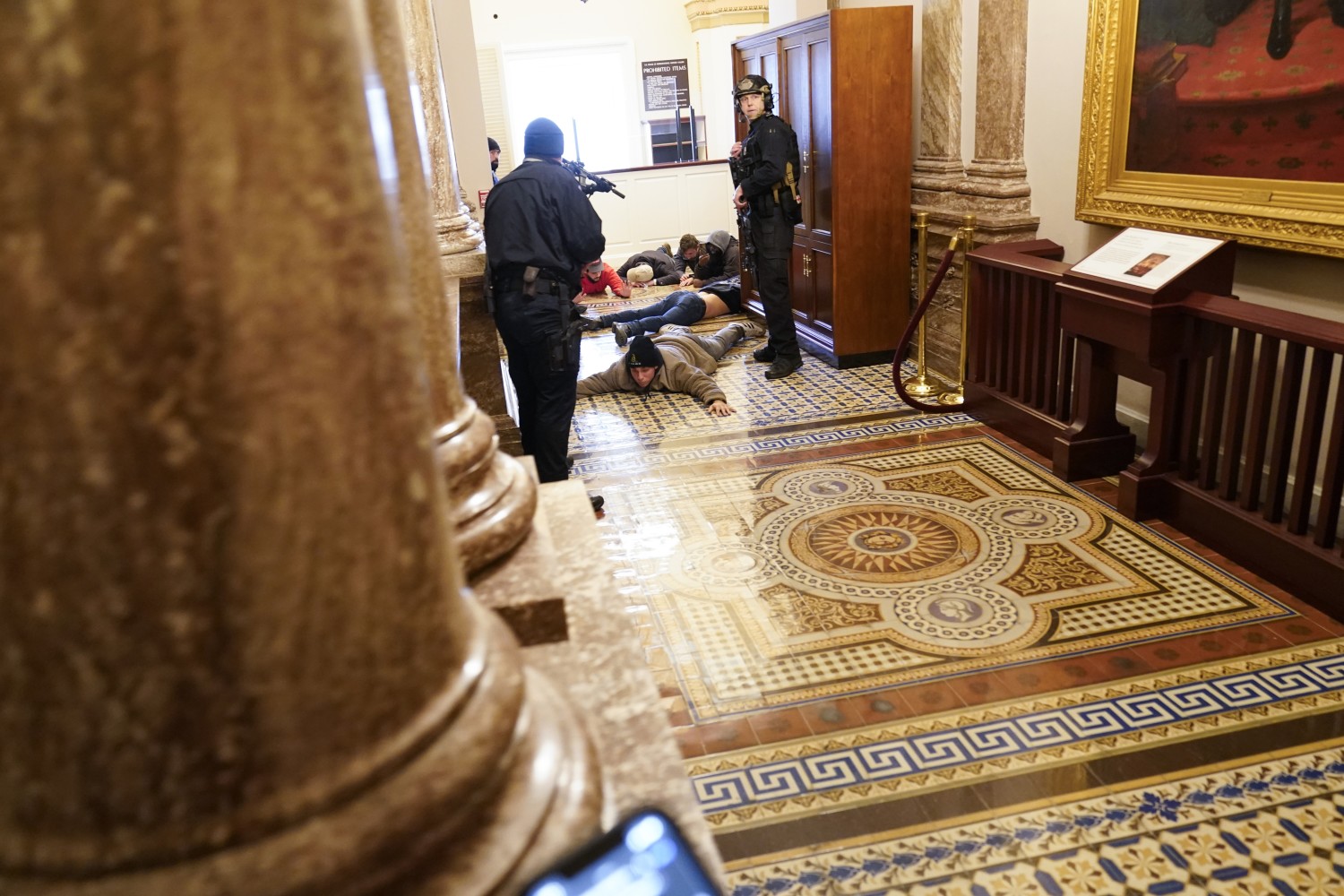 California’s congressional leaders widely condemned the attack on the U.S. Capitol on Wednesday, even as some continued to shelter inside the building, waiting for law enforcement to control violent demonstrators.

House Speaker Nancy Pelosi (D-San Francisco) reaffirmed her commitment to continue the electoral college count that would certify Joe Biden as president-elect, despite an hours-long delay as parts of the Capitol were evacuated when supporters of President Trump mobbed the building.

In a letter to colleagues Wednesday afternoon, Pelosi condemned the day’s events, saying “a shameful assault was made on our democracy.”

“We also knew that we would be a part of history in a positive way, today, despite ill-founded objections to the Electoral College vote,” Pelosi wrote. “We now will be part of history, as such a shameful picture of our country was put out to the world, instigated at the highest level.”

One woman was shot and killed. At least one person who broke into the Capitol invaded Pelosi’s office, where he sat and rested his foot on an office desk.

Shortly after their statement, Trump told his supporters to go home, adding, “We love you,” and repeating baseless claims about election fraud.

House Minority Leader Kevin McCarthy (R-Bakersfield) called for unity, saying on Fox News that “it was the saddest moment” he’d ever experienced in Congress.

He echoed Pelosi’s comment that the House was determined to finish its vote Wednesday, “to show the country we can do our work, we can follow democracy, we can follow the Constitution.”

Just hours after speaking on the House floor about its duty to uphold the Constitution, Rep. Adam B. Schiff (D-Burbank) tweeted Wednesday afternoon that he and his staff were safe, thanks to Capitol police.

“A violent mob won’t stop us from upholding our constitutional duty to certify the election,” he tweeted. “This is a moment when everyone must decide whether our democracy is worth protecting. I believe it is.”

In an interview from another congressional member’s office in another building, Lowenthal said he has been “in such an agitated state” all day.

“I was like, oh, my God, this is like a coup taking place in the United States. The hallmark, the home of democracy, the Capitol of the United States, was attacked, basically, by people who were engaging in, if not insurrection, as close to that as could be,” he said. “It was frightening, it was very frightening.”

Lowenthal said he arrived at the Capitol early to prepare for Congress’ vote to certify the results of the electoral college. He said he watched Trump tell a crowd of supporters Wednesday morning that he would “never concede.”

“I was shocked by the president’s speech,” Lowenthal said. “I thought he incited the group to riot, almost, because he kept saying that he was cheated out of this election.”

Lowenthal had been alone in his office, watching the demonstrations unfold on television. Though he did not support the purpose of the gatherings, he said he supported their right to protest.

Then he saw footage of Capitol police not subduing people smashing windows and storming the Capitol building. Soon after people marched by his office window, Lowenthal left his office for a safer place.

Despite the drama of the day, he said he was determined to complete the task he set out to do Wednesday.

“We’re going to uphold our constitutional duty,” Lowenthal said. “No matter how long it takes tonight, we’re going to vote to certify this election.”

Rep. Norma Torres (D-Pomona) described the experience inside the House chamber, where several lawmakers were holed up, huddling on the floor in gas masks, as horrible.

“It was a pretty terrifying experience,” said Rep. Jimmy Gomez (D-Los Angeles), who was also in the chamber. “This shouldn’t happen in the United States, where people think a democracy is being stolen from them and being antagonized by the president of the United States. It creates a dangerous situation where people are running for their safety.”

Rep. Karen Bass (D-Los Angeles) lambasted the president for “inciting a coup.” She retweeted a series of photos of the Capitol intruders, with the same repeated comment: “Arrest this man.”

Every single person that scaled the Capitol with rope should be arrested.

Every single person that broke into Speaker Pelosi’s office should be arrested.

Every single person that broke into the Senate Chamber should be arrested.

Rep. Linda T. Sanchez (D-Whittier) spoke on MSNBC from an undisclosed location in the Capitol where she fled once the mob stormed in.

Her voice shaking, Sanchez said she had called her husband Tuesday night to tell him where to find her will and last testament, in case the vote Wednesday turned fatal.

“It was just a premonition that there has been enough nasty rhetoric, inflammatory rhetoric by our president and by others to encourage this mob-like behavior, this riotous behavior,” Sanchez said. “I just knew that it probably would boil over, and I just wanted to be prepared. I wanted to have a plan.”

She said it was jarring to come to work for a procedural vote and have the event dissolve into a riot.

“This is not a normal, run-of-the-mill, garden-variety protest,” Sanchez said. “This is, in my opinion, a seditious, traitorous act to try to subvert democracy and to try to delegitimize the votes of every American
that participated in the last election.”

To complicate matters, Sanchez said, she left a crowd of her Republican colleagues, most of whom weren’t wearing masks, to move to a less crowded area to avoid the possibility of catching the coronavirus.