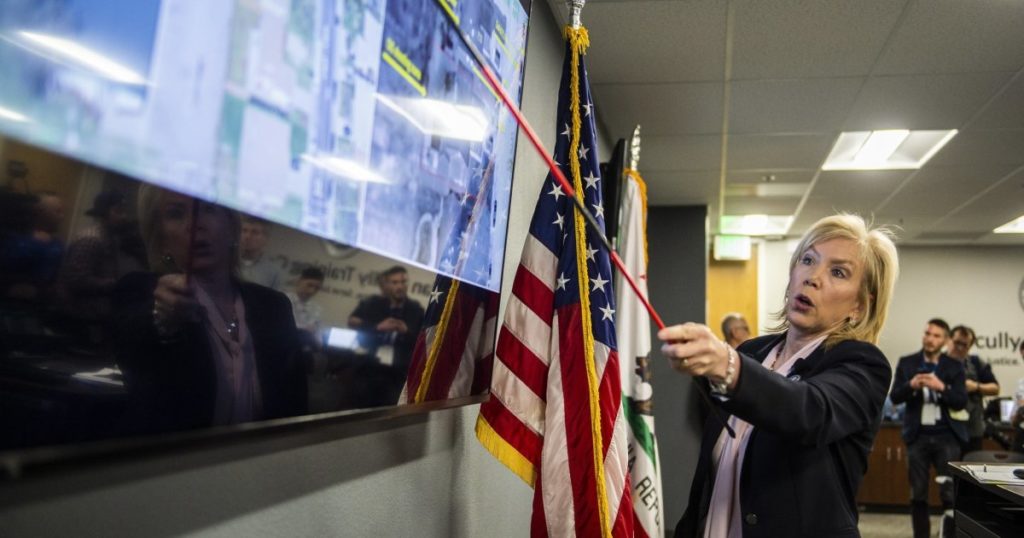 As plots are revealed inside California prisons and jails to scam pandemic unemployment benefits, district attorneys across much of California are calling on state leaders to help them stop, investigate and prosecute the fraud — aid they say has been slow to materialize as abuses continue.

“It’s a tsunami,” said Sacramento County Dist. Atty. Anne Marie Schubert, one prosecutor who fears the money stolen could be contributing to crime on the street. “Ultimately the bottom line is we need help.”

Multiple district attorneys interviewed by The Times said they are frustrated that state officials, including state Atty. Gen. Xavier Becerra, have not taken leadership in what some have described as the biggest taxpayer fraud in California history. Especially troublesome to some is that state agencies continue to grapple with how to share information with investigators — such as Social Security numbers that are needed to pinpoint inmates applying for benefits, a system used in 35 other states to prevent such abuse.

Officials with the administration of Gov. Gavin Newsom said a permanent legal solution to allow the sharing of data is being worked on. It could involve a change of state law or regulations at the prison agency.

California Department of Corrections and Rehabilitation spokeswoman Vicky Waters said the agency was “close to a solution” for sharing information with the Employment Development Department. “Our focus right now is to ensure anyone responsible for defrauding the state and hard-working Californians in this investigation is held accountable,” she said.

In a letter to eight prosecutors who went public with the fraud involving inmates recently after discovering it in November, Newsom said that the problem appeared on his radar screen about three months ago. Since learning of it in August, “I have been deeply alarmed about what has been happening and like you, I am committed to eliminating fraud in the UI system and the temporary federal unemployment benefits programs,” he wrote.

But prosecutors contend that without immediate action to allow investigators to compare EDD claims against inmate rolls, their hands are tied — potentially leaving money flowing from prison gangs to street gangs involved in drugs, guns and other crimes. Those interviewed by The Times said that although some of the alleged fraud may have been perpetrated by individuals, much of it appears to be organized, with multiple payments going to the same address.

“We are finding that the gangs are heavy, deep into this,” said Amador County Dist. Atty. Todd Riebe.

Riebe said he is looking at 500 inmates at Mule Creek State Prison in his Northern California county who may be involved in more than $2 million in fraudulent claims — though some of the proceeds have been sent to other counties and even other states. Though he has the number of inmates involved, he does not yet have their names because of the restrictions on sharing information.

Riebe said he is “like a thirsty man in the desert,” hoping the state takes action to allow him access so he can begin building cases.

Prosecutors also said that without additional funds and resources, they may not be able to pursue criminal charges in all instances of fraud.

Even in larger cities such as Sacramento and Los Angeles, the number of potential defendants and the labor-intensive nature of the investigations mean that prosecutors, with limited resources, are already having discussions on which ones to pursue and which to leave on the “backburner,” as Lassen County Dist. Atty. Susan Melyssah Rios describes it.

With more than 900 inmates at High Desert State Prison in her county implicated in possible unemployment fraud — totaling $4 million in benefits so far — Rios said her office of four lawyers is outmanned when it comes to prosecuting those potential cases. She said without state aid, she is uncertain how her office will handle the onslaught.

“The inmates … think they are running the show,” Rios said.

Multiple prosecutors questioned why Becerra has not taken a more prominent role because cases often involve multiple suspects and counties.

Mike Hestrin, Riverside County district attorney, said it “is obviously a statewide issue. It is everywhere. It is just not the counties with prisons. It is in every county, and it is having a big impact on every prosecutor’s office.”

Hestrin said federal prosecutors are working with a statewide task force of district attorneys in pursuing the cases, but state prosecutors so far have taken little interest. Ventura County Dist. Atty. Greg Totten added that while fraud has historically been a locally handled crime, the volume of the EDD problem is unprecedented.

“It is a good question why the attorney general isn’t involved.” Hestrin said.

Rios added that, “the part that I find the most offensive is just the lack of response or interest on the part of the [California] attorney generals’ office.”

Most district attorneys who spoke to The Times agree much of the money scammed so far will not be recovered, and little can be done to further punish prisoners who may already be serving decades or life sentences — leaving many eager to pursue accomplices on the outside who may reside in counties or states outside of local prosecutors’ purview. They also point out that the problem has probably spread through California’s 58 county jails, where some inmates serve short sentences, further complicating investigations because some of those incarcerated people might qualify for benefits.

So far, state officials said they have identified $400 million paid on some 21,000 unemployment benefit claims that were improperly filed in the names of California prison inmates.

Becerra’s representatives did not immediately respond Wednesday to questions about claims his office has declined to investigate some of the allegations.

It was late summer when evidence of EDD fraud in prisons appeared across California, according to prosecutors, investigators and others. It was uncovered largely by accident by investigators monitoring jail and prison phone calls as they looked into unrelated crimes.

In June investigators specializing in prisoner crime came upon a fraud operation inside the state prison in Lancaster where inmates were claiming unemployment. At first, it was believed to be a local issue. The Los Angeles County district attorney’s prisons unit became involved in identify culprits. Money had begun to show up on the books of inmates and informants, and telephone conversations captured by investigators led them to recognize the problem was more widespread.

Investigators uncovered a similar problem around the same time in a San Mateo County jail by listening to phone calls there. That case has led to the filing of charges against 21 people.

Also around that time in Lassen County, a prison investigator at High Desert was investigating a case.

That investigator happened to tell Rios, the district attorney, about it in an email Sept. 5, she said. Curious to know if other counties were seeing something similar, she sent a query over a listserv used by district attorneys.

The responses came back quickly. In Sacramento, Schubert quickly realized her own jails and prisons were probably affected. Having pulled together a statewide task force to pursue the Golden State Killer, JosephDeAngelo,only a few years prior, she once again spearheaded a collaboration in early November, drawing in McGregor Scott, the U.S. attorney for the Eastern District of California.

It was through that federal connection that California prosecutors were able to see the large scale of the fraud. The U.S. attorneys office had issued a subpoena on behalf of the U.S. Labor Department to the California Department of Corrections and Rehabilitation in September, allowing comparison of inmate information to claims for a five-month period through August.

Schubert said prosecutors received that information from federal authorities Nov. 12, and she spent the weekend looking through it for names she recognized from her own prosecutions.

“I kept looking for people I had personally prosecuted and getting more and more irritated,” she said.