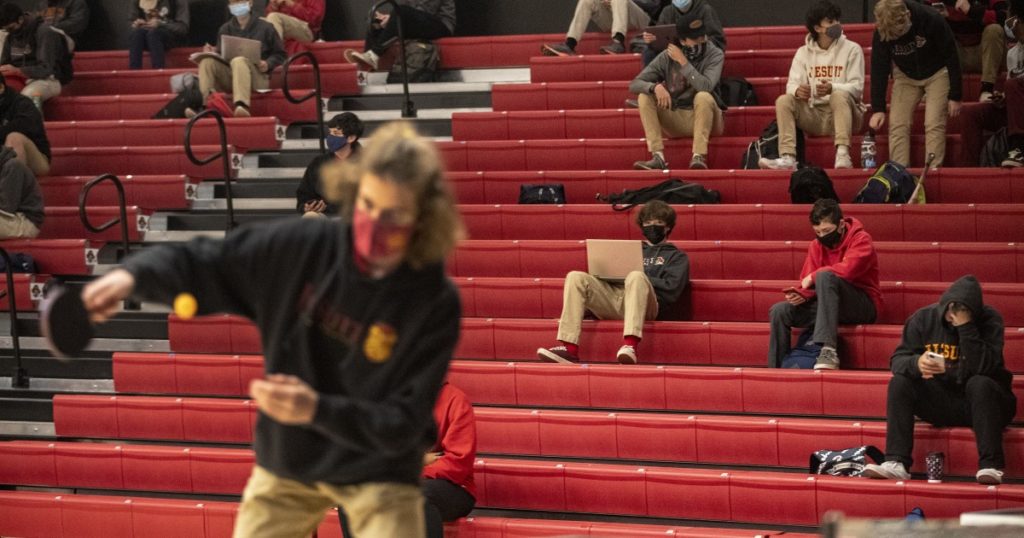 For the teenagers of Jesuit High School, every morning starts with a single-question exam — COVID-19 positive or not?

The routine at this all-male Catholic institution goes like this: Head back in the parking lot, swab up the nose, roll into the gym for pingpong and movies while waiting for test results.

“It’s a good model for other schools,” said Michael Wood, Jesuit’s principal. “If you want to open your campus, you have to do this.”

As the debate over reopening California classrooms continues, parochial schools such as Jesuit provide a possible road map for how their public counterparts can do it safely, especially for older grades where the challenges are greater. Studies indicate that teenagers can transmit the coronavirus more easily than younger students, and high school pupils are more difficult to keep in isolated groups because they often switch classrooms during the day.

So far at Jesuit, after two months of full-time campus life with about 800 boys and a semester of half-time before that, students, staff and teachers have rarely tested positive. Since the first day of screening in October, “Black Monday” as Wood calls it for its chaos, about 40 active COVID-19 cases have been found. But that has dropped to zero in more recent weeks under strict rules for both students and families.

Already, said Wood, about 10 other schools or districts have visited to learn from Jesuit’s experience.

The school’s record so far isn’t an anomaly. In Northern California, many parochial schools run by area dioceses or individual religious orders have been back on campus for months, with few hit by quarantines or outbreaks.

On March 1, Gov. Gavin Newsom and Democratic legislative leaders announced an agreement to give $2 billion in incentive funding to encourage public school districts to open in coming weeks, though mostly for students up to second grade, and billions more to help with other costs. For counties that fall from the state’s highest rates of virus transmission to the lower tier under state guidelines, access to that money would include opening all elementary and some upper grades.

Although it’s known that safe spaces, access to protective equipment, mitigation measures, testing and vaccines are needed to reopen schools, some groups engaged in the debate caution that public schools cannot easily replicate the strategies of smaller and less complex private institutions.

Public school leaders point out that with no state guidelines, each district is forced to work out its own reopening rules, often sparking disagreements with teachers unions, staff and parents. In January, six public school superintendents from across the state wrote to Newsom requesting state baselines, but so far, decisions are being hashed out at the local level.

“For me it’s not really a question of whether we can logistically adopt the same measures that private schools have put in place,” said Jorge Aguilar, superintendent of the Sacramento City Unified School District, which serves about 40,000 students. “For us, that lack of common standards makes it a bit more difficult.”

Equity is also an issue. Rates of transmission and deaths are higher in Black, Latino and economically disadvantaged communities, often the same areas where schools have smaller budgets, fewer resources, larger classes and problems like old buildings with poor ventilation. At the same time, though coronavirus cases among children have been rarer and less severe than for adults, evidence is mounting that children are not only susceptible but also can suffer long-term health consequences. Authorization for a vaccine for use on children is probably months away.

Claudia Briggs, spokeswoman for the California Teachers Assn., said forcing quick openings with incentive funding may “penalize” communities where rates of transmission are still high, or where plans have already been put in place for later returns. While the new state funding will help put safety measures in place, she points out that private schools may already be benefiting from wealthier families and neighborhoods where the virus hasn’t hit as hard.

A recent national survey by the USC Dornsife Center for Economic and Social Research found parents are starkly divided by race when it comes to reopening schools. While half of white parents preferred their children to receive in-person education, that dropped to 30% for Black parents and 23% for Hispanic parents.

Still, Lincoln Snyder, the superintendent of schools for the Catholic Diocese of Sacramento, said he believes reopening is difficult but doable. He’s in his ninth version of a protocol packet that spans 85 pages but has been approved by health officers in the multiple counties where his schools are located. Sticking to that plan is the key, he said.

Through a combination of testing and mitigation measures, more than 13,000 kids across 44 schools under his control have found themselves sitting at desks, playing tetherball at recess and “seeing my friends and doing fun activities,” as Kieran Ryan, a kindergartner at Mt. St. Mary’s in Grass Valley, describes it.

Set in the foothills north of Sacramento, Mt. St. Mary’s has been open since August. Buoyed by its success at managing the virus, the school added kids after winter break, many from families frustrated with online school.

On a recent morning, 194 children from transitional kindergarten through eighth grade filled the three-story brick building, once a home of nuns beginning in the 1800s. The playground has been divided so that kids can use it in small groups. A hand sanitizer station greeted students in the drop-off line. Intercom messages have replaced a morning assembly.

But other than kids in masks and one in a face shield, the Pledge of Allegiance in Megan Hood’s kindergarten room looks the same as it has for years. On her kids’ desks are plastic dinosaurs and green play dough to build a habitat for them. When a boy in the front row decides to visit the girl sitting behind him, Hood gives him a gentle reproof.

“Miles, have a seat, little man,” Hood says, and he quickly does.

It is that type of direct contact that Hood says makes her feel “blessed” to be teaching in person.

“How do you teach interacting with your peers on a Zoom call?” she asked.

Though Hood’s school also tests regularly, it has scaled back to once a month for teachers as case numbers in the community have fallen and no outbreaks have occurred within its walls.

Though tests have found some positive cases, so far they’ve been traced to sources outside the classroom, such as three kids infected at a slumber party. As parents have realized the potential consequences of their outside actions, Principal Edee Wood (no relation to Jesuit’s Michael Wood) said she has seen behavior change. No one testing positive wants to be forced to admit taking a secret vacation and being “the reason the school closed,” she said.

Jesuit’s Wood said that he’s seen a similar change in families’ behavior as they have realized that testing and tracing work.

At his school, within 25 minutes of the students getting their noses swiped, the dozen-strong staff of teachers and technicians from an urgent care center, working in a science lab down the hall, will process the rapid tests of and notify the lounging teens of results on their cellphones. In all, the morning regime takes about two hours. The all-clear means a semi-normal day of in-person instruction, though one in which masks and social distancing are still required.

If a test comes back positive for the coronavirus, it means quarantine, contact tracing and possibly weeks of online classes.

The extra work and the extra staff needed are among the biggest challenges of this testing program, Jesuit’s principal said. The first weeks came with tough lessons — including a slew of false positives caused by tests that grew too warm when placed under a window. But now, he said, the regime is so smooth that the school has become a vaccination site for the wider community, using its system to get the shots to thousands of people each weekend.

“There were moments of incredible pride and incredible doubt,” Michael Wood said. “Now it’s all pride and being grateful that we didn’t let the initial doubt stop us.”

Reopening also requires money, Snyder said. His elementary schools have tuition that averages about $6,000 annually and can drop as low as $3,000 per student in disadvantaged communities, where philanthropy helps cover costs. Jesuit, which Snyder does not oversee, charges about $16,000 annually.

When Snyder first began a districtwide testing program in the fall, the tests initially cost $25 per student — amounting to about $50,000 every time all students were tested. He was able to partly cover that bill with Paycheck Protection Program funds, but his diocese spent about $6,000 per student annually before the pandemic, leaving many facilities operating under a loss this year.

But recently, Snyder said a change in California regulation will allow him to purchase the tests directly from the manufacturer for $5 each and train school staffers on their use, a “game changer” for schools that invest in testing, he said.

Recent availability of vaccines is also helping. Snyder said it has been a morale booster by allowing teachers and staff “the freedom to be able to reunite with family and loved ones.”

But not all teachers have opted to take the vaccine. About half the staff at Mt. St. Mary’s have so far been inoculated, but math and language arts teacher Dave Pistone said he’s waiting a bit, in part because he believes his risk of exposure is offset by the school’s safety measures.

As his middle school students readied for a debate on the death penalty, Pistone stood near a bottle of 3% chlorine spray resting on a shelf filled with copies of “To Kill a Mockingbird.” He said when the school opened in the fall, “I swore that first week if we could make it to Friday I would thank God.”

Now, he thinks that the protocols are working “splendidly” and that kids and teachers are motivated to stick to the rules because they much prefer the in-person experience.

Taylor Brewer, a seventh-grader who came to Mt. St. Mary’s after winter break, said that he was stressed out at his previous school because he “couldn’t comprehend things as well” over Zoom.

Sitting in the front row of Pistone’s math room, filled with about 20 other kids, Taylor said being on campus offers “a sense of stability we like.”

Wood, the Jesuit principal, said the importance of healing from the pandemic — not just keeping safe from it — is one of the most crucial lessons he’s learned. The second semester, though partially back on campus, “lacked the joy and the fun and that’s what kids need to be having,” he said.

Wood said he realized that asking teenage boys for five straight days of strict rules was too much, especially after months of isolation. So Wednesdays are free from instruction, he said.

Last week, that meant a cornhole tournament on a lawn, and a food truck serving fat burgers dripping with cheese. The White Stripes and Outkast played on a tinny sound system, while about 100 boys tossed beanbags and hung out in the winter sunshine.

“Just knowing you are safe and able to be with your friends and brothers, you are at peace,” said senior Carlo Pedroncelli, a lacrosse player headed to the University of Nevada, Reno. “At the end of last year, I didn’t think any of this would be possible. It’s such a relief.”