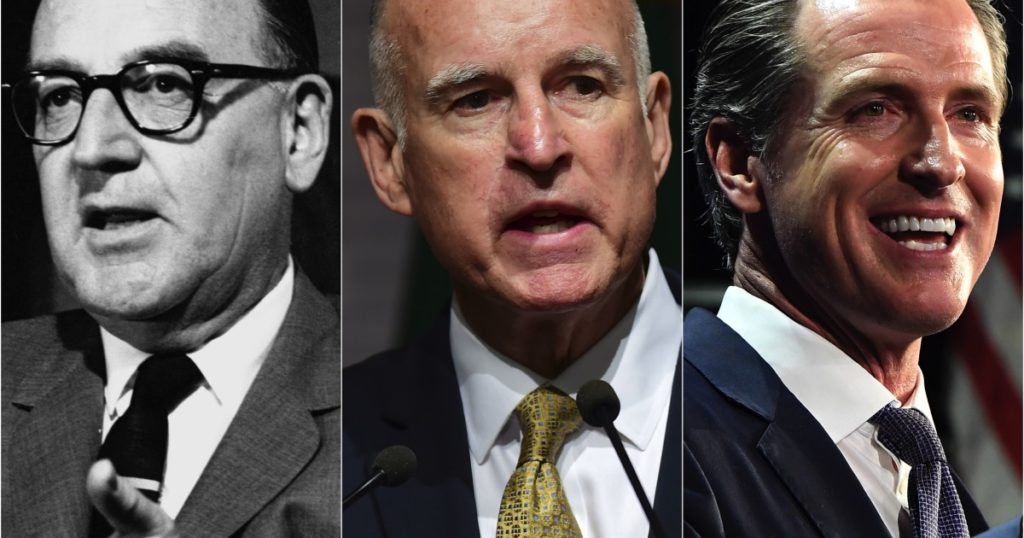 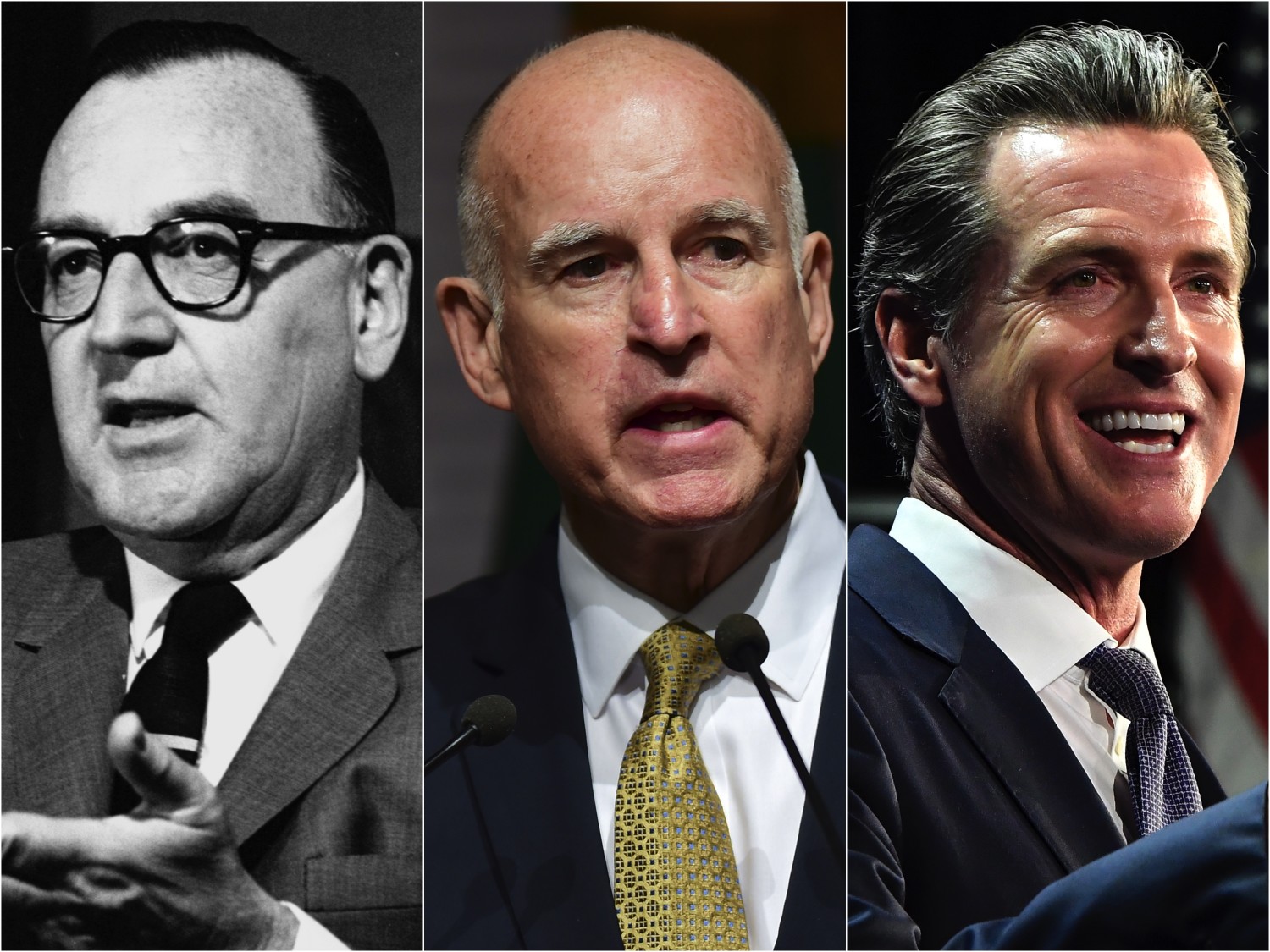 The death penalty runs like a sinuous thread through California politics.

The issue bedeviled two governors named Brown, Pat and his son, Jerry, whose Catholic faith weighed heavily on their stewardship of the state’s execution chamber. In 1986, a public outcry resulted in the recall of three Supreme Court justices who repeatedly barred the door and kept the chamber sealed shut.

For decades candidates vied to out-tough one another on the issue, even if it required the skills of an acrobat, professing moral opposition to capital punishment while vowing to vigorously enforce the law and ensure that California’s most heinous denizens were sent to their death. (Never mind that executions were rarer than the appearance of major comets.)

Gradually, the politics shifted. In 2012, San Francisco Dist. Atty. Kamala Harris was elected attorney general, the state’s top law enforcement officer, running as an avowed foe of capital punishment. (Even as she refused to take a stand on a ballot measure that sought to end the death penalty and replace it with life in prison without parole.)

Nothing, however, underscores the political sea change so much as Gov. Gavin Newsom’s current search for a new attorney general. The Democrat, who already had the chance to fill Harris’ Senate seat after she became vice president, will chose the successor to Xavier Becerra if, as expected, he is confirmed this week as secretary of Health and Human Services.

Newsom, who declared a moratorium on executions soon after taking office, is considering some of the state’s leading death penalty critics to replace Becerra, who shares his opposition to capital punishment. If anything, support for the death penalty may be a detriment to those hankering after the appointment.

“The politics have changed,” said Bob Shrum, a former Democratic campaign strategist who directs the Center for the Political Future at USC. “So has the composition of the electorate.”

He would know. In 1990, Shrum’s candidate for governor, Atty. Gen. John Van de Kamp, lost the Democratic nomination to former San Francisco Mayor Dianne Feinstein, who used her strong pro-death penalty stance to bludgeon Van de Kamp, one of those who tried to square the circle by pledging to set aside his personal opposition and support capital punishment.

It was a different time.

In 1988, George H.W. Bush carried California for Republicans for the sixth straight presidential election. The state’s center of political gravity was much closer to the middle, allowing a relative moderate like Feinstein to capture the Democratic gubernatorial nomination.

It was also a different place.

White voters, who are more likely to support the death penalty, made up nearly 80% of the electorate in November 1990, when Feinstein narrowly lost the governor’s race to Republican Pete Wilson. In November 2020, whites were just under half of those who turned out, as Joe Biden carried the state for the eighth straight time for Democrats.

Public attitudes toward the death penalty have also changed, as crime rates have fallen and issues of racial justice moved to the fore. The disproportionate number of people of color sent to death row, the many instances of wrongly convicted individuals being freed and the horrifying prospect of some innocent person being executed have become too much for many to ignore.

In 1990, nearly 8 in 10 Californians supported capital punishment, according to a Los Angeles Times Poll. By 2019, that number had declined to just over 6 in 10 in a UC Berkeley survey. When asked a different way, 62% of adults questioned by the Public Policy Institute of California said they preferred a life sentence as punishment for first-degree murder, compared to just over 3 in 10 who favored the death penalty.

Even so, in the last decade, voters have twice rejected state ballot measures to end capital punishment, with 52% opposed in 2012 and 53% voting no in 2016. To Kim Nalder, who directs the Project for an Informed Electorate at Cal State Sacramento, the outcome reflects a deep ambivalence about using the machinery of government to snuff out a human life.

“If something happened to someone close to them, they would want to do whatever is necessary, including possibly killing” whoever is responsible, Nalder said. (The impulse to strangle a perpetrator with their own bare hands.) At the same time, Nalder went on, there is deep concern “that the system is unjust in some way.”

Those twin sentiments — and the absence of any high-profile murders or crime sprees to inflame public opinion — have taken much of the edge off the death penalty issue, allowing Harris, Newsom and others to vocally oppose capital punishment without suffering grave political harm. Though Newsom’s moratorium on executions is mentioned in recall petitions, it’s just one in a litany of reasons critics give to short-circuit his term.

Newsom says he came to his position on the death penalty as a matter of principle. In an interview before announcing the moratorium, he told The Times’ Phil Willon he had done a lot of “soul searching” and recalled discussing the issue with his late father, a state appellate court justice and adamant death penalty foe, “ad nauseam.”

There is no doubting, however, the turn in the political tide.

In 2018, seeking reelection to the Senate and facing a challenge from the left, Feinstein revealed that she, too, had rethought her position. “Several years ago I changed my view of the death penalty,” she said. “It became crystal clear to me that the risk of unequal application is high and its effect on deterrence is low.”

It’s hard to see any statewide candidate running and winning in today’s environment by championing capital punishment, even if voters aren’t ready to shut San Quentin’s execution chamber once and for all.