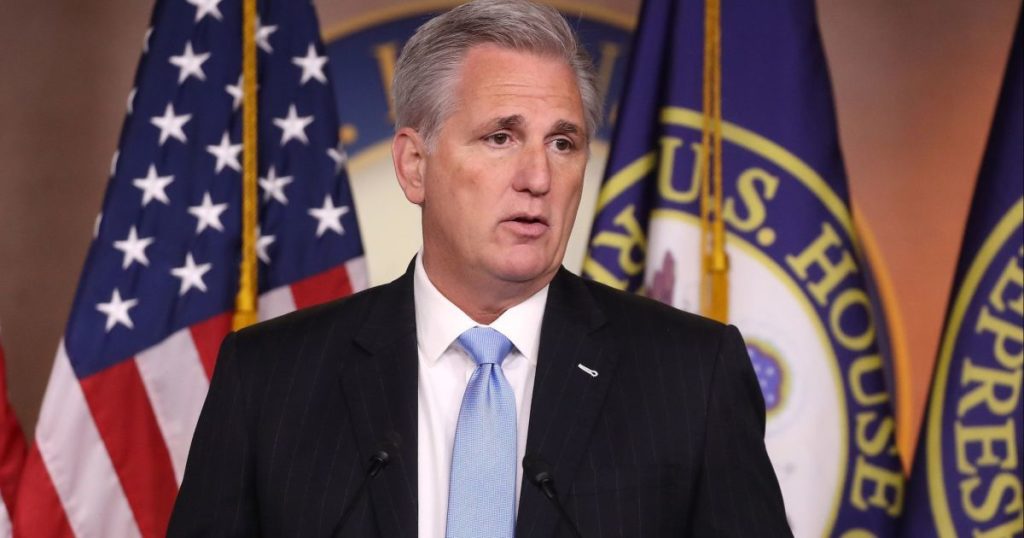 To U.S. House Minority Leader Kevin McCarthy, the general election was a resounding success for his party.

“Not one Republican incumbent lost,” McCarthy said during a news conference last week.

Except, of course, President Trump.

Now, more than two weeks after the election and several failed attempts to overturn it, the Bakersfield Republican still refuses to accept Trump’s defeat.

And closing ranks right behind him: the entire Republican delegation of elected leaders in California.

Their reactions range from enthusiastic support to quiet acquiescence. Some adopt a triumphant tone, like Shannon Grove, the state Senate minority leader, who tweeted images comparing Trump to Moses fighting a battle, saying she still believes the president will serve for “the next 4 years.”

Rep. Tom McClintock, of Elk Grove, took aim at mail-in voting during a House floor speech this week, calling it, without evidence, a “corrupted process” that allows ballots to be sent to “untold numbers of people who have moved or died.”

Most state Republicans, however, have remained silent, refusing to offer an explanation of their views even when asked. Of the nearly two dozen GOP members of the U.S. House and California State Senate contacted by The Times, only Rep. Doug LaMalfa (R-Richvale) and incoming member Darrell Issa (R-Vista) agreed to an interview. None have publicly congratulated President-elect Joe Biden, and several have amplified Trump’s unfounded claims of widespread election fraud.

Few would explain their contradictory stance, in which they claim that the presidential balloting was corrupt while at the same time claiming their own elections were legitimate.

The motivations for failing to support the outcome of the election may be chalked up to politically expedient posturing in the face of a potential Trump backlash, experts say, including among officials who are secretly yearning for the day they can abandon him.

Ron Nehring, the former chair of the California Republican Party, said he believes that while most Republican officials privately accept that Biden won, they “go where the voters are” when it comes to their statements, or lack thereof.

But critics, including former Republicans and election experts, roundly condemn the politicians, saying their actions represent a vivid display of how far right the party of Ronald Reagan has drifted.

“They have flocked together in their cowardice in the House and Senate for the past three or four years, so the fact that they remain in that formation isn’t surprising,” said Reed Galen, a co-founder of the Lincoln Project, a political action committee of Republican operatives working to unseat Trump, who has worked on campaigns for George W. Bush, John McCain and Arnold Schwarzenegger.

That political calculus is especially tricky for California Republicans who won congressional seats back from Democrats and must now figure out how to negotiate their relationship with Trump as they enter the Biden era. In deep-blue California, those victors may see their constituencies shift after the state draws new district maps next year.

One of the candidates who flipped a seat in Orange County, Young Kim, has braved criticizing Trump in the past, condemning his use of the term “kung flu” and opposing his administration’s separation of families at the border.

The other congresswoman-elect to unseat a Democrat there, Michelle Steel, has aligned herself with Trump, greeting him at the airport when he visited California in 2018 and downplaying the prevalence of COVID-19 and the importance of mask-wearing while serving as chairwoman of the Orange County Board of Supervisors. Kim and Steel did not respond to requests for comment.

Republicans are leading in two additional races — one in northern Los Angeles County and the other in the Central Valley — that are too close to call.

For those in deep-red districts, anything less than complete support for the president is unthinkable, experts say. It’s a matter of political survival.

“There is no small amount of self-preservation. Do they really want to come out and say something against Trump, or come out and tell the truth, and risk the ire of Trump, or Trump Jr., or Marjorie Taylor Greene?” Galen said, referring to the congresswoman-elect from Georgia who said face masks to prevent the spread of COVID-19 are “oppressive” and has supported the conspiracy movement QAnon.

The refusal to accept an election could set a bad precedent for the U.S., which is the world’s oldest democracy but has never experienced challenges to an election on such a scale, say political experts. The allegations of widespread voter fraud with virtually no evidence undermine public confidence and could set the stage for a further erosion of democratic norms.

“If the losers claim without evidence that they’ve only lost because they have been rigged out of victory, then it suggests that the next time around, maybe those who say they were cheated had better commit fraud as well because there are no rules,” said Larry Diamond, an expert in democracy and senior fellow at the Hoover Institution and at Stanford University’s Freeman Spogli Institute for International Studies.

Diamond said he’s worried not only about those who openly defy democratic norms, like Trump, but also those who are silent in the face of the attacks.

“You never see a breakdown in democracy without a good bit of spineless semi-loyal behavior on the part of actors who ought to know better,” Diamond said.

So far, McCarthy’s actions have paid off in Washington, even though some of his colleagues have viewed his tight alliance with Trump as a potential liability. He won reelection unopposed as House Republican Leader this week following his party’s strong showing in the House.

That showing included the election of two Republican Congress members who have expressed support for QAnon. The platform’s followers believe that the world is controlled by a ring of Satan-worshipping pedophiles, including prominent Democrats, who are plotting against Trump. McCarthy, who last week welcomed the lawmakers to the House Republican delegation, did not agree to an interview.

Former congressman Issa, who was reelected to Congress this month after a two-year hiatus, said it’s “only fair” for the president to pursue all possible legal remedies in determining the outcome.

“Just as Vice President Al Gore took 36 days to concede, and did not do so until he had exhausted all his appeals, I believe Trump has a right to his days in court. I would stand by anybody’s decision to do so,” Issa said, referring to the contested race between Gore and George W. Bush in 2000.

The 2000 election hinged on 537 votes in one state, Florida. Biden is leading by tens of thousands of votes across multiple states that Trump is contesting. Election studies show recounts, on average, change vote tallies by only a few hundred votes. Issa said his own margin of victory — around 28,000 votes equaling a nearly 8-percentage-point lead — was wide enough that he was not concerned that the outcome was in question.

Grove, the state Senate minority leader, tweeted several congratulatory notes for fellow Republicans, and has retweeted messages raising questions about voter fraud. One post from Nov. 10 said: “Are we really supposed to believe that Donald Trump flipped precincts in Beverly Hills California but couldn’t hold on to Erie County Pennsylvania?”

Melissa Melendez, a state senator representing parts of Riverside County, went on the attack against Democrats: “We all know what you’re doing. We are not going to let you cheat and steal this election,” she said on Twitter the day after the election.

A spokeswoman for Grove did not provide a comment to questions posed by The Times. Melendez’s communications director said her “schedule doesn’t permit” her to speak with a reporter about her views.

The Sacramento Bee slammed Grove, Melendez and LaMalfa in a recent editorial, writing that they must “admit reality, stop spreading divisive lies and respect the will of the voters.” Refusing to acknowledge the election results, the editorial board said, will “lead their party deeper into the fever swamps of absurdity.”

Rep. Devin Nunes (R-Tulare), long a Trump loyalist, has offered a relatively muted take on the results. In an appearance on “Lou Dobbs Tonight” on Fox Business Network last week, Nunes evaded several questions from Dobbs about why Republicans weren’t doing more to defend Trump in his election fight.

At the end of the seven-minute interview, Nunes asserted that several states were still “way too close to call” and said Democrats were performing a “well-choreographed play” to “cover” up the outcome.

A representative for Nunes did not return requests for comment.

LaMalfa said he’s not ready to accept the election results.

He conceded that “it might all be a long shot,” but that Trump has a “very skinny” path to victory. He said he would wait to see the outcome of the Trump campaign’s lawsuits in states like Michigan, Arizona and Pennsylvania and a recount underway in Georgia before accepting the result of the election.

LaMalfa just won reelection to the House, and said he trusts that he was elected legitimately because “the large cities are known for corruption,” but his more rural area is not.

Times staff writers Sarah D. Wire and Anh Do contributed to this report.