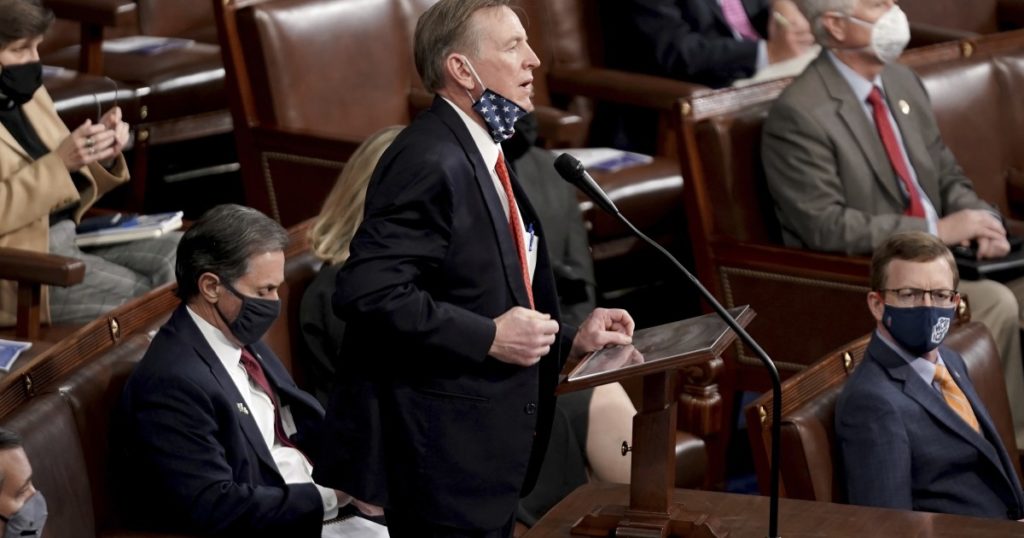 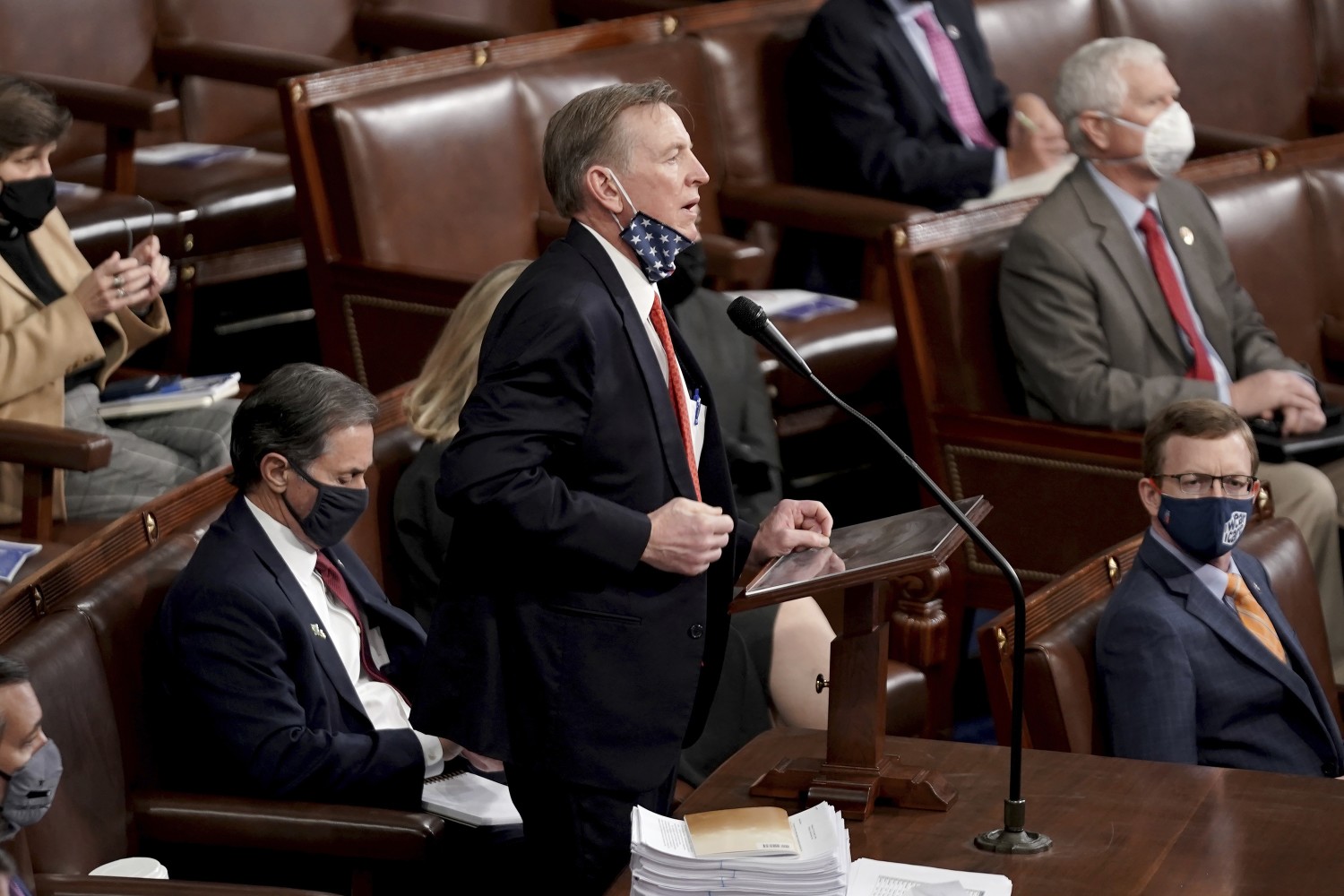 Arizona Rep. Paul Gosar, whose association with a Holocaust denier and white supremacist generated a new round of controversy on Tuesday, will be the featured speaker at a conference for an offshoot of the California GOP aimed at galvanizing young Republicans.

The California College Republicans, a chartered organization of the California Republican Party, will host Gosar along with other prominent conservatives July 9-11 at their convention in Las Vegas. Among those on the program is state party Chair Jessica Millan Patterson, who will address attendees via prerecorded video.

“Congressman Gosar is a leader of President Trump’s original movement to put Americans and our country first — before other concerns. We fully support President Trump’s America first message,” said Dylan Martin, communications director of the California College Republicans, in an email. “Hosting a sitting Member of Congress is great. Happy that a sitting Member of Congress is willing to speak to our students.”

The Arizona Republican has gained national attention for his ties to extremists and high-profile involvement in the “Stop the Steal” movement, which baselessly alleges that rampant fraud in the 2020 presidential election cost former President Trump the White House.

A website advertising the California College Republicans gathering features an image of Gosar on Jan. 6 objecting to the certification of the election, just before a mob of Trump supporters overran the Capitol in an attempt to block the formal recognition of President Biden’s win.

This week’s controversy centered on Gosar’s affiliation with Nicholas J. Fuentes, a far-right activist and online provocateur who espouses white supremacist rhetoric, such as lamenting that America is losing its “white demographic core” and sardonically likening the Holocaust to baking cookies in an extended metaphor to cast doubt on millions of deaths.

A spokesperson for Patterson declined to comment on Gosar’s planned speech before a state GOP-affiliated organization.

Jon Fleischman, former executive director of the state party and a prominent Orange County Republican who is Jewish, said he was disappointed to learn the student group was not concerned about the congressman’s links to Fuentes.

“If Gosar is coming to the College Republicans’ convention, they should have him sit while a Holocaust survivor speaks, and maybe Gosar takes that back to Fuentes and questions him for drawing an analogy between burning Jews alive and baking cookies,” Fleischman said.

A flier advertising a fundraiser hosted by Fuentes and Gosar made the rounds on social media Monday evening after being posted on Twitter by former GOP Rep. Denver Riggleman of Virginia, who condemned the congressman’s partnership with Fuentes as “dangerous.”

Gosar appeared to brush off the criticism in a tweet that night, writing, “Not sure why anyone is freaking out. I’ll say this: there are millions of Gen Z, Y and X conservatives. They believe in America First. They will not agree 100% on every issue. No group does. We will not let the left dictate our strategy, alliances and efforts. Ignore the left.”

On Tuesday, as the backlash grew, Gosar told CNN’s Manu Raju that he had “no idea what’s going on” and that he did not know of a planned fundraiser on Friday. According to Raju, Gosar did not answer directly when asked whether he would appear with Fuentes at all.

Fuentes spent much of Monday evening and Tuesday tweeting praise for Gosar and lashing out at his critics.

“I’ve done nothing wrong, I’m a real American Patriot,” he wrote. “The people lying about me are evil and hate our country. I will never bow to them and I will never apologize.”

Gosar headlined a gathering in February hosted by Fuentes, who billed it as an extremist alternative to the annual Conservative Political Action Conference. After Gosar’s remarks at Fuentes’ event, the host took the stage to praise the Jan. 6 insurrection as “awesome” and warned that America would lose its identity if it no longer had a white majority.

The next day, Gosar appeared at CPAC and said he “denounced white racism,” and told the Washington Post he attended Fuentes’ event to reach out to young conservatives.

Patterson, in her video address at the Vegas conference, will share updates on the effort to recall Democratic Gov. Gavin Newsom and other goings-on in the California GOP, Martin said.

Patterson made history in 2019 when she was elected as the first female, Latina and millennial to lead the state GOP. Showcased as the face of the modern state Republican Party, Patterson has made outreach to diverse communities a priority.

The College Republicans’ program will also feature leading Republicans such as Richard Grenell, who served as ambassador to Germany and acting director of national intelligence during the Trump administration and was appointed by Trump to the United States Holocaust Memorial Council. Carl DeMaio, a recall proponent and former San Diego City Council member, will also speak.

Attempts to reach Grenell, who has flirted with making a gubernatorial run in the recall election, were unsuccessful.

DeMaio said he looked forward to speaking to the group.

“It’s a great organization, and they want to hear about the recall of Gov. Gavin Newsom as well as other efforts to restore sanity in the state of California,” he said. “That’s the focus.”

Questions about appearing on the same stage as Gosar are irrelevant — an effort by the media to tar the college GOP group and divide Republicans, DeMaio said.

“I think your question is better asked of Paul Gosar and why he’s doing a fundraiser with Nick Fuentes,” he said. “I don’t think it’s relevant to anyone else.”