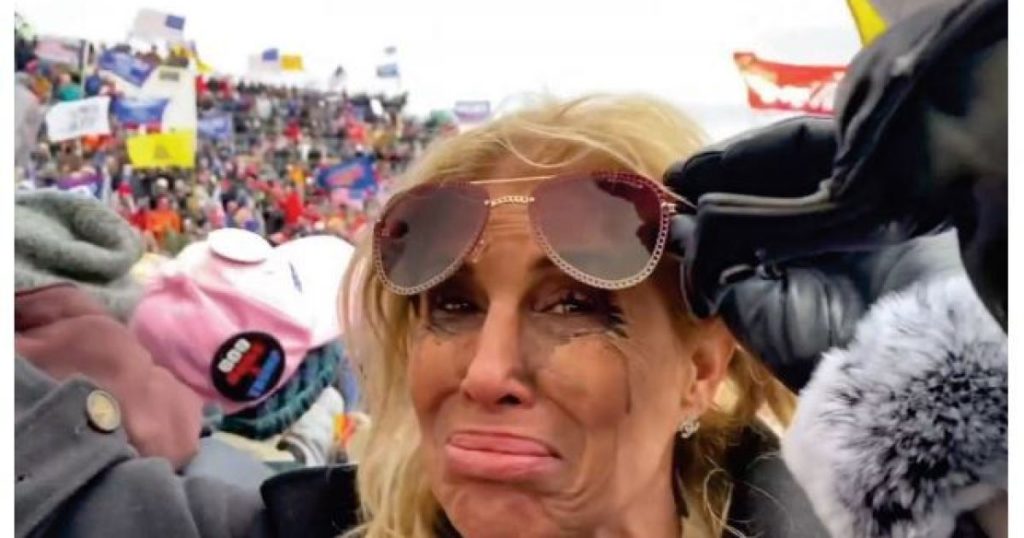 The four Southern Californians charged so far with joining the violent assault on the U.S. Capitol are an oddball crew.

There’s John Strand, a fashion model who displayed his six-pack on the cover of a raunchy novel, “Howl for It.” When photos emerged online showing his alleged participation in the siege, Facebook deleted his accounts, leading Strand to gripe on Twitter that he’d been “digitally assassinated.”

There’s Simone Gold, the Beverly Hills concierge doctor who crusaded against mask-wearing for months, only to be caught on video wearing one inside the Capitol as insurrectionists taunted police.

There’s Gina Bisignano, whose Beverly Hills salon for eyelash extensions and facials has suffered bad publicity since she was seen perched on the ledge of a Capitol window as a man next to her rammed a fire extinguisher into the glass.

And there’s Hunter Ehmke, a 20-year-old graduate of Glendora High School who was captured on video smashing his fist through another Capitol window. An acquaintance remembered him as a “sweet little boy” and wondered what went wrong.

Much remains unknown about what led the four to travel across the country and join the mob that stormed the Capitol on Jan. 6. No evidence has emerged that they were among the right-wing militia members accused of leading the riot in a conspiracy to block Congress from certifying President Biden’s victory over Donald Trump in the November election.

But they are all charged with “violent entry” into the Capitol and related federal crimes. All but Strand, who had not yet posted his $20,000 bond by late Wednesday, have been released for home detention pending further court proceedings in Washington or Los Angeles. Two other Californians in the Sacramento area have also been arrested for suspected participation in the riot.

Animated by Trump’s grievance politics, Strand, Gold and Bisignano have been high-profile activists on the noisy right-wing fringe of Republican politics in Los Angeles. Since last summer, each has taken part in Saturday afternoon pro-Trump rallies in a park in Beverly Hills, along with other protests against coronavirus lockdowns.

Strand, 37, an aspiring actor, was one of the rallies’ main organizers.

Scott Snapp, another leader of the weekly protests that sometimes turned violent, said he was not surprised that Strand wound up joining the Capitol siege.

“I thought he could be a little over exuberant,” said Snapp, an L.A. County Republican Party official. He called Strand “very bright, very passionate,” but said he’d cautioned him to “work within the system.”

On his website, Strand calls himself an “accomplished fashion & commercial model and actor” who grew up outside Denver. He lists unspecified work for vodka and hair care companies, a fashion line and singers Nicki Minaj and Will.I.Am.

The site features photos of him modeling, sometimes in just underwear. Its links to his Facebook and Instagram pages are dead, but one for Twitter yields a torrent of falsehoods about election fraud and the coronavirus pandemic.

“I am incredibly proud to be a patriot today, to stand up tall in defense of liberty & the Constitution, to support Trump & #MAGAforever, & to send the message: WE ARE NEVER CONCEDING A STOLEN ELECTION,” Strand tweeted on Jan. 6, attaching a selfie on the Capitol steps in a black leather jacket, pink scarf and aviator sunglasses.

Accompanying Strand that day was Gold, 55, a champion of hydroxychloroquine, the medication once promoted by Trump for treatment of COVID-19. The U.S. Centers for Disease Control says the drug’s risks outweigh any potential benefits.

“Anybody who tells you that hydroxychloroquine cannot save your life has been politicized,” Gold told a crowd at one of the Beverly Hills rallies, saying in a video posted online that anyone could “get their hands on” the drug by checking her website.

She offered to sign copies of her book denouncing “medical cancel culture.”

Standing on the side of the park’s lily pond, she also urged the Trump supporters, many of them in red MAGA caps, to avoid wearing a mask, which is recommended by public health authorities to stop transmission of the coronavirus.

“It absolutely cannot be kept out by a piece of cloth in front of your face,” she said.

On LinkedIn, Gold says she has worked as a “concierge physician” since 2012.

Video footage of the riot that prosecutors cited in court documents shows Gold and Strand just steps away from the spot where a Capitol police officer was screaming in agony as the mob crushed him against a door.

Once the officers guarding the door were overrun by the mob, Gold and Strand are seen walking past them entering the Capitol. Multiple other photos and videos posted to social media show Gold and Strand inside the building during the riot. In one video, Gold, in a tight corridor with police officers and insurrectionists, pulls a white medical mask over her nose and mouth and puts on sunglasses.

Gold later told the Washington Post that she regretted being there, but claimed she witnessed no violence.

Gold is the founder of America’s Frontline Doctors, a group that promotes her views on the pandemic, according to the organization’s website. Strand is its communications director.

Bisignano, 54, owns Gina’s Eye Lashes and Skin Care in Beverly Hills and says on the salon’s website that her goal is to help clients reach their highest “glamour potential.” A native of South Florida, she claims to have graduated from the Rhode Island School of Design.

She had a fleeting moment of social media notoriety in November, when she used a homophobic slur at an anti-lockdown rally outside the home of L.A. County Public Health Director Barbara Ferrer, sparking nasty comments on her salon’s Yelp page, along with a story on TMZ.

When a neighbor of Ferrer’s yelled “Nazis” and “Fascists” at the protesters, Bisignano responded through a bullhorn, “you’re so satanic” as her white Pomeranian scampered alongside her on a leash.

On Sunday, the day before FBI agents arrested her, Bisignano responded to critics on Yelp that she had not been expecting a riot at the Capitol, and wound up getting gassed and pepper sprayed in her high heels.

“My intentions were to protest not to be in the middle of a war zone!” she wrote.

Bisignano, who was photographed at the riot with dark eye makeup smeared all over her face, was identified by the FBI in part by the Louis Vuitton sweater she was wearing at the Capitol, court records show. Speaking through a bullhorn from the window ledge, she plugged her salon before telling the rampaging crowd ascending the steps, “We need weapons,” according to the records.

As for Emche, there was no immediate sign of political activism before he was charged with smashing windows at the Capitol.

He is the grandson of Bob Kuhn, a former Glendora city councilman. Glendora police and FBI agents arrested him last week at Kuhn’s house, where Emche was having dinner, according to the San Gabriel Valley Tribune.

Glendora police announced the arrest on the department’s Facebook page.

Carol Williams, a former aide to Kuhn, responded on the page that she remembered Hunter “as a sweet little boy.”

“It makes you wonder what happens if these people get radicalized or what’s going on,” she wrote. “He’s ruined his life for what? Trump? I hope he also gets the help he may need mentally. Prison time will not be fun.”