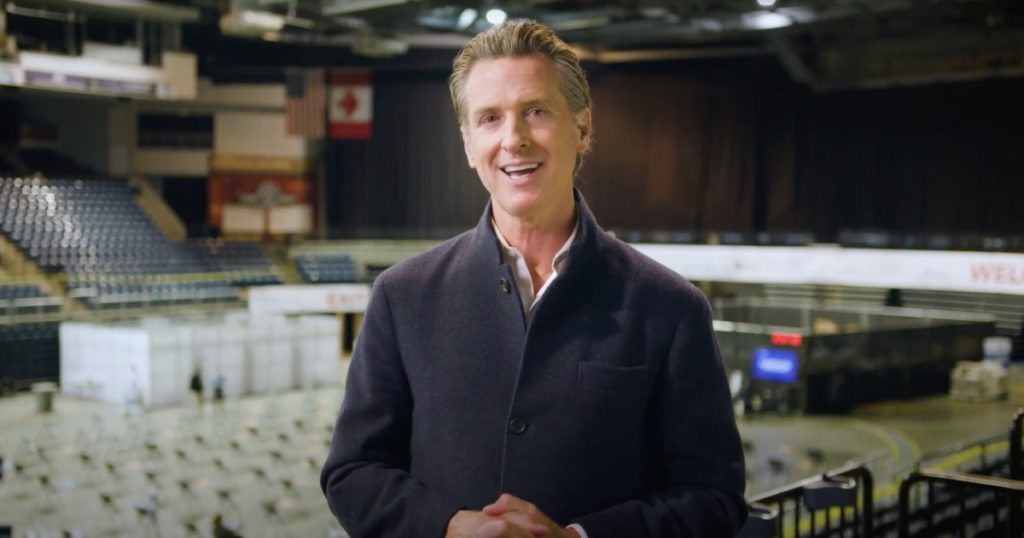 One after another, nearly every speaker at the California Democratic Party convention — a lineup that included the vice president of the United States as well as a grocery clerk — showered effusive praise on Gov. Gavin Newsom on Saturday as he fights an effort to oust him from office.

“Gavin and I go back to being elected at the same time in San Francisco, many, many years ago, and I’ll tell you, I’ve seen firsthand what a leader he is and how he really does put his heart into his work on behalf of the people of California,” said Vice President Kamala Harris. “And President Joe Biden and I support him 100%.”

The virtual convention took place days after the secretary of state announced that proponents had submitted enough valid signatures to put the effort to recall Newsom on the ballot later this year.

The governor criticized the effort as he argued that California was leading the nation in its response to COVID and would roar back economically once the pandemic was over.

“National Republicans and extreme right-wingers, they’re not sitting back, they’re throwing everything they can at their recall power grab, all in the hopes of rolling back all the important progress we have made together,” Newsom said, after a campaign-like video highlighted his efforts to fight the pandemic. “We can’t let them win. And if we place our faith over fear, perseverance and optimism over hate and division, the power — it’s in our hands.”

In addition to elected officials, the convention featured small-business owners, union members and activists who weighed in against the recall to an audience of more than 4,100 delegates.

“It’s unfortunate that Gov. Newsom is a focus of false allegations and an attempt to recall him from the job we elected him to carry out,” said Franky Carrillo, a criminal-justice reform advocate who was exonerated after spending two decades in prison for a murder he did not commit.

Carrillo said he met Newsom shortly after he took office and joined him at the state Capitol when he announced a moratorium on the death penalty.

“He is a champion for justice for all Californians. The Republicans are attacking him by spreading falsehoods, which is something we cannot stand for,” he said. “I know all too well where fear-mongering, lies and the abuse of the process leads.”

Proponents said the attention paid to the recall at the convention shows that Democrats are taking it seriously.

“It’s about time,” said Anne Hyde Dunsmore, a spokeswoman for Rescue California, one of the committees supporting the recall. She disputed Democrats’ branding of the effort as a Republican power grab.

“It’s a citizen power grab. Inside the bubble of their convention, they can feel as positive as they want about this, but what’s waiting outside the doors of that convention is a movement they have failed to fully comprehend,” she said. “And that is what has given us the edge in this effort. We are relatable to the citizens. They are routinely out of touch.”

Monetary reports filed with the state on Friday showed the backers ended the quarter with about $240,000 cash on hand, having spent roughly $5 million in the first three months of the year getting the recall qualified for the ballot. Newsom allies ended the first quarter with $2.5 million in the bank to fight the recall. Candidate fundraising activity will be reported later this year.

Former Gov. Jerry Brown delivered a message from his ranch in Colusa that lasted less than a minute without mention of the recall.

“We got rid of [President] Trump but we still got lots of problems,” he said, citing social inequity, climate change and children’s education. “This is the time not to be faint of heart, but to be resolute, to galvanize, to summon the political will to keep turning California around.”

Newsom at times had strained relations with Brown, notably when the two men ran for the state’s top executive post in 2010 and when Newsom later served as lieutenant governor under Brown.

Though the convention was virtual, planners inserted some interesting moments to keep delegates’ attention: “Star Trek” actor George Takei led the pledge of allegiance, the San Francisco Gay Men’s Choir sang the national anthem; a yoga teacher led a stretching session in the middle of the afternoon speeches.

In addition to the recall, elected officials also spoke about ending the filibuster, passing the American Jobs Act, enacting criminal-justice reform, fighting voter suppression and working to maintain Democratic control of the House in next year’s midterm elections.

“California is strong, our principles inspire us to lift each other up and fight for the most vulnerable,” said House Speaker Nancy Pelosi. “You know what we say, we don’t agonize, we organize.”

Harris reminded the crowd of the progress in the first 100 days of the administration, including widespread vaccinations, job creation and stimulus checks being sent to 30 million Californians.

“Let’s remember, winning elections is just the first step toward progress. Then we must govern,” she said. “And that’s exactly what we are doing.”