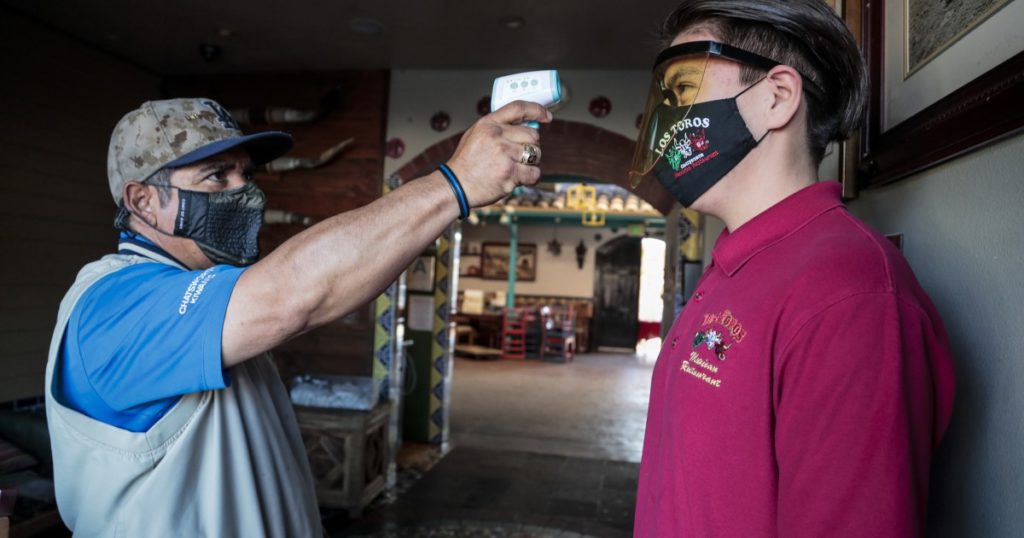 Millions of California workers are staring down the pandemic with no clear access to an economic safety net if they take time off, a situation that is deepening the state’s COVID-19 crisis and galvanizing policymakers to extend sick-leave mandates.

Federal and state measures that required most businesses to offer two weeks of paid leave to recover from the coronavirus, or to quarantine in case of exposure, expired Jan. 1. Golden State employees have since been left with three days of mandated sick leave for any illness, the state minimum, although employers may choose to give more.

With the virus continuing to infect thousands of Californians every week and dangerous variants spreading, the Legislature is set to vote in the coming weeks on whether to reinstate the two-week obligation. That follows weeks of debate in Sacramento that has drawn worker advocates and business groups into unusually broad coalitions, for and against.

The expected vote on a pair of bills now being finalized comes as Gov. Gavin Newsom faces a recall vote over his handling of the pandemic, especially on school and business closures, and the state’s COVID-19 vaccine rollout remains slow and uneven.

For many workers, California’s current patchwork of laws and regulations offers little protection beyond the three mandatory days. Some exempt small businesses. Others only cover employees who can prove they caught the virus at work. Several offer leave but with diminished pay or none at all — an option few can afford.

Under Centers for Disease Control and Prevention guidelines, most COVID-19 patients are advised to isolate for at least 10 days after the onset of symptoms, and in severe cases up to 20 days. But workers who can’t afford to go without pay will “go to work when they are not feeling well and create outbreaks that affect businesses and customers too,” said Assemblywoman Lorena Gonzalez (D-San Diego), a proponent of renewing the two-week leave.

“Community spread can only be kept down if people who are sick stay home,” she said.

Assemblyman Heath Flora (R-Ripon) calls two weeks an overreach. “We need to focus on getting our businesses back open before we start putting more burdens on them,” he said. “We can’t keep sticking it to the very people that keep our society moving.”

Sick-leave advocates had hoped an updated federal law would make a new California measure unnecessary. President Biden’s original $1.9-trillion coronavirus relief package contained a generous mandatory family and medical leave plank of up to 14 weeks. That requirement was left out of the bill moving through Congress as it would not pass muster under budget bill rules.

Only an extension of existing tax credits for employers who voluntarily offer paid leave is part of the bill now under debate in the Senate. The credit, available to businesses with fewer than 500 employees, would expire Sept. 30.

In Sacramento, the paid-leave bills would allow not just time off for a COVID-19 illness or quarantine but also time to get vaccines and care for sick relatives or children whose schools remain closed. Drafted as emergency budget items, the measures would apply retroactively to Jan. 1 and expire Sept. 30.

As his aides negotiate with legislators over the bills’ language, Newsom has yet to take a public stance. “Giving workers who have contracted or been exposed to COVID time off helps minimize the spread of the disease,” spokeswoman Erin Mellon said. “The governor’s office is engaged with the Legislature on a workable approach for employees and businesses.”

The issue heated up in Sacramento in January, when an alliance of 115 unions, community groups and social service nonprofits called on Newsom and the Legislature to immediately expand paid sick days or risk “more pain and suffering, more deaths, and continued economic devastation.”

The rebuttal came last month from a coalition of 112 groups led by the California Chamber of Commerce. “California’s response to COVID-19 cannot continue to be subsidized by the business community,” the group said in a letter to the governor and legislators opposing the bills. The bills offer no California-specific tax credit or funding to employers, although the state “has an approximate $20 billion budget windfall,” the letter said.

It was signed by the California Business Roundtable, the League of California Cities, state trade associations for manufacturers, farmers, retailers, restaurants and trucking companies, along with local chambers.

Chamber spokeswoman Denise Davis said workers already have access to “multiple sources of both paid and unpaid leave,” including paid time off under emergency COVID-19 rules adopted in November by the California Division of Occupational Safety and Health, or Cal/OSHA.

The Cal/OSHA rules cover workers who are infected at their workplace and remain available to work, but don’t grant them sick leave if they caught it elsewhere. They face a court challenge from the National Retail Federation and the National Federation of Independent Business citing “the absence of a proven nexus between COVID-19 positivity rates and workplaces.”

A hotly debated California law that took effect in January allows most workers job-protected leave to care for sick family members, but it is unpaid. A longtime family leave insurance program allows partial pay but no job protection.

The multiple statutes cause confusion, Wutchiett of Legal Aid at Work said. “Workers shouldn’t have to be lawyers to be able to figure out whether or not their job will be safe or if they’ll be paid,” she said. “Two weeks of emergency paid leave is the simple, straightforward, minimum protection they need.”

Small businesses are particularly worried about any new paid-leave mandate.

When indoor dining first shut down last March, Nicolas Montaño, owner of Los Toros Mexican Restaurant in Chatsworth, laid off half of his 70 workers. Now he employs 30 people for takeout and outside dining.

Over the last year, about 15 of his workers caught the virus, he said. He paid one employee a full two weeks of COVID-19 leave, a cook he wanted to prevent from leaping to another job.

Montaño, 60, whose parents founded the restaurant in 1967, said he did not pay most workers who got sick because “who knows where people get it? It’s ridiculous to blame the business. How do you know what they do on their day off?”

He opposes two-week paid leave, which he said encourages people to stay home. Los Toros has job openings because “people are so scared right now to go back to work.”

The restaurant took every precaution, Montaño said. “We wore face shields. We had social distancing. We had gloves. But it was a big yo-yo,” he said of shifting county rules. His business has lost more than half its revenue since the pandemic began.

Even before emergency sick leave expired in January, businesses and employees were often locked in conflict over coronavirus-related enforcement. Over the last year, workers have flooded government agencies with thousands of complaints, overwhelmed legal aid hotlines with questions and reached out to labor organizers for help.

The Center for WorkLife Law at UC Hastings Law School in San Francisco has seen a sevenfold increase in hotline calls since March, compared with the same period in previous years, all with COVID-19-related legal questions.

In Los Angeles County alone, the health department has investigated more than 1,500 complaints over COVID-19 outbreaks at workplaces. Cal/OSHA has dealt with more than 11,500 pandemic-related cases so far.

One has played out in a McDonald’s in a small community in the Antelope Valley.

Imelda Rosales, a janitor at the fast-food outlet on Pearblossom Highway in Littlerock, was among scores of masked fast-food workers who caravaned last month to the Los Angeles County Board of Supervisors building on Temple Street, waving American flags, honking horns and displaying signs reading: “Respect us. Pay us. Protect us.”

On a flatbed truck, Rosales, 53, a broad-shouldered daughter of Mexican immigrants, raised her fist and shouted into a microphone until she was hoarse, pleading for officials to pay attention.

“In my company, so many people — they get COVID,” she cried. “We’re in danger…. In my restaurant, they told us they were not going to pay us. Why not?”

Rosales has worked at the Littlerock McDonald’s for 11 years. She said she reached out to the Service Employees International Union, the protest organizer, after she got sick with COVID-19 in November. She believes she brought the virus home from the restaurant, infecting seven family members.

“Even my two grandchildren got sick,” she said.

Rosales was paid two weeks to recover. She said she was not paid for an additional two weeks she took off to care for her sick relatives, and she believes she is owed.

Workers at the restaurant have filed eight complaints with the county health department and Cal/OSHA over alleged COVID-19 violations including unsafe conditions, a failure to report infections, and sick leave denials.

According to the complaints, at least 31 employees have caught the virus, half of them at work. Employees were unable to keep six feet apart at the front counter, at the drive-in window or in the kitchen, the complaints alleged. The workers said managers told them to avoid asking customers to wear masks for fear of angering them.

“People were going missing,” Rosales said. “We would ask, ‘Where is so-and-so?’ The store manager would say, ‘I don’t know.’ Then we would find out the person had told the manager that they had tested positive.”

Andrew Marroquin, owner of McMarro Family Restaurants, a 1,400-employee chain that runs the McDonald’s, said that the complaints are unjustified and that just three workers at his Pearblossom outlet have tested positive for the virus.

He has paid “hundreds of employees for leaving for being sick — from mid-management to management to employees,” he said. He also pays workers to quarantine and to care for relatives, he said.

“I can name thousands of retailers and restaurants that have a few people there with COVID. I mean, that’s just the nature of the beast right now,” Marroquin said. Businesses are doing their best, he said, though “added costs and constantly changing safety regulations can be challenging.”

The Pearblossom dispute illustrates the challenge of enforcing leave laws, even if the Legislature mandates two weeks of sick pay for COVID-19.

County inspectors paid three visits to the McDonald’s outlet in December and found just one violation, later corrected, according to its reports: “Vents laden with dust in the men’s and women’s restrooms.”

Workers said no inspectors spoke to them about their complaints. Although Los Angeles County is among several California jurisdictions to adopt local paid-leave ordinances since January, a county spokesperson said: “Public Health does not manage complaints against employers related to paid leave. These complaints are managed by the State Labor Commissioner’s Office.”

A spokeswoman for the California Labor Workforce Development Agency, which includes the Labor Commissioner, said Cal/OSHA is conducting a “letter investigation” of the Pearblossom site — contacting the employer by email or fax to urge the adoption of precautions.

The short-staffed agency is using the procedure in 80% of its COVID-19 cases as there are “many more than can be investigated in person,” she said.