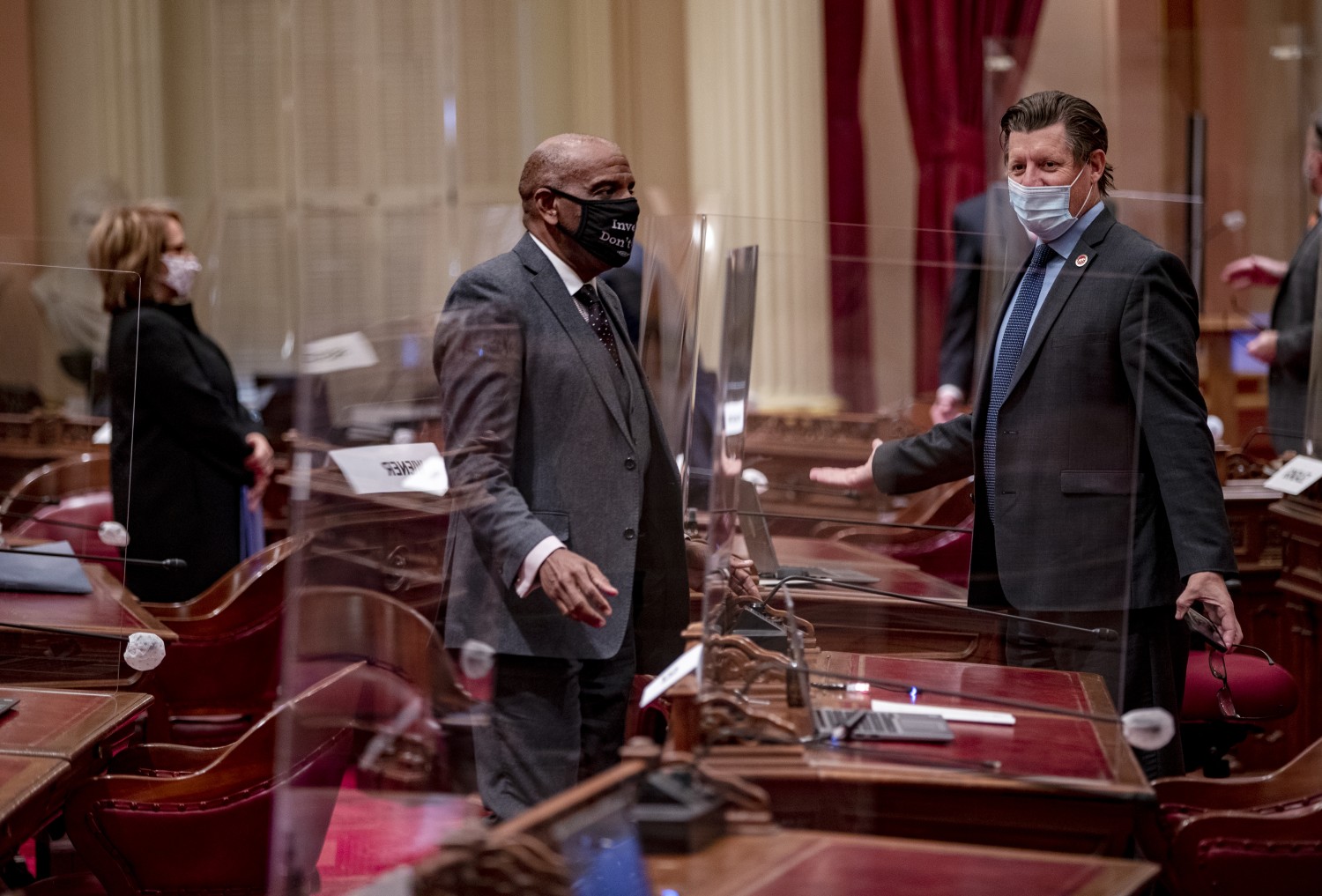 As millions of Californians return to in-person work with a requirement to say whether they’ve been vaccinated for COVID-19, legislators who represent some of those residents have refused disclosure, either ignoring the question or insisting their employers — the state’s taxpayers — don’t have the right to know.

In a survey conducted by The Times, 12 members of the California Legislature refused to disclose their COVID-19 vaccination status. Eleven of the lawmakers are Republicans, comprising almost 40% of all GOP members.

There are no current requirements that lawmakers get vaccinated, and a number of safety protocols are in place inside the state Capitol. Even so, there are few, if any, repercussions for legislators who choose not to vaccinate. Capitol guidelines advise lawmakers and staff to provide vaccination information to health officials, but members of the state Senate and Assembly have no traditional workplace manager and, for the most part, answer only to their constituents.

“I’m not going to, because it’s my choice,” said state Sen. Brian Dahle (R-Bieber), when asked Monday about why he refused to reveal whether he’s vaccinated against COVID-19.

Dahle and his wife, Assemblywoman Megan Dahle (R-Bieber), both declined to answer vaccination questions this week while the Legislature was in session. Several other legislators also rejected The Times’ repeated efforts to determine their vaccination status or to learn the reasons for their unwillingness to provide it.

“I’m not answering any of those questions,” Assemblyman James Gallagher (R-Yuba City) said as he walked toward an Assembly floor session.

Some of the legislators who wouldn’t comment revealed last year that they had contracted COVID-19. Last summer, Assemblywoman Autumn Burke (D-Marina del Rey) said that she had tested positive for COVID-19. Several weeks later, during the final days of the legislative session, state Sen. Brian Jones (R-Santee) revealed he, too, had tested positive.

Both Burke and Jones declined to comment on their vaccination status when approached this week in Sacramento and would not say whether they believe contracting COVID-19 provided them adequate immunity. At least three other legislators who also became infected with COVID-19 last year told The Times they have received a vaccination: Assembly members Tom Lackey (R-Palmdale) and Patrick O’Donnell (D-Long Beach) and state Sen. Josh Newman (D-Fullerton).

Burke was the only Democrat in the Legislature who would not provide information on her COVID-19 vaccination status — the rest said they have been fully vaccinated.

Because Democrats hold a supermajority of seats in both the Senate and Assembly, their near-total vaccination status as reported to The Times would mean at least 90% of the Legislature is vaccinated — far surpassing the percentage of the general public that has been inoculated. Slightly more than half of all Californians are fully vaccinated against the disease, according to state statistics released this week.

But data provided by Senate and Assembly administrators show the percentage of legislative vaccinations drops when adding staff members to the mix, putting the vaccination rate among the workforce of the Legislature at 85%.

Several Democratic lawmakers have been eager to talk about their vaccinations.

“The answer is hell yeah and I’m resentful of science deniers coming to the Capitol and infecting vaxxed people with COVID,” Assemblyman Marc Levine (D-Greenbrae) posted on Twitter after being contacted by The Times. “We have families. Don’t put everyone at risk.”

On Wednesday, a group of Democratic legislators posed for photos on the Capitol steps wearing T-shirts emblazoned with the word “VACCINATE.” A second photo showed the lawmakers throwing their masks into the air in celebration.

The effort comes on the heels of increasing concerns across the state about the rising number of COVID-19 cases sparked by the dangerous Delta variant and the tapering off of vaccination rates. In the past two and a half weeks, the Assembly has reported 10 confirmed cases of the virus. Four of those have been in people who said they were fully vaccinated. The San Francisco Chronicle reported Sunday that Assembly Speaker Anthony Rendon (D-Lakewood) is considering required COVID-19 vaccinations following the recent outbreak.

“There’s no question, at some point, that vaccinations are going to have to become mandatory” in workplaces, said David Magnus, a professor and director of the Center for Biomedical Ethics at Stanford University. “We just have to understand that this isn’t a matter of personal individual autonomy, this is a matter of public health. There has to be a balancing.”

The highest-ranking Republican in the Assembly, Assembly GOP Leader Marie Waldron of Valley Center in San Diego County, did not respond to repeated requests for information. But she has urged the Legislature to remain in session in Sacramento this year after last year’s public health shutdowns, participating in work that typically includes long hours in the state Capitol’s tight quarters.

“This year, lawmakers must get to work and stay at work despite the pandemic,” she said in a Facebook post in January.

Waldron and six other Assembly members refused to comment on their vaccination status. Aside from Burke, Dahle and Gallagher, The Times was unable to obtain information from Assemblywoman Laurie Davies (R-Laguna Niguel), Assemblyman Kelly Seyarto (R-Murrieta) or Assemblyman Thurston “Smitty” Smith (R-Apple Valley).

“I don’t discuss my medical records with anyone but my husband and my doctor,” Davies told a Times reporter.

A similar response came from Smith, whose spokesperson said in an email that staffers “do not disclose Assemblyman Smith’s personal health with members of the media or constituents.”

In the 40-member state Senate, all but five lawmakers said they are fully vaccinated, with inoculations disclosed by both Democrats and Republicans. The five who refused to do so are Dahle, Jones and Sens. Shannon Grove (R-Bakersfield), Melissa Melendez (R-Lake Elsinore) and Rosilicie Ochoa Bogh (R-Yucaipa).

Magnus said only those with underlying medical conditions and serious, well-established religious objections should be entitled to a COVID-19 vaccine exemption.

“Unless they meet those standards, then there is really no legitimate reason for them to not be vaccinated. Otherwise, they are doing something wrong that puts other people at risk,” he said.

For some Republicans, the topic of COVID-19 vaccinations could prove politically thorny when it comes to their supporters who might be skeptical of the safety or necessity of the vaccine.

Bogh, a first-term Republican who won in an Inland Empire district in 2020 where Democrats have a slight edge in voter registration, recorded a public service announcement this year touting COVID-19 vaccines as “one of our most powerful tools against this virus.” But she avoided taking a clear stand on the urgency of vaccinations.

“If you choose to get vaccinated, you should get the first one available to you,” the senator says in the video.

Californians who aren’t vaccinated, state and federal health officials say, should be wearing a face mask in public and maintain at least six feet of physical distancing. Many retail shops and other businesses have signs specifically requiring unvaccinated customers to follow mask mandates and physical distancing rules.

In the state Capitol, the rules require all lawmakers, staff and visitors to wear masks. Only when a legislator or staff member is alone in an office with the door closed, legislative officials said, can they remove their mask — a policy reconfirmed in the Assembly this month after the cluster of new cases.

Anyone who is unvaccinated or who declines to disclose their status must be tested twice a week for COVID-19, legislative officials said.

It’s unclear whether any of the dozen legislators who refused to discuss their status are not vaccinated against COVID-19. If so, photos that several of them have posted on their social media accounts could raise concerns about whether they are at risk for contracting the disease or spreading it to associates and constituents.

Both Sen. Dahle and Assemblywoman Dahle posted photos in May and June of themselves unmasked while with constituents in their rural Northern California districts, often standing shoulder to shoulder with local residents. Davies, elected last November to represent a portion of Orange County, posted similar photos over the July 4 holiday.

Seyarto, representing a Riverside County district where former President Trump won by double-digits last fall, posted photos on Facebook this month of various events where he was maskless, including photos showing others wearing masks.

Though disclosure of a private person’s vaccination status might rightly be limited to employers for most Californians, the equation changes for those who serve in elected office and are accountable only to voters, Magnus said.

“There’s nobody who they work for in the way other people do,” he said. “Politicians are in a very different category as public figures.”