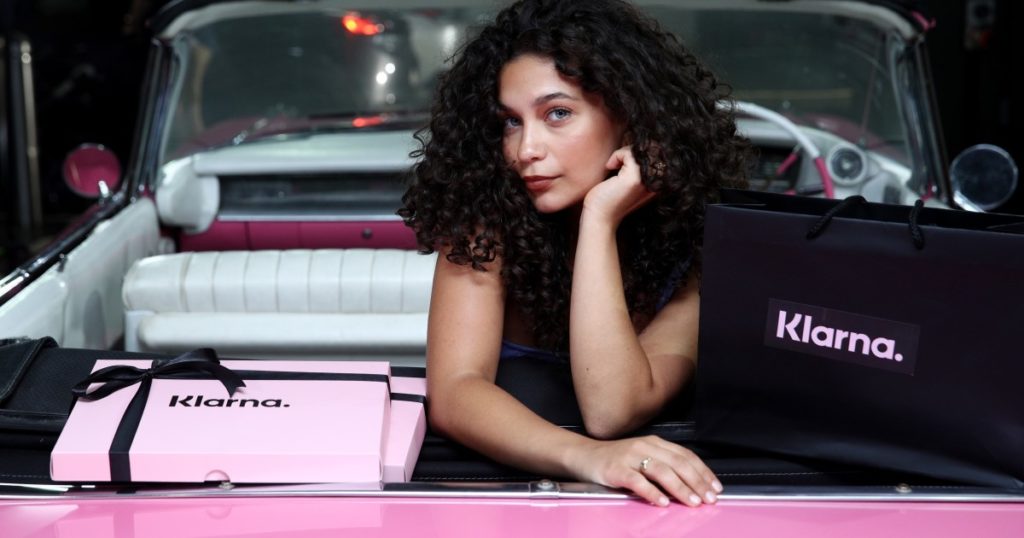 Alana Voechting, a 27-year-old nursing student, had never heard of Klarna when she noticed its bright pink logo while checking out at Sephora.com with $165 in skincare products.

Mounting medical debts from chronic health conditions left Voechting with money problems, so she was thrilled to learn the app would allow her to break the purchase price into four installments over six weeks — with no interest, fees or credit inquiries to ding her already subpar credit score.

“It’s like your brain thinks, ‘Oh, I’m getting this product for cheap,’ because you really only look at that first payment, and after that you kind of forget about it,” she said. “So psychologically, it feels like you’re spending so much less when you’re not.”

Soon Voechting began regularly using not just Klarna, but also similar services, including Quadpay and Affirm, to buy makeup, clothing, airline tickets and expensive lounge wear she acknowledged she “would not have purchased otherwise.”

Voechting is one of millions of young Americans with scant or subprime credit histories who are now using so-called buy-now-pay-later apps every month.

The smartphone-based services are an updated version of the old layaway plan, except users can do it all on their phones and — most appealingly — get their purchase immediately rather than having to wait until they’ve paid for it.

The companies act as middleman between retailer and consumer, making most of their profit by charging merchants between 2% and 8% of the purchase price, similar to the retailer fees levied by credit card companies.

The apps are taking off among millennials and Generation Z consumers attracted by the ability to bypass traditional credit cards and still delay payments with no interest.

Retailers such as Macy’s and H&M have jumped to partner with the services, which soared in popularity during the COVID-19 pandemic. Roughly 42% of Americans report using the apps at least once, according to a Credit Karma survey from February.

U.S. regulators so far are taking a wait-and-see approach, saying they don’t want to stifle a new financial product that could help consumers who might otherwise fall into predatory lending schemes.

But regulators in Europe and Australia, where many of the companies first launched, are increasingly concerned the apps are extending credit irresponsibly.

Using celebrities such as A$AP Rocky and Keke Palmer to portray the services as a hip alternative to the “gotcha” fine print of credit cards, the apps could promote overborrowing in a generation already struggling with high debt and poor credit, consumer advocates warn.

And despite claims that users’ credit ratings won’t be affected and that there are no hidden fees, experts say consumers can still face late charges, overdraft fees and debt collection. Some apps, such as Quadpay, charge a $1 transaction fee on every payment made, regardless of the amount.

“It sounds too good to be true, and it is, in many ways, because there are perils for people who use this,” said Jamie Court, president of Consumer Watchdog.

The apps offer different repayment options, but the most common links to a user’s debit card and makes automatic withdrawals every two weeks. Problems quickly arise when there is not enough money in the account, potentially resulting in charges by both the user’s bank and the app.

Voechting said that for the most part she has been able to control her spending and keep track of when her payments will be withdrawn, a challenge when dealing with multiple purchases and multiple apps.

But this year, she missed a payment with Quadpay on a $120 order from Beautycounter because she failed to change her payment information in the app after receiving a new debit card.

Sixty days later, she was informed the installment would go to collections unless she paid off the full remaining balance of $54, plus a $10 late fee. Voechting promptly gathered the money, fearing more damage to her credit.

Services boast that users’ activity and debt are not regularly reported to major credit bureaus. That’s appealing to consumers under pressure or already cut off from traditional lenders.

But not reporting on-time payments also means that users don’t see their credit scores increase as they demonstrate a track record of responsible borrowing, a critical hurdle for younger consumers.

And the apps may report missed or late payments for some payment plans, which can hurt users’ credit scores, according to a clause buried deep in terms and conditions agreements for Quadpay, Affirm and Klarna.

The Credit Karma survey found about 38% of buy-now-pay-later customers had missed at least one payment, and 72% of those users reported seeing their credit score drop afterward, though many factors can cause fluctuations.

For instance, if a credit card company refuses to offer credit to a potential customer, it must disclose why the application was declined. No such rules currently apply to the apps, which authorize every purchase on a case-by-case basis. That means users have no assurance a transaction will be approved.

“They don’t know what the issue is,” said Angela Hunt, 31, of Hampton, Va., part of a Facebook group devoted to Klarna, where members frequently complain they are denied approval for purchases in a seemingly random manner.

App users also don’t enjoy the same billing-dispute protections they would with other payment methods, so returning merchandise, resolving fraudulent charges and requesting refunds can be difficult.

In January, Brittany Conn, 30, was moving into a new apartment in Melbourne, Fla., and used Klarna on Wayfair to buy a bed frame, headboard and bookcase for $450.

The bookcase never arrived, so she reached out to Klarna to get a partial refund. Multiple agents promised a supervisor would contact her, but the call never came. When she tried to publicly request help on Klarna’s Facebook page, she said, her comments were deleted.

If Conn had made her purchase with a credit card, the lender would have been forced to respond immediately, launch an investigation and explain their final determination within two billing cycles. During the process, she would be entitled to withhold payment on the disputed amount.

It took Conn, who works in customer service, nearly two months and many emails and online chats to get her money back. She filed a complaint with the Better Business Bureau.

“It was just an uphill battle, just email after email and chat after chat, and it got to a point where my chats weren’t being answered anymore,” she said.

According to the Better Business Bureau, Klarna — the largest app in the U.S. with 15 million customers in 2020 — received 676 complaints in the last 12 months.

Quadpay received 979. Affirm had 227 and Afterpay and Sezzle saw more than 100 complaints each.

By comparison, Discover, a well-established credit card brand with more than 55 million customers, saw 532 complaints with the Better Business Bureau in the same period.

The rise in users — and complaints — has brought more scrutiny to the apps.

Consumer complaints prompted regulators in other countries to crack down. Sweden enacted a law last year that bans online checkout portals from making the apps the default payment option.

Australian financial experts authored a report in November that found 20% of app users surveyed “cut back on or went without essentials” to make their payments on time. The United Kingdom released a nearly 70-page report in February concluding that “urgent and timely” regulatory changes were needed.

U.S. regulators say they are aware of the services, but are exercising caution.

“We’re really interested in use cases of buy-now-pay-later where perhaps a consumer that would otherwise go to a payday lender and pay a very high cost for a loan might be able to use it,” said John McNamara, principal assistant director of markets at the Consumer Financial Protection Bureau, or CFPB.

In July, the CFPB released a blog post titled, “Should you buy now and pay later,” warning consumers that the apps can charge late fees, report to credit bureaus and do not offer the same protections as other credit products.

Laura Udis, who manages installment loan programs at the CFPB, said the apps are subject to the Dodd-Frank Act, passed in 2010 after the subprime mortgage crisis to prevent unfair, deceptive and abusive practices by lenders. She said the law “should be flexible enough to apply to any particular credit situation, including new innovations like buy-now-pay-later.”

But the services have found loopholes in existing regulation.

For instance, the Truth in Lending Act, which requires lenders disclose the terms and costs of services, states that payment plans of fewer than five installments are not subject to ad disclosure requirements as long as they avoid certain terms.

Consumer advocates say that explains why many apps are structured as four installments. And the companies actively help merchants avoid terminology that would trigger greater disclosures.

Affirm offers its merchant partners a guide. Quadpay has a variety of pre-made promotions for merchants to download that won’t trigger disclosures.

Ira Rheingold, executive director of the National Assn. of Consumer Advocates, said it may take time for regulators to sort out how current lending laws apply to the services, and whether new ones are needed.

Lawmakers so far show no signs of getting involved. Spokespeople for multiple congressional committees said they were not considering regulating the apps.

California’s regulators are among the few U.S. watchdogs that have taken substantive actions against the services. In 2019, the state’s Department of Business Oversight, now the Department of Financial Protection and Innovation, sued Sezzle, Afterpay, Quadpay and Klarna for making illegal loans.

Each of the companies ultimately settled and had to get licensed, refund fees collected from Californians and pay fines.

“Today, the buy-now-pay-later companies we license in California are required to take into consideration a borrower’s ability to repay the loan and are subject to strict rate and fee caps,” said DFPI spokesperson Maria Luisa Cesar.

As regulators and lawmakers determine how best to keep up with the growth of the apps, their popularity endures. Voechting, Hunt and Conn all said they will continue to use them.

“It’s kind of nice to be able to say, ‘Oh, you know, I can’t afford to buy this right upfront, but I can split it up into four payments and afford it that way,’” Conn said.

Before the apps, Conn would spend weeks saving money for special purchases. The apps allow her to get products immediately.