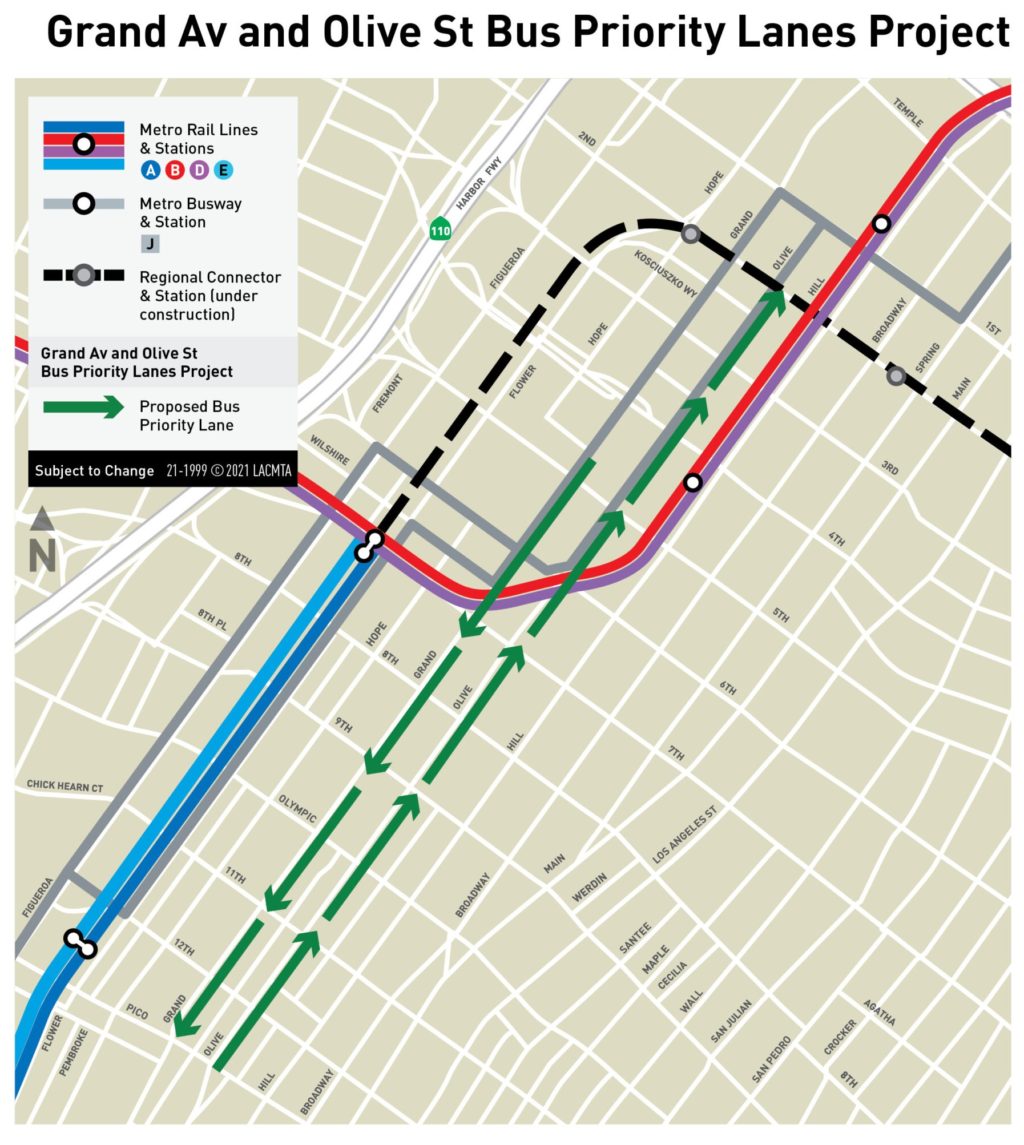 Downtown L.A.’s Olive Street and Grand Avenue will see new bus-only lanes before the end of 2021. The lanes will operate from 7 a.m. to 7 p.m. on weekdays.

The Grand-Olive bus lane couplet was announced last May. When L.A. City repaved these one-way streets last summer, existing bike lanes were moved to the left side (Grand, Olive), and some right-side striping was done in paint instead of more long-lasting thermoplastic.

Last night Metro and the L.A. City Transportation Department (LADOT) convened a public meeting to share project information and receive public input. Metro staff stated that Grand and Olive currently see 60 buses per hour at peak times; these include Metro, DASH, and other municipal bus operators. Metro anticipates that the new lanes will lead to a 15 percent improvement in the speed of bus travel, as well as improved reliability. Metro staff described project outreach that they conducted both on board buses and at bus stops, as well as with property owners along the streets.

Overall the public comments at the meeting were positive. Several downtown L.A. residents praised the project. Some asked to go even further: why not operate the lanes 24/7? Why not extend bus lanes further north on Grand to include the Bunker Hill arts area? Can parts of these streets get additional crosswalks too? Metro and LADOT representatives responded by emphasizing that the quick-build nature of the current improvements would not preclude doing more in the future.

When questions about noise came up, Metro staff gave an impromptu update on the delayed electrification of the Metro J (Silver) Line, which runs on Grand and Olive between Wilshire Boulevard and First Street. A few years ago, J Line electrification was planned to be completed by the end of July 2020. Today, there are still no electric buses running on the J Line, though Metro has received some electric buses slated for use there. In June, the Metro board approved additional funding to clear remaining hurdles for the electrification pilot. But last night, Metro staff announced that they already know that they will miss the agency’s revised December 2021 date for all-electric buses on the J Line.

Metro representatives stated that the Grand/Olive bus lanes were scheduled to open in Fall 2021, in “November or so… by the end of the year.”