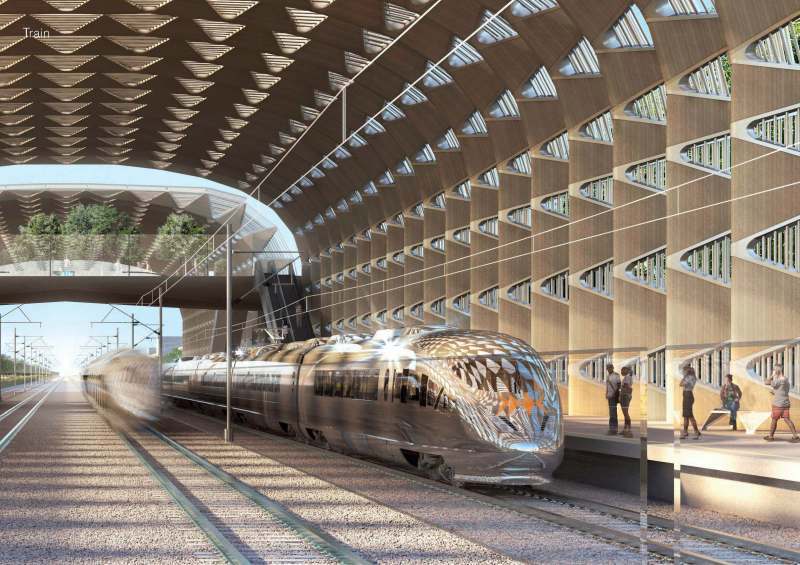 “It’s not just a line between Los Angeles and San Francisco,” said Amit Price Patel, of the architecture firm DIALOG, during a SPUR talk Tuesday afternoon about the role of high-speed rail (HSR) in mid-to-small cities. “Each city can amplify what’s attractive about it, to bring people from the whole state to their cities.”

HSR will shrink the distances between the L.A. and San Francisco, making Merced, Bakersfield, and Fresno just a short trip away by train, as the time map below shows.

In Europe, HSR has transformed smaller, less-well known cities into destinations for meetings, tourism, and business. Montabaur, Germany, for example, located halfway between the major cities of Frankfurt and Cologne, has about 12,500 people. High-speed trains suddenly placed Montabaur within easy reach of both large cities. “It really connected Montabaur directly to Frankfurt, a big employment center,” explained Heidi Sokolowsky of the Urban Field Studio, who was also at Tuesday’s talk.

The train suddenly made the smaller city a more desirable place to live and visit.

But not all on its own. Just building the train and plopping down the station isn’t enough. Sokolowsky explained that Montabaur station was thoughtfully placed in a greenfield at the edge of town, between a freeway and the historic core. Development was planned to fill in the gaps and a carefully thought-out pedestrian street helped connect that with the historic core of the city.

She said that this kind of successful implementation can be emulated in cities such as Fresno, creating a spine between the station and Fresno’s old downtown, reconnecting neighborhoods. “It will connect the two sides – located right in downtown, on the other side of Chinatown. It’s a great opportunity to bring the two neighborhoods together.”

But despite geographic similarities, planners can’t simply grab the blueprint for a station in Germany and plop it onto Fresno and other cities of the Central Valley. They have to be very careful to integrate the station with local history, architecture, and the environment. “Build a station of its time and place,” said Patel. “Reflect the place and culture of where they’re located.”

So that might mean emulating or complementing the historic style of the neighborhood and embracing what’s already there; if the station is being built in a converted warehouse district, maybe connect the station directly to a warehouse space that can become a community center or a retail space. And above all make sure it has high ceilings and air conditioning, to deal with the 100-plus temperatures of the Central Valley. In other words, train stations have to be attractive, comfortable, and maybe even a little fun. “They’re portals into the broader region. Elevate the identity of each place. Make statements of what’s unique about those places,” said Kokila Lochan of VIA Architecture.

The panelists said there will be a need for car parking, but it shouldn’t be right next to the station–instead, put it a distance away, and make sure transit and bike-share and amenities are closest. “Integrate transit and make everything seamless,” said Margaret Cederoth, with the California High-Speed Rail Authority.

A “right sized” parking lot or structure can also do some work to help activate spaces, if it’s a sufficient distance away from the station, since people will have to walk between it and the station to catch their trains. They might do some shopping or get a coffee along the way. Just be sure to “…make the immediate station bike and pedestrian friendly,” said Patel.

The speakers also stressed the need for flexibility–with appropriate zoning so high rises full of retail, housing, and office space are options that can be built even after the new station is completed.

The takeaway was clear: HSR can’t just be about trains. It’s equally important to be thoughtful about building stations and working with cities to develop and integrate the area around them.