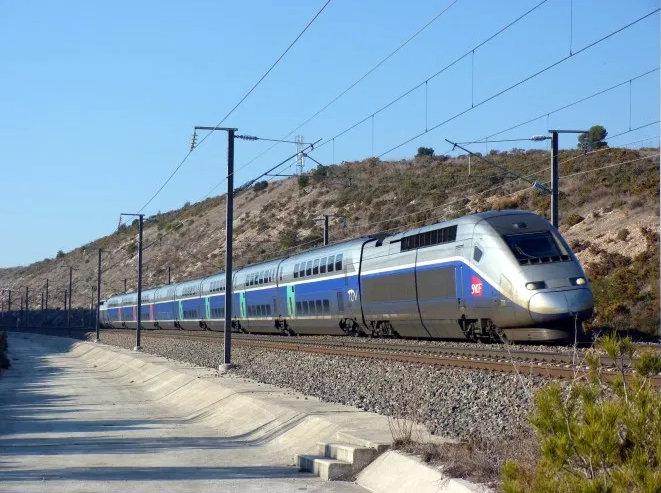 With some 1,000 workers busy completing over 100 miles of High-speed Rail alignment in California’s Central Valley and billions more on the way from the Biden Administration to accelerate and finish the project, opposition has gone from surreal to silly. Take the latest digs at HSR, the first courtesy of gubernatorial candidate Caitlyn Jenner, from an interview with Fox News. Apparently, in her view, the state doesn’t need HSR because it only takes 50 minutes to fly from Los Angeles airport to San Francisco airport.

Jenner wrecks again, fortunately this time it was just a TV interview:

As reported in Business Insider about her Fox “News” talk:

The interview, which took place in Jenner’s private plane hangar near Malibu, California, was meant to promote her run for California governor against Gavin Newsom in a special recall election.

“Here’s my crazy thinking. We are now spending billions of dollars on this high-speed rail, OK, and they talk about it all the time, between LA and San Francisco. And I’m going, ‘Why are we doing that?’ I can get on a plane at LAX, and I’ll be in San Francisco in 50 minutes. Why do we need high-speed rail?” Jenner said, referring to an ongoing project meant to transport travelers from Anaheim and Los Angeles to San Francisco in under three hours.

It’s not so much crazy thinking as ignorant. Not that nitpicking is really necessary, but the shortest scheduled flight between SFO and LAX is one hour and 19 minutes. Clearly, Jenner is conflating how long it takes her in a private plane to fly between San Francisco and Los Angeles, not the reality for the 40 million plebs in the state. And then there’s the little matter of getting to and from the airports and the time wasted in security theater, boarding, de-boarding, etc., none of which she has to deal with getting to and from her private hanger. Then there’s the pollution caused by aviation.

And there’s the fact that HSR isn’t just about getting between LA and San Francisco–local trains will also serve Fresno, Bakersfield, etc. and the 7 million people who live in the Central Valley. HSR will give them a fast, clean, electric alternative to driving. And that reduces the rate of crashes, since rail generally is ten times safer than driving, and high-speed rail is safer still.

Jenner should at least understand that last point, considering nearly 4,000 people die every year in California in crashes like the one she caused through her inattention in 2015, which killed 70-year-old Kim Howe.

And the latest from wreck-it-Ralph Vartabedian:

Meanwhile, California’s favorite anti-HSR-propagandist Ralph Vartabedian’s latest screed jumps on a trifle about how the state is selling the number of jobs created by the project. From his latest story in the El Segundo Times, entitled “California bullet train isn’t the jobs creator some claim:”

Atop massive viaducts and bridges under construction for the bullet train in the San Joaquin Valley, the state has hung banners proudly proclaiming “5,000 workers and counting.”

The slogan is catchy, but misleading. The state rail authority has never had anywhere near 5,000 construction workers on the high-speed rail project at any one time. A review by The Times also found other transportation programs generally employ more workers for every $1 million in spending.

The nuance is apparently that the 5,000 number is an accumulation of how many different people are called from union halls to work on the project. In reality, at this moment, there are “only” 1,000 or so highly paid craftsman working on the project. That of course is just a measure of direct employment that doesn’t even count the thousands of others who feed those workers, fix their trucks, build their houses, etc. and otherwise gain employment through the construction.

Some numbers directly from the HSR Authority:

That said, it’s not credible to think that Vartabedian wrote a piece clarifying a job boast on a banner just because he wants to set the record straight; it’s been pretty clear, for many years, that his only interest in HSR is to keep throwing mud at it.