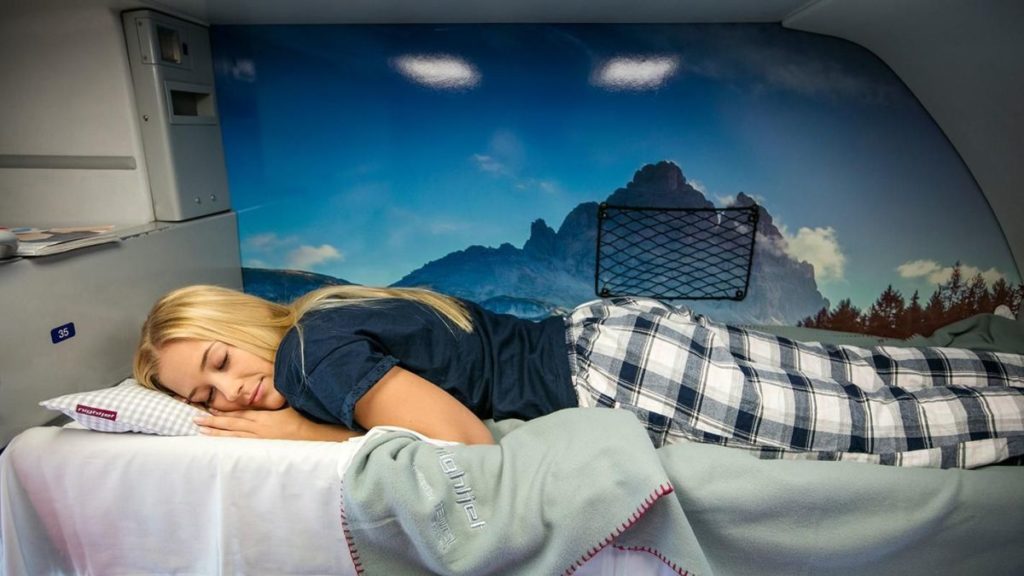 Rail operators in Europe are reviving an old solution to reducing emissions: bringing back more overnight trains. From a CNN story:

Spearheaded by Austria’s ÖBB, in conjunction with Germany’s Deutsche Bahn, France’s SNCF and Swiss Federal Railways, the collaboration will see four new “Nightjet” routes over the next four years. By December 2021, Vienna-Munich-Paris and Zurich-Cologne-Amsterdam will be up and running. Two years later, a Vienna/Berlin to Brussels/Paris will launch. And in December 2024, sleeper trains will start running between Zurich and Barcelona.

Health officials are saying that even once COVID vaccines are widely available, masking and social distancing will continue for some time. Trains with private sleeping compartments are now the only form of public transport where people can relax and take off their masks.

As Streetsblog has reported previously, there is a desire for overnight rail service between Northern and Southern California, as evidenced by the San Francisco-to-Santa Monica “Cabin” sleeper bus. But it had problems because of the realities of rubber-on-asphalt–the buses were too cramped, too bumpy, too noisy, and too subject to the vagaries of morning traffic jams.

The state also had two overnight rail services in the past, the Lark and The Spirit of California, which ceased running in 1983 because of budget cutbacks. Currently, it has only one direct train between Oakland and Los Angeles: the Coast Starlight. That train has compartments with beds, but it runs during the day. It takes about 11 hours, so it’s useless except for the most leisurely of travelers. But the schedule could be changed to turn it into an overnight run, allowing passengers to sleep through the journey.

Moreover, because of Amtrak’s cutbacks, there are sleeper cars from other cross-country trains sitting around doing nothing, many spending nights in storage yards in Oakland and Los Angeles. Amtrak has also had to furlough employees. So basically the sleeper trains and staff to run them already exist.

One of the problems with this idea has been the lack of a state-wide rail agency to fund and manage it. California’s rail services, such as the Capitol Corridor between the Bay Area and the Sacramento region, are run by regional authorities. “A single California Passenger Rail Department (CalPaRD) for rail systems that provide service beyond one county’s borders? That’s overdue and could be a hugely important force in synchronizing the modernization and ensuring technical and scheduling compatibility of what will have to be the major source of sustainable inter-regional transport in the future,” wrote rail advocate and retired politician Rod Diridon in an email to Streetsblog. “Newsom and Biden’s support and carbon disincentive funding could be pivotal if we’re ready.”

Even once High-speed Rail is finished, someone might opt to zoom from San Francisco to Los Angeles in under three hours, spend the day there, and return late that evening on a sleeper train, arriving home early the next morning. A traveler might also opt to do a sleeper train to get to an early morning meeting and fly back. And while fares on sleeper trains can be expensive–the Nightjet is about $170–they’re a bargain if they eliminate the need for a hotel.

As the recent COVID numbers make clear, it’s going to be a slow grind before life returns to “normal.” But overcrowding at airports and on freeways will be back with a vengeance soon enough. Given our climate emergency, the restoration of overnight service in California seems like a no-brainer and an obvious opportunity to help address some of these problems. It requires no new technology, no new staff to train, and no new equipment or infrastructure. And with the election of Amtrak-Joe Biden, there might even be federal stimulus dollars to do it.

Let’s learn from the Europeans and bring back an old-but-trusted, low-emissions solution to intercity transportation: bring back the night train.