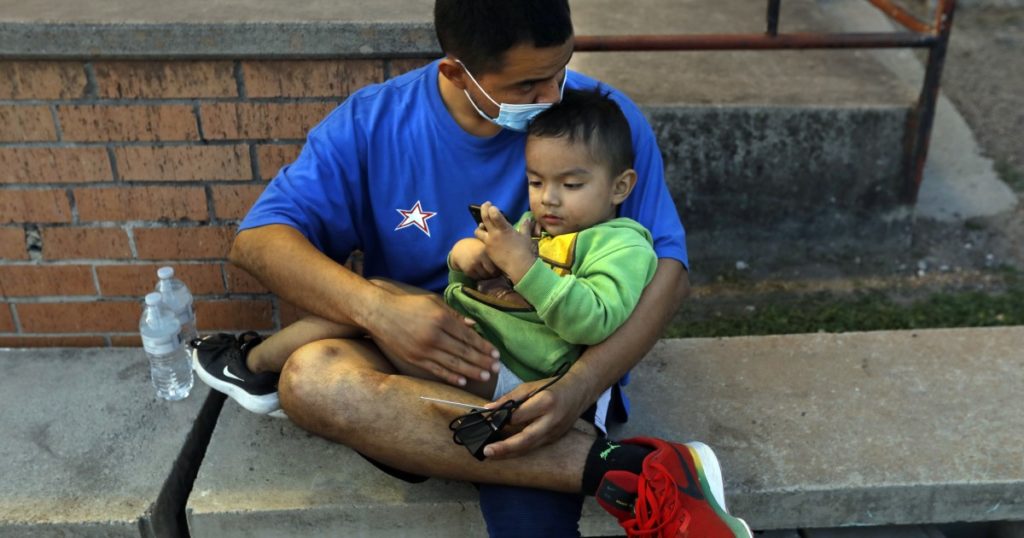 Amid an increase in migration that has overwhelmed U.S. immigration officials, hundreds of migrant families, including newborn babies and pregnant women, have been detained for days under a border bridge in Texas’ Rio Grande Valley.

Up to 600 families were assembled in recent days at the site under the Anzalduas International Bridge in Mission, Texas, sleeping in the dirt, exposed to the elements, without much food or access to medical care, according to several people who said they were released this week by U.S. Customs and Border Protection.

“We asked them why we were there for so long,” Karen Coello, 24, of Honduras, who had been kept at the site for three days with her 5 year-old daughter, Valeria, said Tuesday after being released to a local shelter. “All they told us was, ‘That’s your problem.’”

Carla Montoya Sierra, also from Honduras, said they were not allowed to leave the bridge from Saturday to Monday night along with at least a dozen others with whom they had crossed the Rio Grande on Friday. Another woman and her 3-year-old daughter had spent four days there, they said.

A spokesman for Border Patrol who was authorized to speak only on background said it was “not the norm” for migrants to be held under the bridge for days.

“No one should be there longer than 24 hours. We really don’t want them to spend the night there,” he said, but sometimes local shelters are closed and migrants have to stay the night. “Our goal is to move them out every night.”

He said hundreds of migrants are held at the site, which was created so that agents could easily expel eligible migrants to Mexico via the bridge. Children unaccompanied by adults are not taken there, he said, and paramedics are stationed there with a first aid kit.

Montoya and her 6-year-old son, Juan Ramon, were still wet from crossing the river on a raft when agents dropped them under the bridge, she said. Fellow migrants gave them sweaters, but as the temperature dipped at night, they caught colds and began coughing, as did other migrants, she said.

Montoya, 29, asked agents to help her, but “they said they’re not required to do anything because we chose to come from our countries,” she said.

When she and other migrants said they feared for their children’s health, she said, agents replied, “They’re not going to die.”

Migrant children have died in government custody. During a period of increased migration in 2018, more than half a dozen migrant children died in Border Patrol holding areas. The death of 7-year-old Guatemalan migrant Jakelin Caal Maquin was reported first by the news media. Rep. Joaquin Castro (D-Texas) later said that then-Homeland Security Secretary Kevin McAleenan had failed to reveal Jakelin’s death during testimony before Congress.

At the bridge site in Mission, there were no telephones for migrants to use or representatives from Central American consulates for them to speak with, they said, unlike at other large Border Patrol holding areas in the past. Some migrants had cellphones, but they had to place them in sealed property bags Border Patrol forbade them to open.

Some migrants asked a Border Patrol nurse assigned to the area for help, but he said that he didn’t have any medicine and that only migrants who were seriously ill would be taken to a hospital, said Rocio Lopez, 24, a Salvadoran migrant who was told to stay under the bridge for three days with her sons, ages 2 and 11 months.

Rep. Nanette Barragán (D-Los Angeles), who has toured Border Patrol holding areas during past periods of increased migration, was outraged to hear migrants were detained outside for days.

“Migrants arriving at the border seeking asylum should not be kept outside under a bridge,” Barragán said in a statement Wednesday. “I understand that the inflow of people is greater than the current capacity at [Border Patrol] processing facilities right now. But we need to do better.”

The latest reports of substandard conditions come after Border Patrol and the Department of Health and Human Services — responsible for sheltering migrant youths who arrive without adults — have refused requests by media outlets to visit their facilities, including some of the sites where the same agencies hosted press tours during past periods of increased migration.

Homeland Security officials released a statement saying they have “discouraged external visitors in [Border Patrol] facilities, including media ride alongs, due to agency COVID protocols and in order to protect the health and safety of our workforce and those in our care.”

Half a dozen migrants held by Border Patrol under the bridge this week said that after crossing the river, they turned themselves in to Border Patrol agents who drove them to an overcrowded new tent holding area in Donna, Texas. The facility is supposed to house 250 people during the pandemic but was holding nearly 4,000 this week, according to Border Patrol figures reviewed by The Times.

Photos of the inside of the overcrowded building showing migrants sleeping shoulder to shoulder on pallets lining the concrete floor were released this week by Rep. Henry Cuellar (D-Texas) after he visited. Cuellar was not allowed to bring members of the media.

More photos and video of the site were later released by Border Patrol. Migrants said that agents there recorded their vital information and that medical staff checked their health and tested them for the coronavirus. Youths who had migrated without adults stayed, while families were driven to the bridge to await their release, the migrants said.

Border Patrol has refused requests by The Times to visit the area under the bridge. The agency created a similar open-air holding area under a border bridge in El Paso when migration rose in 2019. The American Civil Liberties Union of Texas interviewed dozens of migrants kept at the site and filed a complaint that led to an investigation, a critical report and the site’s eventual closure.

This week, the ACLU of Texas filed a Freedom of Information Act request with Homeland Security demanding to know how many migrants were being held at the bridge in Mission, for how long and under what conditions, said ACLU of Texas lawyer Shaw Drake.

“We cannot put families with children in corrals outside for days,” Drake said by phone from El Paso, adding that the government has been “blocking access to an agency that has a history of abusing people when they’re not being watched.”

During past periods of increased migration, often highest in the Rio Grande Valley, The Times requested and was granted access to shadow Border Patrol agents and to attend media tours of migrant holding areas. It also toured federal shelters for migrant youths, including a tent shelter outside El Paso and a shelter in Carrizo Springs, Texas, both of which later closed.

Including those sites, the administration says it has added about 8,000 beds for migrant youths in recent weeks — but with at least 11,551 youths being held at federal shelters as of Wednesday and a current total capacity of 13,500, figures reviewed by The Times indicate the agency may run out of space within weeks.

Border Patrol is taking young migrants without parents into custody faster than they can be transferred to federal shelters or released, according to figures released Wednesday.

The agency is currently detaining 4,962 children, many longer than the 72 hours permitted under court settlements. That doesn’t include children from Mexico, most of whom are quickly sent back by U.S. authorities.

This week, ahead of Castro’s visit to the Carrizo Springs shelter with a congressional delegation, his staff requested media access and were denied.

“The team is working hard to determine how to safely open these shelters to press,” said Beth Lynk, a spokeswoman for Health and Human Services.

Barragán, who chairs a Homeland Security subcommittee, said she’s asked Border Patrol “for the conditions under which they may consider allowing press direct access to their facilities.”

“Shining a light on the conditions creates urgency in solving the problems,” she said. “There are real and valid health and safety concerns that [Border Patrol and Health and Human Services] must take into account due to COVID, as well as privacy concerns for the migrants, especially the children. However, they should not be used as a bar to press.”

Migrants said they were relieved when Border Patrol agents finally decided to release them.

Lopez’s husband, Guillermo Alejandro Valle, recalled shivering under the bridge with his young sons, cold and dirty, unable to sleep. Valle, 24, said his time there felt like part of the price he had to pay to join relatives in Los Angeles — in addition to the $12,000 smuggler’s fee he raised by selling his house.

“This is how we suffer to get here,” said Valle, a supermarket worker, after Border Patrol released him at a local shelter Tuesday, where he washed and changed into donated clothes.

Montoya was staying at the same church shelter, on her way to join her sister in Maryland.

She said her time under the bridge “was the worst part of my journey, the lowest point.” At no other time as she traversed Mexico did she sleep in the dirt, she said, not even when she stayed with smugglers near the Rio Grande.