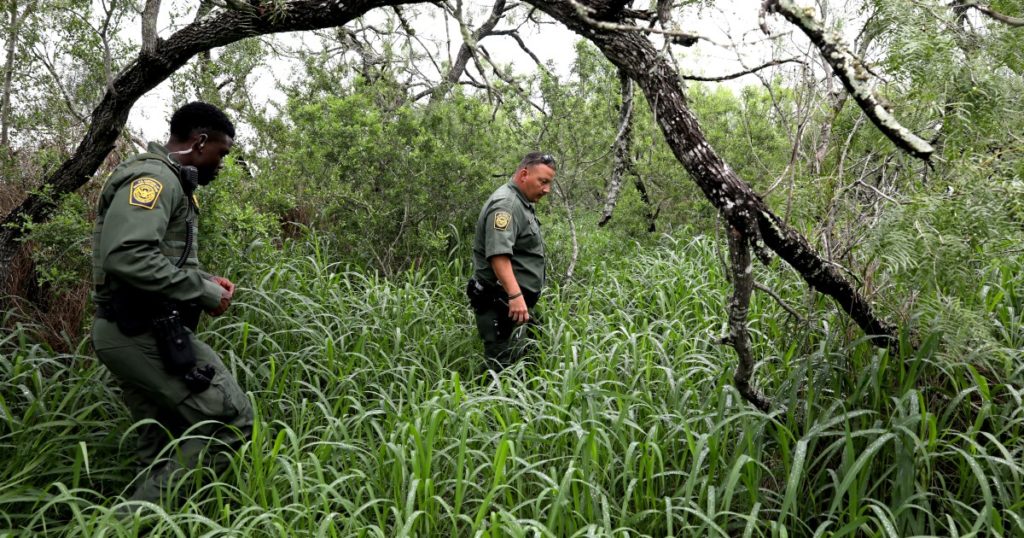 A U.S. Customs and Border Protection agent scrutinized video of a dying migrant on her cellphone, trying to match the background to the ranch she was searching for his body last month.

“Can I see the picture real quick, the background?” another agent asked.

Agent Nancy Balogh held out her phone. In the two minutes of video, 25-year-old Yoel Nieto Valladares lay on the sandy ground, shirtless and sweating, jeans cinched with a rectangular metal belt buckle. Nieto was barely able to sip from a Coke as another man fanned him with a black cap. The dying man’s hands twitched, a tattoo of his father and younger brother’s initials visible on his arm. His eyes rolled.

“How do you feel, guy? Hey, how do you feel?” the man filming asked, panning to show a dozen others dressed all in black, the color favored by smugglers working at night.

“This is bad, he’s delirious,” said the man filming.

Moments later, in a second minute-long video, Nieto’s black polo shirt was on and his arms lay atop it, limp. His eyes were open, staring.

A smuggler had sent the videos to Nieto’s family with GPS coordinates. “I really hope we find him,” Balogh said.

Several years ago, the U.S. Border Patrol launched a Missing Migrant Program in Arizona — though the agency’s primary mission remained apprehending migrants — that has since expanded border-wide. Their relationship with migrant advocates had grown strained. In recent years, the Border Patrol had even helped prosecute some who left water and other supplies for migrants in the desert.

But the agency’s approach has now evolved amid an increase in migration and deaths.

Brooks County — about 75 miles north of the Rio Grande Valley — has become the Border Patrol’s laboratory, a place to test approaches they’re already extending across the border. A three-person missing-migrant team trained in forensics is working with an intelligence officer to help identify migrant remains.

The agency also added equipment and technology to help locate stranded migrants faster. It installed more than 1,400 rescue signs across the region labeled with GPS coordinates. Agents obtained GPS coordinates for more than 22,000 landmarks that can be referenced during a migrant’s 911 call — from power poles to windmills, pipelines and cattle guards. And they positioned 30 mobile, solar-powered rescue beacons in remote areas with little to no cellphone reception. The beacons are equipped with cameras that have already led to the rescue of a migrant.

By summer’s end, the beacons will alert agents’ cellphones directly. By year’s end, they plan to have 170 beacons nationwide, which can be used to rescue migrants and investigate, Supervisory Agent Brandon Copp said.

Despite the summer heat, which usually decreases migration, the number of migrants arriving at the border last month — 188,829 — was the largest in years. The busiest area for crossings was south Texas, where agents earlier this month stopped 736 migrants in three groups near the Rio Grande. As of last month, they had helped recover more than 324 migrant remains and conducted 9,201 rescues nationwide, 81% more than all of last year.

“If we get facial recognition of a guide, we can tie them to that migrant’s death,” Copp said.

Like many of Texas’s 254 counties, Brooks — population 7,100 — doesn’t have a medical examiner. Death investigations are handled by justices of the peace unless the county pays an outside expert. Local funeral homes historically cut corners burying migrant dead. Researchers investigating unmarked migrant graves at a local cemetery in recent years found multiple migrant bodies buried together, some in plastic bags and milk crates. They had to exhume and catalog DNA in international databases to help identify them.

Now the sheriff’s office is working with the Border Patrol to more quickly identify and release migrant remains without sending them for autopsies or DNA testing, which can be expensive and time-consuming. The sheriff just got a secondhand refrigerated trailer on loan from the state funeral home association, used for COVID dead during the pandemic. Deputies and Border Patrol agents now store unidentified bodies there as they investigate.

Because of changes in county ordinances, some of the Border Patrol agents in south Texas, El Paso and Tucson have trained to photograph dead migrants’ fingerprints to help consulates identify them. They also learned to recover fingerprints from bodies that have decayed or been submerged in water.

“Never thought I’d be doing this, the forensic side of it, the compassion,” said Agent Jerry Passement while searching for Nieto’s body. “It’s a puzzle we’ve got to try to put together.”

The process of locating missing migrants often begins when those in distress call 911 from their cellphones, stranded and desperate for water. Dispatchers request their GPS coordinates, then connect them to the Border Patrol’s operations center, where agents also try to locate them.

The search can be daunting. A Guatemalan man who called last month said he had wandered for two days, far from any road, sign or light. Agents couldn’t locate him.

“I am lost and my companion died overnight. I’m alone here,” another 28-year-old Honduran migrant told dispatchers on May 18. “I’m bad. I can’t walk.”

Later that day, agents rescued him and recovered his friend’s body.

Copp and his team see migrants and their families as a resource. In at least one case this summer, a family helped agents bust a smuggler and rescue 42 migrants from a stash house.

“The humanitarian aspect, we’re putting more of an effort into it,” Balogh said as she searched for Nieto. “Nobody deserves to die like this.”

They’re working with Eddie Canales, founder of the Brooks County-based South Texas Human Rights Center, which has relayed information to authorities and helped save at least 50 migrants in recent months, Canales said.

“We’re seeing a phenomenal increase in the calls that we’re getting regarding people going missing,” he said.

Earlier this month, Canales checked a dozen of the group’s more than 150 water barrels, built on nearby ranches for migrants. In the last month, migrants had taken seven jugs of water, 28 gallons total. One half-empty barrel was surrounded by discarded clothes. Another contained five wilted dollar bills, probably left by a grateful migrant. Sometimes, supporters leave extra food and water. But last month, some barrels were stolen, along with $200 in supplies. The thieves were never caught.

Smugglers had offered Nieto’s family a choice: Pay more — about $11,000 each — or risk a long, dangerous journey to ensure that he and cousin Heyder Perdomo Nieto, 31, reached South Carolina.

“We decided to pay more so that they could come safely,” said Jhoselyn Nieto, 34.

She and a cousin in Honduras said the men had grown up in the capital, Tegucigalpa, and were ill-equipped to survive in the brush. Nieto, her cousin, known as “Gato” because of his green eyes, was a college-educated call center operator who dreamed of working at a bank. Perdomo, her brother, made furniture and cared for his 8-year-old daughter. Smugglers promised that the men would travel mostly by car, walking only about eight hours in Texas to circumvent a Border Patrol checkpoint.

Her cousin would die during a four-day trek with 18 other Central American migrants through arid ranches with little food or water. Perdomo would stay with his cousin’s body, abandoned by their guide, lost. He waited six hours, until his father got on the phone and told him to leave, “because you are still living.”

Perdomo set off into the ranches about 7 that night.

His sister called the smuggler and accused him of lying to the family and killing her cousin.

The family debated whether to contact authorities, afraid of how the smuggler might react if he still had the men. The next day, when she messaged her brother, the guide responded that they were headed to Houston.

But they never arrived.

When she messaged the following day, the guide stopped responding.

Four days later, after she wrote demanding the truth, someone claiming to be a fellow migrant said one of the men had died and the other was presumed dead.

“Sadly, this is a consequence for those who come here,” the stranger wrote.

“There are consequences, but you played your part,” she responded. “Tell me the location and send me a video if he is dead.”

He sent her the GPS coordinates and videos.

She watched in horror, realizing the smuggler had lied, and her brother was missing.

“We didn’t know if he was living or dead,” she said.

That’s when, on June 2, she sent the videos to the Border Patrol.

The next day, agents spent a half-hour combing the brush before they saw vultures circling.

“They found him,” Balogh said, and crossed herself as she always does when they locate a migrant’s body.

At first, agents couldn’t be sure it was Nieto. Scavengers had dragged what was left of the body under a log, wearing jeans and a blackened shirt. Had Nieto been missing long enough to be so decomposed, agents wondered? A researcher accompanying them said vultures could pick a body clean within hours.

“We may have to do DNA,” Copp said, which could take months.

Agents checked the body for identification, but found none. Then they saw a black polo shirt in the grass, a Coke bottle and a belt that matched the videos.

“That’s for sure the belt buckle,” Copp said.

They had found Nieto. Agents notified a justice of the peace, who pronounced him dead.

“The sad thing is, the family held onto that video for almost a week,” Copp said.

There was no sign of Perdomo, or whether he could have been saved, had officials been alerted sooner.

That day, after the Border Patrol called to notify the family that it had found Nieto’s body, they got their first call from Perdomo.

He was with a smuggler in Houston.

After he left his cousin’s body, Perdomo had nearly died, walking overnight and part of the next day. He stumbled upon another group of migrants whose guide took pity on him, gave him water, tuna and chocolate. Perdomo was so dehydrated, he vomited. He asked if they could retrieve his cousin’s body.

Fellow migrants had to support Perdomo’s shoulders as they walked. Wounded, dirty and hungry, he finally arrived on June 15. He was still recovering last week.

“He cries for Yoel. He remembers him. He tells me things that happened on the road,” his sister said.

It wasn’t clear what caused Nieto’s death. His father decided to have him cremated, so that he could have a funeral in South Carolina. But the Honduran Consulate insisted that the body be DNA-tested, which staff told the family could take up to eight months, Jhoselyn Nieto said.

“We want to recover his body as soon as possible so my uncle can have peace,” she said. “He can’t have him alive; at least he can have his ashes.”