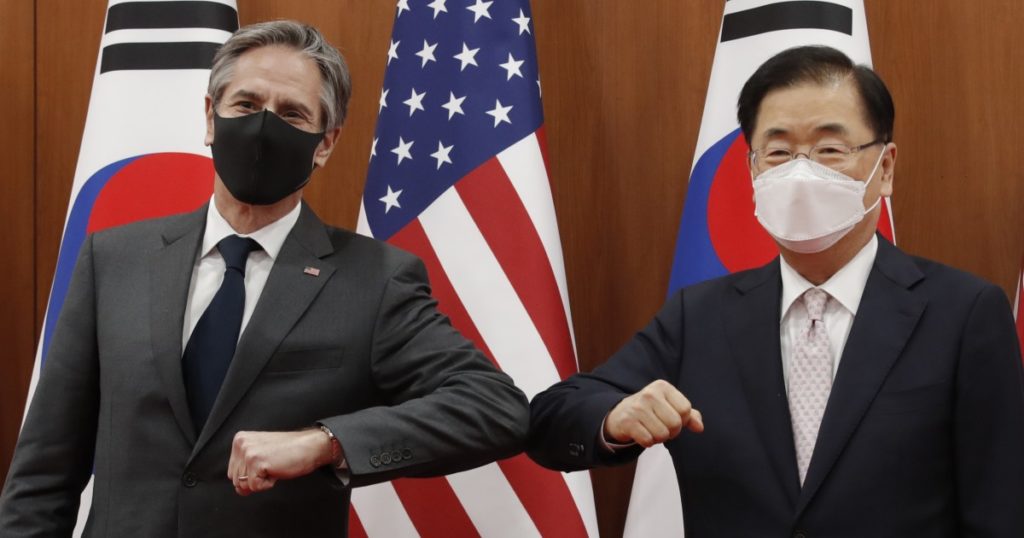 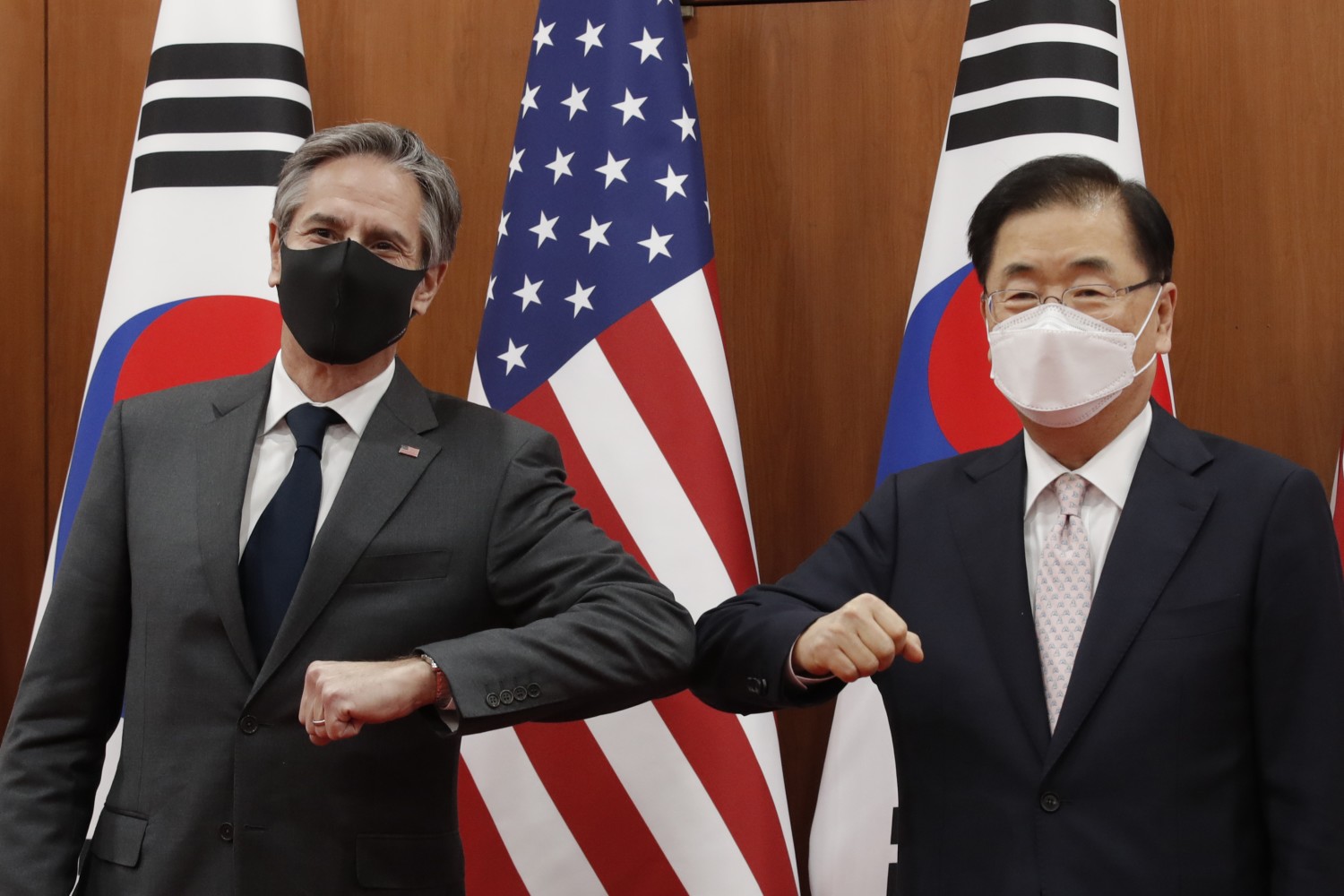 The Biden administration has turned its foreign-policy focus on Asia, holding its first overseas high-level talks with South Korea and China while struggling to confront nuclear-armed North Korea.

On Wednesday, Secretary of State Antony J. Blinken came to Seoul, following a stop in Tokyo, eager to reassure South Korean allies of U.S. loyalty after rocky years when former President Trump threatened to pull U.S. troops out of the peninsula.

Blinken said South Korea was the “linchpin of peace, security and prosperity” in the region and vowed to keep the country and neighboring allies safe. Accompanied by Defense Secretary Lloyd J. Austin III, this was America’s top diplomat’s first travel abroad, stalled until now by COVID-19 restrictions.

Quickly, however, it became clear how fraught the U.S. relationship with Asia has become and why President Biden’s attention is urgent.

South Korea’s Foreign Ministry made no mention of China’s or North Korea’s human rights records in its statement on the meeting, saying only that Blinken and Chung discussed a “shared understanding that devising and implementing a fully coordinated strategy toward policy on North Korea are vital.”

“The U.S. is putting strong pressures to persuade South Korea to figure out its true intentions in trying to form a united front to face China,” he said. “South Korea might lose sight of its larger interests if it is preoccupied with relations with the North.”

Another test rests with North Korea. Until this week, Biden administration officials said repeated attempts to reach out to Pyongyang through various channels, including the United Nations, failed to elicit a response. This contrasted sharply with Trump’s exchanges with North Korea’s leader Kim Jong Un, with whom he claimed to have fallen “in love.” Despite three showy summits, Trump never managed to persuade Kim to dismantle his nuclear arsenal.

Then came the first North Korean message to the new Biden administration. On the eve of Blinken’s arrival in Seoul, Kim Yo Jong, the influential sister of Kim Jong Un, issued an ominous statement in state media saying that annual military exercises held by the U.S. and South Korea — already significantly scaled back — represented “a serious challenge.”

In a statement largely aimed at South Korea, calling its leaders “dumb and deaf” and “bereft of judgment,” Kim Yo Jong also had forbidding words for the Biden administration.

“We take this opportunity to warn the new U.S. administration … [that] if it wants to sleep in peace for [the] coming four years, it had better refrain from causing a stink at its first step,” she wrote.

Blinken on Friday continues his diplomatic mission with the administration’s first face-to-face talks with senior Chinese officials. He will converge with Chinese Foreign Minister Wang Yi in Anchorage, along with Biden national security advisor Jake Sullivan.

Yet even the run-up to the Anchorage meeting reflected the dire condition of the U.S.-China relationship. Blinken on Wednesday announced a new batch of sanctions for 24 Chinese officials related to Beijing’s restrictions on free elections in Hong Kong. Their actions, Blinken said, have “reduced Hong Kong’s high degree of autonomy” and denied “Hong Kongers a voice in their own governance.”

The sanctions mean that those named, including several senior officials in the ruling Chinese Communist Party, are barred from many international financial transactions and travel to the U.S. Such sanctions, imposed widely on Iranians, Saudis, Venezuelans and others, rarely have altered the behavior that Washington considers offensive.

The always-difficult U.S.-China relationship deteriorated during the Trump years over tariffs and trade wars, and, in the final year of the former administration, Trump’s harsh and sometimes racist blaming of Beijing for the COVID-19 pandemic.

Although it is unlikely any progress will be made at this level and in an initial meeting, analysts said it was important for the Biden administration to make the gesture. Blinken has said he wants a multi-pronged approach to China, one where he can accuse Beijing of genocide in its brutal treatment of Muslim minorities in that country but also work with China on issues such as climate change.

Choosing Asia as its first diplomatic foray “is a smart play for Biden because there was a clear recognition in the administration that they have lost — we, the United States, had lost — ground in Asia,” said Michael Green, an Asia expert at the Center for Strategic and International Studies, a nonpartisan think tank in Washington.

Blinken “agrees with the Trump administration assessment that China is a strategic competitor [but] disagreed on the approach,” Green said. “And they needed to quickly build up a united front to deal with China on a range of issues.”

Administration officials said the Anchorage meeting will be an opportunity to make clear how differently the Biden team intends to deal with Beijing — although the concrete fulfillment of that notion remains yet to be determined.

“We think it’s really important that our Chinese interlocutors hear from [Blinken and Sullivan] directly about our priorities and about our intentions,” said a senior administration official, briefing reporters on condition of anonymity. “We know that sometimes there is a sense, potentially a perception, or maybe it’s a hope, in Beijing that our public message is somehow different than our private message. And we think it’s really important that we dispel that idea very early.”

In his stopover in Japan at the beginning of this trip, Blinken announced a fortified defense against Chinese “aggression,” including Beijing’s military expansion in the South China Sea and threats against Taiwan, but he did not offer details.

“I think both the United States and Japan share a deep concern about what we’ve seen in recent years, which is China acting more repressively at home and more aggressively abroad,” Blinken told a Japanese television station.

“Based on my conversations here in Tokyo, that’s clearly a real concern to both of us,” he said. “And it’s important that we work in solidarity to deal with some of the challenges posed by China, and I am confident we’ll do that.”

Wilkinson reported from Washington and Kim from Seoul.