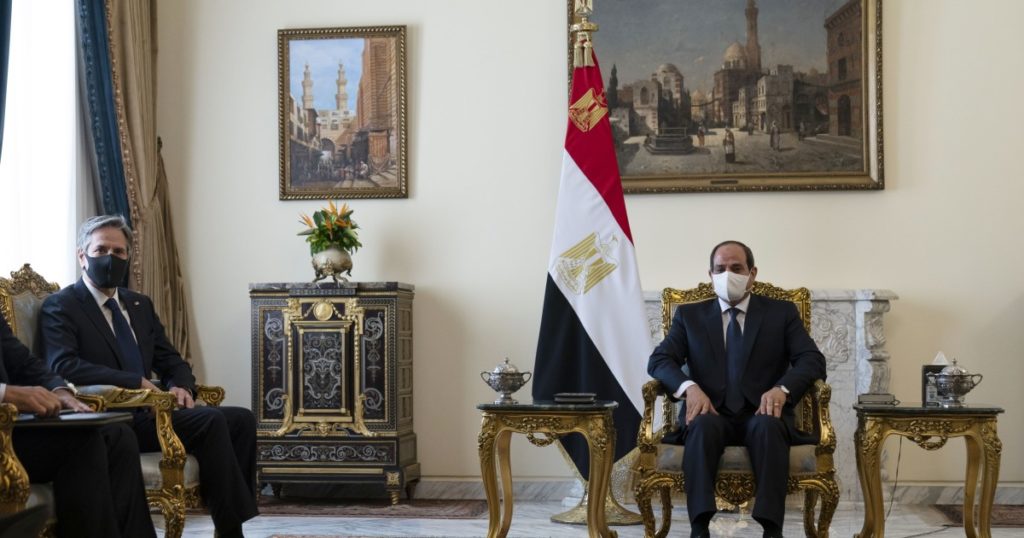 Secretary of State Antony J. Blinken’s first peace mission to the Middle East highlighted the complex and fraught relationships the Biden administration must rebuild to avert wider warfare in the region.

Blinken wrapped up the 48-hour swing through Israel, the Palestinian territories, Egypt and Jordan late Wednesday after holding sustained meetings with four very different leaders who had contradictory ties with former President Trump.

On Wednesday in Cairo, Blinken met behind closed palatial doors at the sun-drenched, palm-lined presidential compound of Egyptian President Abdel Fattah Sisi, whom Trump embraced as his “favorite dictator.” Hours later he sat in Amman with Jordan’s King Abdullah II, widely considered one of the region’s top moderates, but who had difficulty getting a meeting with Trump.

Blinken is confronted with the task of returning all of those relationships to a more traditional, evenhanded footing. Sisi and Netanyahu, the two who enjoyed Trump’s favor, are particularly complicated challenges. Sisi, a former general who seized power in a 2013 coup, has an abysmal human rights record, which includes the imprisonment and torture of critics. Netanyahu is on trial for corruption and heads a state that is widely seen as a repressor of Palestinian rights.

“Our meetings today in Cairo and Amman, indeed this whole trip, reflect a fundamental reality,” Blinken said in a news conference in Jordan on Wednesday night. “If we want to avoid a return to the harrowing violence of recent weeks, the countries of this region need to help and support one another.”

Blinken’s Mideast mission was hastily arranged after the U.S. helped push a cease-fire between Israel and the militant group Hamas following an 11-day war that devastated the Gaza Strip.

Blinken described intense and fruitful discussions with the leaders he met but had few initiatives to announce.

“Securing the cease-fire was important, particularly because of the devastating toll violence took on families on both sides,” Blinken said. “But we see the cease-fire not as an end, but as a beginning, something to build on.”

The U.S. has pledged millions of dollars in additional aid and will reopen a consulate in Jerusalem to handle Palestinian affairs, thus beginning an upgrade in U.S.-Palestinian ties all but destroyed under Trump. Egypt has pledged $500 million in reconstruction aid for the Gaza Strip. Even Israel has eased restrictions on fishing by Gazans along their coast.

But Blinken and the other leaders want to be careful not to let aid and future development projects benefit Hamas, viewed by Washington as a terrorist organization.

Asked how more concrete improvements could be put in place, Blinken said there had to be a “process” that evaluated needs and where the money can most effectively be spent, involving the U.S. the United Nations, Egypt, Israel, the Palestinian Authority — and not Hamas. Without saying, he was describing a bureaucracy that could easily get bogged down in political infighting or other problems.

“We’re working to put together the right process, the right mechanism to do that,” Blinken said. “And it really does start with assessing exactly what’s needed and then how to address the need. And again, just to make the clear distinction, we have — and this is already moving — urgent humanitarian requirements, as I’ve said, particularly water, electricity, sanitation. That’s already moving forward with different things moving into Gaza as we speak.”

Blinken said he would turn to Gulf states in the coming days to seek more support. Qatar, which is friendly with Hamas, announced Wednesday it would provide $500 million for Gaza’s reconstruction, Al Jazeera reported.

“We will continue to support our brothers in Palestine to reach a just and lasting solution by establishing their independent state,” Sheikh Mohammed bin Abdulrahman Thani said in a tweet on Wednesday.

Al Jazeera also reported on a Wednesday news conference in Gaza by Hamas leader Yehiyeh Sinwar and quoted him as saying he welcomed international aid and oversight, as long as it did not come from Israel.

But he complained bitterly of Blinken’s efforts to boost Abbas’ Palestinian Authority and sideline Hamas. “They are trying to add more fuel to the fire of Palestinian division,” Sinwar said.