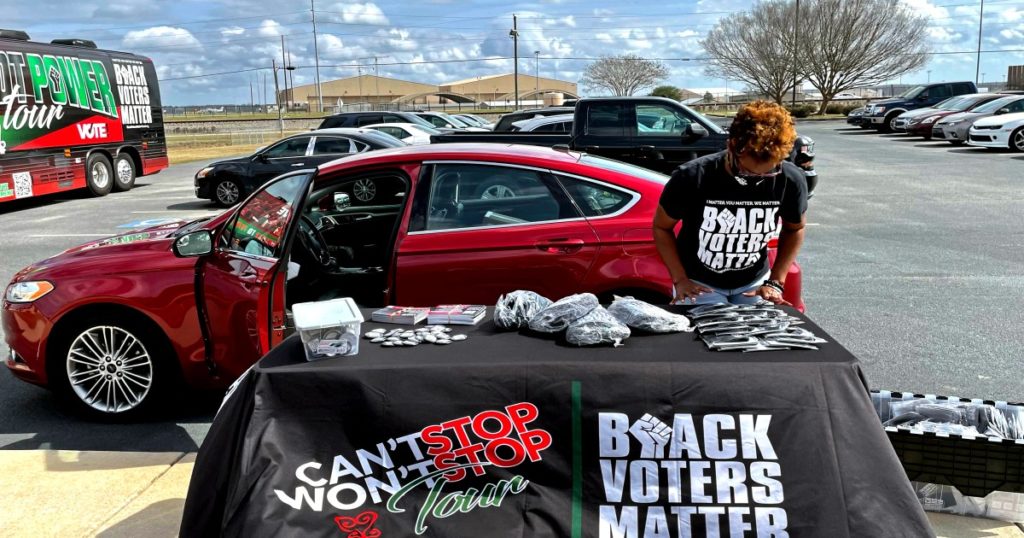 On an unseasonably muggy February afternoon, a tour bus emblazoned with “We got power” snaked through Warner Robins. Wrapped in the pan-African colors of red, black and green, it was an exuberant ode to Black political clout.

Residents, almost all of them Black, greeted the Black Voters Matter coach like an old friend as it blared its horn, leading a caravan past low-slung bungalows and red brick ranch houses. Men, women and children broke from their Sunday socializing to wave, run alongside it and raise clenched fists of Black power.

The bus had been through these leafy streets before, in the frenetic run-up to the 2020 presidential and Senate races in Georgia. Its presence here made national, even international news.

Weeks later it was back, not on a victory lap for Democratic wins in those national races but to gin up interest in a far sleepier campaign: a special election for a City Council seat in this small town 100 miles south of Atlanta.

The contest may seem low-stakes. But for the organizers who flipped Georgia blue, that is exactly the point.

“We’ve got to start here at the local level,” said Gloria “Miss Gigi” Johnson, who drove one of the cars trailing the bus. “You wonder, who gets to be the president, who’s in the Senate, who’s in the House? Start right here and you’re gonna know who’s gonna get there.”

Perhaps the surest sign of success is the backlash from Republicans, who have scrambled across the nation this year to pass bills that would suppress Black voter turnout.

Now, Black Voters Matter is striving to build on its accomplishment by going small. In 2021, the group is intent on turning out voters for municipal races here; in Bay County, Fla; in Rock Hill, S.C.; in Dothan, Ala. Rallying voters around little-noticed local races or community issues may not seem like the natural next step after this high-profile campaign cycle, but it is, in organizers’ minds, the surest way to build lasting political power.

Even if it’s not particularly glamorous.

“It’s like a wedding,” said the Rev. Lonnie Slater, a member of an alliance of Black pastors in and around Warner Robins working to raise awareness of local politics. “We’ve done a good job getting the person to the altar … now the big part is how do we stay married? … How do we keep that passion going?”

Within 24 whiplash-inducing hours in January, Fenika Miller was reveling in the stunning Georgia Senate victories for Democrats, then watching in horror as the U.S. Capitol was overrun with supporters of President Trump on a rampage to overturn the presidential election results.

“We didn’t really get a chance to sit in that victory,” said Miller, 46, the senior statewide coordinator for Black Voters Matter.

There’s always been such an “ebb and flow,” said Brown — the duality of feeling elated by new political gains and threatened that they could be taken away.

In Warner Robins, residents warily monitored the measures as they worked their way through the statehouse.

“What do you know about how they’re trying to change voting rights?” Philip Rhodes asked Miller as they handed out bags of fliers and free masks to members of the Fellowship Baptist Church.

Miller laughed brusquely and shook her head: “It’s a lot.”

Rhodes, a 64-year-old retired public affairs specialist, said he was most perturbed by a provision making it a crime to hand out water and food to voters, a service he and his fraternity brothers provided last year to those stuck in long polling lines.

“It just seems so petty,” he said.

Despite those attacks — or perhaps because of them — Rhodes and other Warner Robins residents reported feeling galvanized. The barrage of bills “lets me know that someone is very fearful of what is happening,” said Harvey B. Bee, bishop of the Winning Church. “It’s a very good time to be a Black voter because we see what’s happening on the opposite side.”

The City Council race in Warner Robins offered a test on the staying power of the recent voter mobilization. Multiple candidates were running to replace a councilman who resigned in the middle of his term, but the race essentially boiled down to two men: David Reid, a business manager, and Derek Mack, an aircraft logistics specialist.

The campaign centered on concerns that drive local politics: blight, utility rate hikes, a desire for more government transparency. There was also an undercurrent of racial tensions, about how city staffers of color were treated and the underdevelopment of the city’s Black neighborhoods.

“Black people have to get up and be just as demanding as our white citizens if we’re going to have true democracy in this city,” Mack, who is African American, said before the election. (Reid did not respond to a request for comment.)

Local Black Voters Matter activists were prepping well before early voting, which started just six weeks after the Senate runoffs. Though the group is nonpartisan and doesn’t promote candidates, its goal of turning out Black voters was widely seen as beneficial to Mack. Their tactics — caravans, setting up booths at churches, sending out text message blasts and robocalls — were all designed to make residents aware of the contest and boost the likelihood they’ll vote.

Mack praised the group’s high-visibility approach, including its bus, which he said “instills the pride of the 1960s, of the civil rights movement.”

There are times, though, that the bus is greeted with extended middle fingers — a reminder that not everyone in town is pleased to see it.

“Black Voters Matter has a direct connection with changing the culture in this city,” Mack said. “And there are people that are really nervous about it.”

Warner Robins is in the midst of transformation. This onetime quiet hamlet anchored by Robins Air Force Base and ringed with cotton fields and peach trees has become one of the state’s fastest-growing cities. The latest census figures show it was home to more than 75,000 people, 40% of them Black.

Its main thoroughfare is an explosion of big-box retailers and mid-priced chain restaurants, but on the largely Black north side, the options narrow to discount stores and corner marts.

For years, Houston County, where Warner Robins is located, had consistently tilted Republican, but Miller urged Black Voters Matter leaders not to overlook her hometown.

“I made the pitch that we should cede no ground,” said Miller, who began working with the group in 2018.

That philosophy echoes that of Abrams, who put together a 10-year plan to turn Georgia blue that relied heavily on overlooked rural voters of color. Her unsuccessful 2018 gubernatorial race set record levels for Black turnout and provided the template for Democratic wins two years later.

The work of Black Voters Matter hinges on engaging people whether an election is going on or not. Tired of politicians or political parties showing up only during campaign season, Brown and Cliff Sims founded the group in 2016 to partner with activists already established in local communities — people like Miller, who has been turning out votes in Warner Robins since she was a preteen.

As Brown, Sims and Abrams gained renown, their celebrity has brought their groups greater resources. Miller had a mountain of Black Voters Matter-branded T-shirts, bracelets, masks and cardboard fans to give to Warner Robins residents. The influx of dollars also allowed the organization to expand its reach; in Georgia alone, it now has a presence in 75 counties.

Whether big Democratic funders are committed to this kind of local work in the long term remains to be seen. Steve Phillips, a San Francisco-based donor and activist who was one of the earliest funders of Abrams’ work in Georgia, was skeptical.

“People don’t understand it,” he said. “It’s not sexy enough for a lot of the outside donors.”

Even for those doing the work, it can be a total slog.

The day after the bus paraded through Warner Robins neighborhoods, it was leading another caravan, this time in coordination with Black churches for a turnout push for the council race. Voters trickled in sporadically to the only early polling site — a health clinic on the town’s main commercial drag. “Miss Gigi” Johnson, a 62-year-old community activist, did her best to coax drivers to come vote, bellowing from the curb, “Take that right to make it right!” Few followed her instructions.

When the polls closed at 5 p.m., Miller bluntly assessed the day’s effort.

“That was six weeks of preparation for about 30 votes,” she said.

By the time election day came around March 16, the turnout was, as expected, piddling — less than 7% of registered voters.

What was unexpected was the result: Mack, the Black candidate, won in a blowout, doubling the vote total of Reid, his nearest opponent.

“Our people were showing up in an off year and in a special election,” Miller said. “What we did was pretty amazing.”

Not that she had time to savor the win. There is community organizing to be done in Savannah around local development proposals. In Columbus, partners on the ground want to talk about public safety. The Black Voters Matter bus continues to tour through the state.

“There’s so much going on,” Miller said. “You just hop right to the next.”