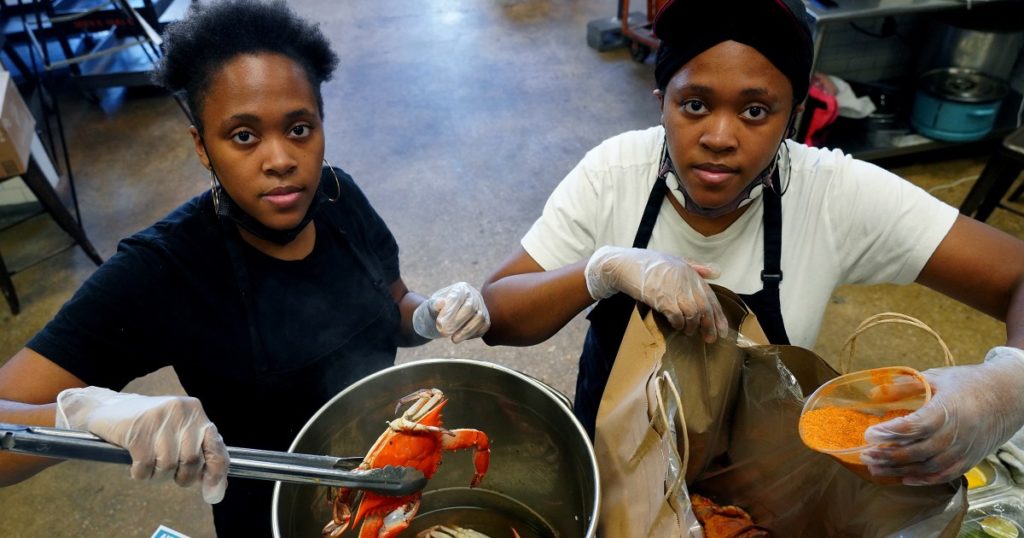 As a child growing up in the rugged Rust Belt city of Rockford, Ill., Michelle Youngblood loved to make sketches of dresses and outfits. After high school she went to design school in Chicago.

But the immediate demands of making a living and caring for twins as a single mom pushed her dreams aside. She settled for a steady paycheck working for a health insurer. At least that promised a measure of security — until last summer when, in a Zoom call, she and a dozen co-workers were abruptly laid off.

Youngblood, who is Black, was shocked, but also ready. In her spare time, she had never stopped designing and making plans to sell stylish children’s wear online.

Using $10,000 in severance pay, she arranged for a company in India to turn her sketches into ball dresses, twirl skirts and other garments. In October, her company — Brooklynn & Blake, named after her two kids — was born.

“It was the best thing that happened to me,” Youngblood, 44, said of the layoff, “just pushing me, catapulting me into doing something that I love to do versus staying with a job, working and having a comfort level that says, ‘Oh, I’ll be fine, day in and day out because I work and get a deposit every two weeks.’”

“For me, it was definitely a blessing in disguise for sure,” she said.

If ever there were a hint of a silver lining in the pandemic, it may be the thousands of Black entrepreneurs turning adversity into opportunity by starting businesses of their own.

Last year there were more new Black-owned businesses proportionate to the total population than at any time in the last quarter-century, according to the Kauffman Foundation’s annual study. Black entrepreneurism ranked higher than for white-owned and Asian-owned companies, the group found.

On average 380 out of every 100,000 Black adults became new entrepreneurs during the 2020 pandemic, up from 240 in each of the prior two years, according to the study, based on census data.

To be sure, the startup surge was not entirely positive. It was partly a reflection of the heavier toll the COVID-19 crisis took on Black Americans, in deaths as well as job and income losses.

Some 40% of Black-owned firms closed in the immediate aftermath of the outbreak versus 20% of all active U.S. business, according to research by Robert Fairlie, an economics professor at UC Santa Cruz.

And the startup numbers almost certainly included businesses that were simply reopening after closing during the early days of the pandemic, according to Fairlie, who coauthored the Kauffman report.

Finally, many of the Black-owned businesses that formed last year were what are called “necessity” startups — that is, firms that people started to survive a layoff, or a cut in hours or income.

And such necessity enterprises tend to have higher failure rates than “opportunity” startups, which are more common during good economic times.

Still, for many Black workers and would-be entrepreneurs, the economic crisis spurred by COVID-19 provided an opportunity to try for something better.

“They had a moment of pause induced by the pandemic,” said Everett Sands, chief executive of Brea-based Lendistry, whose bank saw a surge in inquiries from Black customers interested in starting businesses.

For some, he said, that meant “Let me try something else.” And so they opened up a daycare center or used their cars to get into delivery service, Sands said.

Sands’ bank is one of the largest Black-owned small-business lenders in the nation, and it’s been busier than ever, thanks in part to government-sponsored COVID-19 relief grant and loan programs.

Just how many of the new startups will survive and grow, creating jobs and building wealth, is an open question. Historically, the failure rate for Black-owned startups has been high. But Sands and others who work with Black-owned businesses see reasons to be more hopeful this time than in the past.

The overall economic recovery is strong. And many more Black entrepreneurs are taking advantage of the pandemic-accelerated boom in demand for goods online. They are also making use of social media and new technology platforms to grow their brands and customers.

On March 15 last year, RaeShawn and LaShone Middleton, 30-year-old identical twins, were laid off from their server jobs only hours apart at two restaurants in Washington, D.C.

Out of work and hungry for Maryland blue crabs one afternoon last summer, the sisters, who years earlier had graduated from culinary school, thought, “Why not cook and deliver crabs online?”

The Middletons prepared a bundle of seasoned crabs in their home in Laurel, Md., and went door to door in their neighborhood handing out promotional fliers. They sold two orders totaling two dozen crabs that August day.

Last month their company, R&L Crab, filled 648 orders for thousands of crabs, plus countless hush puppies, corn and other sides.

On a recent weekday afternoon, LaShone was out making deliveries while RaeShawn scrambled in a rented shared kitchen in northeast Washington, checking orders on her laptop, pouring light beer into 10-gallon pots of crab, and showing a new part-time hire how to tell when they are done.

“That is a perfect crab,” RaeShawn said as she took one out of the pot, folded an upper leg and felt the texture under it.

The sisters want to have their own kitchen and envision five locations covering the Washington region. They also plan to open a bar.

“At this point we just need capital. Capital is what’s important,” LaShone said.

In the wake of last year’s racial protests following the murder of George Floyd, major banks have pledged more money than ever to help Black-owned and other minority-owned businesses as part of their effort to address race and economic inequities.

JPMorgan Chase said it would make an additional 15,000 loans to small businesses in Black and Latino communities. Bank of America announced a $1-billion commitment.

Target, Apple and other nonfinancial corporations have said they too would pony up billions of dollars for Black communities, to increase spending with them, for education and to build their roster of minority vendors.

Nearly a year into some of these commitments, most have been quiet about how these efforts are progressing. And thus far the broader picture is not very encouraging. Of some $50 billion pledged by corporations for racial equity, Creative Investment Research said last month that only about $250 million has been spent.

“It’s a lot of talk and commitments, and there’s a fundamental challenge in getting that money out the door,” said Michael Roth, managing partner at Next Street, which helps raise capital for small businesses.

“Large corporates are not yet making whole, making true on their commitments,” he said. Roth led the Small Business Administration’s transition for the Biden administration.

“You do see a groundswell of activity,” he added, but what’s needed now is fundamental change in the way government and lenders make capital and other resources accessible to Black-owned businesses so they are sustainable.

Though Black Americans make up just over 13% of the nation’s population, they account for fewer than 2% of U.S. businesses and only 0.3% of total sales, according to 2018 data, the latest, from the Census Bureau.

“This is the not the first time there’s been a push toward Black business, usually after a nationwide recognition that there is an injustice,” said Mehrsa Baradaran, a UC Irvine law professor who has written extensively about banking and the racial wealth gap.

She sees hope in how the Biden administration has put social and racial equity at the forefront of its COVID-19 relief and other economic policies. The president has promised billions for funding and training to develop and grow Black and other minority entrepreneurs.

And some revamping is already happening at the Small Business Administration, which has moved to prioritize loans for minority businesses and underserved communities. The SBA has been working more with community lenders instead of its usual practice of dealing with large lenders, whom many Black people do not trust.

More things are happening bottom-up across the country, in some of the most unlikely places.

It launched in September, and the first class of 12 new and young businesses graduated in February. They included a candle maker, a martini bar, a food caterer and four clothing sellers.

For the second class, 36 business owners applied for 11 available slots.

“A lot of times the issue is people’s jobs are not paying enough,” Young said of why more Black people have been going out on their own.

Young is very optimistic about their sustainability. “Part of it is because there’s such great support that they have for one another,” she said.

They’re booking space at the martini bar for functions, for instance, and buying hair-care products for their salons, she said.

“The way that they cross-promote one another’s businesses is incredible.”