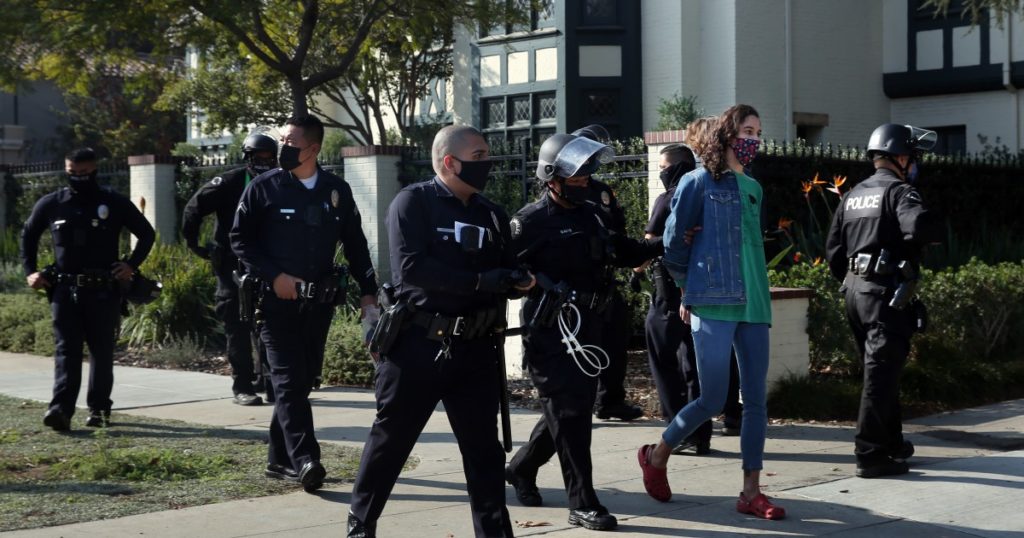 Monday’s demonstration marked the seventh day in a row that protesters have gathered outside Getty House, the official residence of L.A.’s mayor.

Protesters slammed Garcetti’s record on transportation, homelessness and policing and said he shouldn’t be in charge of those policies at a federal level.

“It’s been a rough seven years with Garcetti,” said Channing Martinez, director of organizing for the Bus Riders Union, a civil rights and climate justice group. “The fare increases, the bus service cuts. His policies have targeted Black people.”

Garcetti, who served as a co-chair of Biden’s election campaign, has been mentioned by various publications as a possible contender for a Cabinet post or other job in Biden’s administration. He hasn’t dismissed such talk but also has said “it’s more likely than not” that he’ll remain L.A.’s mayor.

Then-Mayor Antonio Villaraigosa was also the topic of speculation over whether he would be appointed secretary of Transportation under President Obama.

Bu unlike Garcetti, Villaraigosa ultimately issued a statement in 2013 announcing he would finish out his term, a move intended to end chatter about his possible departure.

Black Lives Matter-Los Angeles — which has long clashed with Garcetti over policing — and other groups have vowed to protest every day until either the mayor removes himself as a possible appointee or Biden says he won’t hire him.

Protesters first showed up on Nov. 24, banging on pots to harangue Garcetti. At one point that day, the crowd of about 35 blocked a vehicle from exiting the driveway of Getty House.

“It’s a damn shame. Someone who has failed in both the areas of transportation and houselessness and now they think of putting him on a national level to be in charge of any of it,” said Sheila Banks, a 34-year-old organizer with Black Lives Matter-Los Angeles, during the Nov. 24 protest.

“He’s got two years left on his term. Los Angeles can take one for the team,” said Melina Abdullah, co-founder of Black Lives Matter-Los Angeles. “Garcetti ain’t going to D.C.”

The size of the demonstrations has fluctuated over the week. Organizers said several hundred people attended protests over the weekend.

There have been two arrests for failure to disperse during the week of protests, said LAPD spokesman Josh Rubenstein.

It’s unclear if the mayor and his family have been home during the demonstrations.

Black Lives Matter member David Cunningham, 22, said he came out Monday to bring attention to the rising numbers of arrests of homeless people that have occurred under Garcetti.

He accused Garcetti, who served as City Council president before becoming mayor, of effectively ignoring the downtown neighborhood, where thousands of people live in squalid conditions.

Bus Riders Union organizer Martinez said that Garcetti met with his group in 2014. The mayor told the group he was moving toward the goal of free transit, Martinez said.

Instead, the mayor, who serves on the board of the Metropolitan Transportation Authority, backed a hike in monthly bus fares.

The group also opposed a contract between Metro and the Los Angeles Police Department for patrols. Garcetti backed the deal.

Some of those protesting outside Getty House are longtime critics of the mayor. Pete White, founder of the Los Angeles Community Action Network, blamed Garcetti for the increase in homelessness seen across the city.

“He can’t be allowed to fail forward,” White said.

Asked about specific criticisms, Garcetti spokesman Alex Comisar said that arrests of homeless Angelenos decreased in the first half of this year, as compared with the same period in 2019.

Comisar also said that Garcetti has initiated a feasibility study on eliminating fares on public transit and that the city has housed more homeless people than ever before.

“I will always support people’s right to make their voices heard peacefully and keep listening to what they have to say,” Garcetti told The Times on Monday.”I am honored to represent 4 million Angelenos, and I am singularly focused on saving lives and rebuilding a city out of this crisis that is more fair, just, and equitable.”

More than a dozen police officers formed a line in front of Getty House during Monday’s morning protest, which drew about 100 people.

After more than an hour of speeches, protesters marched to Wilshire Boulevard, where they blocked traffic, forcing several city buses to stop.

At one point, a distraught-looking man emerged from one of the buses and waved a piece of paper at the group, saying he had a scheduled surgery appointment. The group let the bus pass.

Since March, Getty House has been the site of protests from different groups focused on racial injustice, evictions and COVID-19 restrictions.

Neighbor Suz Landay, who lives in a Mediterranean Revival-style home, briefly watched Monday’s protest from her driveway. Her orange cat, Sven, has been a fixture at the protests.

After residing for 26 years across the street from Getty House, Landay said she’s used to the protests. Still, “they’ve never come every day,” Landay said.