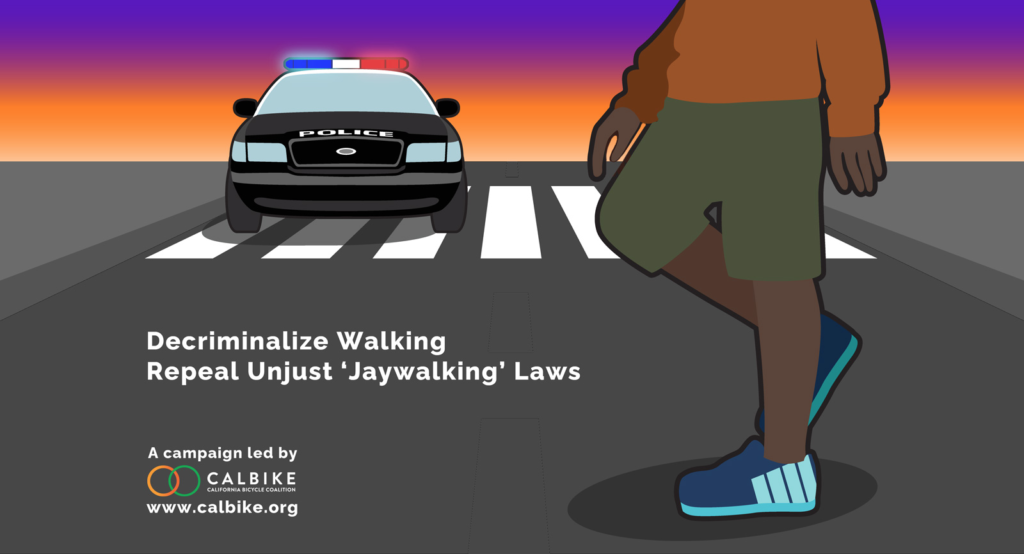 Earlier today, the California Assembly Transportation Committee voted 12-2 to support A.B. 1238, the “Freedom to Walk Act” to eliminate jaywalking laws and make it legal for pedestrians to make mid-block crossings and cross against traffic lights when it is safe. The legislation, introduced by Phil Ting (D-San Francisco, San Mateo) will head to the floor of the Assembly for final passage before heading to the Senate.

“We applaud the Assembly Transportation Committee for advancing this important bill,” said Jared Sanchez, CalBike Senior Policy Advocate. “Their strong support is a sign that California is ready to leave these regressive and oppressive laws in the dustbin of history, where they belong.”

In California and many other places, citations for crossing against the signal or in the mid-block are disproportionately issued to Black people. Policing “jaywalking” and other minor traffic infractions provides opportunities for biased and pretextual policing. Decriminalizing jaywalking will remove one unjust burden from low-income California residents, who can least afford to pay the fines and who are more likely to live in neighborhoods that lack infrastructure for safe crossings.

“The incredible rate at which pedestrians are dying from crashes should compel us to understand why fellow Californians navigate as such, not criminalize them. This is just the first of many steps in our fight to provide all those who walk and roll with a little more dignity. We look forward to the work ahead,” shared John Yi, Executive Director of Los Angeles Walks.

On its advocacy page, WalkSF makes an even more simple case for passage of A.B. 1238, “Those limited resources for traffic enforcement should focus on reckless and deadly driving behavior, not ticketing pedestrians.”

To date, more than 85 groups and individuals have signed on to a letter supporting A.B. 1238. Supporters include the Ella Baker Center, Courage California, Disability Rights California, and the Coalition for Humane Immigrant Rights.

The entire concept of “jaywalking” was created over a century ago to criminalize walking in the street in a time when pedestrians, bicyclists and transit vehicles shared the right of way before cars were introduced. When cars were introduced to cities, the results were catastrophic to road users not in automobiles. The public relations campaign waged by auto makers was documented in a humorous way in the TruTv series “Adam Ruins Everything.”