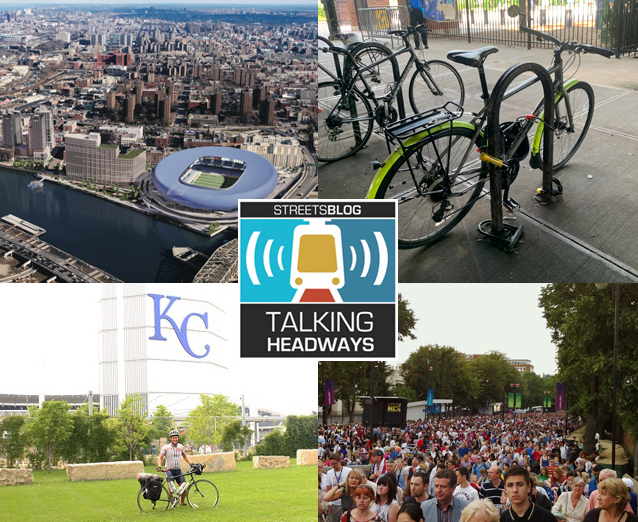 This week we’re joined by new Rail~Volution CEO Tamar Shapiro.  We chat about her previous work in transportation and city planning at organizations such as NUMO and The Governor’s Institute, how to measure transportation success, and the “transportation parades” before German soccer games.

Jeff Wood: So you lived in Germany for a number of years. We mentioned earlier, you’ve worked at the German Marshall Fund and we’ve chatted on the podcast about a number of great ideas, including Verkehrsverbund and high-speed rail. Eric Eidlin, who was the German Marshall Fund fellow for a little while, has been on the show a number of times talking about high-speed rail innovations. What’s something that you learned from German transportation policy or German transportation and land-use policy that you think is really fascinating and maybe you want to bring back and learn from?

Tamar Shapiro: There’s so much. The example that I will give is maybe more of a personal and lighthearted example, as opposed to an earth-shattering example, but I think it does get at how differently the coordination between transportation and other areas of civic and urban life happen in Germany. So when we were living over in Germany for those few years, between 2017 and 2019, we became pretty big fans of the local soccer team. We attended most of the home games, which took place in a stadium with really a tiny, tiny parking lot in front of it. There were also debates about what happened in the neighborhoods around it on game days.

So clearly people were driving to the stadium, but the parking lot was tiny. We would bike to the stadium, which was quite central, and arrive on our bikes and push our bikes across the parking lot, a tiny parking lot. There’d be throngs of people, either getting off the tram at the nearby stop to come to the game, plus others who were pushing their bikes. Every game felt like a local bike, pedestrian, public-transportation parade. That’s what it really felt like to me, as the stadium was right along the river. After the game, you know, the paths along the river were just full, absolutely full of people, biking home. I don’t think there’s many cities in the us where you would see that coming from a very large sporting event from the stadium.

Part of that was also that public transportation was included in the price of the ticket to the sporting event. Not only was that true for sporting events, that was also true for cultural events. If you went to an orchestra concert in the city, public transportation was included in that. These are small little examples of coordination, but it just shows the mindset that is thinking, how can we make it as easy as possible for people to access cultural events, sporting events, things they want for their, you know, not just for daily needs and jobs, which is of course a big part of the equation, but also for recreation also for their enjoyment. How can we make sure that it is as easy as possible for people to use public transportation to get to those destinations?

So that was one of my fond memories is coming from the soccer games and just seeing the nonstop parade of bikes going both ways out of the stadium.