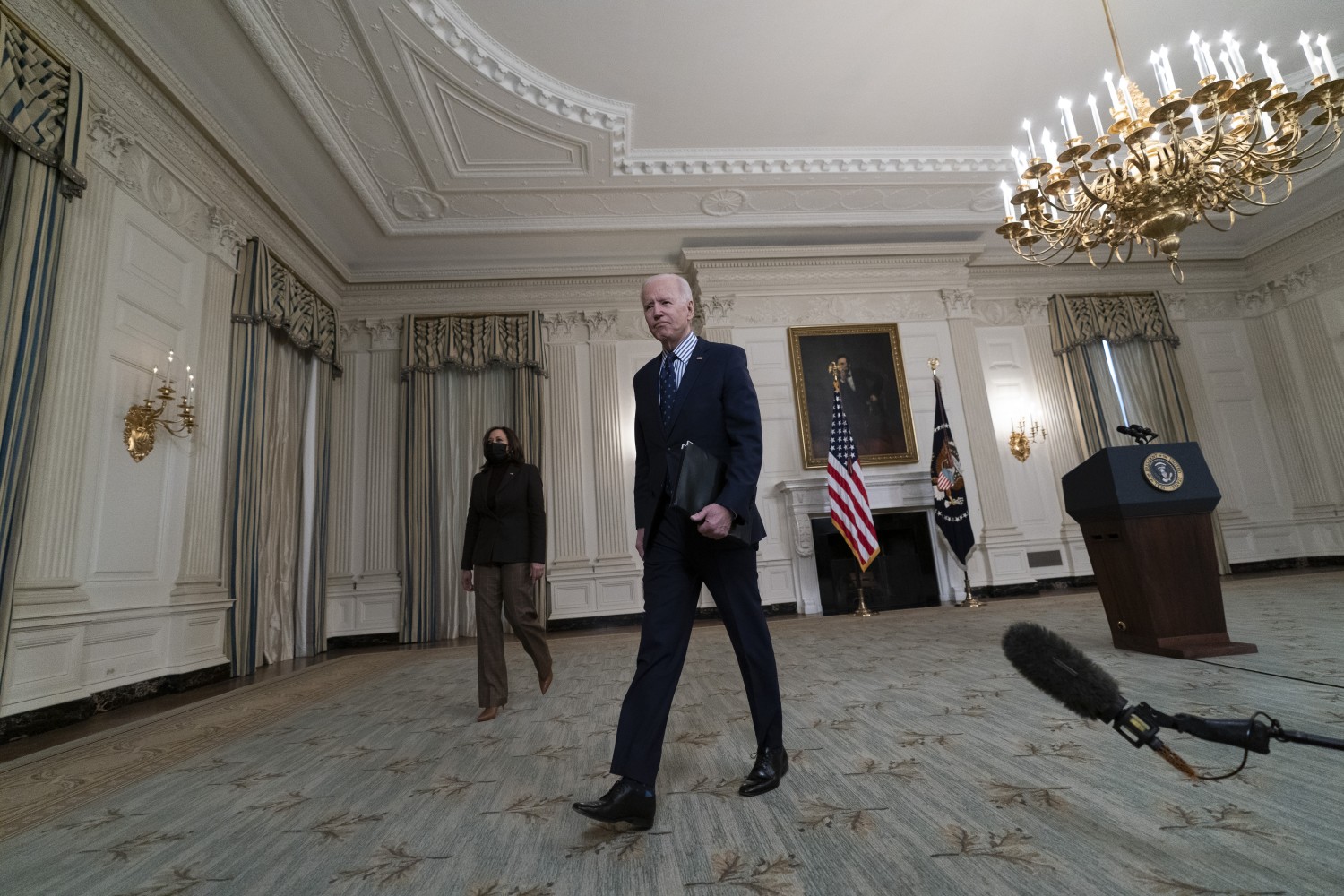 President Biden’s first big legislative victory, the $1.9-trillion package he calls the American Rescue Plan, squeaked through an evenly divided Senate by the narrowest of margins, along party lines, foreshadowing the challenges ahead for his other priorities — on infrastructure, voting rights, immigration and climate change.

But the accomplishment — and the potential economic and public health impacts of the wide-ranging relief program — could also mark a big step toward Biden fulfilling his Rooseveltian ambitions.

“This is going to be the biggest legislation affecting social and economic justice in decades, and it’s been achieved in the early days of an administration,” said Bob Shrum, a longtime Democratic operative.

Building on this early success won’t be easy, given Democrats’ razor-thin Senate and House majorities and the nation’s deep partisan divisions. Few of the president’s other policy initiatives are likely to be as broadly popular as combatting a painful, year-old pandemic. But his first 50 days have given Democrats reason to believe that the experienced, grandfatherly Biden is well-suited to capitalize on the opportunities opened up by the confluence of twin health and economic crises and a divided, distracted opposition party.

With Republicans failing to mount a blitz against him, Biden kept his focus on his pandemic response. He amped up vaccination efforts, mourned the more than 527,000 Americans who have died from COVID-19 and built public support for his relief bill, much of which — direct relief payments, extended unemployment benefits, a child tax credit — is targeted to the country’s neediest families.

The fact that not a single Republican voted for the package belied its broad popularity, which Biden said was critical in getting it passed. A poll released Tuesday by the nonpartisan Pew Research Center found 70% of Americans support the proposal, including 41% of Republicans. And Biden, set to deliver a primetime address Thursday marking one year since the country first locked down, continues to earn high marks for his response.

“He just seems like the right person at the right time, and this is a totally unprecedented time,” said Mack McLarty, President Clinton’s first chief of staff. “He’s very self aware, and after being vice president and serving in the Senate, he’s at a different place in his life and career. He’s very secure in himself, he’s experienced loss and that’s shaped him.

“He’s been decisive and bold, but in a very statesmanlike manner,” McLarty continued. “So far, it’s been effective.”

Republican strategist Mike DuHaime said Biden benefits from the low bar Trump set by his outlandish conduct as president. “It’s a very basic level of competency and a lack of controversy,” DuHaime said of Biden. “Just by being boring, he is clearing the bar.”

Cornell Belcher, a Democratic pollster who is Black, said that Biden also benefits from “being an old white guy.” He added: “It’s hard for Republicans to scare middle-of-the-road Republicans about Joe Biden. … But he’s also someone minorities have rallied around. And that makes for a combination we don’t see very often in our politics.”

Biden and Democrats have been guided by hindsight and an oft-avowed determination not to repeat perceived mistakes from President Obama’s first year — going too small on a recovery package, waiting too long for Republican support, failing to tout its benefits.

But the example of President Franklin Delano Roosevelt has also been influential for Biden and his team. Chief of Staff Ron Klain and other senior aides made a point of studying FDR’s Depression-era presidency during the transition period, and Biden hung his portrait in the the Oval Office.

But past experience is only so helpful.

“It’s good to learn from the past. It’s more important to recognize changed circumstances when you’re in the moment,” said Jennifer Palmieri, a communications director to President Obama. “The Biden team, as much as they’re relying on their experience, they’re seeing and appreciating that they’re in uncharted territory.”

Many senior aides, Palmieri noted, are on their third tour of duty at the White House after serving Presidents Clinton and Obama. “You learn to trust your instincts,” she said. “And you come to know that to some degree, you’re damned [politically] if you do and if you don’t. So it becomes: Position yourself to actually solve the problems.”

When Biden and his aides began sketching out a relief bill before the inauguration, they didn’t start with a price tag.

“We spent weeks assessing and analyzing what more the federal government could do to meet this challenge more effectively, more aggressively and more forcefully,” said Biden counselor Steve Ricchetti. “The total number and nature of the package reflected that analysis. The president had assessed that this was what was needed to address the crisis.”

Biden never budged from the $1.9-trillion bottom line, arguing that Obama’s 2009 stimulus package suggested the greater risk was spending too little. Emboldened by Democrats’ two Senate victories Jan. 5 in Georgia, where they won after campaigning for larger relief payments, Biden also refused to reduce the $1,400 provided for most Americans in the bill.

Once the Georgia elections suddenly put Democrats in control of the Senate, they could use a procedural option for budget bills, known as reconciliation, to pass the measure with just 50 votes — without Republican support.

Biden, who spent 36 years in the Senate, leveraged his relationships with lawmakers in both parties. He was unsuccessful in cajoling moderate Republicans, but helped negotiate a last-minute compromise on unemployment benefits to secure the decisive 50th vote from Democratic Sen. Joe Manchin of West Virginia.

The victory unified a Democratic caucus that had been divided over parts of the bill, in particular a minimum wage hike that was taken out. Manchin, who represents a state President Trump won by 40 percentage points, praised the bill in television interviews as “helping everybody,” while Vermont Sen. Bernie Sanders, a Democratic Socialist, celebrated it as “the most significant legislation for working people” in the modern era.

The independent Tax Policy Center said nearly 70% of the package’s tax breaks would go to households earning $91,000 a year or less; by comparison, Republicans’ big 2017 tax-cuts package delivered roughly half its reductions to the top 5% of income-earners. While some economists have warned that such a large stimulus could drive up inflation, Biden advisors contend it will reduce inequality and spark growth.

“If this accelerates the time in which we get out of the pandemic and accelerates the economy, those are two big things for him and the Democratic Party as they approach the midterms,” said former Obama advisor David Axelrod.

Some Republicans say Biden didn’t reach out to them enough, but Axelrod argued that Biden’s outreach enabled him to win broader public support, if not actual GOP votes. “He pursued this while keeping the temperature down, without personalizing the opposition or closing the door to cooperation on other issues,” Axelrod said.

Though the White House hasn’t confirmed that an infrastructure initiative will be its next big legislative push, domestic-policy advisor Susan Rice and Louisa Terrell, the president’s legislative affairs director, have been examining policy ideas for a package, according to people close to the process. Biden has spoken of a jobs bill coming after the relief package, following the arc of Roosevelt’s “Relief-Recovery-Reform” approach to the Great Depression.

The White House is likely to have more patience with bipartisan negotiations about infrastructure than it did for emergency COVID-19 relief. Also, Manchin has said he will oppose using reconciliation rules a second time. On most issues, Democrats need at least 10 Republicans’ support for the 60-vote margin necessary to overcome filibusters.

“We’re going to listen with self-critical ears for advice, recommendations and counsel we get from any and all quarters,” Ricchetti said.

Even with bipartisan support for infrastructure investments from both organized labor and the U.S. Chamber of Commerce, getting 60 senators to agree on the particulars — most of all, whether and how to pay for it — won’t be easy. Republicans oppose Biden’s proposal to offset new infrastructure spending by raising taxes on the rich and multinational corporations.

Biden’s window for bold action could be short. Republicans have good prospects of winning back control of the House and Senate late next year; the president’s party typically loses ground in midterm elections.

“Even under the best circumstances for Biden, you have to like the Republicans’ chances,” said Alex Conant, a Republican consultant. “Politics is all about, what have you done for me lately? A year and a half from now, voters are unlikely to remember a $1,400 check.”

Yet the unprecedented circumstances of the dual health and economic crises, as well as Republicans’ infighting as Trump moves to control the party from the sidelines, makes for an unpredictable political outlook. Some operatives in both parties agree Democrats don’t necessarily have to fear the midterm jinx.

DuHaime, the Republican strategist, said, “Biden and Democrats will be judged based on whether people feel like the country is recovering. If kids are all back in school, if people are back to work and back at football games in the fall of 2022, that’s going to be good for Biden.”

“We are in a new political universe where some of the old laws of gravity may not apply,” said Democrat Palmieri. “You may not see the country coalesce [around infrastructure] like it did with the COVID-19 package. Other things may be more complicated. But, in the history of the country, every now and then presidents hit a moment where it is possible to get a lot done and have the public be grateful for it.

“I wouldn’t say it’s probable,” she continued. “But it’s probably more possible than it’s been for any president since Reagan. These moments do come and this could be that moment.”