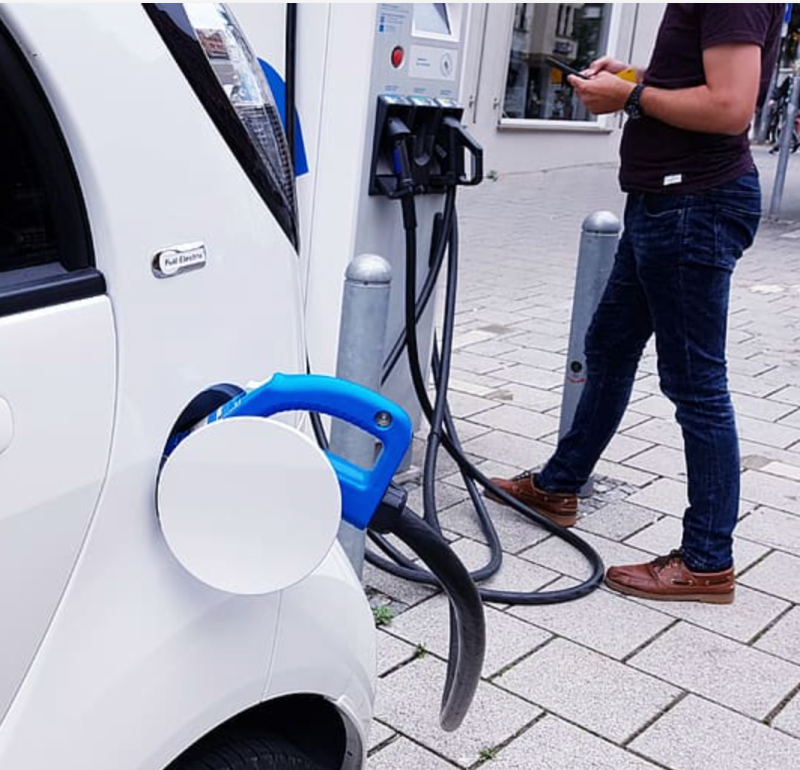 Automakers are lining up in support of President Biden’s new fuel economy standards that will speed the transition to electric vehicles — but only if Congress passes the car-centric reauthorization and reconciliation bills that will hand Americans billions in free federal money to buy their cars.

In a joint release Thursday, “Big Three” car manufacturers Ford, General Motors and Stellantis celebrated the president’s executive order that would roll back former President Trump’s loosening of fuel economy standards and set a series of more aggressive standards over the next decade, as part of a larger White House goal to have electric vehicles represent half of new vehicles sold by 2030.

But the triumvirate of automakers also cautioned that it can’t accomplish that “dramatic shift” without “the timely deployment of the full suite of electrification policies … including purchase incentives” and other investments that would make plug-in vehicles a realistic solution for more Americans.

Biden seemed open to that feedback, considering that he invited the companies’ CEOs to stand alongside him at his press conference about the new fuel standards, and followed up his speech with a few laps in a green megacar on the White House law. (Editor’s note: this was not his first joyride.).

Biden zips around WH in hybrid Jeep Wrangler as he pushes for HALF of new cars to be emission-free by 2030 https://t.co/mmCewmqWHU pic.twitter.com/7whAtxuMYa

The automakers’ not-so-subtle hint about their federal policy wish list was widely interpreted as a reference to an impending, as-yet-unnamed $3.5 trillion “human” infrastructure budget resolution focused on priorities like housing, healthcare, and daycare — and which many advocates speculate will also tack on billions aimed at tempting drivers to purchase electric cars.

A whopping $100 billion in consumer incentives (and $15 billion more for EV fueling infrastructure) were included in the first draft of Biden’s infrastructure stimulus, the American Jobs Plan, but as that legislation morphed into the sprawling Bipartisan Infrastructure Bill, it was whittled down to just $15 billion, split evenly between chargers on interstates and electrifying the nation’s bus fleet. Details of the reconciliation bill remain vague, but it is widely expected to restore much of what electric car champions lost in the negotiations — though the same isn’t rumored for transit, biking and walking investments, all of which got negotiated down substantially, too.

TFW you remember that America only builds infrastructure if it serves the car culture, corporate hegemony and sprawl. https://t.co/isOehgvzKS

That news was met with frustration by mode shift advocates, who say Biden’s over-focus on electric vehicles as a silver-bullet climate solution will come at a steep cost to the modes that scientists agree hold the real key to saving the planet without accelerating the national traffic violence crisis: transit, biking and walking.

“While electrifying our personal vehicles is key, that is only part of the solution to our transportation woes,” said John Stout of the U.S. Public Interest Research Group. “In addition to garnering the federal government’s support for a faster transition to EVs … we need to make it easier for people to drive less.”

Bit of a shell game w/ electric cars- it’ll reduce smog from cars but it shifts even more power generation to power plants, most of which run on coal, gas, or oil. https://t.co/pxI70uHsiR

To complicate matters even further, Biden has said he will not sign off on the bipartisan “hard” infrastructure bill, which would mostly fund transportation initiatives, unless Democrats also agree to pass the “human”-infrastructure (with-a-heaping-side-of-electric-cars) bill via reconciliation.

That’s bad news all around for progressive advocates dissatisfied with the mixed-bag bipartisan bill. The $1.2-trillion legislation would provide a handful of important wins for active transportation users and a historic $39 billion stimulus for transit agencies, but it would undermine those victories with equally historic spending on new highways. (And again: that’s before the fate of the bill was essentially leashed to a massive handout for electric car buyers.)

“You cannot fill a hole with a teaspoon that’s still being dug with an excavator,” Beth Osborne, director of Transportation for America, said in a statement on the bipartisan legislation. “In its current state, this deal fails to accomplish the administration’s goal of reducing emissions, preserving both the status quo of easy money to build new highways (while neglecting basic repair needs) and the existing, complex hurdles to build transit.”

Advocates like Osborne are hoping that the bipartisan bill can at least partly be salvaged through the amendment process, which could restore critical provisions like requiring states to at least spend their federal windfall on fixing the highways they’ve already got before they build more. (Here’s a call script on the most urgent amendments from NACTO.)

But if negotiations break down, advocates fear an even worse transportation deal might be brokered under the next Congress. Though Biden’s sought-after stimulus dollars for EVs and transit could die without becoming law, lawmakers are legally required to reauthorize the nation’s core transportation by 2023, and their next attempt could be disastrous if Democrats lose their triple majority on Capitol Hill, as many think they will.

That leaves sustainable transportation advocates between a rock and an electric Jeep — and America’s climate future riding on a pair of deeply imperfect bills that, for better or worse, are the country’s best chance at nudging our transportation outlook forward.