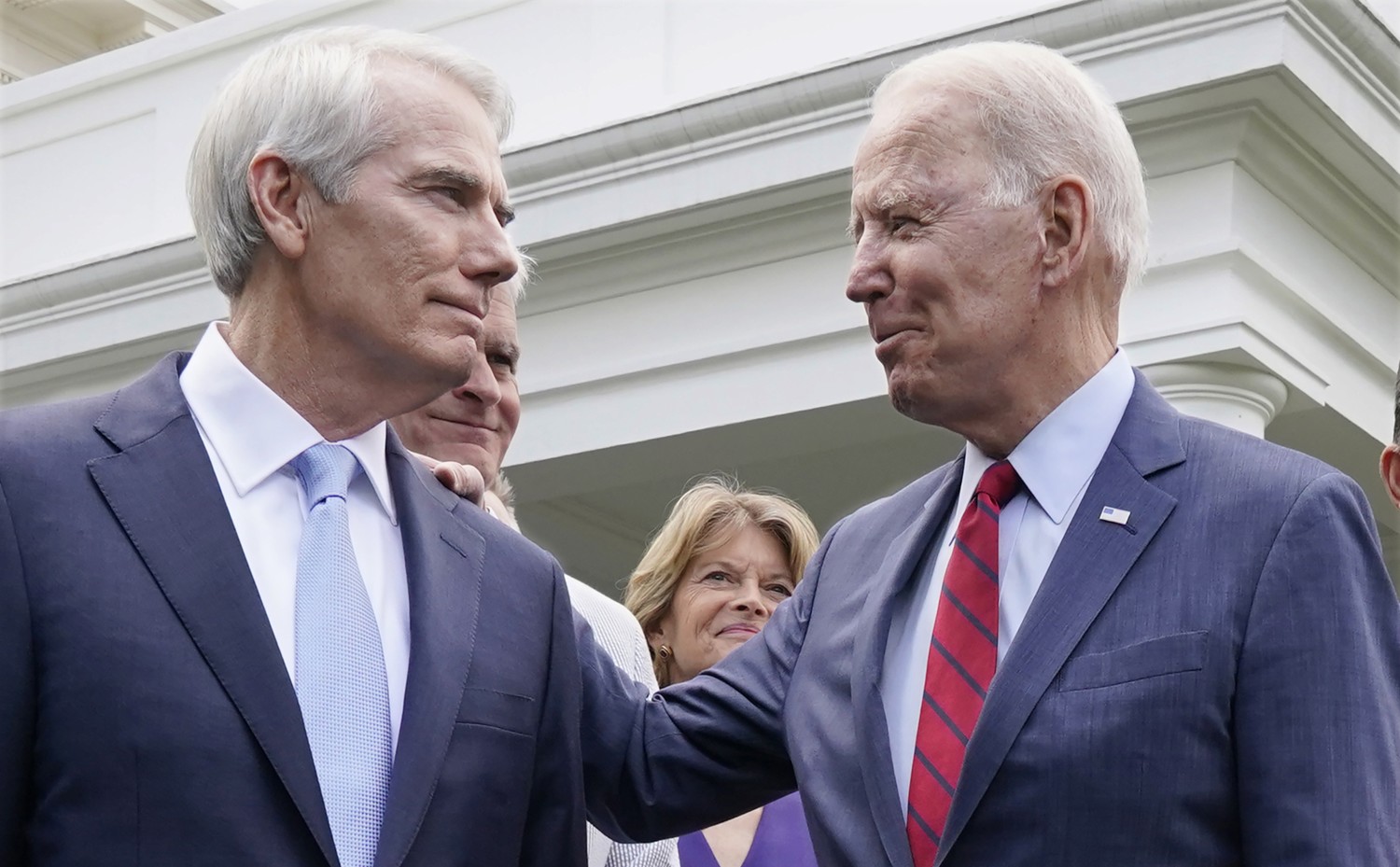 Senate Minority Leader Mitch McConnell has said he is “100%” focused on stopping President Biden’s agenda — and yet he voted with every Senate Democrat last week to set the stage for passing a bipartisan infrastructure bill that would be a major political win for the White House.

He wasn’t alone. Sixteen other Republicans opted to advance the legislation — in the face of multiple missives from former President Trump urging them to block it.

At a moment of such intense partisanship, this momentary alignment of incentives for Democrats and Republicans, set to vote in the coming days to pass the approximately $1-trillion package out of the Senate, is the Washington equivalent of a total eclipse. However rare and fleeting, Republicans and Democrats believe they are serving their own self-interests, not just the president’s, in voting to pass a bipartisan bill to improve roads, bridges, rail lines, water pipes and broadband networks.

“Every incumbent benefits from the sense that the Congress can figure out how to get important things done,” said Sen. Roy Blunt (R-Mo.).

Upon passing the bipartisan plan as soon as this weekend, Democrats hope to soon approve the framework for a second bill, a sweeping Democratic proposal that includes massive subsidies and tax breaks for working families, free preschool and community college, a large expansion of Medicare and other tax cuts. Knowing no Republicans will support that measure, Democrats plan to utilize a process known as reconciliation, which requires just 50 votes for passage.

After Trump failed to achieve infrastructure legislation — his repeated efforts to promote “Infrastructure Week” became a running Washington joke — Biden has sought to leverage his 36 years of experience in the Senate to pursue a domestic program modeled after President Franklin Roosevelt’s New Deal.

Taking office amid the COVID-19 pandemic, Biden and Democrats brushed aside Republican opposition in March to enact a $1.9-trillion relief bill. But the decision to pivot to infrastructure, according to multiple administration officials, was based on a view that legislation focused on economic recovery was the logical next step and provided Biden an opportunity to notch a bipartisan achievement.

“The president always felt like this is a bill that’s going to get Republican support because these are issues that have always been bipartisan,” said Anita Dunn, counselor to the president, in an interview. “We haven’t had a major infrastructure bill in this country for a long time, and there’s desperate need for it.”

President Obama, who provoked strong reactions from the GOP base, exhausted precious political capital in his first two years in office on a more ideological push for healthcare reform. Conversely, Republicans have struggled to negatively define Biden, and his prioritization of infrastructure legislation has maintained broad public support and generated little political backlash.

Seven in 10 Americans back the bipartisan infrastructure proposal, according to a Monmouth University poll that the White House cited in a memo to lawmakers this week. The initiative also has the backing of the U.S. Chamber of Commerce and other trade groups, as well as the country’s largest labor unions.

With both parties looking ahead at the 2022 midterm election that will decide control of Congress, several Republicans have calculated there’s more risk in outright obstinacy than occasionally meeting the president in the middle.

“If you’re a Republican, you want to prove that you’re not just here to completely block and stop the entire agenda,” said Sen. John Thune of South Dakota, the No. 2 Republican in the Senate. “It’d be good maybe for the administration and they probably need a win right about now, but I also think that there are benefits politically to members on both sides.”

Biden’s push for bipartisan legislation has required persistence, flexibility and legislative acrobatics. After talks with Republicans faltered in early June, Biden encouraged his team to engage with a bipartisan group of senators drawing up their own infrastructure plan. After agreeing to a basic framework, Biden nearly torpedoed the effort by saying he wouldn’t sign it until Democrats passed their own companion bill — a likely $3.5-trillion package through the budget reconciliation process.

Though Biden quickly walked back that comment, his blunt assertion underlined his pursuit of a two-track approach that has proven — so far— to be politically shrewd.

The two bills, in theory, placate both ends of the president’s party: moderates craving a return to bipartisan deal-making and progressives eager to enact a broader agenda — giving Democrats, as some Republicans have argued, a chance to have it both ways.

“If you can get major legislation through with support from both parties, in Washington right now, that is a major accomplishment,” said Mike DuHaime, a GOP strategist in New Jersey. “He’s giving cover to a lot of Democrats in swing districts who need it. And it does give him freedom to go in a more partisan direction on other things.”

But the bifurcated approach also benefits Republicans. By backing the bipartisan bill, they can showcase a willingness to work with a Democratic administration to advance shared goals, while vehemently opposing the Democrats’ second bill, a release valve for the partisan steam that animates the party’s base.

“For Republicans, it’s a two-fer,” said Whit Ayres, a GOP pollster. “There’s lots to like in both positions.”

Sen. Kevin Cramer (R-N.D.), who has supported the bipartisan bill while opposing the Democrats’ reconciliation measure, is OK giving the president a bipartisan “win,” believing GOP lawmakers will benefit from delivering their voters long-needed improvements and projects.

“Not every transaction requires a winner and a loser,” Cramer said. “Some transactions can have winners on both sides. I think infrastructure along with national defense are the policy issues that provide opportunities for us to do the right thing.”

Republicans also feel confident that any bipartisan credit Biden receives from the deal will come crashing down when Democrats turn to the partisan proposal.

“The problem he’s going to have is he’s going to shift within minutes of passage of this bipartisan bill into a hyper-partisan bill,” Cramer said. “He will in that moment, I think, squander all the goodwill he would rightfully deserve.”

Republicans plan to attack Biden for ramming through a costly partisan bill immediately after reaching across the aisle. They have already warned that Democrats will attempt to raise taxes on higher earners to pay for the plan.

But drawing a clear distinction between the two bills could be something of a challenge. Republicans “want to be sure voters understand the difference in this bill and the next bill,” said Blunt, the Republican senator from Missouri. “And it is a fairly hard sell.”

To that end, McConnell and other Republican leaders, such as Sen. Rob Portman of Ohio, who led negotiations on the bipartisan proposal, have stressed to their colleagues in closed-door lunches that the two bills are separate — that backing the infrastructure plan doesn’t amount to enabling the Democrats’ larger agenda.

Many Democrats believe the tangible benefits for Americans in their go-it-alone measure — and potential tax hikes on people earning more than $400,000 a year that would pay for the new programs — are popular, setting up their 2022 campaigns to draw sharp distinctions with their GOP opponents.

“I look forward to running on both bills,” said Sen. Michael Bennet (D-Colo.), who is up for reelection next year. “After years and years of obstruction, years and years of just partisan warfare that hasn’t delivered much for the American people, we now, with these two bills, are going to deliver quite a lot.”