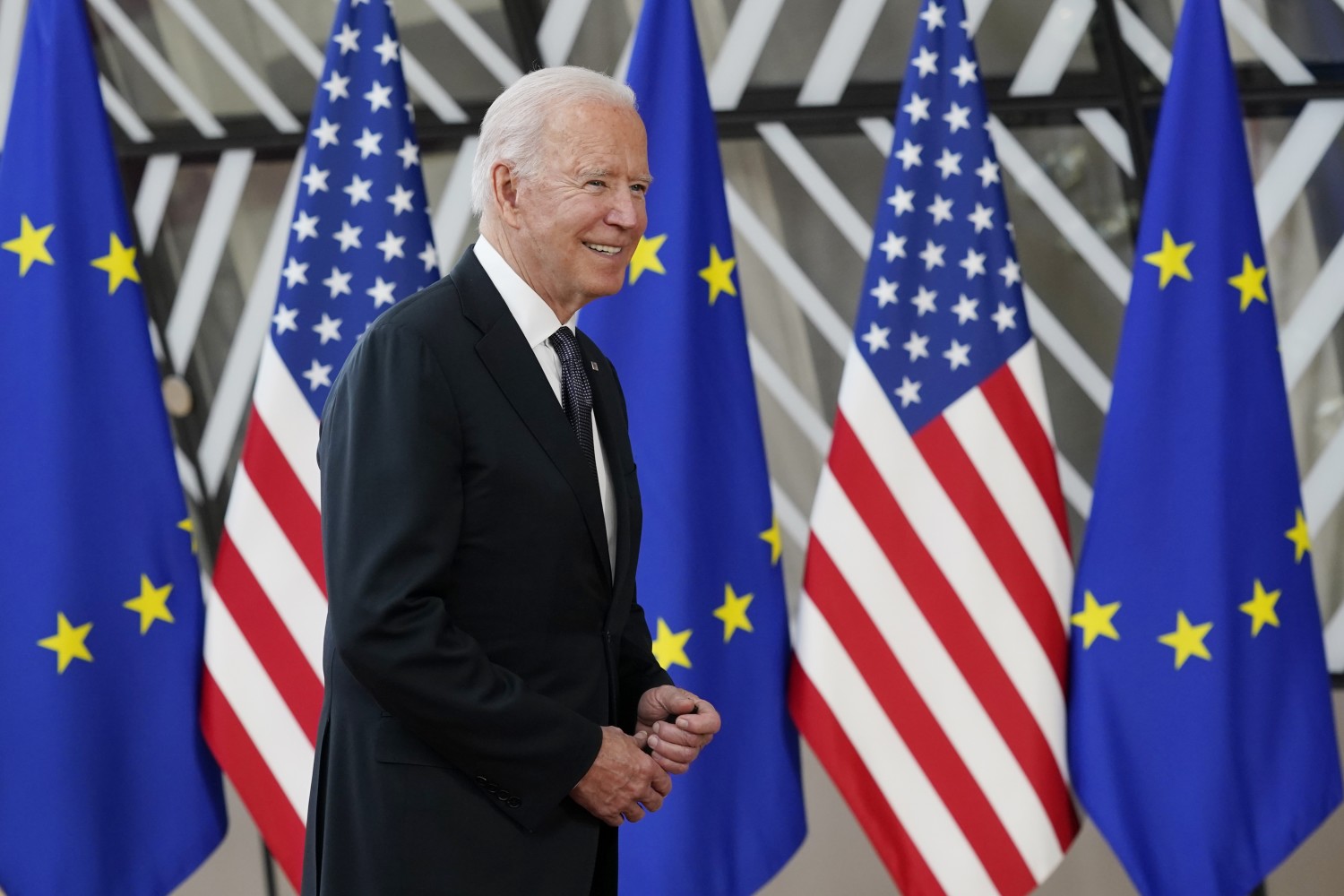 President Biden, nearing the end of an overseas trip aimed at restoring strong relationships with America’s allies, announced an agreement Tuesday with the European Union to end a 17-year dispute over aircraft subsidies. The announcement appeared to give the president another “win” a day before his much anticipated meeting with Russian President Vladimir Putin.

And it set the stage for his meeting with the leaders of the European Council here, the last of his conversations with dozens of allies over six days before he heads to Geneva to sit down with Putin on Wednesday.

That high stakes summit will be Biden’s first face to face since taking office with an adversarial leader, and it comes roughly three years after Putin met President Trump in Helsinki. Unlike Trump, who publicly backed Putin’s denial of Russian interference in the 2016 U.S. election over the conclusions of U.S. intelligence officials, Biden is eager to deliver a stern warning to the Russian leader — although it will occur in private, with both men set to meet the press separately after meetings that could last as long as five hours, according to the White House.

“I’m going to make clear to President Putin that there are areas where we can cooperate, if he chooses,” Biden said during a press conference Monday following a day of meetings with NATO allies. “And if he chooses not to cooperate and acts in a way that he has in the past, relative to cybersecurity and some other activities, then we will respond. We will respond in kind.”

Biden also sought to defuse tensions somewhat, refusing to say that he still thinks Putin is “a killer” as he said in past interviews, instead describing him as a “worthy adversary.”

White House officials scheduled the trip so that Biden would come into the meeting with the Russian leader “with the wind at his back” after nearly a week of conversations with allies at the G-7 summit in England and at NATO. Tuesday’s agreement on aircraft subsidies for Boeing and Airbus, along with the EU meetings, were set to further that goal.

Much of the conversations with allies over the last week focused on new joint ventures by democratic nations to tackle global challenges like climate change, tcoronavirus and cybercrime — as well as to counter the rising economic and military influence of China and other autocracies.

“America is back on the global scene,” said Charles Michel, the president of the European Council, during a brief back-and-forth with reporters. “It’s great news for allies, also great news for the world.”

Ursula von der Leyen, the president of the European Commission, was blunt about the damage done to the transatlantic alliance. “The last four years have not been easy,” she said. “The world has dramatically changed. Europe has changed. But we wanted to reassure you: We are friends and allies and we are very much looking forward to working together.”

Both sides agreed to suspend the punitive tariffs at the center of the long-running dispute following two days of negotiations here between Katherine Tai, the U.S. trade representative and Valdis Dombrovskis, the E.U. trade commissioner.

Tai, who briefed reporters Tuesday morning, said the agreements would suspend the tariffs for another five years while both sides worked together to counter China’s investment in the aircraft sector. But, according to Tai, the agreement limits the subsidies the E.U. can give to Airbus and allows the U.S. to reimpose billions and tariffs if the E.U. crosses what she called “the red line.”

“These tariffs will remain suspended, so long as E.U. support for Airbus is consistent with the terms of this agreement,” she said, adding that if not, and if “ U.S. producers are not able to compete fairly and on a level playing field, the United States retains the flexibility to reactivate the tariffs that are being suspended.”

The tit-for-tat tariffs between the U.S. and Europe escalated during the Trump administration, given the former president’s eagerness to crack down on countries he believed were taking advantage of Washington’s overly generous trade policies.

The agreement means that significant punitive tariffs estimated at $11.5 billion, on a wide range of products including wine, tractors, spirits, molasses and cheese, will continue to be suspended after both sides had agreed to do so in March while they tried to settle the dispute.

Trump slapped tariffs on industries that have nothing to do with aircraft production, from French winemakers to German cookie bakers in Europe and U.S. spirits producers in the United States.

Shortly after Biden took office, the U.S. and E.U. agreed in March to a temporary truce for four months. The new agreement will take effect in July.