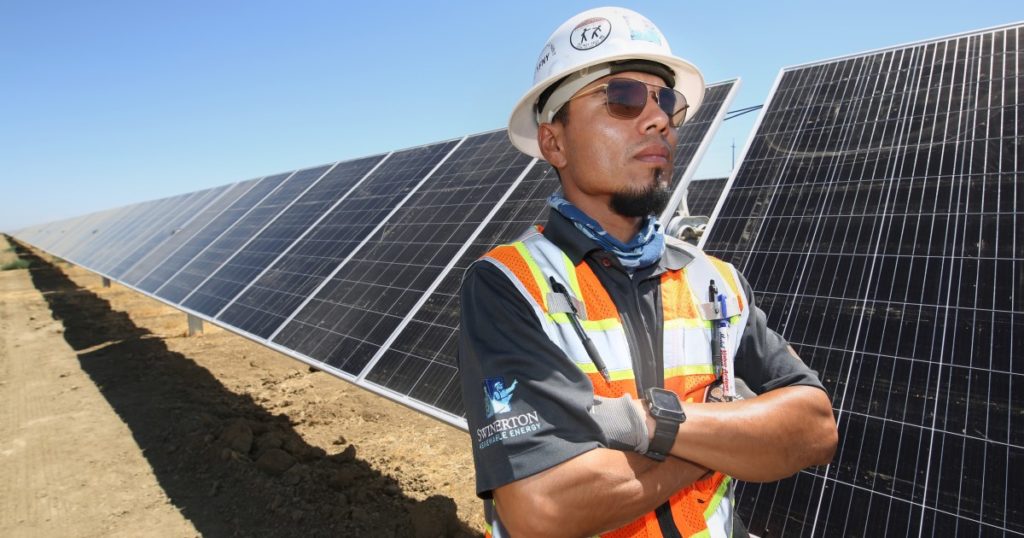 The steel beams cut across the brown dirt like scaffolding baking under the Central Valley sun when the workers pulled up.

One maneuvered a tractor towing a trailer stacked with solar panels, while another handed down the panels to eight other laborers. They carefully arranged the gleaming photovoltaics and tilted them toward the sun. Two more workers fastened the panels to steel beams with pneumatic guns.

The crew was one of many spread across former farmland on a recent afternoon in Kings County, where Westlands Solar Park is shaping up to be one of the world’s largest renewable energy facilities.

If President Biden successfully pushes his climate change plans through Congress, he’s hoping for a lot more jobs like these — good-paying, blue-collar union jobs. But it’s not a sure bet, and the transition away from fossil fuels could cause upheaval for some workers even as it produces new opportunity for others.

That’s because solar fields and wind turbines require fewer people to operate than natural gas plants and oil refineries. Not as many employees are needed to help electric cars roll down an assembly line. And when new clean energy jobs are created, some could be in less lucrative lines of work, like installing rooftop solar panels or weatherizing homes to increase energy efficiency.

“When the labor market does its thing, we produce tremendous wage inequality and tremendous growth in low wage jobs,” said Carol Zabin, who directs the Green Economy Program at UC Berkeley’s Labor Center.

Biden administration officials are trying to avoid those pitfalls and boost higher paying careers in climate-friendly energy as they seek to pass a massive budget plan this year. The $3.5-trillion package includes a system of financial incentives and penalties that’s intended to increase the amount of electricity that’s generated from carbon-free sources. There are also tax breaks for clean energy companies and incentives for domestic manufacturing operations.

“It’s something to be taken super, super, super seriously,” Zabin said. “It’s difficult to find comparable jobs at those good wages that those unions fought for over decades.”

Gina McCarthy, Biden’s top adviser on domestic climate issues, said the shifting energy economy — which has been driven as much by the falling costs of renewable power sources as it has by government policy — will ultimately generate new jobs in growing industries like building high-capacity batteries or even solar panels, which are primarily manufactured overseas.

“We are talking about expanding and enlarging the kind of job opportunities we have, while recognizing in some areas it may not grow but in other areas it may pick up,” McCarthy said in an interview.

Anthony Romano is one of the beneficiaries of that push. After spending a decade as a non-union roofer, he studied to be an electrician through a five-year apprenticeship program offered by the International Brotherhood of Electrical Workers, or IBEW, which involved working solar jobs during the day and taking classes at night.

“Roofing was always a job. I was looking for a career,” he said.

Romano oversees a team of about 60 people as a foreman for BEI Construction, the electrical contractor at Westlands Solar Park.

When The Times visited earlier this summer, there were more than 400 ironworkers, laborers, carpenters, electricians and operating engineers on the site, a cross-section of the types of jobs that can be generated by clean energy investment.

Most were installing panels manufactured in India while others were driving piles into the ground, digging trenches for electrical cables or assembling trackers that help solar panels follow the sun as it moves through the sky.

Construction crews have installed as many as 10,000 panels in a single day. They work from dawn into the evening, 10 hours a day, four days a week. Under an agreement signed by five trade unions and the developer, Los Angeles real estate firm CIM Group, workers typically earn anywhere from $33 to $50 per hour, not including health benefits and pensions.

That’s significantly better than the average wage for Americans working in solar, wind and other clean energy jobs, which is just under $24 per hour, according to a report from E2, a nonpartisan group that advocates for those technologies. Of the 3 million clean energy jobs the group tallied last year, 2.1 million were in energy efficiency, which includes installing modern lighting and heating and air conditioning systems that use less electricity.

Across the board, clean energy workers tend to earn more than the national average for hourly wages. But that may be cold comfort to oil and gas company employees, who have seen their industry shrink and worry the state will regulate them out of existence. Fossil fuel jobs pay more on average and are more likely to be unionized than solar and wind positions, according to the Bureau of Labor Statistics.

Bob Keefe, the executive director of E2, said government needs to do more to ensure that workers in emerging industries benefit from better salaries and union representation.

“Is that where it needs to be? It probably needs to be higher,” he said.

Clean energy supporters say there’s a huge opportunity, in California and across the country, to train fossil fuel workers for the jobs of the future — especially since the skills needed for those jobs are useful for other trades, too.

“Anytime an industry changes or shifts direction, there’s always going to be people that are affected both ways,” Romano said. “But I think the renewables are just important, especially with the power shortages and all of that stuff in California.”

Romano lives in the Bay Area city of Hayward and commutes to the San Joaquin Valley during the week. But the solar project’s developer estimates that around 90% of the workers on site are local.

George Fernandez, a quality control foreman who lives in the San Joaquin Valley, oversees more than two dozen employees. He works for Swinerton Renewable Energy, the main project contractor, and he said he much prefers this assignment to his previous jobs at cable and pest control companies.

“I’m not crawling underneath crawl spaces anymore. That’s a plus, you know?” he said with a laugh, after demonstrating how his crews make sure solar panels are properly secured. “I get fresh air. I’m getting some rays of sun.”

Renewable energy skeptics sometimes point out that the bulk of the jobs are temporary — it may take a few hundred people to build a solar or wind farm, but only a handful are needed to operate the facilities once they’re finished.

Fernandez, though, isn’t worried about having to find another job anytime soon. That’s because Westlands Solar Park is so big. The first phase — 250 megawatts across 1,800 acres — is on track to finish construction this fall. But the developer plans to expand the site to 2,700 megawatts over more than 20,000 acres, a process that could take the rest of the decade.

Most solar projects aren’t nearly that size. But many of them will be needed to wean California — not to mention the rest of the country — off fossil fuels. State officials estimate that to meet its goal of 100% clean electricity, California may have to build as much solar and wind power every year for the next quarter-century as it’s ever built in a single year until now.

CIM Group co-founder Avi Shemesh pointed to another reason to expect more growth in renewable power jobs: improving technology. He said he expects solar to get so much cheaper that it will make sense to “re-panel” facilities within the next decade — in other words, tearing out the original panels and replacing them with new ones capable of generating more electricity.

Solar and wind farm operators are also increasingly adding batteries that can store electricity for times when the sun isn’t shining and the wind isn’t blowing. Specially trained workers are required to build and maintain those devices.

For CIM, using union labor was an easy choice, in part because the five-trade agreement helped build political support for the project.

“You’re not going to make or break the project by saving a little more on labor,” Shemesh said.