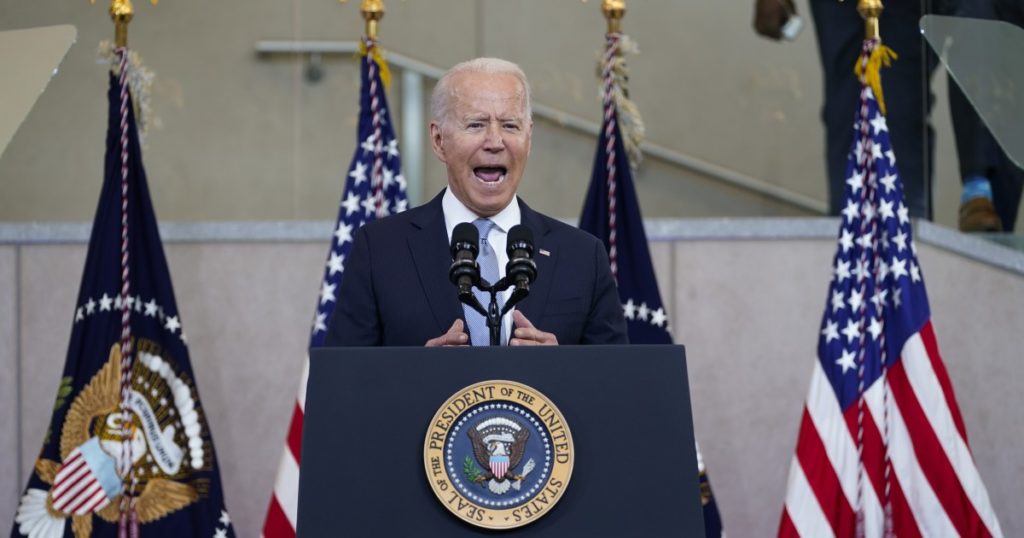 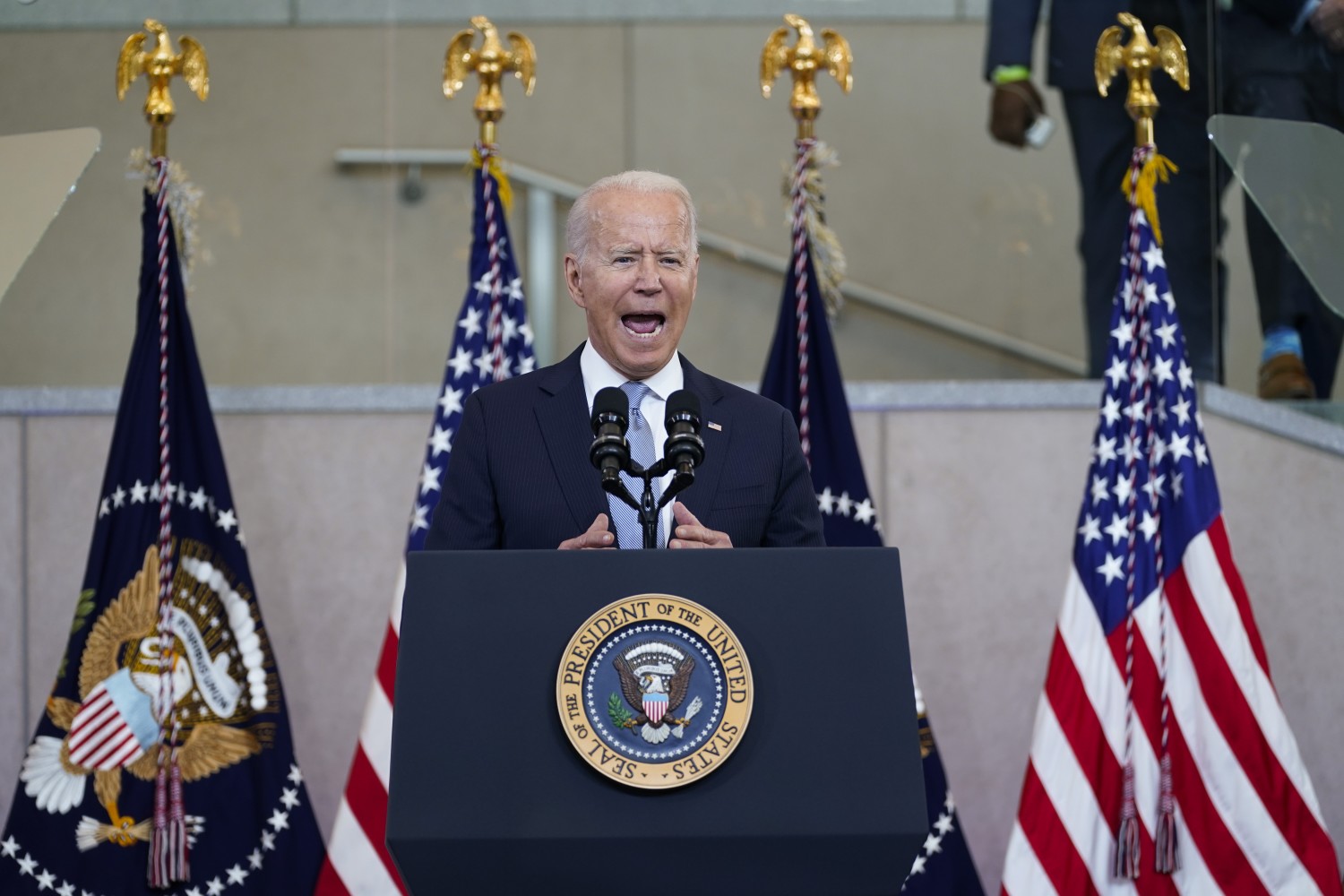 President Biden decried new Republican-backed state laws restricting voting rights on Tuesday, calling them “unconscionable” attempts to “deny the will of the people” — primarily, people of color — and “the most significant test of our democracy since the Civil War.”

“There’s an unfolding assault taking place in American today, an attempt to suppress and subvert the right to vote and free and fair elections — an assault on democracy, an assault on liberty, an assault on who we are, who we are as Americans,” he said in a speech at the National Constitution Center in Philadelphia, a venue chosen for its symbolic value.

“I am not saying this to alarm you,” he continued, speaking directly to the audience. “You should be alarmed.”

The remarks, the president’s most forceful on the subject to date, served as a rebuke to Republicans in the states and Congress and a rallying cry to Democrats ahead of next year’s midterm elections. But while Biden vowed to “vigorously” challenge any efforts to disenfranchise voters — efforts he called a “21st century Jim Crow assault” — he was blunt about the dim prospects in a deeply polarized Congress for Democrats’ proposed legislation to counter the Republicans’ state statutes by strengthening federal voting rights laws.

“Legislation is one tool but not the only tool,” he said.

He blasted Republican attempts to limit ballot access and, in some states, to allow partisan election officials more latitude to throw out ballots. It was, he said, “the most dangerous threat to voting and free and fair elections in our history.”

At one point, raising his voice, Biden spoke as if directly addressing Republicans: “Have you no shame?” He went on: “Will you deny the will of the people? Will you ignore their voices? We have to ask: Are you on the side of truth or lies?”

Yet despite Biden’s muscular rhetoric, many activists in the party’s base remained chagrined at his unwillingness to embrace their calls for the Democratic-controlled Senate to scrap the filibuster rule, which effectively requires a supermajority of 60 votes to take up most legislation and is the primary impediment to voting rights legislation and other Democratic priorities. Biden did not mention the filibuster issue or the moderate Democratic senators who oppose changing the rule.

Ezra Levin, a co-founder of the progressive group Indivisible, tweeted after Biden’s speech: “This was a pathetic pile of political pablum, not the launch of a campaign to save our democracy. You can’t win the fight if you refuse to even NAME the main obstacle to winning.”

However, the House majority whip, Rep. James Clyburn (D-S.C.), suggested in an interview Monday that Biden could be discussing the issue privately with key Democrats and leaving the door open for supporting a move against the filibuster later.

“I just don’t think you negotiate these kind of issues from the microphone,” said Clyburn, a close Biden ally. “You do it much better from the telephone.”

The Senate, which is evenly divided, failed to advance a sweeping voting rights bill last month after all 50 Republicans voted against bringing it to the floor for debate. The For the People Act, which the House passed in March, proposed a federal law to establish automatic voter registration, expand early voting, ensure more transparency in political donations and limit partisan gerrymandering of congressional districts, among other provisions.

Biden called the legislation “a national imperative” and also expressed support for a second proposal to create the John Lewis Voting Rights Act, which proposes narrower reforms and could receive a vote in Congress before the end of the year.

He defined the Republicans’ actions on voting access and rights as antithetical to American democracy and based entirely on former President Trump’s “big lie” that he lost the 2020 election to Biden because of rampant fraud.

“‘The big lie’ is just that, a big lie,” Biden said, calling the election “the most scrutinized” in American history. He took aim at Trump without naming him: “In America, if you lose, you accept the results, you follow the Constitution. You don’t call facts fake and then try to bring down the American experiment just because you’re unhappy. That’s not statesmanship, that’s selfishness.”

The speech came as about 50 Democratic state lawmakers from Texas were in Washington to lobby for action, having fled Austin on Monday in a dramatic attempt to block another GOP-backed elections bill by denying state Republicans the quorum required for a vote.

The Texas Democrats similarly boycotted the Legislature in late May, but this walk-out was their first outside the state — to avoid any attempt to force their return to the state Capitol. The Texas Democrats are determined to thwart the Republican legislation to restrict voter access, bar 24-hour polling places and ballot drop-boxes and empower partisan poll watchers.

Vice President Kamala Harris on Monday praised the lawmakers for their “courage and commitment” while discussing voting rights in Michigan. She planned to meet with them as early as Tuesday. Biden has no such plans but “praised their courage,” according to Deputy Press Secretary Karine Jean-Pierre.

Progressive activists continue to pressure the administration to throw its weight behind filibuster reform.

John Fetterman, Pennsylvania’s lieutenant governor who is one of several Democrats running in a crowded Senate primary race, said, “President Biden wouldn’t need to come to Philadelphia today and give a speech on voting rights if Democrats in D.C. started to vote like actual Democrats. It is time for the Senate to abolish the filibuster and pass the For the People Act and the John Lewis Voting Rights Act.”

On Tuesday, the Declaration for American Democracy coalition, which includes more than 200 advocacy organizations on the left, issued a statement evoking the legacy of former Rep. Lewis, the civil rights icon who was savagely beaten by police officers during the 1965 march across the Edmund Pettus Bridge in Selma, Ala.

Jana Morgan, the group’s director, urged Biden to “act with urgency and do whatever is necessary to immediately pass the For the People Act, including changing the Jim Crow filibuster, to protect each American’s right to vote.”