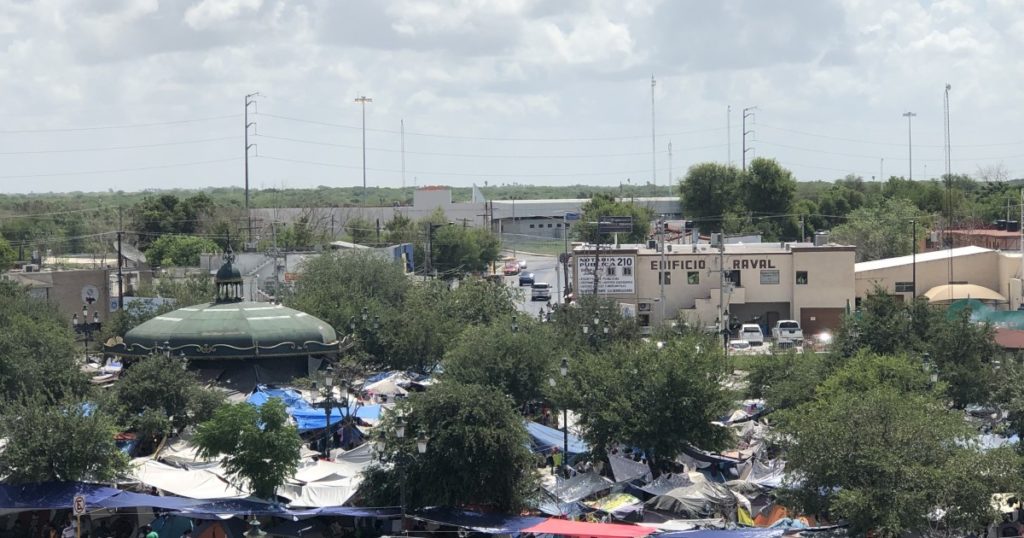 When Joe Biden was running for president, he promised to close a squalid border tent camp in Mexico where thousands of migrants had been left to await the outcome of their immigration cases by the Trump administration.

Last spring, Biden emptied the camp, allowing most of the migrants to claim asylum and enter the U.S. even as his administration continued enforcing a Trump pandemic policy that effectively barred most other asylum seekers.

Soon after the Matamoros camp was bulldozed last March, a new camp formed about 55 miles west across from the border bridge to the more dangerous, Gulf crime cartel stronghold of Reynosa. Now that camp and another in Tijuana are home to thousands of asylum seekers, many with spouses and children in the U.S. They’re expected to grow after federal courts reinstated Trump’s so-called Remain in Mexico program last week, making it even harder for asylum seekers to enter the U.S. legally.

“We all thought this would get better when Biden got the presidency,” said Brendon Tucker, who works at the camp clinic run by the U.S.-based nonprofit Global Response Management, which also ran a clinic at the Matamoros camp.

Instead, he said, Biden’s pandemic ban on asylum claims, “is creating worse conditions in Mexico.”

A White House spokesman declined to comment about the migrant camps, referring questions to the Department of Homeland Security.

Homeland Security said in a statement that, “This administration will continue to work closely with its interagency, foreign, and international organization partners to comply in good faith with the district court’s order [on Remain in Mexico] while continuing our work to build a safe, orderly, and humane immigration system that upholds our laws and values.”

In Reynosa, where about 2,000 migrants were living last week, conditions are in many ways worse than they were in Matamoros, Tucker said. There’s less potable water, fewer bathrooms, showers and other sanitation that U.S.-based nonprofits spent months installing in Matamoros. Mexican soldiers circle in trucks with guns mounted on top. Migrants face not only cartel extortion and kidnapping, but also COVID-19 outbreaks and pressure to leave from Mexican authorities. Fewer U.S. volunteers, including immigration lawyers, are willing to cross the border to help due to security concerns. Few at the camp understand their rights and U.S. pandemic restrictions, although they say they asked U.S. Customs and Border Protection agents about them before they were expelled.

“They didn’t tell us anything, they just left us here,” said Salvadoran migrant Emerita Alfaro Palacios, 34, who’s been living at the camp with her 17-year-old daughter Pamela since June, hoping to join her brother in Houston.

Migrants call the camp Plaza Las Americas, the name of the park it occupies. The first to arrive last spring holed up inside the central gazebo. Those who followed pitched tents outside, their warren of droopy tarps and clotheslines expanding daily. Gone were the mariachis who used to congregate in the park, in the shade of a dilapidated casino that still draws throngs on weekends. Last week, only the gazebo’s spindly roof was visible, like the center of an enormous, patched circus tent. Taxis and vendors still circled, selling fruit popsicles, tacos, pupusas and other dishes catering to hungry migrants, mostly Central Americans. Many said they came to the border hoping Biden would allow them to claim asylum. Some had seen reports about how he helped those at the camp in Matamoros.

Many Reynosa residents and officials consider the camp an eyesore.

Standing on the roof of a nearby building overlooking the camp last week, maintenance worker Hector Hernandez Garrido, 33, said it was the responsibility of the U.S. to accept the asylum seekers. He said he feared the camp was contaminated by COVID-19 and other diseases.

Two weeks ago, Reynosa authorities removed cook stoves from the camp kitchen, citing safety risks. They pressured U.S. volunteers to stop cordoning off a section of the camp for migrants who had tested positive for COVID-19, and have threatened to cut the camp’s electricity and water supply.

“They want us out,” said Gina Maricela, a Honduran single mother and nurse at the GRM clinic.

It’s not clear where the migrants would go. Last month, Reynosa officials also launched a legal battle to demolish the city’s primary nonprofit migrant shelter, already home to hundreds, arguing it lies in a floodplain. Felicia Rangel-Samponaro, who has been crossing the border daily to help migrants at the Reynosa camp through her nonprofit Sidewalk School, said they rented a 20-room hotel for those who are COVID-positive to quarantine. They may build a new camp, she said, but that would take weeks and cost tens of thousands of dollars.

“It’s exactly like Matamoros, but with less support,” Rangel-Samponaro said. “Cut what you like, that’s not going to stop the encampment.”

As in Matamoros and other border cities in the surrounding Tamaulipas state, it’s not city officials or even migrants who ultimately control the plaza — it’s the cartel. Migrants who enter or leave the city without paying a smuggler risk getting kidnapped and held for ransom. So do those who leave the camp, even for a few hours to shop or look for work.

Honduran migrant Lesly Pineda, a factory worker who’s three months pregnant, said she and her 11-year-old son Joan were kidnapped with eight other migrants in July and released only after she paid a $2,000 ransom. A single mother, Pineda, 33, then took her son to the border and sent him across the Rio Grande with a smuggler. He remained at a federal shelter in Texas last week, she said. She had left her two oldest children, ages 15 and 14, with her mother in Honduras.

Pineda said she sold her house in Honduras to pay for her passage and couldn’t afford the return bus fare to southern Mexico, about $125, let alone to Honduras. So she hid in the blue tent she shares with a few other migrant women at the camp, emerging only to buy food from vendors on the park’s perimeter. Pineda still hopes to cross the border and join a friend in Mississippi, but she’s not sure how long she can afford to stay at the camp.

“There is always extortion,” she said, “They charge for everything.”

Mexican church volunteers bring donated meals sporadically, and supplies are limited. Last week, one group handed out a cup of water per person and a single lollipop per child.

“There are some days we don’t eat,” said Honduran Abel Garcia, 37, as he sat with his 11- and 7-year-old daughters on the gazebo steps last week.

They were trying to reunite with his wife and 3-year-old son, who crossed the border in May and settled in Atlanta.

Vendors at the camp charge at least 70 pesos for a hot meal, about $3.50, too expensive for many of the migrants. Last week, a five-months pregnant Honduran woman went without eating for three days until she ended up at the camp clinic, dehydrated.

It costs 30 pesos to shower in concrete stalls on the corner next to a taqueria, 10 pesos to use the taqueria’s bathroom or to buy a bottle of water, 5 pesos to charge a cellphone.

Torres, like others, ended up at the camp after unsuccessfully attempting to cross not only the border, but also remote Texas ranches to circumvent Border Patrol highway checkpoints. It’s a deadly gamble as afternoon temperatures still routinely climb above 100 degrees in South Texas.

Torres, 43, a cook, said he watched a fellow migrant die of dehydration on a ranch near Roma, Texas, last month.

“He died in my arms,” Torres said, and then the smuggler “left me for dead.”

Torres and the half a dozen migrants in his group were rescued by Border Patrol agents, who later expelled them to Reynosa, he said. He had crossed the border after being kidnapped at a local shop where he had gone to buy food and was held with scores of others for a month until he paid $4,000 ransom.

Torres, who has an adult daughter and two granddaughters back in Guatemala, still ventures out of the camp to work odd jobs. He fears cartel kidnappers, Mexican police and taxi drivers lingering at the edges of the camp, because other migrants who have hailed taxis at the camp were later kidnapped.

“The whole world here is a red zone of corruption. There’s no escape,” Torres said, “If they kidnap me again, they’re going to kill me because I have nothing to give them.”

At night, Torres spreads a piece of cardboard in one of the camp’s dirt alleys, unwilling to occupy a tent that would otherwise house women and children. During the day, he shares a folding chair with other migrants. He watches Reynosa residents arrive to volunteer and drop off donations. Last week, a priest prayed with dozens of migrants, kneeling on the park’s dusty brick walkways.

Others come to taunt the migrants, Torres said. Local social media is full of criticism.

“There is always racism, there is always, ‘Why you are here? Go back to your country, you are not welcome in Mexico,’” Torres said.

Like most other migrants in the camp, Torres does not have access to masks, COVID-19 tests or vaccines. He mistakenly believed the camp had somehow escaped the virus because he and his immediate neighbors didn’t have symptoms. U.S.-based nonprofits have raised money to test migrants at the camp and confirmed dozens of COVID-19 cases since it opened, but testing is sporadic and not federally funded. About 200 migrants are treated daily at the camp clinic.

Honduran Gloria Guardado Diaz, 25, said that where she was sleeping, on blankets spread across the concrete floor of the gazebo with her 7-year-old son David, no one seemed to have COVID-19 — except him.

“He coughs all night, he can’t sleep, he can’t breathe,” she said as they sat amid dozens of other families last week.

In the evenings, the sound of migrants’ coughs fills the camp. Vendors vanish, replaced as darkness falls by male migrants guarding the perimeter. Unarmed, the lookouts patrol the cracked sidewalks. They pass empty park benches, bus stops, water park ads saying “Enjoy Reynosa!” and a sign pointing toward the border bridge they hope to one day cross.