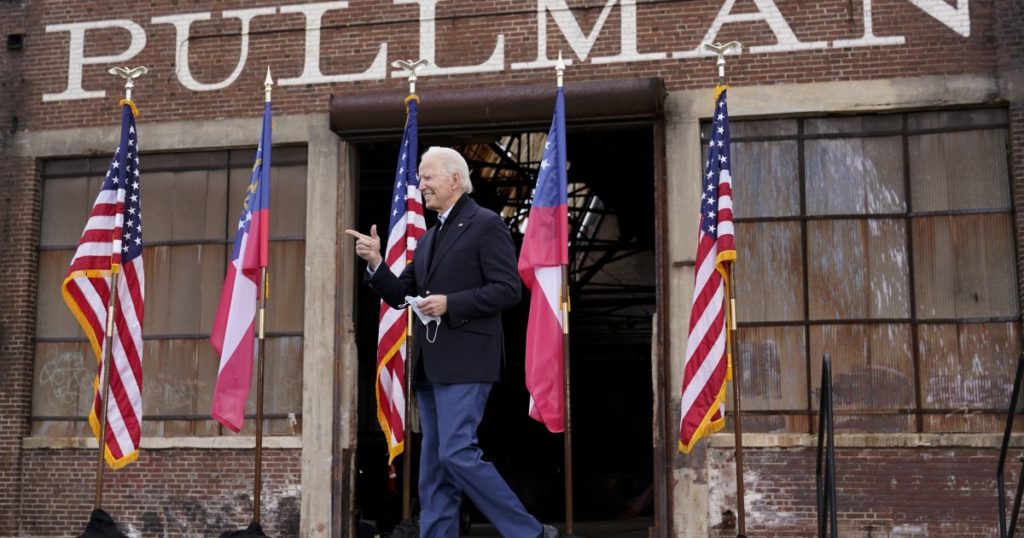 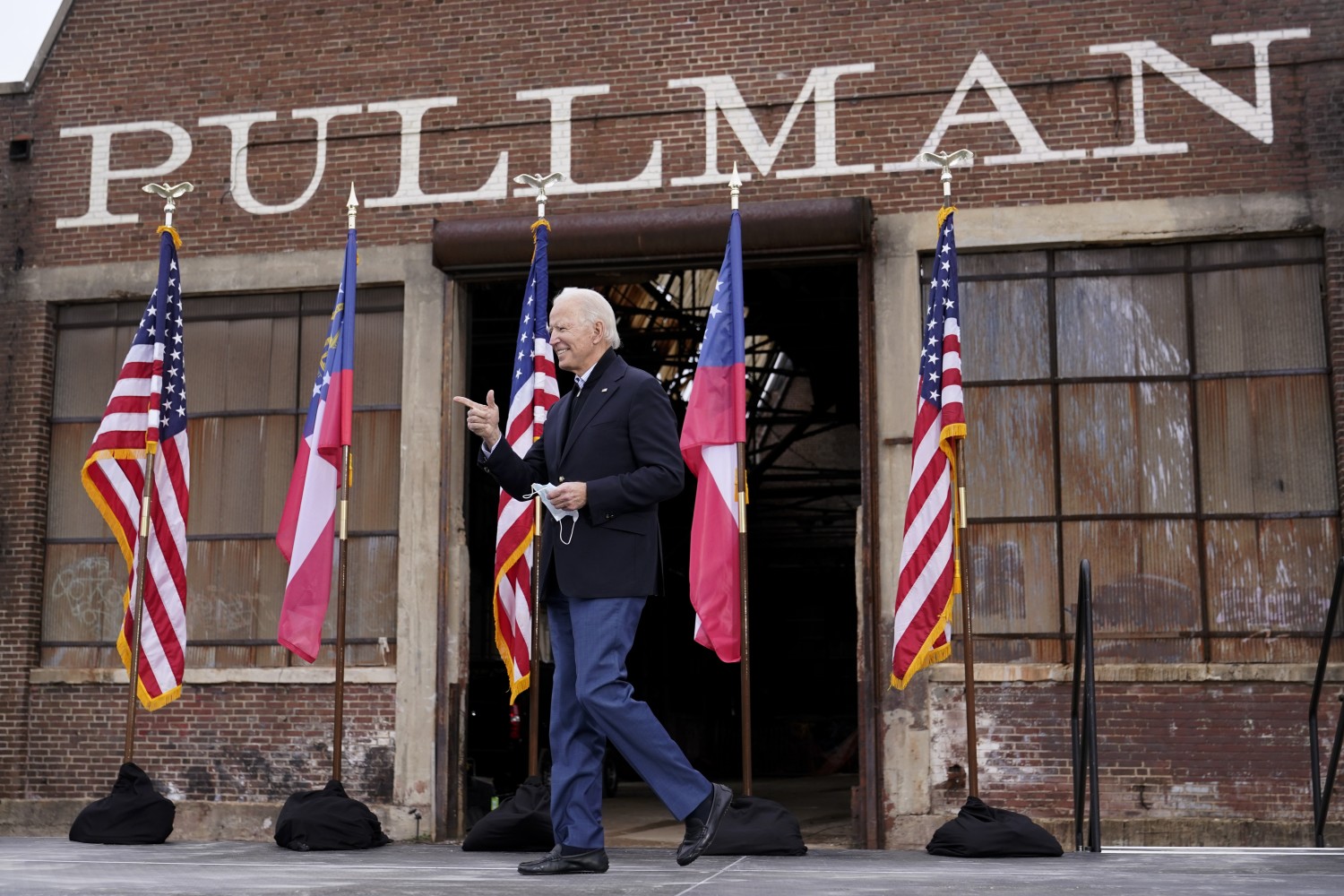 More than a quarter-century ago, when a Democratic presidential candidate last won in Georgia, Bill Clinton took a post-election swing through the state to help its senator win an overtime political runoff. Despite Clinton’s energetic campaigning, including a riff on his saxophone, then-Sen. Wyche Fowler lost to the Republican challenger.

On Tuesday a much older and less jazzy Democratic president-elect came to campaign, hoping for better results. For Joe Biden, much more is at stake: the two Georgia candidates in Senate runoff races to be decided Jan. 5 represent Democrats’ last chance for a Congress controlled by his party.

Buoyed by Monday’s electoral college vote, Biden was the featured attraction at a drive-in rally in Atlanta for Democratic candidates Jon Ossoff and Raphael Warnock, and he used the occasion to celebrate his triumph over Trump’s efforts to overturn the election results — including in Georgia, where the president demanded three recounts.

“I’m starting to feel like I won Georgia three times,” Biden said, and he predicted an upset victory for the two underdog Democrats running against incumbent Republican senators. “I think Georgia is going to shock the nation.”

The mere fact that Warnock and Ossoff welcomed Biden and joined him onstage — this rally was their second with him — underscored how much the state’s politics have changed. For years, an article of political faith for statewide Democratic candidates was to steer clear of national party figures typically seen as too liberal for the South. Now, some national Democrats — especially moderates like Biden — are no longer political kryptonite.

“Rather than shying away, we’re trying to embrace him,” said Michael Thurmond, the chief executive of DeKalb County.

The Jan. 5 runoff election is a watershed moment for Biden: If both Democrats win their races — Ossoff against Sen. David Perdue, Warnock against Sen. Kelly Loeffler — Biden’s party will seize control of the Senate, dealing a blow to Republicans’ ability to block his agenda and nominations. But if even one Republican wins, the GOP keeps its Senate majority and Biden’s administration will be hamstrung from day one.

“We are welcoming Joe Biden to Georgia, but, Georgia, we need to do right by Joe Biden,” Ossoff said at the rally. “We need to make sure Joe Biden can pass his agenda.”

A growing number of Republicans are parting ways from Trump and publicly acknowledging his defeat, even as the president fights on. But Loeffler and Perdue are not among them.

But Jack Kingston, a Republican former congressman from Georgia, said he hoped the electoral college result would allow Georgia Republicans to move beyond their disagreements about the presidential election. Since Biden won the state, the party has been divided by Trump’s false allegations of election fraud and his attacks on the state’s Republican leaders and election officials who refuted the president’s claims — and just when Republicans need to be united to win the runoff races.

“There is a level of discouragement with this circular firing squad we seem to be having,” said Kingston as he headed to a rally for Loeffler and Perdue on Tuesday. “The voters were willing to let us have this family squabble over Thanksgiving, but now they want us to be unified and focused on this Senate race.”

Democrats are counting on Biden’s visit to help keep his supporters engaged and prevent turnout from dropping, as it often does in runoff elections. State Rep. Erick Allen, a Democrat representing the Atlanta suburb of Smyrna, said Democrats’ top priority was to energize voters and there was no better spokesman than Biden.

“He’s one of the few people who can thread the needle of continuing to have the message of healing the country, but also explain to people how important it is that, as we heal, we heal with a Congress that would be more willing to work with him,” Allen said.

Biden spoke the day after early voting began in Georgia. More than 168,000 people voted in person on the first day, according to Michael McDonald, a University of Florida professor who tracks early voting. Ossoff spokeswoman Miryam Lipper said the campaign’s goal was to drive turnout to record levels. McDonald said that would be a challenge given the short time frame and the interruption of the holidays.

Ossoff and Warnock are trying to replicate Biden’s November victory. In that general election, the two Democrats received only 48% and 33% of the vote, respectively, enough to get to the runoff against the Republicans but short of Biden’s nearly 50%.

The rally was held in the Kirkwood neighborhood of Atlanta at the Pratt-Pullman Yard, a derelict heavy industrial site slated to become a mixed-use development anchored by film production facilities. A few hundred more Biden supporters gathered outside the yard to catch a glimpse and cheer his arrival.

Cherie Caines, an architectural designer who lives in Kirkwood and waited with her two children in hopes of seeing the Biden motorcade, said she was excited that Georgia had turned blue.

“Anything he says is better than what we’ve been hearing for the last four years,” she said. “I think the decision’s already been made. Honestly, I don’t know if anything he said is going to change anyone’s opinion.”

Milton Alston, 50, a semiretired IT support worker who drove to Atlanta from neighboring Gwinnett County, said he was more optimistic than many Democrats. “I’m getting sick of hearing everybody saying it’s a foregone conclusion and both our candidates will lose,” he said.

While Georgia Democrats have advised some Democratic leaders, like California Rep. Judy Chu, not to come to Georgia — it’s best, they say to have local figures do the persuading — they have not distanced themselves from more liberal figures, like Vermont Sen. Bernie Sanders.

Last month, Ossoff told CNN that he and Sanders had not discussed whether Sanders would go to Georgia to campaign with him but that he welcomed Sanders’ support.

“His advocacy for ensuring that healthcare is a human right in this country, for putting the interests of working families over corporate interests is welcome, is necessary, is appreciated,” Ossoff said. “And so is his support.”

Biden is trying to help Ossoff and Warnock in a variety of ways. About 50 staffers from the Biden campaign team have been sent to work in Georgia to help with organizing, outreach to key constituencies, and other voter contacts — especially in the Atlanta suburbs and other areas where Biden did well in November, a Biden official said. In addition, the official said, the Biden campaign and the Democratic National Committee have raised nearly $10 million so far for Ossoff and Warnock.

Biden’s welcome by the candidates stood in contrast to President Obama’s reception in Georgia not many years ago, when the state was more conservative-leaning than it is today. In 2014, when Jason Carter — son of former President Carter — was running for governor, he kept his distance from Obama, even when the president came to Atlanta to give a speech on the Ebola virus.

“He ran for governor and away from Obama — that was the norm not long ago,” said Charles Bullock, a political scientist at the University of Georgia. “Georgia Democrats knew that … you did not want to be within the width of a camera lens of a national Democrat.”

Thurmond, the county executive, recalled that when Obama visited in 2010, when Thurmond was a U.S. Senate candidate, he may have been the only state-level Democrat who appeared at the president’s event.

“It wasn’t personal. It was just, politically, it was not a good move at the time,” Thurmond said, “But thank God, things have changed dramatically since then.”