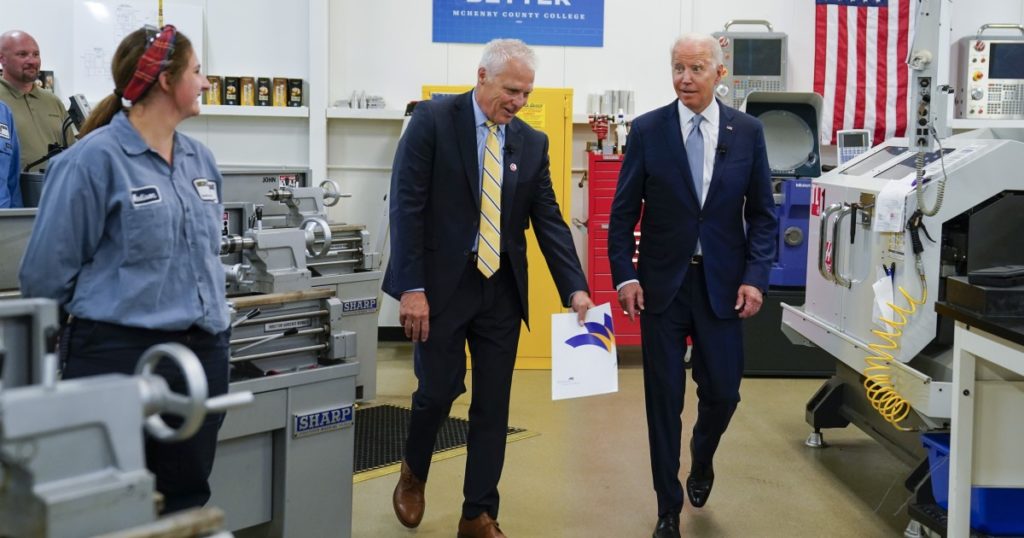 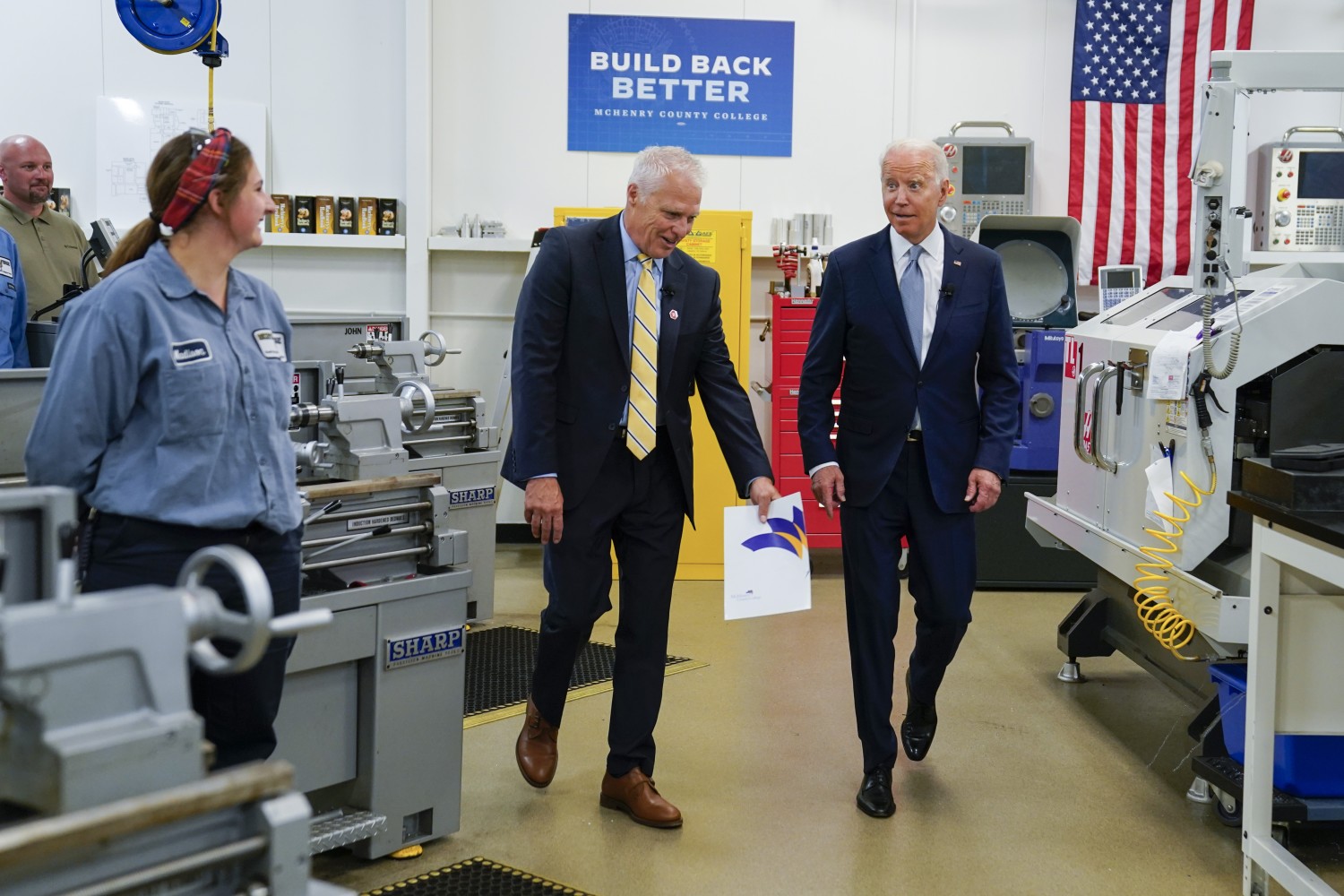 President Biden’s visit to suburban Chicago on Wednesday was like a number of his recent trips — to a politically competitive district where he could promote both his domestic agenda and his party’s prospects in next year’s midterm election.

In Crystal Lake, Ill., a conservative enclave in the blue state, Biden toured a lab and day-care facility at McHenry County College and spoke to a couple hundred people about his proposed federal investments in workforce training, community college costs, and preschool and child-care subsidies. He also put in a plug for the area’s congresswoman, a top Republican target.

“This woman here, hang on to her,” Biden said, looking at his side to Democratic Rep. Lauren Underwood.

This was Biden’s third such visit to a House battleground in eight days, as the White House has married the president’s summer sales pitch for his infrastructure plans in Congress to Democrats’ political spadework ahead of the 2022 election.

He traveled last week to La Crosse, Wis., represented by Rep. Ron Kind, one of just six Democrats to win last fall in congressional districts where former President Trump edged Biden. There he sought to build support for his bipartisan agreement with a group of Republican senators to invest $1.2 trillion over eight years in traditional infrastructure projects. And Biden spent Saturday celebrating the country’s progress against the coronavirus during a visit to a cherry orchard in Antrim County, Mich., in the district of Rep. Jack Bergman, a Republican whom Democrats would love to unseat after Biden fell just short of winning the area.

Former Rep. Steve Israel (D-N.Y.), who chaired the Democratic Congressional Campaign Committee from 2011 to 2015, said Biden’s broad appeal makes him a political asset for his party: “When I was chairman, we had some national Democrats we’d send to bright blue districts to rev up the base and others we’d send to purple districts to appeal to moderates. Biden was effective in both.”

Biden’s appearances in swing districts, in Israel’s view, are crucial for Democrats to retain control of Congress — but only if he succeeds in selling his agenda.

“Democrats are going to keep or lose the majority based on their ability to win in about 16 swing districts,” Israel said. “If a Democratic agenda is viewed popularly in those districts, they’ll hang on to the majority. Having a popular president with popular ideas appearing in those places is a win-win.”

Jen Psaki, the White House press secretary, told reporters Wednesday that the president’s visit to Underwood’s district was “in part because [she] is a registered nurse” and an advocate for the healthcare expansion Biden seeks as part of his second, “human infrastructure” proposal, which Republicans oppose.

In a speech at the college, Biden — “explainer in chief,” Psaki dubbed him — said the federal government, by subsidizing two years of both preschool and community college, would help working families and boost the economy in the long run.

“To truly deal everybody in this time, we need to invest in our people,” he said, drawing a contrast with the tax cuts under the Trump administration that mostly benefited wealthy households and corporations.

And he was blunt about the benefits of extending a new child tax credit: “You’ll get cash.”

Biden has emphasized his commitment to bipartisan lawmaking even as he seeks to preserve his party’s shaky grip on power. The president and his team figure that Biden, and Democrats more broadly, will benefit politically from both his apparent willingness to work with Republicans — a break from his predecessor’s hard-edged partisanship — and his ability to sell a sweeping progressive agenda.

“The things he’s talking about are already popular, and they’re even more popular when people don’t see them as being a ‘Democrat’ or ‘Republican’ proposal,” said a senior administration official, who spoke on the condition of anonymity.

Publicly, the White House has brushed aside questions about the midterm election, which typically doesn’t go well for a president’s party. When a reporter asked Tuesday whether gas prices could “become a political issue that could be damaging to the president and his party in the coming election,” Psaki scoffed. “In 18 months, 17 months?” she said. “OK.”

Yet the White House’s early focus on pushing policy in key House districts reflects Democrats’ confidence in the popularity of their agenda as well as their trepidation that losing control of Congress would greatly limit their power in the second half of Biden’s term.

“Most presidents don’t use the odd-numbered year, but Biden has changed the calendar,” said Democratic pollster Peter Hart, who shares the concern that Republicans could triumph in 2022. “Democrats are going to have a very hard time holding the House and Senate, and there’s no time to waste.”

Republican consultant Alex Conant called the 2022 midterm election “a toss-up” and said Biden was smart to make early efforts in competitive districts. “I don’t think anyone can predict what the issues will be next year,” he said. For Democrats, he added, “their best hope of keeping their majorities is by getting started early.”

Jeremy Rosner, another Democratic pollster, agreed that forecasting the midterm election is harder than normal. He cited unprecedented factors such as the ebbing COVID-19 pandemic and the fallout of the Jan. 6 insurrection, as well as potentially strong economic growth — all of which could disturb the historical trend of presidents seeing their party lose ground in midterm elections.

Biden’s travel also suggests at least glancing attention to 2024 and his potential reelection bid. Saturday’s trip to Michigan was his third visit to the battleground state since taking office.