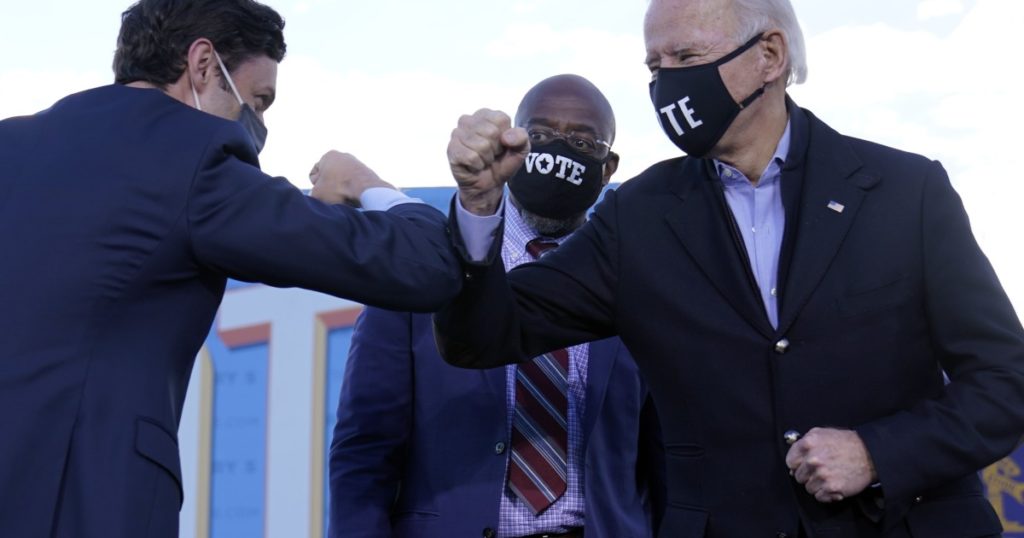 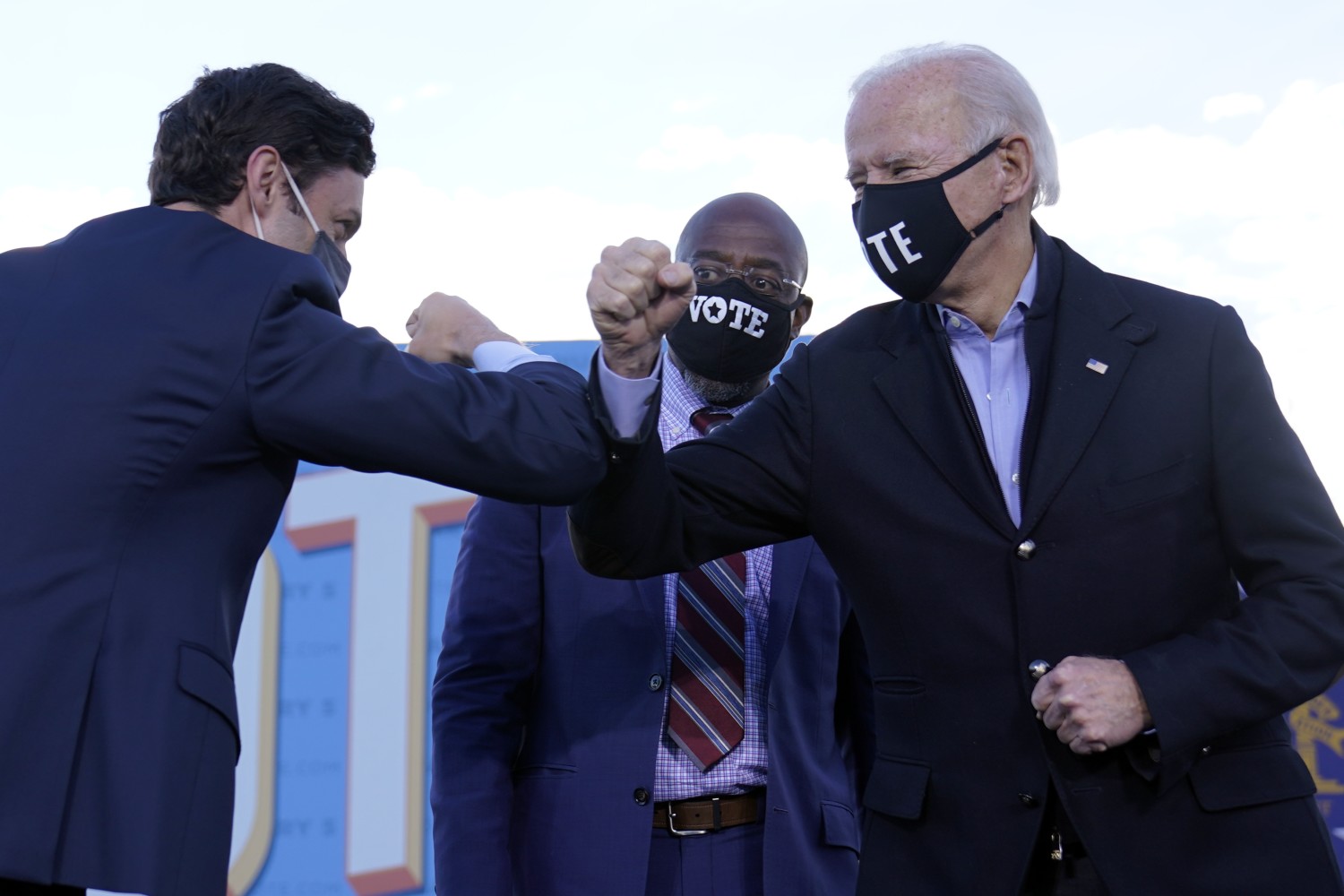 On the eve of a special election that will shape the course of Joe Biden’s presidency, he parachuted into Georgia on Monday just hours ahead of President Trump as each sought to appeal to voters who will decide which of their parties controls the Senate.

Their dueling rallies come as Georgians neared Tuesday’s final chance to cast ballots in two special elections for Senate seats currently controlled by Republican incumbents David Perdue and Kelly Loeffler. If either of them wins, the GOP will continue to control the chamber by a slim margin, empowered to stymie Biden’s policy agenda and potentially block confirmation of his appointees.

Both Democrats must win in upsets to produce a 50-50 Senate split that would make Kamala Harris, as vice president, the tiebreaker and give their party control.

The unusual special election had long seemed to favor the Republicans but was considered a toss-up by the last hours; heavy early voting seemed to favor Democrats. Trump’s attacks on the November election results — and on his own party’s leaders in Georgia for validating Biden’s victory there — were threatening to undermine Republicans’ chances of holding the Senate.

“The whole nation is looking to you to lead us forward,” Biden said at a late afternoon rally in Atlanta, where he implored Georgians to turn out for Democrats Jon Ossoff and the Rev. Raphael Warnock. “The power is literally in your hands. Unlike any time in my career, one state can chart the course not just for the next four years, but for a generation.”

Biden stressed that his ability to follow through on plans for confronting the pandemic hinges on what Georgians decide, and he promised that the $2,000 relief payment that congressional Democrats unsuccessfully sought would become a reality if Ossoff and Warnock prevail.

Shortly before Biden took the stage before hundreds of cars at a drive-in rally near the 1996 Olympic torch, an official from the office of Georgia Secretary of State Brad Raffensperger sharply and publicly rebuked Trump for his brazen effort to bully Raffensperger into overturning the will of Georgia voters, who narrowly favored Biden in the November election. The news conference by Gabriel Sterling, the Republican who oversees Georgia’s voting systems, came the day after the leak of an extraordinary one-hour phone call Saturday in which Trump urged Raffsenperger to find enough votes for him to nullify Biden’s win.

One by one, Sterling angrily debunked the president’s conspiracy theories alleging fraud in the Georgia election two months ago, and he condemned Trump’s pitch to reverse the result. “Every one of these claims is false, and yet the president persists,” he said.

The president’s request, recorded by Raffensperger’s office and shared with journalists, moved some Democrats in Congress to call for a criminal investigation. And it had the four Senate campaigns scrambling to assess the impact on the special election. Republicans worried that the president’s repeated false claims that November’s election in Georgia was fixed would convince them it wasn’t worth their effort to cast ballots.

Raffensperger told NBC News that he didn’t know how the recording of his call with Trump was leaked but said, “We’re better for it.”

“Now everyone can listen to the whole one-hour, eight-minute call with the president. But at the end of the day, what he said was not factually correct. And I want to make sure that people understand the facts,” Raffensperger said, adding, “You can’t keep on taking shots from people and people keep putting out stuff that’s not true. And we’re going to respond.”

Perdue tore into Raffsenperger for recording the call, saying on Fox News that it was a “disgusting” move.

“I guess I was raised differently,” said the senator, who is in quarantine after exposure to COVID-19 and planned to appear “virtually” at the Trump rally in Dalton. “To have a statewide elected official, regardless of party, tape without disclosing a conversation — private conversation — with the president of the United States, and then leaking it to the press is disgusting.”

But Sterling made no apologies, telling reporters that the president routinely misrepresented conversations after the fact, and that it was appropriate for Raffensperger to create a record of what was actually said.

Biden and many Democrats proceeded cautiously. Some in Congress argued against continuing to focus on holding Trump accountable just weeks before he is to leave office. After the Democrats’ disappointing showing in November in races for Congress and state offices, some worried that moving to punish the president would alienate swing voters who want to move on from Trump, as Biden has promised, rather than see his party try to exact political revenge.

At the rally, Biden did not mention Trump’s call to Raffsenperger. He instead referred more vaguely to the president’s general efforts to subvert the election outcome, and to his demands of complete loyalty from senators like Loeffler and Perdue as he pursues baseless claims of fraud.

“Politicians cannot assert, take or seize power,” Biden said. “Power is given, granted by the American people alone. We can never give that up. It is always the will of the people who must prevail.”