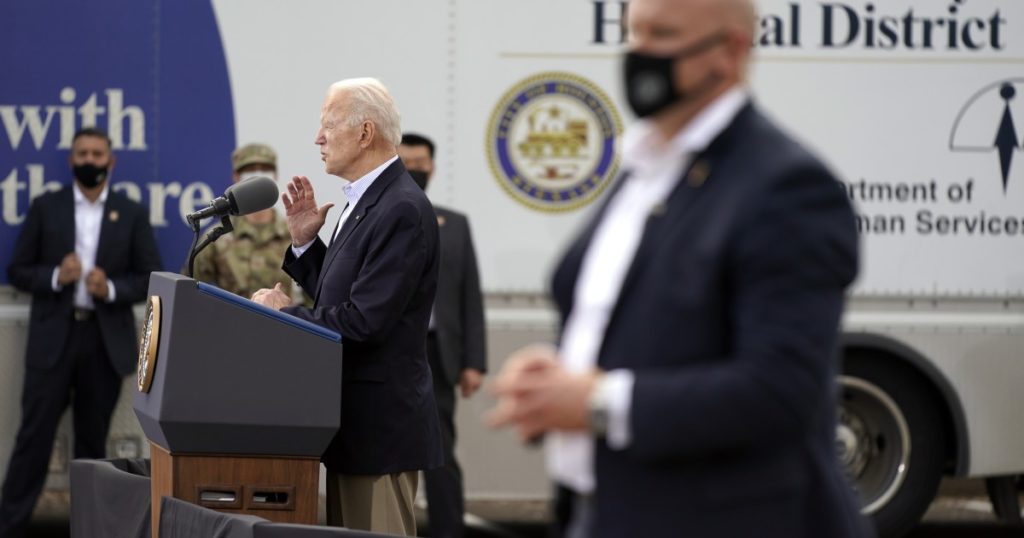 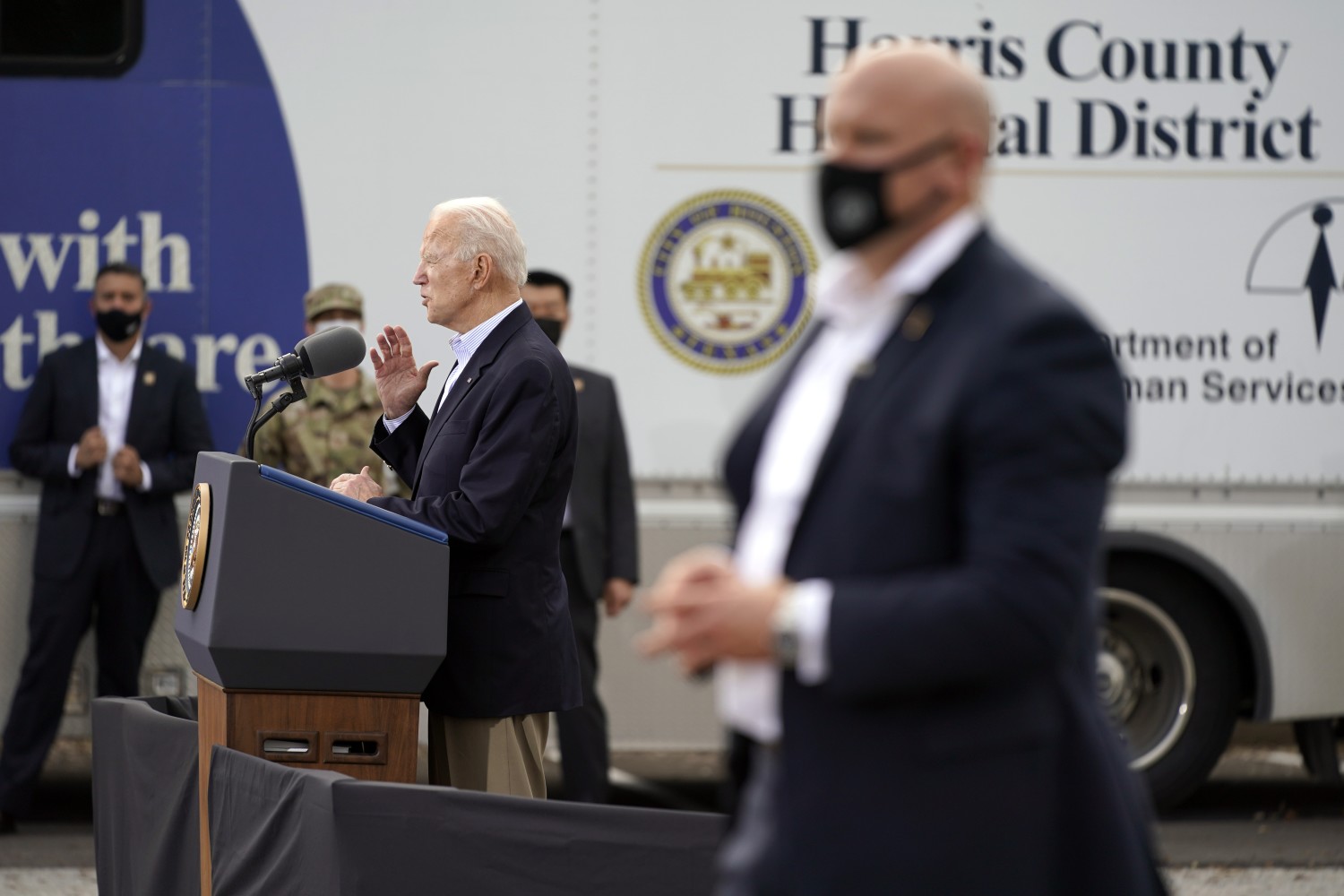 After touring damage from the deadly winter storm that paralyzed Texas last week, President Biden — joined by several of the state’s top Republican and Democratic political leaders — used the first disaster visit of his presidency on Friday to call for unity.

“When a crisis hits our states, it’s not a Republican or Democrat who’s hurting. It’s a fellow American who’s hurting,” Biden said as he concluded his trip at a federal COVID-19 vaccination site in Houston. “My prayers are with you in the aftermath of the storm…. We will be true partners to help you cover the bill for the storm and this pandemic.”

Biden received a warm reception in a conservative state where he made election inroads but where Democrats still lost many state and local races, especially outside the state’s largest cities, which lean Democrat. Among registered Texas voters, 45% approve of the job Biden’s doing and 44% disapprove, according to a poll this month by the University of Texas and the Texas Tribune. The divide was largely along partisan lines: 80% of Republicans disapproved while 89% of Democrats approved. The poll’s margin of sampling error was plus or minus 2.83 percentage points.

“He’s coming for all Texans, for people like myself who were without power,” said Douglas Brinkley, a president historian at Houston’s Rice University, prior to Biden and First Lady Jill Biden arriving at Ellington Field Joint Reserve Base. “It’s a symbolic gesture.”

Biden’s appearance, in which he emphasized a sense of empathy for victims of all stripes, stood in contrast to former President Trump’s first presidential visit to a disaster area, also Houston, after Hurricane Harvey in 2017. Trump did not meet with storm victims during the trip, and when he returned four days later, urged people who had relocated to a shelter to “have a good time.”

Trump acted in a similar manner months later while visiting storm victims in Puerto Rico after Hurricane Maria, tossing some of them rolls of paper towels, and in California last year, when he critiqued state officials’ forest management during a visit to wildfire-ravaged areas.

Texas was ill-equipped last week to handle days of subzero temperatures, which led to at least 50 deaths in the Houston area alone and left millions without power and drinking water due to burst pipes and other storm-related damage. The state’s independent power grid that serves its largest cities — the only one not connected to other major U.S. grids — crashed.

Houston Mayor Sylvester Turner, a Democrat whose own home lost power during the storm, said the scale of the disaster was difficult to fathom.

“For a lot of these homes, you’re not going to be able to see it from the outside because the damage for the most part is on the inside,” from burst pipes and flooding, Turner said as he waited to greet the president and first lady. “The recovery still exists, still needs to occur in people’s homes.”

Texas pride also took a major hit from the historic storm. Friday was Go Texan Day, the annual launch of the Houston Livestock Show and Rodeo, but the virtual event was lost on many still recovering from the storm. About a million Texans still lacked drinking water this week, 57,000 in the Houston area. Some were also scrambling to find food after the storm disrupted supply chains. They are relying on agencies like the Houston Food Bank, where Jill Biden helped pack food with Texas First Lady Cecilia Abbott before rejoining the president at the vaccination site.

Last week, Biden signed a disaster declaration for much of Texas and state leaders were lobbying Friday to expand the scope.

W. Nim Kidd, chief of the Texas Division of Emergency Management, showed Biden a state map with large areas not yet covered by the federal disaster declaration.

“We’ve got a long way to go. Mr. President, I know we can get through this together, and we’ve just got to keep going,” Kidd said.

Biden was accompanied Friday by elected officials including Republican Gov. Greg Abbott and Sen. John Cornyn. Republican Sen. Ted Cruz, who faced a backlash last week after leaving Texas amid the storm for a family vacation to Cancun, was notably absent — attending a conservative political conference in Florida. White House press secretary Jen Psaki said Cruz didn’t ask to join the president in Houston, nor was he invited.

“The president has made very clear to us that in crises like this, it is our duty to organize prompt and competent federal support to American citizens, and we have to ensure that bureaucracy and politics do not stand in the way,” Homeland Security Advisor Liz Sherwood-Randall said during the trip.

Criticism of the storm response in Texas has centered on the state’s independent electrical grid, specifically weatherization. Many believe state leaders mismanaged the storm response, with six members of the board that manages the power grid resigning this week. The Texas Legislature has started public hearings, where lawmakers have grilled officials responsible for running the power system.

Sherwood-Randall said it’s up to Texas to address its overarching problems.

Texas Democratic Party Chair Gilberto Hinojosa has called for Gov. Abbott to testify at the hearings “to answer: Why were our folks left to freeze?” Abbott initially blamed outages on green energy sources, and just weeks before the storm he had ordered state agencies to find ways to sue the Biden administration over energy regulation.

On Friday, Hinojosa thanked Biden “for providing immediate and tangible relief to millions of Texans who have been suffering not only due to the recent winter storm but from the COVID-19 pandemic. The president’s visit today provided a bipartisan promise to help our fellow Texans in meaningful ways that will improve and save lives.”