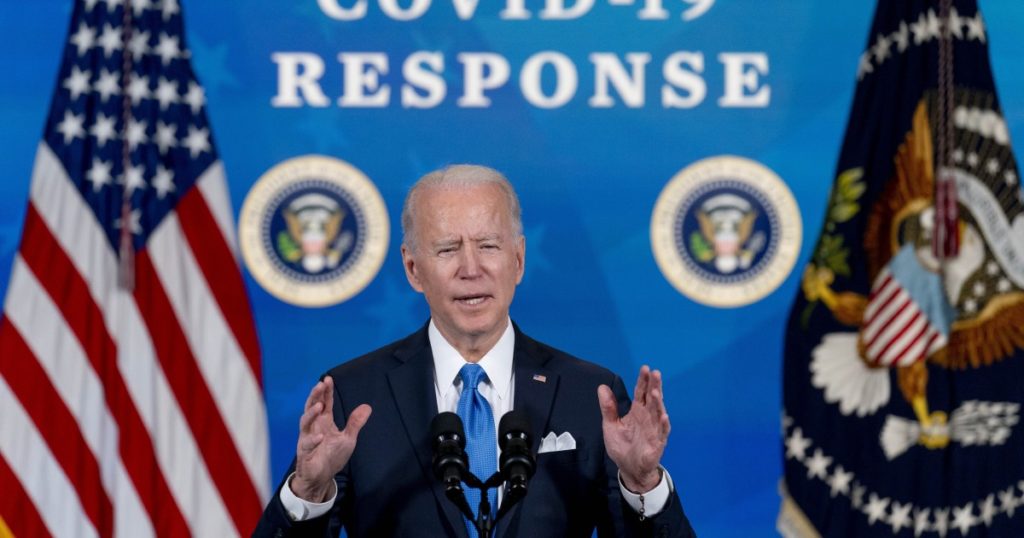 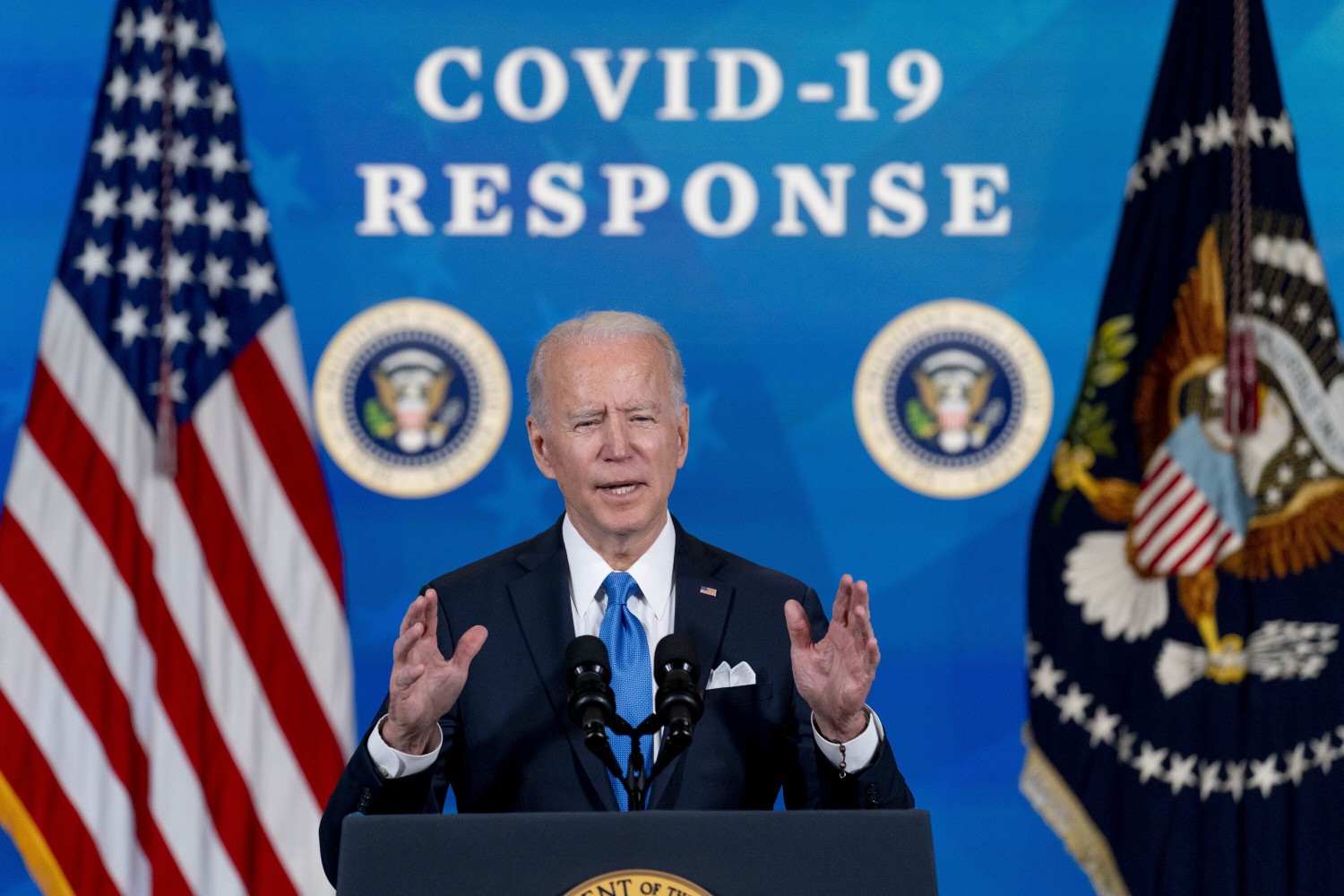 After a grim winter that saw the U.S. death toll from COVID-19 rise past half a million, President Biden will seek to foster — and benefit from — a national surge of optimism about the pandemic, the economy and the country’s condition in a White House speech Thursday evening.

The president is expected to say that by May 1, all American adults will be eligible to sign up for a vaccination appointment and get their first shot by the end of that month, a senior administration official told reporters. By July 4, Americans should be able to gather in at least small groups, the official said, speaking under rules that did not allow identification by name.

Some 4,000 additional troops will be deployed to help with the vaccination campaign, and the federal government will launch a website and call center to help people find appointments, the official said.

The president’s upbeat tone will mark a notable pivot for Biden, who in December warned that the “darkest days in the battle against COVID are ahead of us” and since then has repeatedly downplayed expectations for his administration’s progress.

Biden is scheduled to speak hours after signing into law a $1.9-trillion recovery package that his administration says will speed the pace of COVID-19 vaccinations, help get schools reopened safely and deliver significant amounts of financial aid to low- and middle-income families. The speech, his first in prime time from the Oval Office, will also mark the one-year anniversary of the World Health Organization’s declaration of COVID-19 as a pandemic.

In a brief Oval Office signing ceremony — a larger celebration will come Friday — Biden said the relief package was about “rebuilding the backbone of this country.”

The law will provide $1,400 payments to most Americans in the next few weeks, with the first wave landing in bank accounts as early as this weekend, White House Press Secretary Jen Psaki said Thursday.

It will also achieve a list of Democratic goals, including creating for one year a near-universal child benefit that experts project will cut the child poverty rate nearly in half.

The law will reduce the overall poverty rate by more than one-third in the coming year, according to a new analysis from the Washington-based Urban Institute. That would be by far the largest single-year drop in poverty in the last decade and one of the biggest in modern U.S. history.

Enactment of the law marks a significant victory for Biden — the package emerged from Congress at roughly the same size he proposed in January, its major components intact with the exception of an increase in the federal minimum wage, which Senate rules dictated be handled separately.

It came on the 50th day of his presidency, as the White House could also celebrate the approval of most of Biden’s Cabinet — Atty. Gen. Merrick Garland, the 16th official confirmed by the Senate, took the oath of office Thursday afternoon — and a rapid increase in the number of Americans vaccinated. Roughly 1 in 4 U.S. adults have now received at least one shot.

The speech marked the start of at least a week of events in which Biden and other top officials will seek to highlight elements of the new law — something he said last week President Obama had not done enough of in 2009, after passage of his economic stimulus law.

Biden is scheduled to travel next week to the Philadelphia suburbs — a traditionally Republican area where he had strong appeal among moderate voters, while Vice President Kamala Harris hits the swing states of Colorado and Nevada. The two have a joint appearance scheduled for the end of next week in Atlanta, another politically crucial locale.

At each stop, administration officials are expected to emphasize how Americans can access the aid provided under the new law, and also to dispense a commodity that’s been in short supply over the last year — optimism.

Biden hopes to “provide some hope on what’s ahead,” Psaki said. “We are still in the middle of a war with the pandemic.” But, she added, he “wants to give people a sense of what’s possible” and “what we can look forward to.”

The hopeful tone stands in sharp contrast with his presidential campaign, in which Biden hewed to a sober approach designed to draw a sharp contrast with President Trump’s downplaying of the disease, which many voters found cavalier. Biden also lowered expectations, allowing him to under-promise and over-deliver, a classic path to success that his predecessor often didn’t follow because of his tendency to oversell.

In recent weeks, however, Biden and his administration have increasingly struck a sunnier note. The shift began just over a week ago when Biden announced that the country would have enough vaccine to give shots to all adults by the end of May.

“Every day the number of vaccines goes out, and when you have that kind of visible forward progress, it’s hard to argue against it,” said Donna Edwards, a former Democratic member of Congress from Maryland.

Thursday, in advance of Biden’s speech, Rochelle Walensky, his appointed head of the Centers for Disease Control and Prevention, also sounded more optimistic in a statement on the pandemic’s anniversary.

“The vaccination of millions every day gives me hope,” Walensky said. “Hope that we can beat this pandemic. And hope that we can get back to being with our family, friends and community. And soon.”

That change is something that several Democratic strategists have been urging.

“They’ve been a bit too negative,” said Democratic pollster Anna Greenberg. “Some optimism from him would be good.”

The approach matches a growing public mood. Although Americans remain guarded about how quickly the country can return to normal, a new Gallup poll showed the share of Americans expressing satisfaction with their lives recovering nearly to pre-pandemic levels.

Republican strategist Sarah Longwell has seen that shift in focus groups she’s conducted with voters who backed Donald Trump in 2016 then switched to Biden last year.

In 2020, “when I asked the question, ‘How do you think things are going in the country?’ the answers were brutal,” Longwell said. People would talk about friends or family members dying and not being able to visit them or about people being laid off, she recalled.

By contrast, at her latest group, six people in a row “all said, ‘I’m feeling pretty good. I think things are headed in the right direction,’” she said.

“There’s a sense of being on the cusp,” Longwell added. And while voters remain skeptical of political promises, “checks landing in people’s mailboxes” are the sort of thing likely to get attention.

Biden’s promotional task is in several ways easier than the one Obama faced a decade ago. In Obama’s case, the Great Recession was still deepening through much of his first year in office — unemployment did not peak until October 2009. Voters at the time were also extremely skittish about risk, said Joel Benenson, who was Obama’s pollster.

That wariness significantly limited the size of any program the country would support, he said. It also gave the Republicans ground from which to attack Obama’s proposals.

By contrast, Biden’s way has been eased by the inability of Republicans so far to develop effective attacks on his legislative package.

In time, that will change, said Greenberg. “You can see the Republicans flailing around,” but with a legislative package this big, “inevitably, there will be something.”

For now, however, the bill “just hasn’t stirred the sort of opposition that Obama’s stimulus did,” said Republican strategist Alex Conant.

All that is reflected in polls that show the legislation supported by around 70% of the public. Biden’s own approval rating is not at quite such a lofty level and probably never will be, given the nation’s intense political polarization.

“The days of 57%, 58%, 59% approval ratings are probably gone,” said Benenson. “Social media has served to just completely balkanize the country.”

But Biden has maintained a steady majority of the public behind him. A poll released Thursday by the nonpartisan Pew Research Center found 54% of the public approving of Biden’s job performance so far, with 42% disapproving.

The poll also showed 65% of the public confident that Biden can effectively handle the COVID-19 pandemic.

The president’s approval rating matters, giving him greater clout with Congress and shaping the political landscape for the midterm election in 2022. How much higher Biden’s approval can go remains unknown, but the passage of the relief package gives him a strong jumping-off point.

For the still-new president, that could be a winning combination.