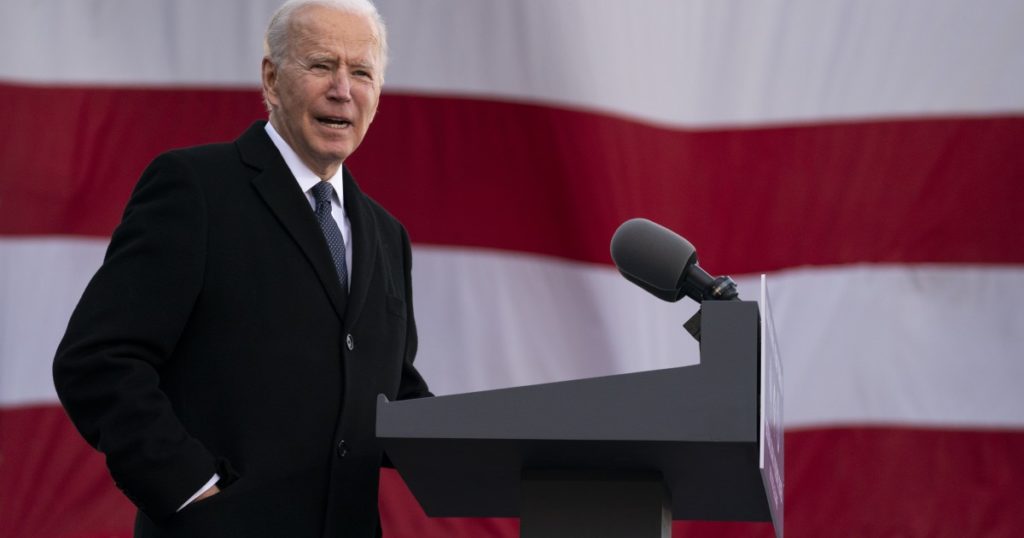 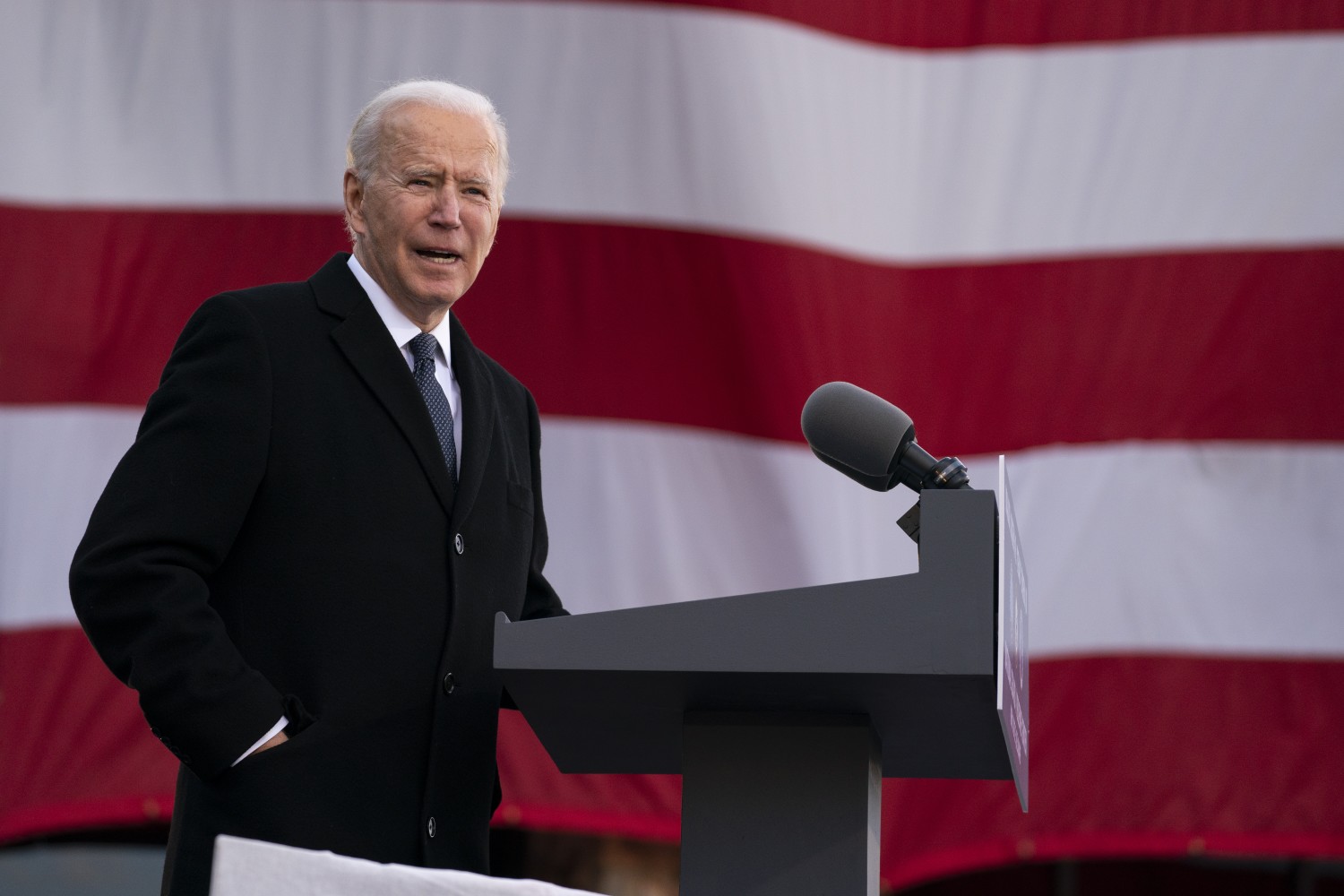 President Biden began to fill the top posts at the Homeland Security Department on Monday, ranks hollowed out by his predecessor amid unprecedented politicization and record vacancies. Almost all have California ties.

With roughly 21,000 unaccompanied migrant children in federal custody as of Monday — including some 3,000 in ill-suited, overcrowded holding cells near the border — nominees to lead immigration and border enforcement agencies immediately face an additional daunting, if familiar, challenge.

ASeveral of Biden’s picks were long expected. But a few nominations — such as Tucson Police Chief Chris Magnus, a onetime California cop, for commissioner of Customs and Border Protection — were more unconventional.

Biden’s nominees, announced Monday by the White House, would fill posts that reflect the broad mission of the federal government’s third-largest department. In addition to the commissioner for CBP, which oversees the U.S. Border Patrol, Biden also selected heads for U.S. Citizenship and Immigration Services, charged with overseeing asylum cases and the legal immigration system; and the director of the Cybersecurity and Infrastructure Security Agency, or CISA, which safeguards elections.

One particular omission was notable. As Biden works to roll back former President Trump’s immigration crackdown, he has yet to name a director for one of DHS’ most high-profile divisions: Immigration and Customs Enforcement, Homeland Security’s interior enforcement agency.

John Sandweg, former acting ICE director and general counsel at Homeland Security, said that although it’s important that the top post at ICE be filled, CBP and USCIS “are the priority.”

“They are the DHS components hit hardest by the border surge,” he said.

Some half a dozen federal judges and the Government Accountability Office ultimately found several of Trump’s appointments for Homeland Security leaders to be unlawful. The Biden administration has resisted calls from progressive wings to disband or dismantle Homeland Security, Border Patrol and ICE, and instead pledged better training and oversight for agents and officers.

With Republican lawmakers, in particular, heading to the border almost weekly for a backdrop to their criticisms of Biden’s immigration policy, some of his nominees may face a confirmation fight in Congress.

Homeland Security Secretary Alejandro N. Mayorkas, the first immigrant and first Latino to serve in the Cabinet post — who faced his own opposition on the Hill — praised the picks Monday, calling them “an extraordinary group of individuals for critical leadership positions.”

Here are some of Biden’s top picks on immigration and security:

Although past heads of CBP — one of the largest law enforcement agencies in the world — have tended to have decades of experience in federal law enforcement, Magnus has a long career as a police officer outside Washington.

Currently serving as police chief in Tucson, a southern Arizona city near the U.S.-Mexico border, he has also worked in as broad a swath of the United States as Lansing, Mich.; Fargo, N.D.; and Richmond, Calif., before the Arizona post.

In 2006, when the Richmond City Council was debating whether to declare an emergency over a rising homicide rate in the refinery town across the bay from San Francisco, the city brought in Magnus to serve as its police chief, the son of an art professor and a piano instructor, who was known as a proponent of community policing techniques. When he took the job, he pledged he would personally visit the scene of every homicide, The Times reported then. After a decade with Magnus as chief, Richmond recorded its lowest homicide rate in more than 30 years.

Five years before the death of George Floyd in Minneapolis last spring spurred worldwide protests over racial injustice and renewed debate over police reform, Magnus held a “Black Lives Matter” sign alongside community members demonstrating in the wake of unrest in Ferguson, Mo. — and the Richmond Police Officers Asson. accused Magnus of illegally participating in political activities while in uniform.

He said he was paying respect to “the very real concerns of our minority communities.”

The White House on Monday said Magnus has a reputation as a “progressive police leader” known for “evidence-based best practices” and “insisting on police accountability.” The administration also highlighted his 15-year marriage to husband Terrance Cheung, and his family history as the son of an immigrant from Norway.

If confirmed, Magnus will join predecessors at CBP under the Trump administration who were also connected to California, though they had near-opposite priorities from the current White House.

Mark Morgan, Trump’s last commissioner, a former Marine, FBI agent and Los Angeles Police Department officer, served as Border Patrol chief for six months under President Obama, and was in fact fired by Trump shortly after his inauguration. Once he became a fixture on Fox News, the Trump White House brought him back to lead ICE, and ultimately, CBP — in an acting capacity. He increasingly played the role of attack dog for Trump’s political agenda on immigration, as he continues to do.

Morgan followed Kevin McAleenan, a lawyer and former Obama administration official tapped as acting Homeland Security secretary after one of many ousters at the department during Trump’s administration. Raised in Los Angeles, McAleenan joined CBP and worked on counterterrorism programs and served as director for Los Angeles International Airport before heading to Washington.

Notably, both helped implement some of Trump’s most controversial policies, from family separation to Remain in Mexico, as they faced sharp increases in migration to the southern border, in particular by Central American families. The numbers then rivaled those of Biden’s first months, which Magnus would confront.

Given Tucson’s closeness to the border, the Biden administration said of Magnus, “he has extensive experience in addressing immigration issues.”

Ur Jaddou
Nominee for Citizenship and Immigration Services director

Born and raised in Chula Vista, Calif., Jaddou is a well-known immigration lawyer and former aide to California Rep. Zoe Lofgren, (D-San Jose). She most recently served as director of DHS Watch, an accountability project at America’s Voice, a nonprofit immigration advocacy group.

If confirmed, Jaddou will be charged with carrying out Biden officials’ promises to speed up asylum processing, echoing past pledges to hire more asylum officers and streamline applications and interviews, even as growing numbers of Central American families arrive at the border.

Although many migrants are being quickly expelled under a Trump-era pandemic policy without a chance to claim asylum, today, applying for the protection takes almost two and a half years on average. Biden inherited from Trump a record backlog of 1.3 million cases in immigration courts.

It’s a challenge familiar to Jaddou, also an adjunct professor at American University. She was chief counsel at USCIS during the Obama administration, which too saw spikes in primarily Central American families and lone migrant kids migrating north.

“Ur is the seven-time Oscar winner star out of central casting for this job,” said Rodriguez, the former USCIS director.

Prior to her time at USCIS, Jaddou served as counsel to Lofgren, who herself is a former immigration attorney, as well as at the State Department. She holds a master’s degree from Stanford University and a law degree from UCLA.

Jaddou, too, is the daughter of immigrants, according to the White House: Her mother is from Mexico, and her father is from Iraq.

Ali Noorani, president of the National Immigration Forum, a nonpartisan immigration advocacy group, said Jaddou and Biden’s other picks “will bring needed leadership to parts of the administration that have their work cut out for them.”

With hyperfocus on the border and political debate over immigration, the public — and many politicians — tend to overlook the other aspects of Homeland Security’s mission.

Yet the department is also grappling with the deadly attack on the U.S. Capitol in January, domestic extremism as a top threat, and what intelligence officials believe to be the most extensive hack ever against the U.S. government. The hack targeted some 250 outside businesses and major federal agencies, according to the intelligence community, which said it suspects the ongoing computer breach to be an “intelligence gathering operation” that originated in Russia.

Enter Easterly, Biden’s pick to lead the Cybersecurity and Infrastructure Security Agency, created in the wake of Russian interference with the 2016 presidential election.

Easterly is charged with “ensuring preparedness and response to operational risks” at Morgan Stanley, according to the administration’s announcement, and led the cyber policy team for the presidential transition.

She previously served as a counterterrorism official at the White House and National Security Agency, and is an Army veteran with more than two decades serving in intelligence and cyber operations.

“CISA has found itself at the forefront of two significant, national cyber incidents in just the last few months,” Rep. John Katko (R-N.Y.), ranking member of the House Committee on Homeland Security, said Monday in response to Easterly’s nomination.

A critic of Biden’s immigration policy, Katko offered rare Republican praise, saying Easterly “brings substantial credibility and a reputation of working productively between government and the private sector to increase the cybersecurity resilience of the nation.”

The last director of CISA, Christopher Krebs, was fired in a tweet. Krebs vouched for the reliability of the 2020 election as Trump continued to promote baseless claims of fraud and refused to recognize Biden’s victory.

Trump said his own appointee’s statements were “highly inaccurate.”