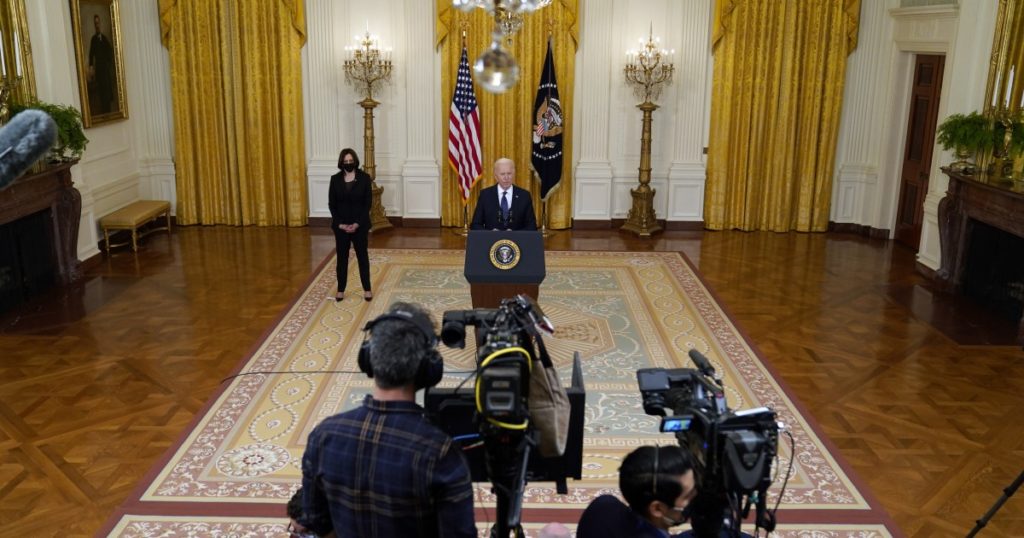 The White House has billed President Biden’s first formal meeting Wednesday with Congress’ “Big Four” leaders, two from each party, as an opportunity to talk about where Democrats and Republicans can find “common ground” on the country’s most pressing issues.

The early signs aren’t good. Last week, Senate Minority Leader Mitch McConnell of Kentucky said he was “100%” focused on stopping Biden’s agenda. And just hours before the White House meeting, House Minority Leader Kevin McCarthy of Bakersfield will lead his caucus’ expulsion of Wyoming’s Rep. Liz Cheney from its leadership because she has publicly condemned former President Trump for his lies that he won last year’s election.

The two Republican leaders’ short drive down Pennsylvania Avenue from Capitol Hill to the White House will be a journey between two realities, one dominated by Trump’s assault on the democratic process and the other rooted in traditional political debates about the role of government in American life. The challenge of bridging that gap has left few optimistic about the possibility for bipartisan dealmaking in Washington.

Not only are many Republicans preoccupied with Trump’s divisiveness and the culture war issues that animate many of their party’s voters, but those lawmakers interested in policy are also staunchly opposed to Biden’s major legislative proposals, in particular the cost and scope of his plans for investing in infrastructure and subsidizing childcare, community college and other expenses for workers and families.

White House Press Secretary Jen Psaki, in her briefing Monday, said Biden, who campaigned on a promise to try to restore bipartisanship to the capital, “believes that the American people did not elect him to accept improbability or impossibility of working in a bipartisan manner. So the role he can play, as president of the United States, is to continue to seek ways to work together.”

And on Tuesday she brushed off questions about what Cheney’s likely demotion meant for the prospect of reaching deals with Republicans. “We’ll let the intraparty squabbling happen at the table” in the Capitol, she said. “And at the table over here — or a smaller table in the Oval Office — we’re going to have a discussion about how we can work together.”

Yet, although Biden outwardly demonstrates an eagerness to work with Republicans, he is hardly naive about the political disincentives in their party that make compromise close to impossible, according to two senior advisors speaking on condition of anonymity.

“He’s not going to give up on this,” one of the advisors said. “But when not a single Republican votes for a COVID relief bill in the middle of a pandemic, it’s pretty clear where they are.”

Also in the White House meeting will be Congress’ two Democratic leaders, House Speaker Nancy Pelosi of San Francisco and Senate Majority Leader Charles E. Schumer of New York, who echoed the White House position on Tuesday, telling reporters that he thinks actions to spur long-term economic recovery must be “big and bold.”

Biden has set some ambitious legislative deadlines. He’s called for Congress to overhaul police practices with legislation that’s named for George Floyd, the Black man killed by a Minneapolis police officer, by the May 25 anniversary of Floyd’s death. Sen. Tim Scott of South Carolina, the Senate’s only Black Republican, said recently that negotiators had made progress.

Also looming is Biden’s push for roughly $4 trillion in spending on infrastructure projects, jobs initiatives, educational programs, social services and more to rebuild the economy. He’s said he wants to see enough progress by Memorial Day on the infrastructure component — including roads, bridges, broadband access, lead-free water systems, clean-energy projects and more — that he can sign a bill into law as early as this summer.

Democrats and Republicans are far from agreeing on how much to spend, what to spend it on and where that money should come from. Biden is seeking at least $2.25 trillion in new investments. Some Republicans responded with an opening offer of $568 billion, much of which is funding already projected in the federal budget. But Sen. Shelley Moore Capito of West Virginia, the Republicans’ lead negotiator on infrastructure plans, has signaled in recent days that her side is willing to go higher.

Although there’s some overlap in the parties’ spending proposals, there’s none on whether and how the costs should be funded.

Biden wants to increase the corporate tax rate to 28% after Trump and a Republican-controlled Congress lowered it from 35% to 21% three years ago. He’s reluctant to simply borrow more money — “I’m not a deficit spender,” he said last week — and he’s refusing to consider Republicans’ idea of “user fees.” Those presumably would raise fuel costs and other fees for drivers, violating Biden’s campaign promise not to increase taxes on any families making less than $400,000 per year.

But Republicans describe Biden’s corporate tax proposal as a nonstarter, and his spending plans as an expensive liberal wish list. “What we see in the first part of this year is pretty radical,” Sen. Joni Ernst (R-Iowa) said to reporters this week.

The White House has refused to say whether Democrats should consider pushing through infrastructure legislation on a party-line vote using the so-called reconciliation process, which allows budget-related measures to sidestep Senate filibusters and pass with 50 votes instead of 60.

“We’re in the early sausage-making stage of the discussion with members of both parties,” Psaki said.

Republicans aren’t the only problem for Biden. A reconciliation maneuver would require unanimous Democratic support in a Senate split 50-50 with Vice President Kamala Harris as tie-breaker, and more moderate Democrats like Sen. Joe Manchin of West Virginia have expressed concerns about Biden’s price tag and taxes. They’re also demanding bipartisanship — underscoring why Biden has to at least make a credible attempt at compromising with Republicans.

Biden met separately Monday with Manchin and Sen. Tom Carper of Delaware, another key moderate Democrat, who supports funding infrastructure projects with user fees. Arizona Sen. Kyrsten Sinema, also a centrist Democrat, visited with the president Tuesday afternoon. On Thursday, Biden is scheduled to meet again with Capito, along with several other Republicans.

In a bit of political gamesmanship, the White House plans to dispatch First Lady Jill Biden to West Virginia that same day, taking the administration’s campaign for its domestic agenda to Capito’s home state.

Early on, Biden was willing to press ahead without Republican support to pass his $1.9-trillion COVID-19 relief package, arguing that it was broadly popular and there was no time to waste amid a deadly pandemic that had roiled the economy.

That’s harder to do with the next phase of his agenda, especially given moderate Democrats’ position. After 36 years as a senator and eight years as President Obama’s vice president, Biden appears pained by his inability to negotiate with — or even truly understand — his political opposition.

“We badly need a Republican Party. We need a two-party system. It’s not healthy to have a one-party system,” Biden said last week. “And I think the Republicans are further away from trying to figure out who they are and what they stand for than I thought they would be at this point.”

He hasn’t been a reliable judge of Republicans before, either.

In 2012, he echoed Obama in predicting of Republicans: “You’re going to see the fever break” if Obama won reelection that year. Yet the second Obama-Biden term saw four more years of polarized politics, followed by Trump’s election.

In 2019, starting his presidential campaign, Biden said the country would see “an epiphany occur among many of my Republican friends” once Trump lost. Instead, about 70% of Republicans question Biden’s election, and the president confronts a nearly united party opposition.

Yet Biden has refused to question the motivations of Republican lawmakers or fire back at their criticism of him. He even made a point of expressing heartfelt appreciation to McConnell in his televised address to a joint session of Congress late last month, recalling how his former Senate colleague named a law funding cancer research for Biden’s late son, Beau.

Just days later, however, McConnell — who famously said in 2010 that his main goal was limiting Obama to one term — made it clear that, his personal relations with Biden aside, little has changed in his partisan approach.

“One-hundred percent of our focus,” McConnell told Kentucky reporters, “is on stopping this new administration.”